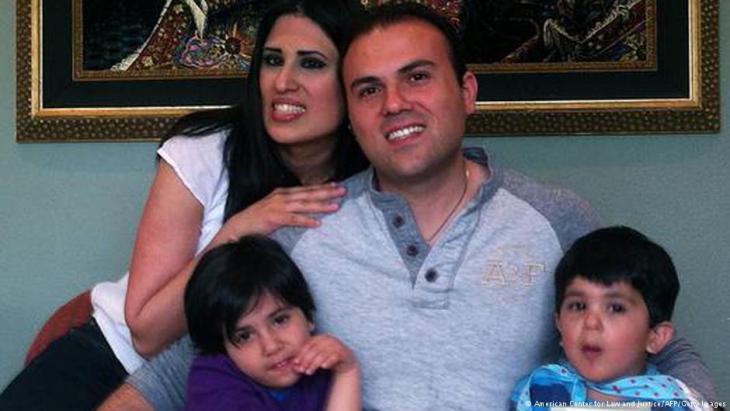 The Iranian-American woman Naghme Abedini has been fighting for her husband's release from an Iranian jail for some time now. He is a Christian convert accused of founding "underground churches" in the Islamic Republic – institutions that are growing ever more popular in Iran. By Thomas Latschan

Her gaze is sharp, her posture straight, her voice calm. When Naghme Abedini speaks of the fate of her husband, Saeed, who is currently serving an eight-year sentence in an Iranian prison, she maintains outward composure. Only when the conversation turns to the conditions that he has to endure, do tears begin to well up in her eyes.

"His father visits him every Wednesday," says the mother of two. "His health isn't good. He is in pain, he's undernourished, has no access to clean water and constantly has to fight illness."

In a letter that Saeed Abedini managed to have smuggled out of prison, he reported being the victim of physical and psychological torture. In addition, he was often told that he would "be hanged" for his Christian faith. A very real possibility, for Saeed is not only a Christian, he is a convert. 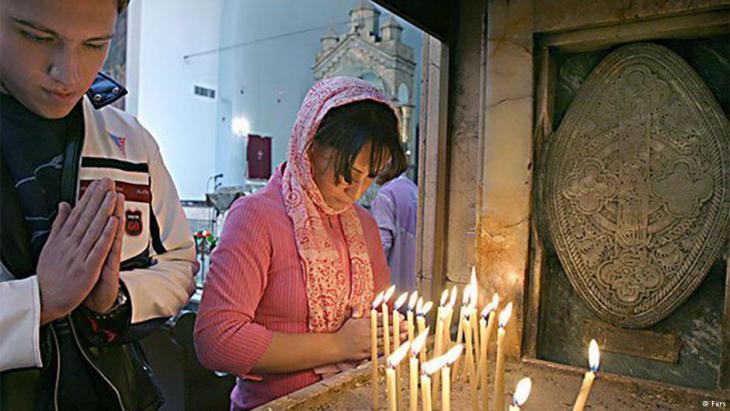 Difficult times for Christians in Iran: Iranian born Saeed Abedini converted to Christianity in the year 2000. Six years later, he and his wife emigrated to the United States. However, he made regular trips back to the Islamic Republic. In autumn 2012, Abedini was arrested and sentenced to eight years in prison for posing a threat to Iranian security. He had organised Christian meetings

A threat to national security?

Saeed Abedini converted to Christianity from Islam in 2000. He did so secretly, as "falling from the Islamic faith" alone can be reason enough for the death penalty in Iran – and almost all other Muslim countries.

Yet more than a few Iranians dare to take the step. It is said that between 250,000 and 500,000 Iranians have converted, though the actual number is impossible to know.

They are turning away from Islam primarily because they are disappointed in their government, which has tied politics and religion together so as to make them inseparable, and has curtailed many civil rights in the name of Islam. Christian converts often meet in so-called "house churches" – private apartments in which they can profess their faith out of the public eye.

Abedini and his wife left Iran to settle in the USA in early 2006. But Abedini regularly travelled back to Iran, where he helped establish underground churches. He was arrested in 2009, but was later released on the condition that he would no longer evangelise.

Abedini, who eventually received US citizenship, continued to engage in social projects in Iran. "He was working with the Iranian government on an orphanage-building project. He travelled there three or four times a year for it, but they didn't let him return from his last trip in July 2012," says his wife, Naghme.

First, Abedini was put under house arrest in Tehran, but then in September 2012, he was taken to Iran's notorious Evin Prison. It wasn't until four months later that charges were brought against him: "He was charged with threatening national security," says Naghme, "because he met with other Christians in private homes, but that had all happened years before." 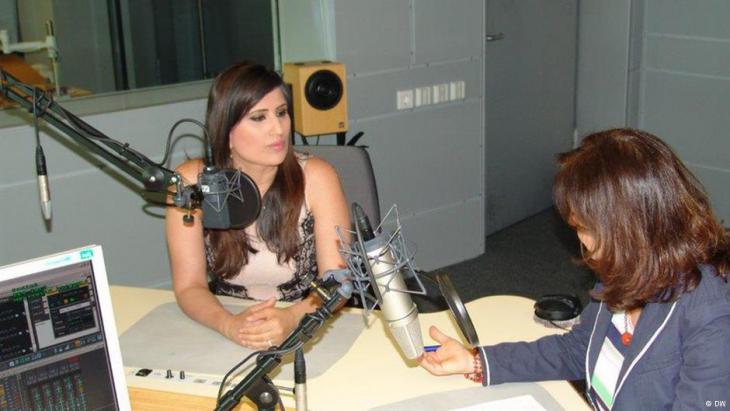 After the imprisonment of her husband, who had allegedly been engaged in the foundation of underground churches in Iran, Naghme Abedini decided to go public. It is known "from other cases that sometimes it can help a prisoner to drag his case into the spotlight," says Abedini

Just prior to that, the Iranian government had made the decision to crackdown more aggressively on religious converts.

"It wasn't until later that we found out the Iranian government had changed their policy toward religious minorities, and above all, toward Christians," says Naghme Abedini. "Responsibility for such cases was handed over from the secret police to the much stricter Revolutionary Guard."

In the spring of 2012, a veritable wave of arrests washed over the country. As a consequence, a number of converts were given death sentences because they had supposedly set up underground churches and were evangelising. Around the time of Abedini's arrest "several public Christian churches that had been open since the Islamic Revolution had taken place were closed," says Naghme Abedini.

"For months Saeed was beaten and interrogated. He wasn't allowed to contact a lawyer. They wanted to force him to confess. It wasn't until the night before his trial that he was allowed to finally meet with a lawyer for a couple of hours. And then he was sentenced to eight years in prison," she says.

Christians haven't had it easy in Iran since the revolution. Officially, they are recognised as members of a religious minority and there are some 600 Christian churches in the country, but people visiting services are registered by the police.

The International Society for Human Rights (ISHR), an NGO, also reports that Christian congregations must agree that they will not engage in missionary work.

Converts garner even harsher repression. A large number of them are in prison, where ISHR says they are often physically and psychologically abused. Much like Saeed Abedini. The family's lawyer in Washington, D.C., who maintains contact with Saed's defense attorney in Iran, suspects that his US passport is the only thing that has saved him from an impending death penalty thus far. 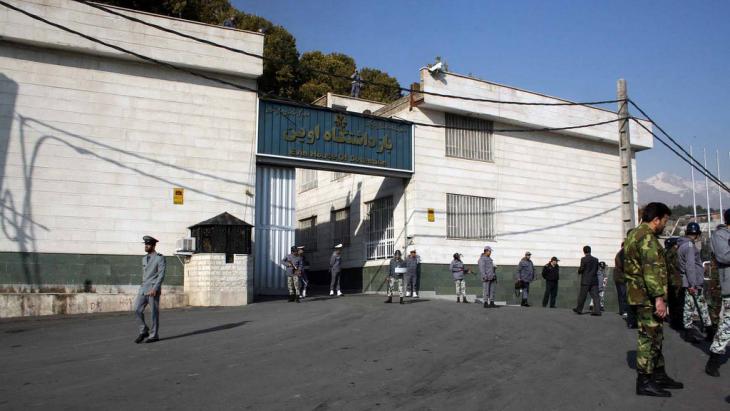 Evin Prison in Tehran, where Saeed Abedini has been incarcerated since his sentencing. His lawyer assumes that it is only his American passport that has saved him from the death penalty so far

After Saeed Abedini's arrest, his wife spent the next three months quietly trying to attain his release. "There is always the fear that by going public, you'll just make things worse," she says. "But his situation kept getting worse anyhow. They were beating him, threw him in solitary confinement, then he became ill. Then I went to the press. We know from other cases that sometimes it can help a prisoner to drag their case into the spotlight. And that the Iranian government would have to be more cautious if the case became internationally known."

Naghme Abedini has been ceaselessly travelling the globe since then, trying to find international political fighters willing to take up the cause of her husband's release. She tirelessly posts appeals on Facebook, gives TV and radio interviews, and presents petitions.

The US Senate has already passed a corresponding resolution, and President Obama has personally demanded his immediate release. This week, Naghme Abedini will speak before the European Parliament and the Human Rights Committee of the German Bundestag.

"Germany was one of the first countries that went before the UN to demand my husband's release, and to criticise his arrest as illegal," she says. "I just hope that I can get someone to pull the right lever. Germany could be a good place for that because it has certain political and economical relations with Iran. Maybe there is someone here that can pick up the phone and manage to call the right people to free my husband."

Home
Print
Newsletter
More on this topic
Turning away from Shia in Iran: ''A tsunami of atheism''Christians in the Middle East: Between co-existence and suppressionIran before the elections: Hunger strikes and love letters
Related Topics
Christianity, Christians in the Islamic world, Democracy and civil society, Freedom of religion, Human rights, Islam and democracy, Converts | religious conversion, Minorities in the Muslim world, Rule of law
All Topics

German Middle East analyst Guido Steinberg and television journalist Ulrich Tilgner have both published new books on the conflicts in the Middle East. Their analyses and their ... END_OF_DOCUMENT_TOKEN_TO_BE_REPLACED

On 27 March, Iran and China signed a 25-year accord intended to foster "strategic co-operation". Despite ongoing uncertainty over the deal's actual scope, content and chances of ... END_OF_DOCUMENT_TOKEN_TO_BE_REPLACED

Researchers agree that climate change alone cannot be blamed for the outbreak of war in Syria in 2011. However, neither can it be ignored as a reason this once blossoming country ... END_OF_DOCUMENT_TOKEN_TO_BE_REPLACED

It's no secret that the Baha'i community in Iran is persecuted. Now, a document has come to light that appears to show the extent to which the repression is state-sponsored. By ... END_OF_DOCUMENT_TOKEN_TO_BE_REPLACED

It's so sad that she has to

It's so sad that she has to go to another country for help because President Obama is ignoring these human rights issues.

We continue to pray for him and his family.

END_OF_DOCUMENT_TOKEN_TO_BE_REPLACED
Social media
and networks
Subscribe to our
newsletter