The Right to Slander God?

"Yes, one has a right to caricature God" – so read the headlines of France Soir, one of the first European newspapers to follow the Danish cue and print the controversial caricatures. But this right is rather new, writes Ann Kathrin-Gässlein

​​The influence of the Enlightenment led to changes in the notion of blasphemy in Europe. "Religious defamation" replaced the concept of blasphemy – which had been an accusation often launched at religious or philosophical reformists. By granting the right to freedom of speech, the state was trying to protect the right to objectively criticize religious institutions and thus refused to punish or exclude those accused of blasphemy. Legal protection was aimed more at the religious feelings of individuals.

The modern cases of slandering God that the world has grappled with in the twentieth and twenty-first centuries, however, have mostly been related to artists who have allegedly injured the feelings of others. Usually the chosen form of their statements are understood to be as reproachful as the content.

The case of George Grosz

The "grandfather" of blasphemous art is perhaps the caricaturist George Grosz. His case became one of the greatest blasphemy-related trials in German history. As a twenty-one year old, Grosz took part in the First World War. 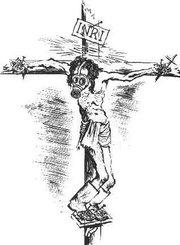 ​​Still under the shock of his experiences, he began to make drawings of people that illustrated the various forms of social violence: drunkards, people vomiting, men swearing at the moon with a clenched fist, murderers who played cards on top of a box in which their victim's corpse is visible…

In 1928 Grosz published a drawing in a very simple, expressive style with the title "Christ with gas mask." This theme had long occupied him, and he was trying to imagine how Jesus could be portrayed as a person of his times.

He chose to represent the crucified Jesus as a victim of the times, wearing boots and a gas mask, a cross in his hand. At the margin of the drawing is written, "Shut up and keep serving."

The blasphemy trial resulted when the image was published. The decision on the case came in three parts: first a fine, then exoneration, and finally the annulment of the exoneration. A final decision was not reached because Grosz fled to the United States in 1933. His works were exhibited by the National Socialists as "degenerate art."

In recent years, in Christian theology the view has been asserted that it is better not to protest blasphemous representations because this only draws attention to them. But George Grosz has had many like-minded successors who have spurred conflict, right up to the present day. Here are just a few examples:

END_OF_DOCUMENT_TOKEN_TO_BE_REPLACED
Social media
and networks
Subscribe to our
newsletter