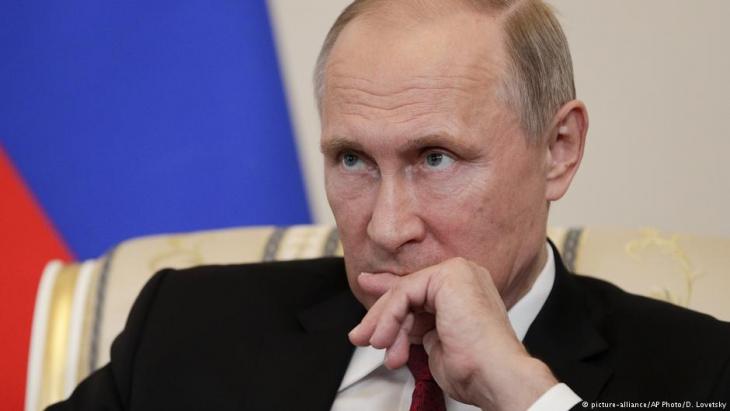 Civil War in Libya
What is Russia really up to?

Over the last few months, Russian diplomatic and political engagement in Libya has triggered many speculations over Russia's agenda in this war-torn North African country. Moscow's alleged increased military presence in eastern Libya sparked international controversy and even led some western observers to conclude that Russia is aiming to repeat the Syrian scenario in Libya. By Stasa Salacanin

For some time now, Russia has been seeking to restore its position in North Africa, increasing co-operation in a variety of fields with almost all the countries in the region. Its once impressive trade and political relations with Libya, for instance, completely collapsed after the uprising in 2011, when all previously signed contracts in the energy, infrastructure and health care sectors were annulled. Moreover, as a result of the UNʹs arms trade embargo, Russia lost $4 billion worth of arms contracts.

The uprising in 2011 plunged Libya into complete disorder with far-reaching consequences. Russia claims that the 2011 intervention by the West and NATO is the main cause of the chaos that has since ravaged the country.

The internal struggle for power has divided Libya between two major rival factions and inspired a new Islamist insurgency involving the Islamic State militant group as well as tribal factions. The Tobruk-based Libyan National Congress, which is supported by the Libyan National Army's leader Khalifa Haftar, controls much of Eastern Libya. Haftar gained in popularity and reputation after achieving victories over Islamic radicals. The Western states, as well as the UN, however, have endorsed the Tripoli-based Government of National Accord (GNA) and its leader Fayez Sarraj as the legitimate government. Although Russia has maintained contacts with both parties in the conflict, it has much closer ties with Haftar, who has urged Moscow to help his side financially and militarily. 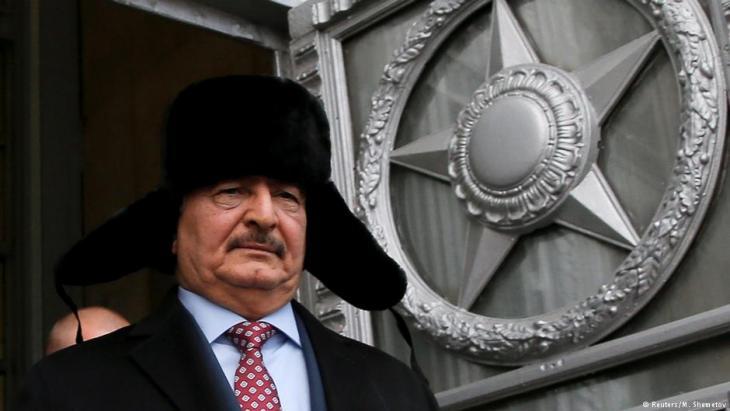 In October, UK tabloid The Sun reported that Russia had allegedly set up military bases in Benghazi and Tobruk, deploying special forces and missiles and sending weapons to help the head of the Libyan National Army in the east of the country, Field-Marshal Khalifa Haftar, take over the country. Experts have expressed doubt that this is the case. Pictured here: Khalifa Haftar during a visit to Russian Foreign Minister Sergei Lavrov on 29 November 2016

There have recently been many rumours and much speculation about Russia's plans to play a more decisive role in Libya, including the deployment of troops.

UK tabloid The Sun reported in October that Russia had allegedly set up military bases in Benghazi and Tobruk, "using the cover of controversial Russian private military company the Wagner Group". The article stated that Russia had deployed special forces (Spetsnaz) and missiles, while also sending weapons to help the head of the Libyan National Army in the east of the country, Field-Marshal Khalifa Haftar, take over the country.

But is there any truth in this? The Sun, after all, is not a media outlet known for quality in-depth geopolitical analysis. This is why Tim Eaton, a research fellow with Chatham House's MENA Programme, suggests that one should treat The Sun article with caution. "The depth and style in which it was written suggest that it was placed there and not created by the newspaper itself. I have heard suggestions that intelligence services are responsible for this," he told Qantara.

Wayne White, a policy expert with Washington's Middle East Policy Council argues that Libya remains too unsettled for Putin to contemplate setting up a major base there. The location of any major military installation would surely be viewed as a provocation by one of Libya's two main rival governments.

By sending some limited Russian personnel, currency and munitions to the eastern-based Libyan National Congress (the latter via Egypt), the Russians already risk antagonising the Tripoli-based Government of National Accord, although they have been careful to remain in touch with GNA Prime Minster Sarraj in a high profile manner.

The Sun article, not to mention reports from some other outlets, also claims that control of Libya is part of a Russian greater master plan, namely to seize control of the biggest illegal immigration route to Europe with the aim of using it as a bargaining chip in their talks and relations with Europe. 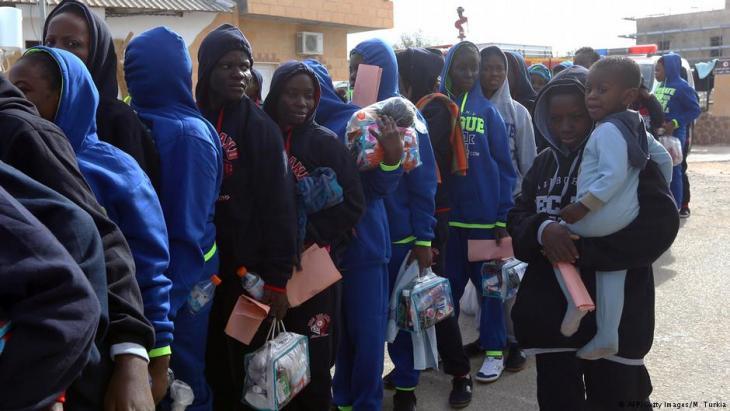 According to the International Organization for Migration (IOM), there are approximately 600,000 refugees in Libya at the current time. However, the number of migrants in Libyan camps has dropped significantly from 17,000 a year ago to about 5,000 now. These migrants are spread over 26 camps across the country. Pictured here: African refugees in Tripoli

Securing control of the Libyan coast and thereby the immigration routes to Europe, notes White, is certainly not Moscow's goal. The best Russia can – and probably does – hope for is a sympathetic Libyan regime with broad control to do that.

For Eaton, Libya is wary of external intervention, and it is hard to see Prime Minister Sarraj or Field Marshall Haftar acceding to the establishment of a Russian naval base, should the Russians even wish to establish one. On the contrary, it is Haftar who is seeking to market his claim that he can control irregular migration. To do this effectively, any player must be able to address the land routes, not just the crossing of the Mediterranean.

According to White, in addition to seeking to re-establish some lost influence in North Africa, Russian involvement is to a great degree exploratory. However, Moscow is also concerned about suppressing militant Islamic elements and, if it helps Haftar, currying favour with Sisi's Egypt, Haftar's main backer (along with the UAE).

But the double-engagement policy in Libya by Russian diplomats and the Russian military raises many questions. Some observers even mention the possibility of inter-agency rivalry between Russian state institutions, each of them with a stake in a different party. But it is more likely that Russia is trying to keep open channels of communication with all parties in the conflict and benefit, regardless of who ultimately emerges as the winner. This reflects the varying Russian interests in Libya and indicates that Russian players, according to Eaton, will adopt a relatively opportunistic approach, seizing chances where they identify the potential for significant gain with minimum investment. It is unlikely that Russia has the will to invest what would be required to become the international mediator for a political settlement in Libya.

And much like other parties who have tried to put down roots in Libya, the Russians could fall victim to the many militant and otherwise violent parties inside Libya, losing personnel and then dialling back any notion they may currently entertain of establishing a significant footprint there.

A ceasefire has been in effect in Libya for the past year and a half. Yet after Russia's attack on Ukraine, another proxy war looms in Africa's most oil-rich country. Mirco ... END_OF_DOCUMENT_TOKEN_TO_BE_REPLACED

Libya's first-ever skate park opened at the end of May in downtown Tripoli to the delight of local youngsters. Built on a site once used by former dictator Muammar Gaddafi's ... END_OF_DOCUMENT_TOKEN_TO_BE_REPLACED

United Arab Emirates strongman Sheikh Mohammed bin Zayed al-Nahyan, who was formally elected president on 14 May, has led a realignment of the Middle East, creating a new anti- ... END_OF_DOCUMENT_TOKEN_TO_BE_REPLACED

Russia's ranking on the World Press Freedom Index has fallen again over the Kremlin's wartime censorship of the Ukraine conflict. From Myanmar to Mexico, journalists continue to ... END_OF_DOCUMENT_TOKEN_TO_BE_REPLACED
Author:
Stasa Salacanin
Date:
Mail:
Send via mail

END_OF_DOCUMENT_TOKEN_TO_BE_REPLACED
Social media
and networks
Subscribe to our
newsletter