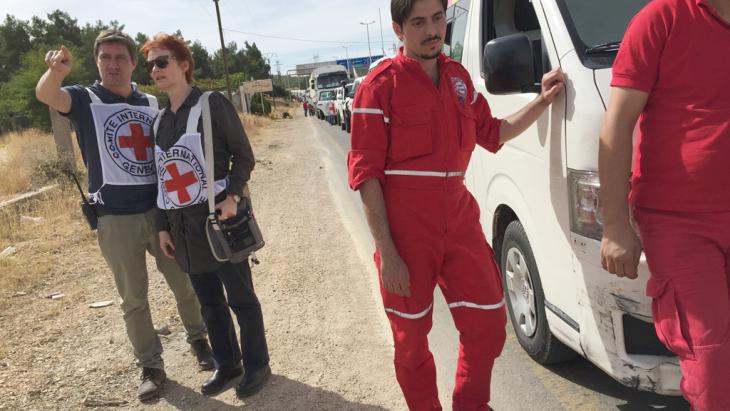 The Syrian dictator is systematically committing war crimes. Nowhere is the failure of the international community so evident. Commentary by Paul-Anton Kruger

Starving civilians as a method of warfare is prohibited – as is clearly set out in the Geneva Convention. A contravention of this constitutes a war crime, even in internal state conflicts. In Syria however, this has been common practice. For years. And as time has gone by, on all sides of the war. This profoundly gruesome and inhuman tactic is being employed by the rebels and the Islamic State terror militia.

However, no side deploys the besieging of civilian areas, indiscriminate bombardment and starvation as a weapon in as systematic a fashion as the regime of Bashar al-Assad and its allied militia, such as the Iranian-backed Hezbollah. If they lose control of territory, they then try to unleash all the means at their disposal to make life hell for the people living in those areas.

On Monday, 44 trucks from the International Committee of the Red Cross reached the town of Madaya on the border with Lebanon, controlled by anti-government forces. The 42,000 people trapped here have not received any aid since last October. They have been forced to eat grass, leaves, dogs and donkeys.

It is difficult to verify if the terrible photographs of emaciated children being circulated on the Internet and Arab television are all genuinely from Madaya. The aid organisation Doctors Without Borders has however registered at least 28 cases in which people have died there of starvation or as a result of malnutrition since 1 December.

It does not matter if the rebels, as the regime maintains, are storing food for their fighters. Nothing can justify the months-long blockade. There can be no justification, even if the radical rebels of the Islamist group Ahrar al-Sham, supported by Saudi Arabia, are doing the same in government-held Shia villages. The victims are always defenceless civilians, who have no choice about whose rule they live under. And the weakest are always the first to die: children, mothers, the sick, the elderly. 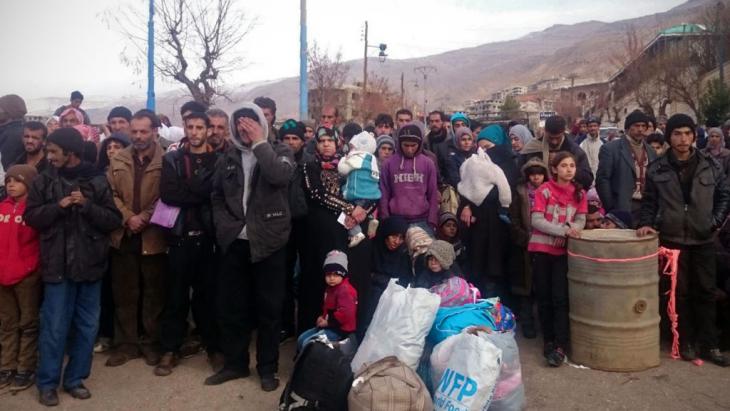 Waiting for international aid: in reaction to the desperate plight of its residents, the United Nations is now looking to seeking to rescue hundreds from the besieged Syrian town of Madaya. About 400 individuals are currently in a "critical condition" and must be evacuated "immediately" from the town for treatment, explained UN aid co-ordinator Stephen O'Brien. Negotiating with the conflicting parties however is proving difficult. A representative of the UN High Commission for Refugees described the suffering in Madaya as unprecedented

The UN says 400,000 Syrians are currently living under siege, 160,000 more than a year ago. Almost half of them are surrounded by government troops, almost 200,000 more by "Islamic State" in government areas close to the city of Deir al-Sour and another 20,000 by rebels. Nowhere is the failure of the international community more evident than in the fates of these people. Like the sieges of Yarmouk and Homs before, the situation in Madaya has triggered an international outcry.

Assad has no need to fear the UN Security Council

But this has not helped to enforce UN Security Council resolutions demanding unrestricted access for aid organisations. Russia and Iran are doing nothing to force the regime to comply with these. According to the UN, only one in every 10 of its requests to get aid to besieged areas is being granted. The Saudis are also not applying the pressure required to discipline the rebels.

Local ceasefires negotiated by the UN, often the only chance to help the afflicted population, are usually nothing more than rebel capitulations enforced by siege. The regime claims these, just as it did in Homs, as successes. And feels emboldened to offer those trapped in other places the choice: "Give up – or face destruction!"

Assad has no need to fear the UN Security Council. As the Red Cross convoys reached Madaya, he was tightening the noose around Muadhamija, a suburb of Damascus attacked with chemical weapons by the regime back in 2013. But the vague prospect of the International Criminal Court perhaps one day calling their tormenter to account is doing nothing to help the besieged at this present time.

Home
Print
Newsletter
More on this topic
IS: the winners and the losers: The time is ripe for Bashar and his croniesWestern involvement in Syria: Fewer bombs, not more!Chronicle of a war foretold: Redefining the "Syrian" conflict
Related Topics
'Islamic State' | IS, Assad regime, Human rights, Humanitarian aid, Syrian Civil War, Syrian opposition, United Nations (UN)
All Topics

Millions in Idlib depend on aid coming through a northern border crossing. On 10 July, the UN Security Council votes whether to keep it open. The decision may hinge not only on ... END_OF_DOCUMENT_TOKEN_TO_BE_REPLACED

For a century, the Kurds and other minorities in Turkey have been subject to state repression. With his dissertation "The Kurdish Question in Turkey", political analyst Ismail ... END_OF_DOCUMENT_TOKEN_TO_BE_REPLACED

Syria, Egypt, Saudi Arabia and the UAE are among those countries increasingly misusing cybercrime legislation to silence dissent and curb freedom of speech. Could a new global ... END_OF_DOCUMENT_TOKEN_TO_BE_REPLACED

A new exhibition, "Syria – Against Forgetting", at Cologne’s Rautenstrauch-Joest-Museum focuses on Syria's artistic and cultural heritage and pays tribute to the country before ... END_OF_DOCUMENT_TOKEN_TO_BE_REPLACED

This year’s Morgenland Festival opened with the premiere of Kinan Azmeh’s musical theatre piece, “Songs for Days to Come”, based on fifteen poems by contemporary Syrian poets. ... END_OF_DOCUMENT_TOKEN_TO_BE_REPLACED

Longlisted for the 2020 International Prize for Arabic Fiction and now available in German translation, Khaled Khalifa’s novel “No One Prayed Over Their Graves” details lives and ... END_OF_DOCUMENT_TOKEN_TO_BE_REPLACED
Author:
Paul-Anton Kruger
Date:
Mail:
Send via mail

END_OF_DOCUMENT_TOKEN_TO_BE_REPLACED
Social media
and networks
Subscribe to our
newsletter