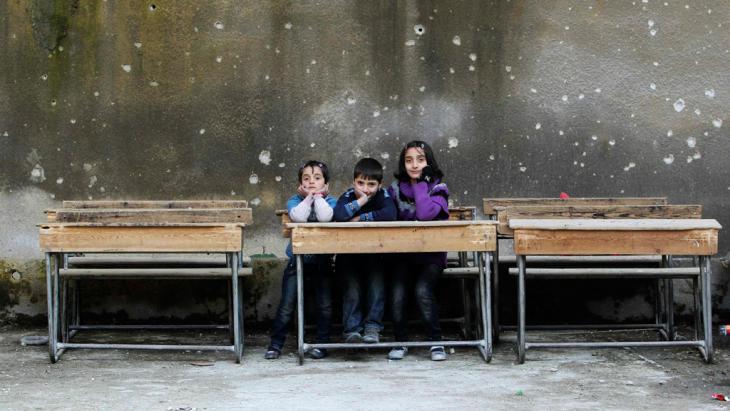 Civil war in Syria
Everyday life in a country destroyed

"Please help yourself!" A man provides food for the needy, a tradesman sells perfume, a group of students organise a cycling race: between death, ruins and thoughts of escape, there are strong signs of a will to live in Syria. By Rasha Muhre

The scent of apple tobacco and cardamom coffee wafting along the alleys of the old town centre. Tourists and locals turning night into day. Teenagers parading Western fashions outside their schools, women having their nails done in beauty salons. That was everyday life in Damascus up to March 2011.

Two months previously, the Arab Spring had begun with mass protests on Cairo's Tahrir Square. Most Syrians did not think the effect would spill over – me included.

Have you ever opened the door after a sunny day and been caught unawares by an ice-cold wind? That was how it was when the war came to Syria. We were paralysed. For a whole week, the people of Damascus didn't dare to leave their homes. Public life stood still. No child went to school, no adult to work.

Today, four years since the war broke out, there are some 200,000 dead to mourn; 3.7 million Syrians are scattered as refugees across Lebanon, Turkey or Jordan; eleven million are displaced within their own country. From Homs to Aleppo, the hospitals are full of children who have lost arms or legs to grenades or bomb fragments from one of the warring parties. The question "should we stay or should we go" has long since become omnipresent in Syrian families.

All we have to remind us of the days before the war are photos. For many Syrians, they are the most valuable things they still possess. The Syrian nation is one of pride and dignity. Even as refugees in tents, people make an effort to take good care of themselves and their clothing. They are not used to being dependent on others. When the first internally displaced families moved into school buildings, the women spent days simply standing on the spot. They were used to clean homes and cooking for large families. Suddenly a void opened up in their lives. 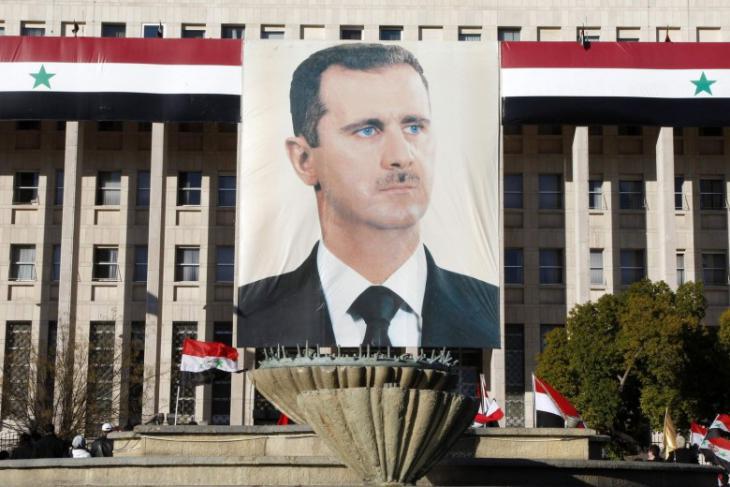 "Outside, the facades were spick and span, but behind them the fabric was crumbling". According to emergency aid co-ordinator Rasha Muhrez, although things might have looked good and stable in Syria prior to the Arab Spring, the single-party system and the lack of freedom of opinion in the country fuelled widespread discontent

There is no "right" side

Of course the country was far from perfect before the war. Urgently required economic reforms had been largely unsuccessful. The slow-moving state apparatus that employed every third Syrian and the corrupt social system torpedoed the reforms. The opening of the private sector brought jobs for the highly qualified, but the majority remained unemployed or went on dreaming of becoming functionaries in the civil service.

Even the many new cafés and restaurants in the city centres could not conceal the fragile economic situation. Outside, the facades were spick and span, but behind them the fabric was crumbling. The Baath Party's single-party system and the lack of freedom of opinion fuelled discontent in parts of the population.

Yet most Syrians did not anticipate the war. Today, most people only have a peripheral interest in politics. They want to survive, and political activities are a danger to life and limb. There is no such thing as the "right" side. The government arrests its opponents, while the opposition has them kidnapped.

Caution and prudence are the watchwords of the day. Walks or drives are only taken for good reason. Conversation partners, even if they are supposed friends, are eyed with suspicion. The war has changed people's characters.

Although most Syrians are aware of the terrible conditions in the refugee camps, many see no other option for themselves and their families than to take flight. Parents have to weigh up every day whether their children's education or their safety is closer to their hearts. The warring parties do not spare even the youngest. A recent bomb attack on a school in Damascus killed 12 children, with 45 killed several months previously in Aleppo. The war has robbed children of their right to live. 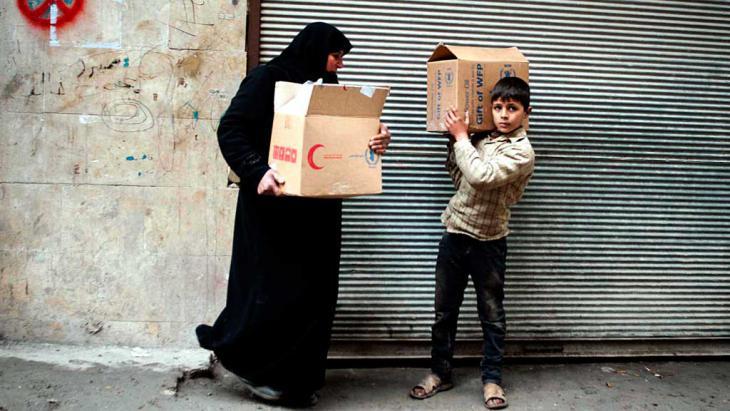 "Yet despite the mines, the bombs and the destruction, life in Syria is not standing still. People want to live. There are examples across the country, expressing this will to live in many different ways," writes Rasha Muhrez

A steely will to live

Young men, in turn, are forced to flee because they cannot escape the war. For them more than others, it is a question of dying and of killing. They are called up, their names printed in lists that are then distributed to every government checkpoint in the country. Whether it is their war or not is absolutely irrelevant.

Yet despite the mines, the bombs and the destruction, life in Syria is not standing still. People want to live. There are examples across the country, expressing this will to live in many different ways. When the former economic centre Aleppo was cut off from the outside world during its eight-month blockade, one man put out a fridge in his neighbourhood.

Every day he put a plate of leftover food in it, with a sign attached to the fridge: "Please help yourself!" Neighbours who would otherwise have gone hungry had no need to risk their dignity by begging. The word got out and the idea became a successful form of neighbourhood help, in which all the locals took part.

In the midst of the rubble of Homs, another man runs a small shop, its walls riddled with bullet holes. He sells perfume. His shop give a sense of normality back to life in the war; the scent and the luxury give his customers a tiny piece of that self-worth that war takes away from people.

Recently, Damascus students sent out Facebook invitations to a cycling rally. More than a thousand people turned up and took part, cycling through the city in the middle of the war: another sign of that will to live. 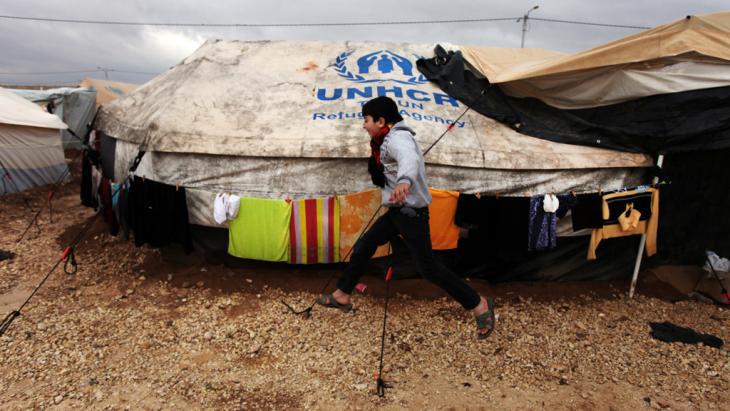 To stay or to flee? "Although most Syrians are aware of the terrible conditions in the refugee camps, many see no other option for themselves and their families than to take flight," writes Rasha Muhrez. Over 3.5 million Syrians are living as refugees in Lebanon, Turkey and Jordan; 11 million are internally displaced

Giving up and leaving – an alternative?

For all these people, carrying on and simply living their lives is crucial. Almost everyone has lost something in this war. There are very few families with no one to mourn. Every individual deals with the situation differently. Some find it helpful to maintain a kind of everyday routine. People like me need a useful task that gives us a reason to go on every day.

As emergency aid co-ordinator for the SOS Children's Villages, I try to make sure that men, women and children who have lost everything, who are housed under inhumane conditions in camps, schools, basements and unfinished buildings, can be provided with essential items like winter coats, blankets, heating appliances or urgently needed medical help.

Every time I visit a refugee family, I see that what we are doing is a good thing, but it is never enough. Yet what would be the alternative? Giving up and leaving? After four long years living in constant fear, everyday life is gradually returning to Damascus.

Although the danger has been neither averted nor reduced, the locals are going out in the evening again. The ice-cold wind is still blowing in their faces as soon as they open the door. By now, however, they have got used to it.

Rasha Muhrez, 33, is the emergency aid co-ordinator for the SOS Children's Villages in Syria. The organisation is currently caring for 200 children; its institution in Aleppo has had to close.

Arab youth express their hopes and wishes for the New Year, spanning everything from civil and political rights, to education, to arts and culture. By Rafiah Al Talei END_OF_DOCUMENT_TOKEN_TO_BE_REPLACED

Life imprisonment for crimes against humanity: that was the sentence handed down to Anwar Raslan in the world's first trial of a member of the Syrian torture system. Matthias von ... END_OF_DOCUMENT_TOKEN_TO_BE_REPLACED

Moncef Marzouki was Tunisia's first democratically elected president after the fall of dictator Ben Ali. Today he is the most prominent critic of increasingly counter- ... END_OF_DOCUMENT_TOKEN_TO_BE_REPLACED

Historically Iraq's Yazidi community was isolated, under-resourced and very conservative. Seven years after the "Islamic State" tragedy, the community is more open to the world – ... END_OF_DOCUMENT_TOKEN_TO_BE_REPLACED

In this new bilingual edition, translated by Humphrey Davies, al-Jawbari, one of the thirteenth century's leading experts in skullduggery reveals all there is to know about the ... END_OF_DOCUMENT_TOKEN_TO_BE_REPLACED
Author:
Rasha Muhrez
Date:
Mail:
Send via mail

END_OF_DOCUMENT_TOKEN_TO_BE_REPLACED
Social media
and networks
Subscribe to our
newsletter