Although climate change has been brought about largely by development in industrialized rich nations, it will impose the most hardship on the poorest countries, argues Chandrashekhar Dasgupta 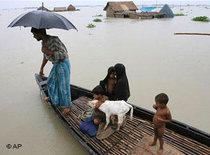 ​​In the recent months, torrential rains and floods have taken a heavy toll of lives and rendered homeless tens of thousands of families in rural India. This is not climate change but the onset of a benign monsoon, the answer to the prayers of a billion Indians.

However, human suffering on such a scale raises an important question for all those concerned about climate change: If a developing country is so vulnerable even to normal seasonal variations, how will it cope with the impacts of climate change – floods and droughts, sea level rise, changes in rainfall patterns, cyclones or typhoons?

Most people in developing countries eke out a living as subsistence farmers. They are far more vulnerable to changes in temperature and rainfall patterns than city dwellers engaged in industry or commerce.

Obstacles to adapt to climate change

Unlike farmers in countries well endowed with financial and technological resources, peasants in developing countries will find it difficult to adapt to climate change by switching over, say, to new drought-resistant seeds or crops, efficient but expensive water-conservation technologies such as drip irrigation or simply shifting to new urban occupations.

Low-income countries do not have adequate resources for building the housing and other physical infrastructure needed to afford protection against floods or cyclones. The world's poor will be the principal victims of climate change.

For the poorer countries, accelerated economic and social development holds out the only hope of adapting to climate change with any degree of success. Without rapid economic growth, they will lack the financial resources required for adaptation.

Without rapid social development in fields such as education and public health, their workforce will continue to be deficient in the skills and mobility required for adaptation to climate change. Accelerated development is the key to successful adaptation in the South.

The prospects of future generations will be seriously jeopardized if the present generation in developing countries fails to achieve rapid growth. For poorer countries, sustainable development is synonymous with accelerated development.

Yet, affluent countries press the poor to accept a very different approach. They urge the developing countries to strike a "balance" between development and climate-change mitigation.

Their argument is that the industrialized countries are unable, or unwilling, to reduce their own greenhouse-gas emissions on the scale required for limiting climate change within a certain range.

Therefore, according to this line of reasoning, developing countries should curb their rising greenhouse-gas emissions, even at the cost of slowing down development.

Nor would it bring new benefits in respect of mitigation. No one questions the desirability of moderating emissions originating in developing countries. The real question is, who pays for it?

Under the UN Framework Convention on Climate Change, the countries listed in Annex II – broadly corresponding to members of the Organization for Economic Cooperation and Development – are required to meet the incremental costs of mitigation measures in developing countries.

Financial burden for the developing countries

The proposal now advocated by these countries would shift all or, at least, part of the incremental costs to the shoulders of the developing countries.

This brings us to the question of equity. Climate change is caused not by emissions of greenhouse gases as such but by excessively high emissions of these gases. Indeed, the presence of carbon dioxide in the atmosphere is essential for life on our planet.

Human activities have generated greenhouse-gas emissions at least since the discovery of fire, but these did not interfere with the climate system until recent centuries.

It was only after the advent of the Industrial Revolution that the ever-increasing combustion of hydrocarbon fuels – coal, petroleum and natural gas – caused emissions and atmospheric greenhouse gas concentrations to exceed limits compatible with a stable climate.

The industrialized countries are responsible, historically and currently, for the excessive atmospheric greenhouse-gas concentrations.

Each inhabitant of our planet has an equal right to the atmosphere, but the industrialized countries have grossly exceeded their fair share. Annual per capita carbon-dioxide emissions are around 20 tons in the United States, 8.5 tons in the European Union and only 1 ton in India.

If all countries had the same per capita emissions as India, climate change would not have occurred. Apart from being responsible for climate change, the industrialized countries also possess the financial and technological resources required for a global response. Their capabilities are much greater than those of developing countries.

The UN Framework Convention on Climate Change is based on the principle of equity, reflecting the "common but differentiated responsibilities and respective capabilities" of the industrialized and developing countries.

Most OECD countries also have a commitment under the convention to transfer financial resources and technology to developing countries to cover the incremental costs of mitigation measures implemented by the latter.

These include an obligation to "formulate and implement… programs containing measures to mitigate climate change." Developing countries are expected to implement measures that do not involve incremental costs, i.e., measures yielding mitigation co-benefits, though they are primarily designed to promote national development priorities.

Developing countries are not required to take measures involving incremental costs, unless the industrialized countries meet these additional costs.

END_OF_DOCUMENT_TOKEN_TO_BE_REPLACED
Social media
and networks
Subscribe to our
newsletter