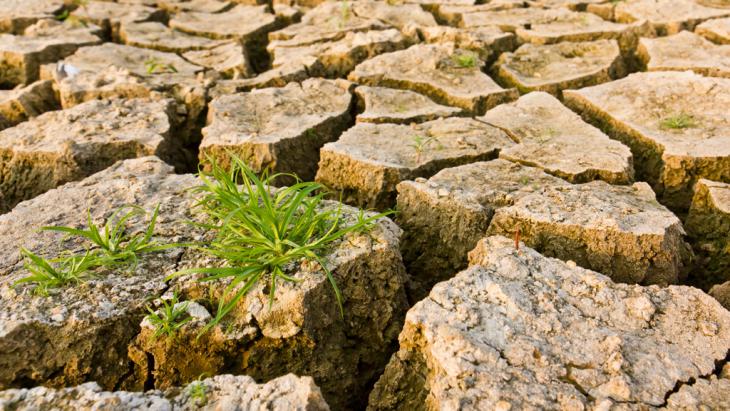 Climate change consequences for the Islamic world
Of infernal proportions

The countries attending the Climate Change Conference in Marrakesh are ready to commit themselves to the fight against global warming. Even if greenhouse gas emissions do begin to decrease, however, the climate change already underway will have devastating consequences for the host country and for the rest of the Arab-Islamic world. By Stefan Buchen

If there is one thing North Africa and the Middle East are not short of it is crises. The wars raging in the Fertile Crescent, in Yemen and Libya have become as depressingly familiar as the dangerous, interminable slow-burn of the Israeli-Palestinian conflict.

Turkey is gradually being transformed into a dictatorship, while Egypt, a country which has already returned to that state, is facing bankruptcy.  For decades now, the former "breadbasket" on the Nile has not been producing enough food to feed its rapidly growing population. Now the government can no longer afford to pay for the necessary grain imports. Even in apparently stable countries, like Morocco, the smallest of sparks may ignite flames of protest.

All of this is more than enough justification for a high level of despondency. Added to these political-social conditions, however, there is another, more subtly insidious blight. Neither dramatic nor sensational, it is a gradual, barely perceptible affliction, so gradual that, in the short-term, the small changes that characterise it seem normal. The term "creeping normalcy", has been used by the US scientist Jared Diamond to describe the inability of people even to recognise the problem.

From Casablanca to Dubai, summers have never been cool. Anyone foolhardy enough to have taken to the beach in the Red Sea resort of Dahab in July without a sunshade, visited the pyramids at Giza in the heat of the mid-day sun, or the Chehl-Sotun palace at Isfahan, even those who dared to take a hundred-metre walk to cross the street in Doha can testify to that. A closer look at the figures makes it clear that temperatures across North Africa and the Middle East are on the rise, especially in the summer months.

Scientists from the Max Planck Institute for Chemistry have been taking a closer look. Their predictions make for depressing reading. Using computer simulations, they are predicting that there will be an average rise in temperature in the region of around four degrees celsius by mid-century. This would mean the number of extremely hot days, with maximum temperatures of 46 degrees and above, rising five-fold, from 16 at present to 80 days a year. Night-time temperatures would not sink below 30 degrees. "The climate in many parts of the North Africa and the Middle East could change so drastically in the coming decades that these areas would become hostile to life," says atmospheric researcher Jos Lelieveld, leader of the study published earlier this year. There is a real danger of these areas becoming "uninhabitable" for many creatures, including humanity. 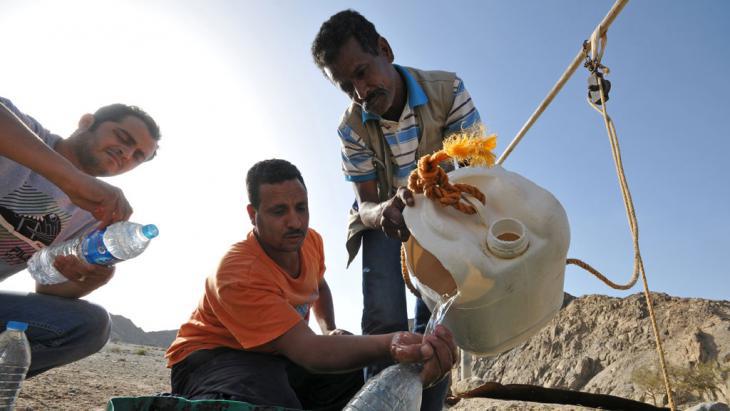 Dwindling resources, increasing desertification: for decades now, the former "breadbasket" on the Nile has not been producing enough food to feed its rapidly growing population. Now the government can no longer afford to pay for the necessary grain imports

Describing such a "blight" as an act of God, is of course not accurate. This horror scenario is after all the result of man-made global warming. In the 200 or so years that have elapsed since the advent of industrialisation, we have released too much carbon dioxide into the air and by doing so, increased the natural greenhouse effect.

The rise in temperature, however, is not uniformly distributed across the globe. It is greater in some regions than in others: in the Arctic, for example, or in the arid and semi-arid regions of North Africa and the Middle East.

Even today, the increase in temperatures is causing more dust to be stirred up. According to the Max Planck Institute, fine dust pollution in Saudi Arabia, Iraq and Syria has increased by 70 percent during the last two decades as a result.

Under cover of a sandstorm

This is happening even without the bombers and howitzers that are currently pounding the concrete of Aleppo and Falluja to dust. There is no doubt that an interaction between political events and climate change in North Africa and the Middle East exists. In May 2015, an "IS" battalion captured the Iraqi city of Ramadi under cover of a sand and duststorm that prevented anti-IS coalition fighter aircraft from taking off. And just a little further back in time, the four years of drought prior to 2011 was a factor in the dissatisfaction and despair of the rural population in Syria, which was one of the contributing causes of the uprising against the Assad regime.

This month will see the world's climate experts coming together in Marrakesh. The onus will then be on each of the individual countries to explain how they intend to fulfil the commitment they made in Paris – to limit the average increase in global temperature to a maximum of two degrees. The bad news for the city of Marrakesh and for the countries on its latitude, is that even if the world manages to reduce CO2 emissions, the populations of North Africa and the Middle East, in the coming generation, will experience an average rise in temperature of 4 degrees compared to pre-industrial  times. Should greenhouse gas emissions continue at present levels (the so-called "business-as-usual-scenario"), scientists are predicting a total of up to 200 extremely hot days a year in the region by the end of the century. 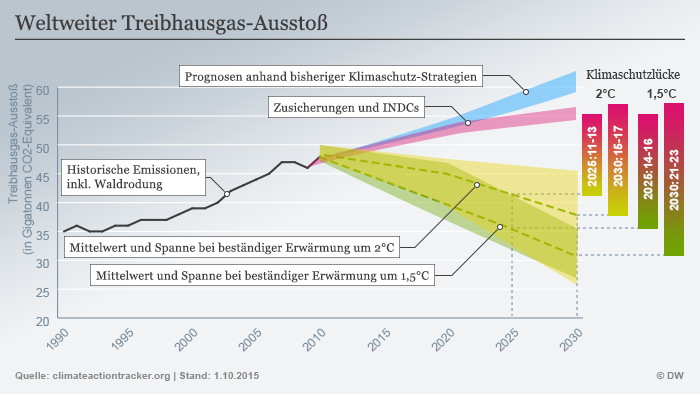 Alarming levels of CO2: last year saw more CO2 than ever before in the atmosphere. That′s the conclusion reached by the latest report on greenhouse gases published by the World Organisation for Meteorology (WMO) in Geneva. According to the UN institution, the average concentration of CO2 in the air in 2015 was 400 parts per million: a symbolic watershed

Discussions of the deplorable political conditions in the Arab world tend to come down to the relative degrees of responsibility between outside aggression and the region's own self-destructive tendencies.  People question whether colonialism is to blame for the decline "or the people themselves are at fault".

Climate change in North Africa and the Middle East will no doubt add more fuel to the fire. The oil exporting countries, particularly Saudi Arabia, have always tended to drag their feet at climate conferences, putting their economic interests before the need to reduce greenhouse gas emissions. Through an excessive consumption of fossil fuels, their customers in North America, Europe, China and Japan contribute to global warming more than anyone.

The expected new discussion on the question of whom to blame for the climate-induced uninhabitability of large areas of North Africa and the Middle East is as unlikely to remain a mere theoretical exercise as the old dispute on the consequences of colonialism.

Anyone seeking more confirmation need look no further than the withered pistachio plantations in Iran, the decaying groves of date palms near Marrakesh, or the sandstorms in Baghdad. There are warning signs aplenty. Around 550 million people live in the countries of the Middle East and North Africa. Professor Lelieveld and his team believe that "sooner or later, many may have to leave the region."

From the perspective of the West, should this happen, then in the words of leading German climatologist Hans Joachim Schellnhuber, "Christian charity will seem, at best, no more than an ethical warm-up."

When is it and when is it not acceptable to display a political banner at the World Cup in Qatar? The answer seems to depend largely on the political message, with fans ... END_OF_DOCUMENT_TOKEN_TO_BE_REPLACED

The Kurds are under attack from two sides: from Turkey, and from Iran. The situation in their territories in northern Iraq is becoming increasingly desperate. Birgit Svensson ... END_OF_DOCUMENT_TOKEN_TO_BE_REPLACED

Iranians do not want an Islam that interferes. They are fed up with a system that manipulates people with simple promises of salvation and anti-Western propaganda. Islamic ... END_OF_DOCUMENT_TOKEN_TO_BE_REPLACED

"The Voice of Dust and Ash" draws us into the life and times of Iranian maestro Mohammad Reza Shajarian with passion and joy, focusing on the man who stood, and still stands, for ... END_OF_DOCUMENT_TOKEN_TO_BE_REPLACED

November 2022 sees the Arab world firmly in the spotlight with the COP27 in Egypt and the FIFA World Cup in Qatar. Public trust in MENA governments is weak, thanks to their ... END_OF_DOCUMENT_TOKEN_TO_BE_REPLACED

In Iran, two famous actresses, Hengameh Ghaziani and Katayoun Riahi, were arrested recently. These days anyone who shows solidarity with the protesters is a target to be silenced ... END_OF_DOCUMENT_TOKEN_TO_BE_REPLACED

Comments for this article: Of infernal proportions

My teachers in the grade and high school had an expression that applies to the above and I hope they take it to heart and work together to get water. One example: desalinization of ocean water as has been done in Saudi Arabia and finally in some places here in California. Remember " God helps them who help themselves!!" Do not listen to our Republican politicians saying that the climate change is a hoax. As you can show in Morocco and has been talked about in Syria BEFORE the civil war and in Iran in the northwest corner with lakes and the rivers running through Isfahan that are 80% dry except in January when it MIGHT rain. Best wishes and help your self with engineering to gain water from the oceans rising from the north. Praying alone won't do it.

END_OF_DOCUMENT_TOKEN_TO_BE_REPLACED
Social media
and networks
Subscribe to our
newsletter