An East German car mechanic embracing her Iranian lover: things like this only happen in the movies – for example, in the comedy "Salami Aleikum" currently showing in German cinemas. Regina Mennig reports 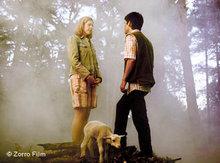 ​​ He was supposed to become a butcher and take over his father's meat business in Cologne, but the young German-Iranian Mohsen (played by Navid Akhavan) doesn't have the heart to kill animals. Instead he gets involved in some shady dealings, for which he has to travel to Poland. But he only gets as far as Oberniederwalde, deepest provincial East Germany, where he immediately falls in love with Ana (Anna Böger).

Ana is at least a foot taller than the diminutive Mohsen and was a successful shot-put athlete in the days when East Germany was a communist state.

In Mohsen and Ana two worlds collide. But they have one thing in common: their search for a place in society. This is the film's central subject, says director Ali Samadi Ahadi: "I have lived in Germany for twenty-five years and ever since I've been here I've been driven by the search for a place to call home, and the question, where do I belong? I've tried to deal with this in the film in a certain way."

Ahadi addresses the subject in a colourful, sometimes eccentric manner. When the film's characters lose themselves in daydreams or memories, the images appear as lurid, flickering comics on the screen. And throughout the action a fairy tale voice sounds, continually offering insights into Ana and Mohsen's emotional states.

The love story itself is hardly original. The couple's happiness is based on a white lie: because Ana is a vegetarian, the prospective butcher pretends to be a textiles businessman. Now, however, he unwittingly arouses the hopes of the population of the entire village that he will save its run-down East German clothes factory. Soon everyone is trying to gain the favours of the young German-Iranian, chief among them Ana's father (Wolfgang Stumph), former boss of the textiles factory. 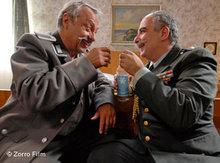 Iran and East Germany meet in the nostalgia for past regimes (Wolfgang Stumph, left, and Michael Niavarani)

​​ In depicting village life the film perpetuates every possible cliché about the East German provinces. Justin from the youth gang rattles down the potholed streets on his moped; the dingy pub is the repository for all the latest news. They are well-worn clichés, but effective for just this reason.

This is seen, for instance, in the bizarre scenes where Ana's parents sit on their sofa and talk directly to the cinema audience. "I've got nothing against foreigners – don't get me wrong," Ana's father assures us. And his wife (Eva-Maria Radoy) emphasises, "You should always be friendly, that's obvious. But when you get too friendly they get the wrong end of the stick. Then they fetch their whole clan over and then we end up with a mini Asia in our midst.... Still, at least he's not a West German!"

Ana and Mohsen's romance is gradually pushed to the background and the search for a place called home becomes the central theme. This is demonstrated most clearly by Ana and Mohsen's respective fathers. One was a general in the era of the Persian Shah, the other an East German official; both miss the prestige of former times. 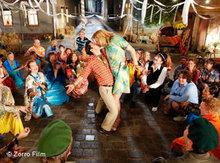 ​​In a final scene, full of pathos, the two fathers meet on a bridge and realise they must accept the reality they now live in. The fact that East German and Iranian destinies in particular are brought together in Salami Aleikum is no coincidence. Director Ahadi explains: "Many East German and Iranian fellow citizens do not have the same connection to Germany that others do, because the environment they grew up in is no more – whether they live in exile or in the era after the collapse of communism. In the film I address these parallels."

The parallels can clearly be seen, if somewhat late in the film. Ahadi has succeeded in turning essentially heavy-duty material into a light-weight comedy, not least because he has cast the right actors for the parts.

However as Mohsen's Iranian world and Ana's East German world come together, the plot shifts into the realm of fiction. At the end all the characters dance to Indian Bollywood music on the village green. As delightfully ridiculous as the scene appears, ultimately we have the impression that harmony remains an experiment carried out in the imagination; desirable, but utopian.

Iranian Comedy
Psychoanalysis for The Village Idiot
What do Parviz Sayyad and Hadi Khorsandi have in common? They are both renowned Iranian comedians. Ten years after their first joint show, Sayyad and Khorsandi have decided to go back on tour again. Shanli Anwar sends us this portrait of two Iranian artists in exile

Turkish Cinema: "Recep Ivedik 2"
Nightmare in Orange
You could describe Recep Ivedik with some justification as every cultivated person's nightmare. But this anti-hero is packing them into the cinemas in Turkey. As Christiane Schlötzer says, one reason is that Ivedik's ballyhoo is a fairly accurate picture of social divisions in Turkey