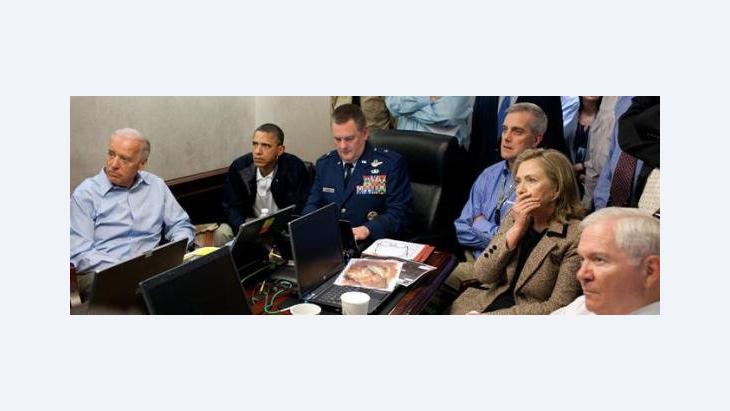 Commentary on the Death of Bin Laden

A Little Help from a Foe

The reactions following Bin Laden's death are a disaster. A person's death may sometimes be good news. But somebody's assassination never is. A commentary by Stephanie Doetzer

Angela Merkel is happy. Hillary Clinton is happy. Barack Obama claims that justice has been done and hundreds of Americans celebrate cheerfully right next to Ground Zero. Hmm. Is this the Western world that likes to think of itself as an epitome of civilisation?

Bin Laden has never been the Arab icon that many Westerners believed him to be. And during the last four months of Arab revolutions Al Qaida has become even more irrelevant. But the fact that he was shot by American special forces on a "kill mission" changes the picture. He now has a chance of becoming an icon after all.

To be sure, many Arabs aren't even interested in Bin Laden's death. There are far bigger issues to care about these days and the young revolutionary crowd doesn't have time for a man they perceive as a mere Western obsession. They didn't care while Bin Laden was still alive, and why would they now? 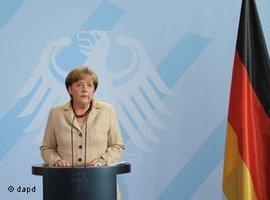 ​​Others, however, do care quite a lot. They started caring when the news of the killing broke and changed the tone in which Bin Laden is being talked about. While most Western media prefer to use the word "killing" rather than "assassination", Arab media go for either ightiyaal, meaning political murder, or istishhad, which is martyrdom said to lead straight to paradise.

More than ever, Bin Laden is now referred to as "Sheikh Osama Bin Laden". In most Arab countries this is a sign of respect – or at least, it's not the kind of word one would use to describe a heretic who has besmirched religion and misused Islam for his own goals.

In secular media, formulations are neutral and almost indifferent, but in many more religiously conservative outlets the tone is clearly one of mourning. But how to write about this for Western media without distorting the complex picture of Arab realities with its many shades of grey?

Does it make sense to quote the most outrageous reader's comments from Al Jazeera Arabic's website? From "May God have mercy on his soul and let him enter paradise" to "If he's dead, then we're all Bin Laden"?

Or is it more appropriate to quote those Arabs who say exactly the kind of stuff that Westerners want to hear? Like the commentators in Egypt's Al Wafd newspaper who call Bin Laden a "black spot in Islamic clothes" and hope to close a dark chapter of Arab history.

There has been plenty of both. What is new is that people who are neither Salafi, nor particularly religious now defend Bin Laden as a person. They don't approve of attacks on civilians, but they do consider him a fighter for a just cause rather than a criminal. And not because of 9/11, no. It's because of his criticism of the Saudi royal family, because of his speeches about Palestine and because he allegedly relinquished his family's fortune to lead a life of poverty.

Those who praise his principles and 'good intentions' don't hate the West, nor are they likely to ever turn terrorist. But they feel an immediate urge for solidarity when one of them – and that's what Bin Laden remained after all – gets shot by the special forces of a country of which they have ceased to expect anything good.

What may sound offensive to most Westerners, doesn't shock many Arabs. After all, Bin Laden's image in the Arab world has never only been that of a ruthless mastermind of international terrorism. He was the man that you could see on those Al Qaida videos from time to time, until they were replaced by audio-tapes. A man with a calm voice, a charismatic face and a captivating way of speaking classical Arabic – which is not exactly what the Western world got to see. Outside the Arab world, Bin Laden was reduced to fear-inspiring soundbites without context.

Is Bin Laden merely an obsession of the West? Al Qaida believes in violence as a political means, and, writes Doetzer, "the problem with many Western powers is that they believe in similar things, but without ever openly acknowledging it"

​​By listening to him directly, Arabs could disagree, discard his ideas and compare him with their official leaders they liked even less. Unlike most Westerners, they knew Bin Laden wasn't only talking about US foreign policy and Israel, but also about climate change and food security. And that he sometimes came up with suggestions for a US withdrawal from the Middle East that weren't completely preposterous.

But events in these days also show that many Arab Muslims never quite figured out their own take on Bin Laden: Within one conversation, the same person may well claim that Bin Laden was on the payroll of the CIA, then deny his involvement in the 9/11 attacks – and end up by saying that the attack could be morally justified given the American atrocities on Arab soil.

It's usually an emotional mishmash without much moral reflection, but a high dose of an intra-Islamic sense of unity that allows to downplay crimes committed by one's own group by pointing to those committing by others.

The mechanism is strikingly similar to what Americans and Europeans do when they celebrate the extrajudicial killing of an individual and justify their reaction by highlighting his crimes.

It's yet another example to show that the current enemies may have much more in common than they would ever admit: The problem with Al Qaida is that it believes in violence as a political means. The problem with many Western powers is that they believe in similar things, but without ever openly acknowledging it.

Watching those YouTube videos of Americans cheering in front of the White House feels a bit like a Déjà-vu. Last time, it was some Palestinians cheering the killing of Israeli settlers. And if I remember it rightly, Westerners were appalled by the pictures. 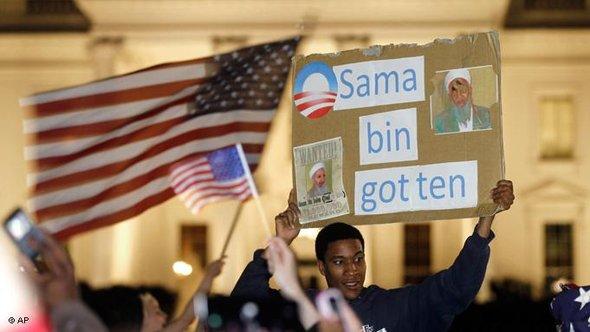 An eye for an eye: Doetzer criticises the extrajudicial killing of Bin Laden, arguing the victory of Al Qaida's ideology would have been more sustainable had it been achieved in court

​​Those chanting "U.S.A." and "We did it" in New York and Washington don't sound fundamentally different from Islamists chanting "Allahu Akbar". And in both cases, it's not the words that are problematic, it's the spirit behind them.

A myth rather than a man

Both are tearing at each other for double standards, but neither truly believe in the rule of law. After all, things could have been done differently: Bin Laden could have been captured and put on trial. We could have listened to his version of events and might have found out what kind of person he was.

Instead, all we have are a couple of pictures: Bin Laden as a young fighter in Afghanistan, and then the man with a turban and a greying beard. It's not much. And it allows him to be a myth rather than a man who has lived until a couple of days ago.

Had he died of kidney failure instead of the bullets, it may indeed have been a blow to Al Qaida.

But as things are, American special forces did him a huge favour by making him a martyr in the eyes of many. "I swear not to die but a free man" he said on an audio tape released in 2006.

He got what he wanted – with a little help from a foe.

German Middle East analyst Guido Steinberg and television journalist Ulrich Tilgner have both published new books on the conflicts in the Middle East. Their analyses and their ... END_OF_DOCUMENT_TOKEN_TO_BE_REPLACED

On 27 March, Iran and China signed a 25-year accord intended to foster "strategic co-operation". Despite ongoing uncertainty over the deal's actual scope, content and chances of ... END_OF_DOCUMENT_TOKEN_TO_BE_REPLACED

It's no secret that the Baha'i community in Iran is persecuted. Now, a document has come to light that appears to show the extent to which the repression is state-sponsored. By ... END_OF_DOCUMENT_TOKEN_TO_BE_REPLACED

Comments for this article: A Little Help from a Foe

Bin Laden not so bad

Is the author really saying Bin Ladin was maybe not soo bad, that we would maybe find out he was not the man everybody thought he was, and we should have given him a fair chance in a civil court?! Come folks, let's listen to what Bin Ladin has to tell us and THEN judge him. Don't be superficial, and don't pre-judge him.
Come on, get real, for God's sake!!

Yes, my name is Osama, ha ha, but why would I not write a comment about this issue...? Stefanie Doetzer is right on quite a few points, the West should not be so arrogant as to believe he is morally superior in each and every respect, but Osama bin Laden declared war on the west and instigated terror attacks in which several thousand people died, the worst terror attacks in history in fact, isn't that tight. It's remarkable that a country like Germany with its Nazi past now gets all excited about a chancellor who remarked - quite rightly I believe - she's happy this bad man is now dead. What is all the fuss about? It is difficult for other nations to understand.
O. Zardari, Canada

END_OF_DOCUMENT_TOKEN_TO_BE_REPLACED
Social media
and networks
Subscribe to our
newsletter