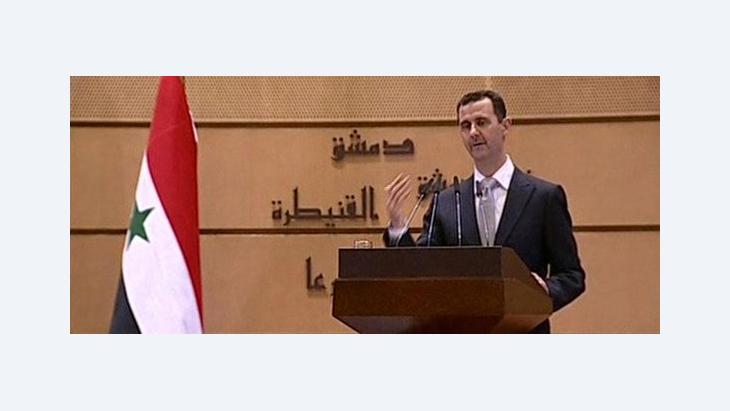 The Power of the Big Story

﻿One of the most effective weapons in President Assad's arsenal is what Jan Kuhlmann refers to as "the big story", the conspiracy theory peddled by the regime that foreign powers are behind the uprising in Syria. In this essay, Kuhlmann takes a closer look at this and other "big stories" circulating in the Arab world and examines their roots and their consequences

He who has the biggest arsenal, wields the most power, as does he who knows how to deploy these weapons most ruthlessly, like President Bashar al-Assad. The dictator from Damascus has no inhibitions when it comes to repressing his own people.

Up until now at least, the Syrian army has remained a loyal partner, as have Russia and China, nations that have allowed him to continue his bloody crackdown without so much as batting an eyelid. How wonderful to be able to rely on trusted partners even in times of crisis.

But Assad is not only going into battle with arms and allies at his side. He is also flanked by something that could be described as "the big story". The big story is rhetoric that is more or less constantly repeated until its veracity is no longer questioned by the masses. It is generally held to be the truth, which lends it enormous power when cleverly used to further one's own interests. Bashar al-Assad currently provides us with a chilling example of how this works. 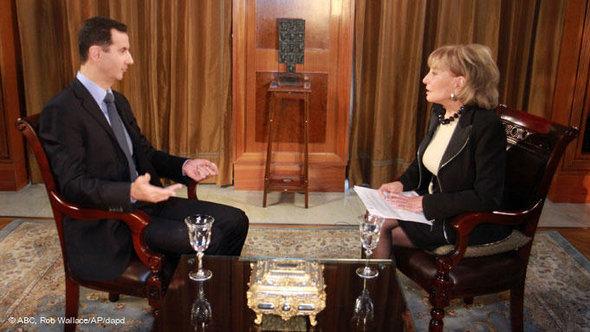 In an interview with ABC News in late 2011, President Assad denied ordering a bloody crackdown against protesters and claimed that most of those killed in the unrest were his supporters and troops; in a rare public speech in Damascus in January 2012, he blamed the unrest in Syria on terrorists, foreign meddling and media bias, singling out ABC News for its role

In Syria, the big story is that it is first and foremost foreign powers that have inspired otherwise content Syrians to rise up against their devoted government. These foreign powers aim to foment chaos, impose their own interests, repress the Syrians and divide the nation.

As for who these dark forces are, everyone knows the answer to that without having to name names: the US of course, the evil Satan; Israel, the Zionist enemy; Europe too; the rich Gulf states, who make common cause with the imperialist West; and the television broadcaster Al-Jazeera, politics' journalistic henchman.

Foreign powers protecting their own interests

But let's not be naïve here. The parties listed above are not selfless Samaritans driven by the highest moral values in their support for the Syrians' fight against the dictator. They are pursuing their own political and economic goals.

For example, the Gulf States of Qatar and Saudi Arabia need democracy in Syria about as much as they need more sand and sunshine. If Sunni-led countries are throwing their weight behind the Syrian opposition, their objective is to weaken Shia Iran.

Nevertheless, this talk of dark foreign forces is conspiracy rhetoric in its purest form. The rebellion in Syria against the Assad regime was not planned abroad; it is an outpouring of frustration felt by Syrians, a desperation that has been building up for decades. They have had enough of repression at the hands of a police state where the power elite feathers its own nest. The rebellion was born of the people's desire for freedom and social justice. The revolt comes from the very heart of the people.

But the conspiracy rhetoric is having an effect. The Assad regime has not yet been ousted for one primary reason, namely because important groups in the country still back the dictator and his system. They perceive the Assad clan as a protective power that is only acting in the interests of the country and preventing Syria from collapse. 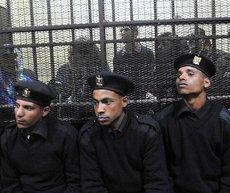 The subversive influence of foreign powers is a theme in several Arab countries including Egypt, where police raided the offices of NGOs in late 2011, claiming that they were being illegally funded from abroad

​​One only has to look back over Arab history to see why the seeds of this big story are being sewn, taking root and flourishing on such fertile ground. It is, for example, very well explained in a book that has just been published in German, Die Araber (The Arabs), by Eugene Rogan. In this work, the Oxford historian traces the history of Arab nations since the Ottomans assumed dominance of the region in the early sixteenth century. He speaks here of a "cycle of subordination to other peoples' rules".

Rogan's history of the Arab world focuses primarily on how the region has been dominated by foreign powers over the course of several centuries. First it was the Ottomans, who governed from Istanbul. Then came the British and the French, who played an inglorious role first and foremost in Damascus after World War One and carved up the region as they saw fit.

They were later replaced by the Americans. In the eyes of many Arabs, the war against Saddam Hussein after the 9/11 attacks on New York and Washington only served to confirm the evil doings of these dark foreign forces. This is even understandable, because in this case interests were asserted that were contrary to the invaders' own moral standards.

It is therefore hardly surprising that this big story finds huge audiences in other Arab nations too, for example in Egypt. The Konrad Adenauer Foundation in Cairo is feeling the effects. For 30 years, the organisation has been working to promote democracy in Egypt. Now its directors are facing criminal charges because the foundation has apparently been financing its activities with illegal money, i.e. money that came from abroad.

When it comes to outside influence, the sensitivity of the people is evident all over Cairo. It is often heard said that only Egyptians are making decisions on Egypt's future now – not foreigners. 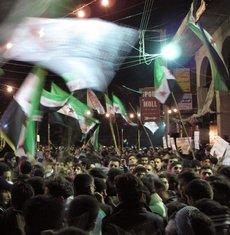 "Born of the people's desire for freedom and social justice": Jan Kuhlmann is convinced that the uprising against the Assad regime was not planned from abroad, but was caused by a sense of frustration and desperation that had been building up for decades

​​﻿As much as this striving for independence is understandable, in the twenty-first century it is inopportune if it renders trans-national cooperation impossible. And it is unacceptable if it flies in the face of democracy. The Cairo trial against the Adenauer Foundation and other NGOs was instigated by Faisa Abul Naga, the Egyptian Minister for International Cooperation. It should be noted that she also served in the cabinet of ousted President Hosni Mubarak.

This is the old system battling it out against democracy; an old system whose representatives, lest it be forgotten, led a very pleasant life financed by billions from foreign sources; a system that still relies on those funds. It can safely be said that Egypt's generals would not like to have to do without the 1.3 billion dollars in military aid they receive from Washington.

The Islamists and radical Salafists are also fond of stirring up a negative public view of any interference from abroad. The Salafist preacher Mohamed Hassan, for example, was applauded several weeks ago when he called on Egyptians to donate money as a substitute for the US military aid.

One might perhaps think that it is a good thing that someone is at last prepared to back up his words with concrete action. But of course, this is just a populist at work. No one can seriously doubt that Islamist and Salafist forces in Egypt and elsewhere receive generous funding from the Gulf States.

But whether we're talking about Egypt or Syria: the big story is a powerful weapon. No physical weapon, no matter how powerful it might be, can destroy it. Of course there has to be a discussion over whether foreign countries should come to the aid of the Syrian opposition with arms shipments or even with military intervention. To rule out options such as these bolsters the fortunes of just one person: the dictator.

And nevertheless: while violence alone might end this conflict, it will not pacify the nation. Whoever wants to be victorious in the Syrian conflict must explode the big story and win over the minds of the people.

Home
Print
Newsletter
More on this topic
Syria: Plea for a Humanitarian InterventionFerhad Ahma of the Syrian National Council in Germany: ''People Are Demonstrating All over the Country''Start of the Trial against NGO Staff in Egypt: A Bizarre and Legally Controversial Case
Related Topics
Arab Spring, Arabellion, Egypt Revolution 2011, Islam and democracy, Media in the Arab World, Syrian Civil War
All Topics

The disappearance of Razan Zeitouneh and her colleagues has been one of the greatest mysteries of the Syrian war – until today. DW's investigative unit hunted clues across six ... END_OF_DOCUMENT_TOKEN_TO_BE_REPLACED

How can the various realities of Kurdish life, shaped by depression, resistance and war, be depicted in art? This is the question addressed by the “bê welat – the unexpected ... END_OF_DOCUMENT_TOKEN_TO_BE_REPLACED

Millions of people in Syria's Idlib region depend on foreign aid that passes through only one border crossing. The UN mandate regulating passage through it will expire on 10 July ... END_OF_DOCUMENT_TOKEN_TO_BE_REPLACED

They’ve already got the Louvre; they’ll soon have a Guggenheim Museum as well – and now the Emirates have added literature to their quest for cultural supremacy in the Arab world ... END_OF_DOCUMENT_TOKEN_TO_BE_REPLACED

By stage-managing his re-election in a poll widely dismissed as a farce, Syria's President Bashar al-Assad has killed two birds with one stone: he has forced his compatriots to ... END_OF_DOCUMENT_TOKEN_TO_BE_REPLACED

END_OF_DOCUMENT_TOKEN_TO_BE_REPLACED
Social media
and networks
Subscribe to our
newsletter