Contemporary Art from Saudi Arabia
The Kaaba as a Security Zone

A new generation of young Saudi artists is emerging, showing that momentum for change is possible even in a conservative country such as this. When it comes to exhibiting their work however, they have only been able to do that abroad. Werner Bloch reports

​​ Saudi Arabia is not exactly regarded as a haven for human rights. Between the Persian Gulf and the Red Sea, any criticism of King Abdullah can easily lead to torture, prison or even a death sentence. Women are not even allowed to take a driving test here. And of the 19 men involved in the 9/11 attacks, 15 came from Saudi Arabia, among them Osama bin Laden. Arts and culture also have a hard time of it here.

But small miracles do occur, and one particular wave of artistic activity that appears to be flourishing well can be appreciated at present at the Soho House Gallery in Berlin's Mitte district. The work of these artists is characterised by an original language, critical statements and a creative imagination that can hold its own with that of driving artists in any other country.

The arts and moderate Islam

Six years ago, British artist Steven Stapleton took a bumpy bus ride across the Arabian Peninsula and made an astonishing discovery: That even in Saudi Arabia there are artists – people, most of whom have never left the country, but who have developed their very own kind of artistic style in the towns and villages. It was a journey that resulted in the initiative "Edge of Arabia" – an artists' group which now even counts a princess from the royal household among its members. 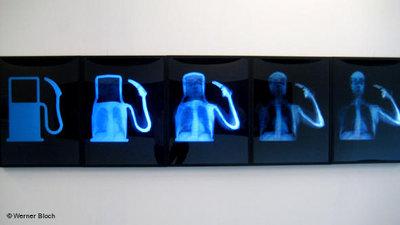 Critical Art Made in Saudi Arabia: Ahmed Matter's art produces a critical voice against the country's suicidal dependency on oil

​​ Curator Rami Farook, who lives in Dubai, leaves no doubt that the group also has a political message: "We aim to show the identity crisis currently gripping the Islamic world. I'm afraid that extreme Islam is gaining the upper hand, but I speak for moderate elements in Saudi society – and for art, which also wants exactly this kind of moderate Islam."

Doctor by day, artist in his free time

Saudi artists have, almost overnight, found a strong language of form. Ahmed Matter, for example. He works with unusual materials – x-rays and magnetism. Matter is not a full-time artist, he earns his living as a hospital doctor. But he creates fantastic art. And the art he produces is a critical voice against the insanity of oil dependency and the oil production that has had a decisive impact on the region as a whole.

Abdelnassr Ghareem: Saudia Arabia's best-known artist works as a soldier in his regular job who last winter fought on the front with Northern Yemen

​​ Matter's works of art have the power to suddenly captivate the beholder from the first moment. The petrol pump, for example. In a succession of images, it is gradually transformed into the body of a human being – in blue-tinted x-ray pictures of the head and upper body. And the pump nozzle itself becomes a pistol, which the spectral human figure holds to its head – a portent and probably also a criticism of the Saudi government, which places reckless emphasis on oil exports.

The best-known among these Saudi artists is Abdelnassr Ghareem, whose works have already been on show in Sharjah and Berlin. He is also not a professional artist in the western sense, but in regular life – a soldier. He takes part in exercises every day with his company, and last winter he fought on the front with Northern Yemen. He is an artist in his free time – but he is not complaining about that.

"There are practically no galleries in Saudi Arabia, no museums, no art books," he says. "I said to myself: Well, I don't really need all that. I'll exhibit my art wherever I find people, on the streets. I'm the first to put on performances in Saudi Arabia. Performances are powerful – what Mahatma Ghandi did was also a performance, regardless of whether he had intended it to be or not. My role as an artist: I can be a spark." 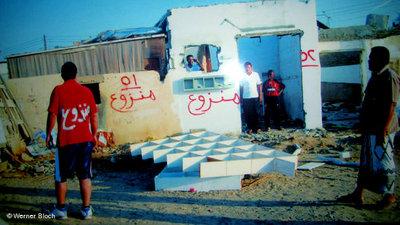 ​​ Ghareem's art has a social conscience. For example, he used his art to fight for the preservation of a village earmarked for demolition by the government. He distributed, and wore himself, a T-shirt printed with the words "ready for demolition", thereby showing that the planned measure would not only clear houses, but also displace people.

A mass of people under suspicion

The artist also created a replica of a Mecca archway that all Muslims must pass through on the Hadj, or pilgrimage. But within his imitation of this opulently decorated archway, the artist installed a metal detector that checks every Muslim for weapons, just as is routine at airports. This turns the Kaaba, the most holy place, into a kind of security zone, and Muslims are presented as a mass of people under suspicion.

Could this critical exhibition also be shown in Saudi Arabia? No, it could not, says curator Sami Farook, and adds: not yet. It is time for more open attitudes in Saudi Arabia, he says, but "Edge of Arabia" initially aims to send out a positive signal from abroad.

END_OF_DOCUMENT_TOKEN_TO_BE_REPLACED
Social media
and networks
Subscribe to our
newsletter