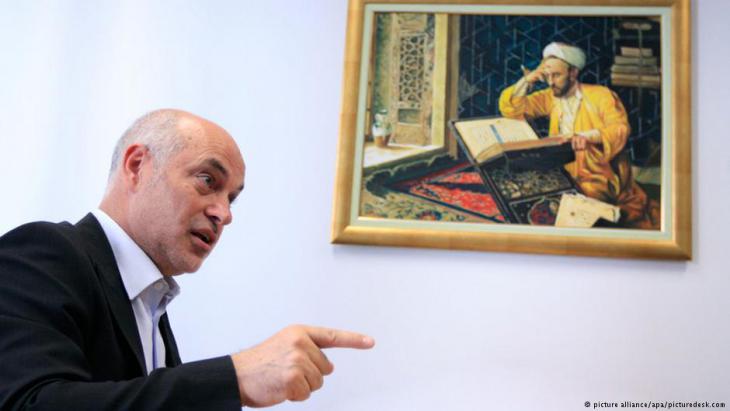 According to a report in the Austrian weekly ′Falter′, Professor Ednan Aslan is said to have allowed civil servants working for the Austrian Foreign and Integration Minister Sebastian Kurz to manipulate his findings for political ends. Allegations he vehemently denies. A commission has now been set up to investigate. By Canan Topcu

When Professor Ednan Aslan took to the lectern at the Goethe University in Frankfurt last Thursday to give a lecture, he appeared relaxed. He remained poised throughout the subsequent discussion about a 'European brand of Islam'. Yet Ednan Aslan is a man under fire. Professor Susanne Schroeter, head of the Frankfurt Research Center on Global Islam (FFGI), had organised the event involving Aslan, an academic in the field of religious education based in Vienna, a long time previously, well before the debate about what has become known as Aslan's 'kindergarten study' began.

The interest of some of the people who came to listen to Aslan's lecture may indeed have been piqued by the 'revelations' in the Viennese weekly 'Falter' (with an audience of over 60 people, attendance was certainly higher than expected). Nevertheless, it was interesting to note that the allegation that the kindergarten study had been manipulated by politicians was not raised by anyone in the audience, even though Professor Aslan himself suggested at the start of the event that the matter be discussed in the course of the evening.

At the end of the official part of the evening, Aslan responded to a question as to whether the study was, as claimed by 'Falter', 'doctored' by civil servants working in the Ministry of Integration with his knowledge. According to 'Falter', relevant WORD documents were made available to journalists by people 'working in academia'. Falter says that the 'track changes' function in these files shows just how much ministry staff 'changed the content and not just the style' of the study to 'better suit one of Minister Kurz's main election campaign themes'.

The accusation levelled at Professor Aslan, who is head of the Institute for Islamic Studies at the University of Vienna, was that civil servants in the Ministry of Integration changed – with his knowledge – the content of the kindergarten study to suit Sebastian Kurz, minister for foreign affairs and integration.

The academic reacted to the accusations via Twitter almost as soon as 'Falter' hit the news stands. Again, on Thursday, he explained that he stands fully behind the content of the study: 'The study about Muslim kindergartens is my study,' he said.

Aslan is critical of the methods of Falter editor-in-chief Florian Klenk. Klenk asked for a meeting with Aslan, showed him a few pages and asked him to explain the changes in the document and to say who had changed the relevant passages and why. 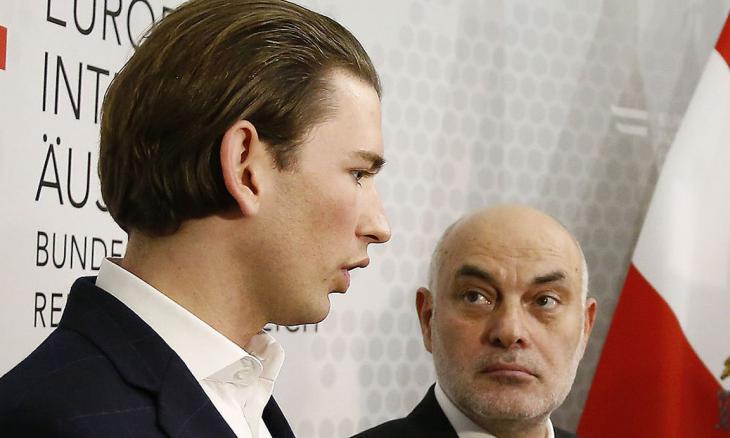 As a favour to Sebastian Kurz? The accusation levelled at Professor Aslan, director of the Institute for Islamic Studies at the University of Vienna: civil servants in the Ministry of Integration changed – with his knowledge – the content of the kindergarten study to suit Sebastian Kurz, minister for foreign affairs and integration

Aslan says that he was unable to give Klenk an answer on the spot because ″the study was published 18 months ago and I don't have every single detail in my head.″ He went on to say that the publication's accusation that the study was manipulated by politicians has less to do with him than with the upcoming elections in Austria: ″Some people want to knock Sebastian Kurz off his pedestal,″ he says. Opinion polls indicate that the Minister for Foreign Affairs and Integration's chances of becoming Austria's next chancellor are good.

But last week's 'Falter' article was not the first time the academic's study had come in for criticism. In December 2015, without consulting Aslan, Minister Kurz forwarded an interim report to the yellow press, causing ill-feeling in Muslim communities in particular.

The Islamic Faith Community in Austria (IGGO) criticised the fact that Islamic kindergartens had been singled out for a study. Fuat Sanac, president of the IGGO said: ″In a democratic country, it is undemocratic and also dangerous to classify citizens according to their faith. Pointing the finger at one group is inhuman.″

Since the report in 'Falter', the debate about Professor Aslan and his study has focused on different aspects, depending on the medium in question. Some articles criticise his academic approach. For example, speaking in an interview with the Austrian daily broadsheet 'Der Standard' Andrea Schaffar, communications scientist, social scientist and lecturer at the University of Vienna, said that Aslan's study has ″nothing to do″ with research and has ″above all major methodological shortcomings.″ ″It is not transparent; there is no information about the sources that were used, the kindergartens that were selected,″ said Schaffer.

For his part, the Viennese sociologist and head of the research consultancy Think Difference, Kenan Dogan Gungor describes as ″regrettable″ the discussion of the question as to 'the sloppy or tendentious way the kindergarten study was written'. As far as he is concerned, the study has done untold damage to the discussion about the negative situations in certain Islamic communities and kindergartens, a discussion which he says must be conducted calmly, properly and on the basis of sound arguments. Posting on his Facebook page, Gungor wrote: ″Despite all the justified criticism of the study, I would prefer the critics to apply the same critical attitude to the identification and denunciation of problematic, undesirable developments in parts of the Muslim community.″ 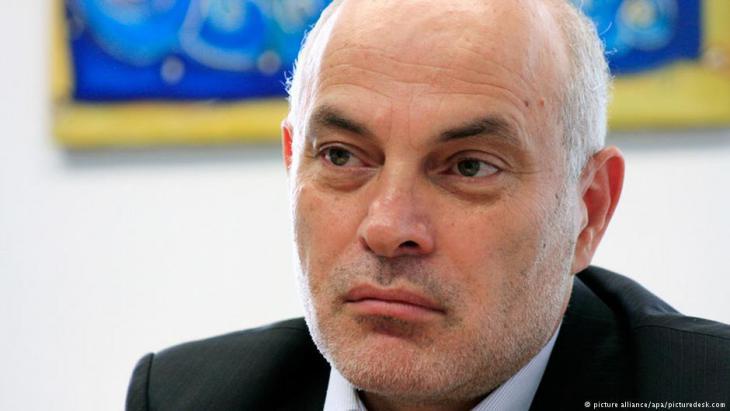 In a tight spot: evidencing Aslan′s sloppy academic practice, the Austrian Standard recently revealed that plagiarism researchers have discovered evidence of plagiarism in three out of five chapters of Aslan′s doctoral dissertation, which he submitted to the University of Klagenfurt in 1997

The case of Ednan Aslan is also being discussed in social networks and on blogs. In some Muslim groups, there is obvious delight at the negative coverage about the academic. It is no secret that Aslan in a thorn in the side of many Muslim groups. He himself says that this is because he asks uncomfortable questions and highlights negative developments in the communities. The fact that he wants to trigger debates within the Islamic community about whether extremism does not indeed have something to do with Islamic theology makes him unpopular, he says.

In order to investigate the allegations made by the media against Professor Aslan and his kindergarten study, the University of Vienna has set up a commission. This ombuds-committee, which seeks to discover whether sound academic practices were observed, as the university says on its website, is currently checking both the evidence and the accusations of academic wrong-doing. The intention is to examine all facts in order to determine ″the extent to which the rules of good academic practice were observed″. The university says that the commission will report to the rector ″in the near future″.

Professor Mouhanad Khorchide has also commented on the allegations against Aslan and his study. Before Khorchide, an academic in the field of religious education, was made head of the Centre for Islamic Theology at the University of Munster, he worked at the Viennese institute. He said that in academia, it is undoubtedly ″dishonest″ for a researcher to manipulate a study ″for whatever reason and in whatever way″.

However, ″in this present case involving the kindergarten study, we only have partial information from the press and conflicting statements,″ he says. Khorchide goes on to say that it is not helpful to speculate one way or the other before the commission has published its results. ″In principle, however, the presumption of innocence – which is also an Islamic commandment – is paramount.″ Regardless of the allegations that have been made, Khorchide says that the quality of Islamic kindergartens in Vienna is a valid issue and that a catalogue of criteria to ensure quality urgently needs to be drawn up.

Aslan himself is not at all offended by the steps his university has chosen to take. On the contrary, he says, it is very much in his interest that the commission examines the allegations made against him. He says that he has handed over all documents and files he has on the study. This will allow the commission to determine who made what changes and when. Aslan himself assumes that the results will be made available in two weeks.

Home
Print
Newsletter
More on this topic
Austria′s president and the Islamophobia debate: The courage of one manThe Islam debate: The dual consciousness of MuslimsInterview with the political scientist Farid Hafez: "An expression of institutional Islamophobia"
Related Topics
Education, European Islam, Islam in Europe, Mouhanad Khorchide, Muslims in the West
All Topics

Even in times of war and pandemic, refugees are still being deported to Afghanistan. Several deportation flights have taken place in recent weeks alone. Since those affected often ... END_OF_DOCUMENT_TOKEN_TO_BE_REPLACED

On 7 March, Switzerland became the latest European country to vote in favour of a so-called "burka" ban. It was yet another feather in the cap of the right-wing populist Swiss ... END_OF_DOCUMENT_TOKEN_TO_BE_REPLACED

What drives young men into the arms of Islamist extremists – and how can they be re-integrated into society? Five years after the deadly attacks in Paris, urgent questions remain ... END_OF_DOCUMENT_TOKEN_TO_BE_REPLACED

Austria's chancellor is seeking to criminalise "political Islam". The move would put non-violent, non-radical Muslims under blanket suspicion and is hardly helpful in the fight ... END_OF_DOCUMENT_TOKEN_TO_BE_REPLACED

Rather than suspecting Muslims in general, we need to co-operate more with Islamic scholars, Muslim congregations and associations, writes Muhammad Sameer Murtaza in his ... END_OF_DOCUMENT_TOKEN_TO_BE_REPLACED

END_OF_DOCUMENT_TOKEN_TO_BE_REPLACED
Social media
and networks
Subscribe to our
newsletter