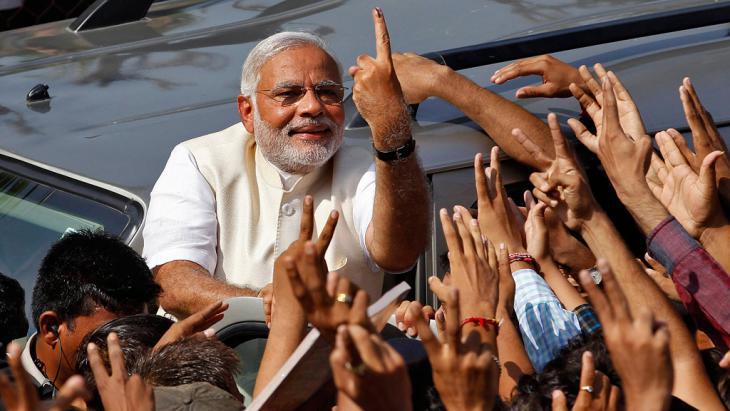 Conversion of Christians and Muslims in India
Homecoming or forced conversion?

A heated controversy has been triggered in India over a Hindu nationalist campaign to bring Christians and Muslims "back into the Hindu fold". While the Hindu nationalist Prime Minister Narendra Modi remains silent over the issue, organisations allied to his party continue to pursue the campaign. By Ulrich von Schwerin

The Hindu nationalists are calling it a "homecoming", but Muslims and Christians say it is forced conversion. Since a series of public ceremonies during which large groups of Christians and Muslims were converted to Hinduism, a heated controversy has been raging in India over the legitimacy and legality of these mass conversions, which are organised by Hindu nationalists. The debate has assumed a particularly explosive dimension because of the fact that the Hindu nationalist "Bharatiya Janata Party" (BJP) is India's governing party in New Delhi.

The current debate was triggered by a ceremony in a slum in the northern Indian city of Agra. Most of the residents of this neighbourhood are Muslim migrants from Bengal in eastern India, who make a living collecting refuse. According to Indian media reports, they were invited to a meeting on 8 December to – so it was claimed – be registered for welfare benefits. As the crowd gathered, they were astonished to see statues of deities being put up and to hear the first notes of a religious song being played. At the end of the ritual they were told that from that moment on, they were Hindus.

This was not just a one-off event. In recent weeks, there have been almost daily reports of further ceremonies where Christians and Muslims were converted to Hinduism. Although the Hindu nationalist "Vishva Hindu Parishad" (VHP) and the "Dharam Jagaran Samiti" (DJS), the main actors behind the campaign, stress that participation is voluntary, there are repeated claims that those involved are being put under pressure or that they have been promised money, land or other perks.

While Prime Minister Narendra Modi remains true to his electoral promise to focus on economic development and is refraining from making any public comment on the conversions, critics are accusing him and his party of promoting the campaign. Even though the VHP and DJS are formally independent of the governing BJP, they are all members of the Hindu-nationalist family – what's known as the "Sangh Parivar" – which has at its centre the militant volunteer movement known as "Rashtriya Swayamsevak Sangh" (RSS). 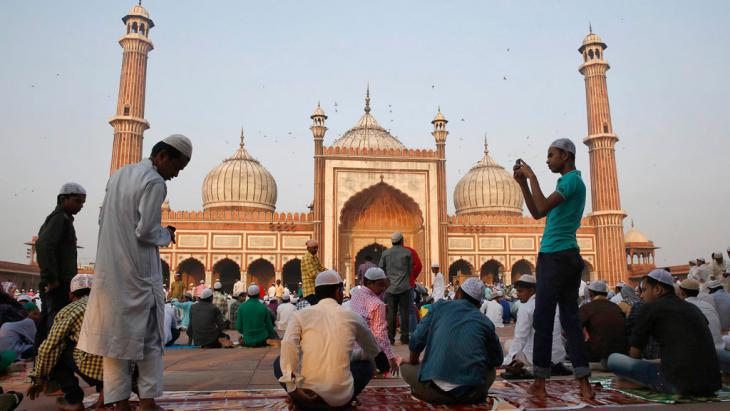 India's Muslims under pressure to convert: Hindu nationalists in India believe that the country's Muslims and Christians are in truth Hindus who relinquished their faith because they were either compelled to do so by Muslim conquerors or ensnared by Christian missionaries. The fact that this faith change often happened generations ago is overlooked by the Hindu nationalists, who view this not as a conversion, but as a return to the original faith

Founded in 1925, the RSS perceives itself as the seed and the spearhead of a future, reformed Hindu nation. Trained as paramilitaries, organised in a hierarchical fashion and indoctrinated over several years, RSS members in their uniform of black caps, white shirts and khaki coloured shorts form the backbone of the subsidiary organisations founded since the 1950s such as the VHP, the DJS or the BJP. They not only share the same ideology, a large portion of the cadres of these parties is also drawn from the ranks of the RSS – Prime Minister Modi included.

For Hindu nationalists, when Christians or Muslims change their faith to Hinduism, it is not a conversion but a "homecoming" (ghar wapsi). As they see it, Muslims and Christians in India are in truth Hindus who relinquished their faith because they were compelled to do so by Muslim conquerors or ensnared by Christian missionaries. The fact that this faith change often happened generations ago is overlooked by the Hindu nationalists, who view this not as a conversion, but as a return to the original faith.

In accordance with their own logic, it is only consistent that the BJP is currently and emphatically demanding a general ban on conversions. A regulation in the western Indian state of Gujarat, a state governed by Modi for years, could serve as a model for the planned law. In Gujarat, which experienced some of the bloodiest anti-Muslim pogroms of recent Indian history in early 2002 during Modi's period in office there, a regulation requiring all conversions to be officially approved by the authorities has been in place since 2003.

Although India is over 80 per cent Hindu and Christians form a tiny majority of two per cent, the RSS has been warning since its foundation that the Hindus are slowly "dying out". In their eyes, India is the nation of Hindus. According to their concept of the nation, Christians and Muslims can never be completely Indian and are always suspected of having divided loyalties.

The chief ideologist of the Hindu nationalists Vinayak Damodar Savarkar wrote in his influential 1921 book "Hindutva: Who is a Hindu?": "For though Hindusthan to them is Fatherland as to any other Hindu, yet it is not to them a Holyland too. Their holyland is far off in Arabia or Palestine. Their mythology and Godmen, ideas and heroes are not the children of this soil. Consequently their names and their outlook smack of foreign origin. Their love is divided." 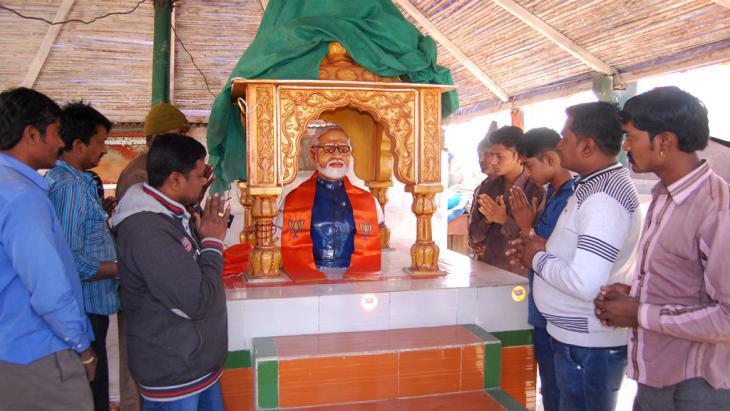 Revered by some as a deity: Indian villagers assemble and pray by an effigy of Narendra Modi at a temple erected in his honour at Kotharia village near Rajkot. Since Modi and his Hindu nationalist Indian People's Party took office last May, there have been increasing reports of the forced conversion of religious minorities to Hinduism by radical Hindu organisations. These openly propagate the idea of a "Muslim and Christian-free India" on social networking sites

It was the view of the second RSS leader, Madhav Sadashiv Golwalkar, that there is no place in India for Christians and Muslims. In his view, the only options open to them are conversion or total subordination. Golwalkar wrote in his 1939 book "We, or our Nationhood defined", (in which he also described the disfranchisement of the Jews in Germany as a model for dealing with minorities):

"The non-Hindu peoples in Hindusthan must either adopt the Hindu culture and language, must learn to respect and hold in reverence the Hindu religion (…), or they may stay in the country, wholly subordinated to the Hindu nation, claiming nothing, deserving no privileges, far less any preferential treatment – not even citizens' rights."

Such radical views are not expressed by today's RSS leadership. But amid the controversy surrounding the conversions in Agra, the local DJS Chairman Rajeshwar Singh said in mid-December: "It is our goal to make India a Hindu nation by 2021. Christians and Muslims have no right to remain here. Either they are converted to Hinduism or forced to leave." Singh went on to promise that he would ensure that India was free of Muslims and Christians by the end of 2021.

While the secular opposition is outraged, Modi remains silent. The PM barely issues any statements on central Hindu nationalist issues any more. Instead, he remains wholly focused on development and the economy, presenting himself as a liberal reformer. This is paying off – and not just at the polling booth. If Modi was regarded as a pariah in the West after 2002, these days he is even being courted by the likes of US President Barack Obama, who visited New Delhi in late January.

But have Modi and the BJP really changed? The left-wing magazine "Frontline" doesn't think so, and claims that Modi is and remains an RSS activist: "He is himself a part of them, and thinks and talks in the same way as they do. He cannot tame the hard core, Modi is himself the hard core. (…) Narendra Modi shares the fanatical views of Sangh Parivar, which made him what he is. This explains his deliberate silence during the entire time, as the call to convert rings through the air. Inside he is rejoicing."

Home
Print
Newsletter
More on this topic
India and "Islamic State": Indian Muslims not heeding the siren call of ISIndian Muslims' attitudes to the election of Narendra Modi: Apprehension and hopeInterview with the political theorist Rajeev Bhargava: "The BJP has to give up its obsession with Muslims"Narendra Modi and the Indian Muslims: Divisive figure could become India's next PM
Related Topics
Bharatiya Janata Party (BJP), Christians in the Islamic world, Converts | religious conversion, Dialogue of Religions, Freedom of religion, Islamophobia, Muslim minorities, Narendra Modi
All Topics

Hindu fundamentalist Ashok Sharma has devoted his life to championing the deeds of an Indian "patriot": not revered independence hero Mahatma Gandhi, but the man who shot him dead END_OF_DOCUMENT_TOKEN_TO_BE_REPLACED

At the end of every year, the team at Qantara.de gives you a run-down of the ten most-read articles on the site over the past 12 months. Here is a quick overview of the stories ... END_OF_DOCUMENT_TOKEN_TO_BE_REPLACED

COP27 in Sharm el-Sheikh is turning into a PR disaster for Egypt’s military regime. Instead of praise for the host, the news is full of solidarity for imprisoned activist Alaa ... END_OF_DOCUMENT_TOKEN_TO_BE_REPLACED

India is projected to see an explosion in its urban population in the coming decades, but its cities already cannot cope and climate change will make living conditions harsher ... END_OF_DOCUMENT_TOKEN_TO_BE_REPLACED
Author:
Ulrich von Schwerin
Date:
Mail:
Send via mail

END_OF_DOCUMENT_TOKEN_TO_BE_REPLACED
Social media
and networks
Subscribe to our
newsletter