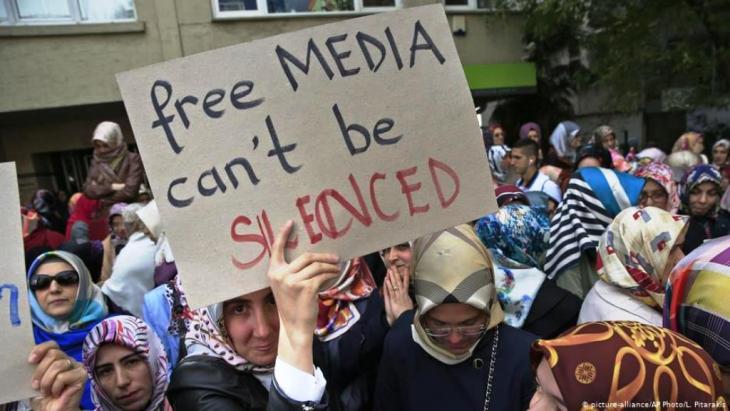 Is the Turkish president Erdogan using the fight against coronavirus to silence the few remaining critical press voices in the country? Opposition and journalists fear a new wave of censorship. By Daniel Derya Bellut

Fear is mounting among Turkey's journalists. For many, the current climate is reminiscent of the aftermath of the attempted coup in July 2016, when Turkish President Recep Tayyip Erdogan cracked down on critics and opposition figures in an unprecedented wave of arrests.

Just a week ago, Turkish media reports cited the president as saying after a cabinet meeting that the country had to be rescued not only from the coronavirus but from "all media and political viruses, too," referring to journalists and critics from opposition parties.

Erdogan said that instead of contributing to the fight against the pandemic, journalists were "throwing up" false information and untruths and were thus more dangerous than the virus itself. He accused the opposition media of "waging a war against their own country" and working "night and day to break the nation's morale," warning that they would "drown in their own pools of hatred and intrigues along with terrorist organisations."

The president has been repeatedly criticised for stamping on press freedom. While Turkey rose three places to 154th on thelatest Reporters Without Borders (RSF) press freedom rankings, this was attributed to "other countries falling". 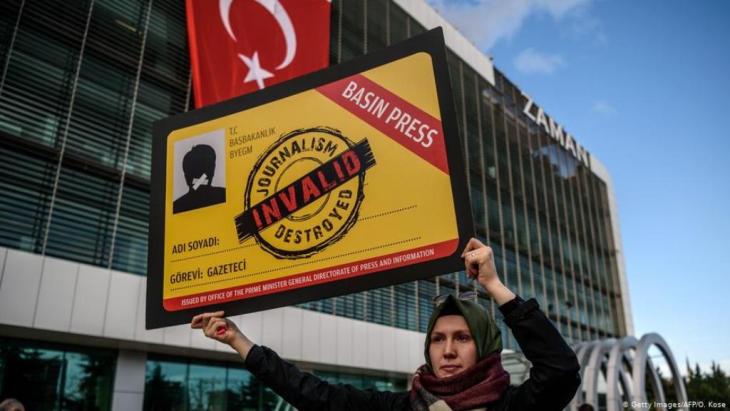 Press freedom under pressure: according to Reporters Without Borders, the censorship of the Turkish media is stronger than ever before. The organisation also criticised the high number of imprisoned journalists in Turkey. In the 2020 Press Freedom Index, Turkey ranks 154th out of a total of 180 countries

"Until no critical voice is left"

Baris Yarkadas, a journalist and former parliamentarian from the Republican People's Party (CHP), the biggest opposition party in Turkey, says that the president is disturbed by independent journalists questioning the government's positive spin on its approach to coronavirus pandemic. "He sees journalists who give facts to the public as viruses that have to be destroyed," Yardakas says.

Erol Onderoglu, a representative for Reporters Without Borders, said that even though there were very few independent television stations and newspapers left in Turkey, they were a thorn in the government's side, which would continue its persecution of them "until no critical voice is left" at all.

According to the Turkish Health Ministry, there are currently some 86,000 cases of coronavirus in the country. For weeks, there has been a nationwide debate about the adequacy of the restrictions that have been put in place to combat the virus' spread.

Istanbul mayor Ekrem Imamoglu, who is from the political opposition, has argued, for example, that 48-hour lockdowns such as the one last weekend are not effective.

From the start of the crisis, the government has reacted very sensitively to all criticism. Earlier this month, the president himself filed criminal complaints against Fatih Portakal, a popular host on the FOX TV station, who had posted an ironic tweet criticising the government's campaign to raise funds to fight the coronavirus crisis. State-run media accused the journalist of "spreading lies and manipulating the public on social media." 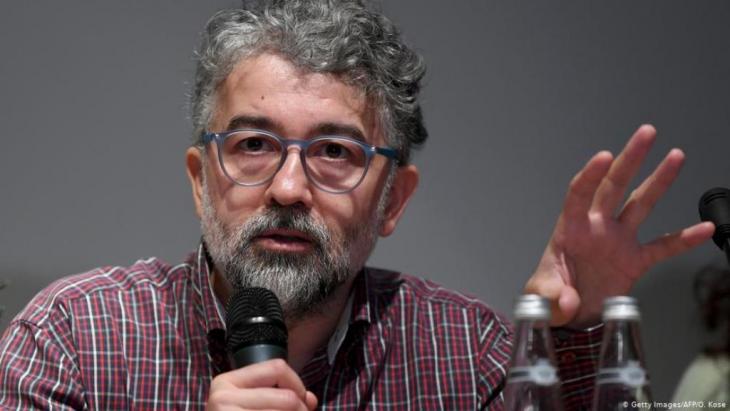 Prospects for independent journalists in Turkey are grim: the arrests, which have already being going on for 18 years, will continue "until not a single critical journalist is left," predicts Turkey's representative of Reporters Without Borders, Erol Onderoglu

In March, the journalists Idris Ozyol and Ebru Kucukaydin were detained and accused of causing panic in Antalya, and an injunction was sought against Mustafa Ozdemir, the editor-in-chief of the local newspaper Halkin Sesi, after it was alleged that he, too, had deliberately caused panic, this time in the town of Zonguldak, and put the lives of people at  risk. Ismet Cigit, the editor-in-chief of another local newspaper in Kocaeli province was arrested in the middle of the night after he had published reports critical of the government.

Authorities also launched an investigation into the journalist Nurcan Baysal after she criticised the shortage of protective masks on Twitter. She explained that the problem now was that "journalists would censor themselves in this climate in order to avoid imprisonment."

"The state is already fuelling their fear very successfully," she said.

No freedom for political prisoners

The recent early release of some 90,000 prisoners, almost a third of the country's prison population, to prevent the spread of coronavirus has also highlighted the toxic relationship between the Turkish press and the government: journalists and political prisoners were excluded from the amnesty.

"For Erdogan, opposition media are even worse than a virus," says Erol Onderoglu from Reporters Without Borders. "The reform shows that the government sees the media more like a plague."

Relations between Turkey and Russia are ambivalent. Moscow is nonetheless trying to prop up the leadership in Ankara. Elections are to be held in Turkey in June – and the last ... END_OF_DOCUMENT_TOKEN_TO_BE_REPLACED

All eyes in Turkey are on a court hearing scheduled for January 30 into a child abuse case that allegedly occurred with the knowledge of one of Istanbul's most powerful Islamic ... END_OF_DOCUMENT_TOKEN_TO_BE_REPLACED

Any reconciliation between Turkey and Syria’s Assad regime would have disastrous consequences for many Syrians, explains Syria expert Kristin Helberg END_OF_DOCUMENT_TOKEN_TO_BE_REPLACED

The poetry of Pir Sultan once prompted uprisings in the Ottoman Empire. To this day, Alevis identify with him. Rainer Hermann visited Mehmet Celebi, a direct descendant of the ... END_OF_DOCUMENT_TOKEN_TO_BE_REPLACED

There are signs of an imminent normalisation of relations between Turkey and Syria. This would allow Erdogan to score political points domestically before the upcoming elections ... END_OF_DOCUMENT_TOKEN_TO_BE_REPLACED

Turkey will mark the centenary of the proclamation of the Turkish republic in October. But 2023 will be an important year in another respect too: Turks will go to the polls in ... END_OF_DOCUMENT_TOKEN_TO_BE_REPLACED
Author:
Daniel Derya Bellut
Date:
Mail:
Send via mail

END_OF_DOCUMENT_TOKEN_TO_BE_REPLACED
Social media
and networks
Subscribe to our
newsletter