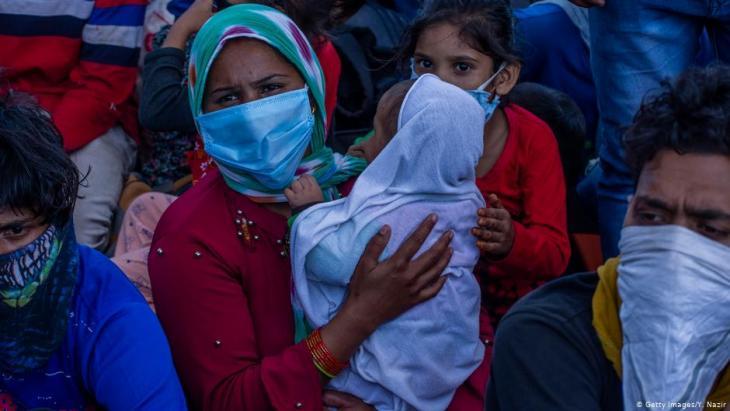 Coronavirus in India
Muslims as scapegoats

On the streets and online, radical Hindu nationalists, including MPs from the ruling BJP party, are agitating against the Muslim minority, inciting hatred and spreading rumours of a "corona jihad": they allege that Muslims are spreading the virus in order to harm India. By Dominik Müller

Only four hours passed between the announcement of a lockdown in India and its enforcement for the country's 1.3 billion inhabitants. Since 24 March, public life has come to a standstill, and public transport is no longer operating. Millions of migrant workers who wanted to leave the cities to return to their villages have been stranded in the middle of nowhere.

"Stay at home, practise social distancing and wash your hands" was the advice given by the Indian government. Although Prime Minister Narendra Modi and his Hindu nationalist BJP party struck the tone their middle-class electorate expected to hear in the face of the coronavirus threat, these precautions utterly failed to consider the situation for the majority of the population. After all, 80 to 90 per cent of Indians work in the informal sector and have neither health nor accident insurance nor a pension scheme.

Most of these workers – many of whom are migrant workers – live in the urban slums, sometimes crammed into a single room with a dozen others. Running water is the exception here. The curfew has made matters even worse for them, because most of them are dependent on their daily wage, living from hand to mouth as unskilled workers on construction sites, rickshaw drivers, street vendors or day labourers in factories.

The majority of the day labourers are Dalits (formerly known as "untouchables") and members of the Muslim minority that makes up 14 per cent of India's population. Since the Hindu nationalists came to power, the latter have repeatedly become the target of discrimination and physical attacks. At the end of last year, the BJP went so far as to pass a new law on naturalisation that openly excludes Muslims. Radical Hindus then used protests against the law as a pretext for violent attacks. 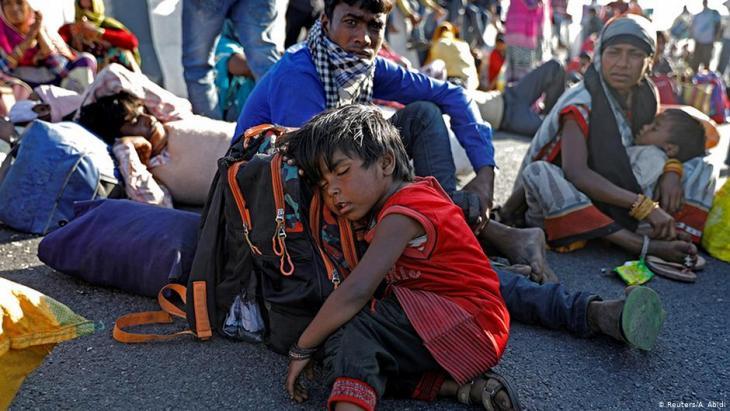 Hardest hit by the pandemic: after PM Narendra Modi announced a lockdown at very short notice, hundreds of thousands of day labourers and migrant workers, who suddenly found themselves out of work, set out to return to their villages and towns. Indian authorities are trying to stem the mass exodus by closing borders and providing provisional mass accommodation. They fear that the exodus will otherwise accelerate and intensify the spread COVID-19 in rural India

The mainstream media has been quick to take up these accusations, reporting that the main contagion hotspot in India is the predominantly Muslim district of Nizamuddin in New Delhi, famous for its Sufi shrines and kebab stands and home to the six-storey headquarters of the Tablighi Jamaat religious community.

A long-planned international congregation took place there from 13 to 15 March, attracting 4,000 participants. Among them were several infected persons, some of whom came from Malaysia and Indonesia. The media reports that half of the attendees stayed at the community headquarters for several days after the end of the official programme. Like the migrant workers, many of them were then taken by surprise by the sudden shutdown and could not return to their villages.

Indian media have been reporting since early April that the other believers went on to spread the virus all over India. There is talk of a "Nizamuddin Coronavirus Trail" stretching from Kashmir to the Adaman Islands. Authorities used mobile phone data, movement profiles and official government databases to identify those who attended the international congregation.

The news agency Reuters has spoken of a veritable "manhunt", which has also been played up in the media. Some Indian states have recruited volunteers to search for the whereabouts of the suspects in villages and towns. By the beginning of April, nearly 500 cases had been directly traced to the pilgrimage meeting. According to the Ministry of the Interior, 9,000 people connected with the Tablighi congregation in Delhi are currently in quarantine.

Mujeeb ur Rehman, a spokesman for Tablighi Jamaat, has refuted the accusations: "India already had hundreds of cases at that time. So it would be wrong to say that our meeting was a major source of the virus outbreak in the country." 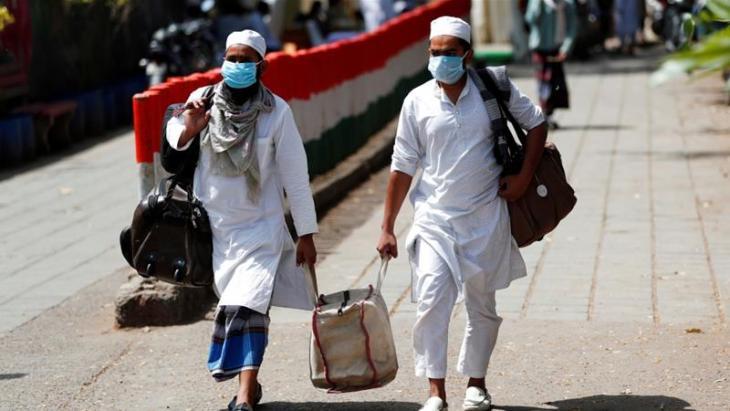 Decried by Hindu nationalists as a "corona factory", the predominantly Muslim district of Nizamuddin in New Delhi has long been a hotspot for tension between the Hindu and Muslim communities – even prior to the pandemic. Over 40 people were killed just a few weeks ago, when Hindu Nationalists attacked Muslims demonstrating against India’s new citizenship laws

And indeed, the Indian government had already registered 50 persons infected with COVID-19 as of 10 March. Despite international warnings, however, the government was still declaring as late as 13 March that there was no health emergency in India. Many mass religious events were still taking place in mid-March, such as a pilgrimage festival attended by 40,000 worshippers at the Tirupati Temple in southern India on 17 and 18 March.

Diverting attention from the mistakes of the ruling party

"The Modi government has deliberately tried to dramatise and highlight the Tablighi Jamaat affair," says Achin Vanaik, Dean Emeritus of Political Science at the University of Delhi and author of the book "The Rise of Hindu Authoritarianism". The regime has made "tracking and locating the participants in the Tablighi meeting in Delhi its highest priority". No other mass event has received this degree of attention from the authorities and the media, says Vanaik.

"The message of the Hindu nationalists that Muslims are once again the main threat distracts from the government's failures," Vanaik continued. The fact is that the regime hesitated far too long before it was even prepared to take action. Moreover, just like other governments, it has ended up undermining the public health system in recent years with its neoliberal policies. Above all, says Vanaik, the government has failed to respond in any way to the plight of migrant workers who are stranded all over India and not adequately provided for.

A witch hunt against Muslim pilgrims

The seeds sown by the Hindu nationalists have fallen on fertile ground: individual doctors are refusing to treat Muslims, radical Hindus are attacking mosques, a vigilante group in a district neighbouring Nizamuddin has erected barricades, two dozen migrant workers were attacked by an armed mob in the state of Assam, and in Karnataka villagers beat up Muslims because they were supposedly "coronavirus spreaders".

In an open letter, several Indian intellectuals cite a veritable "witch hunt against the attendees of the Nizamuddin congregation". They urge that "the attendees should be identified without criminalising them and put into quarantine as per norms." The virus, they write, does not care about religious or national differences: "The solution will not come through the pursuit of various agendas but through scientific endeavours and human solidarity".

Pakistan and India have fought three wars and countless skirmishes, but as summers get hotter with climate change, their peoples are united by love for a cooling 115-year-old pink ... END_OF_DOCUMENT_TOKEN_TO_BE_REPLACED

Anger in the Middle East is spreading over comments made by an official of India's ruling BJP about the Prophet Muhammad, with various countries summoning New Delhi's envoy and a ... END_OF_DOCUMENT_TOKEN_TO_BE_REPLACED

Heavy rains and storms are causing huge floods and high water in both countries. Tens of thousands of people have had to leave their homes so far. ... END_OF_DOCUMENT_TOKEN_TO_BE_REPLACED

As the scorching sun beat down on his fruit cart, Mohammad Ikrar dreaded another day of tossing out dozens of rotting mangoes and melons – a regular practice now, as India ... END_OF_DOCUMENT_TOKEN_TO_BE_REPLACED

Twenty-eight-year-old photojournalist Masrat Zahra documents the situation in India-administered Kashmir with her camera. In this interview with Elisa Rheinheimer, she talks about ... END_OF_DOCUMENT_TOKEN_TO_BE_REPLACED
Author:
Dominik Müller
Date:
Mail:
Send via mail

END_OF_DOCUMENT_TOKEN_TO_BE_REPLACED
Social media
and networks
Subscribe to our
newsletter