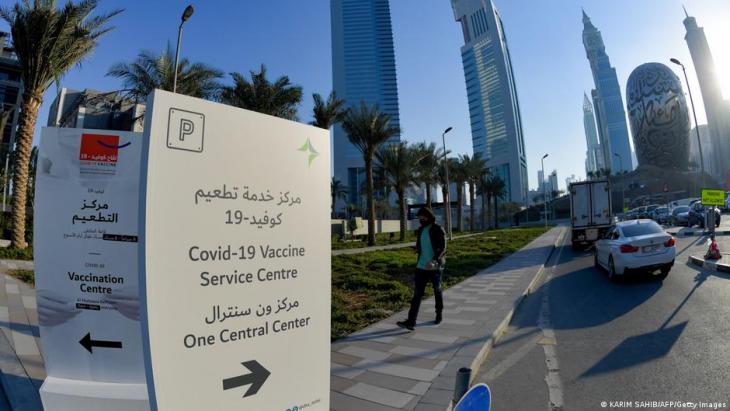 Despite media reports to the contrary, travel agents say there's no such thing as vaccine tourism in Dubai right now. Currently only residents and nationals may access vaccinations there. But, they add, that could change. By Cathrin Schaer & Gasia Ohanes

Unless you happen to have a connection to a royal family in the United Arab Emirates, you're unlikely to be able to jump the queue for a COVID-19 vaccination while on vacation in Dubai anytime soon. "It's just media hype," one German travel agent replied when asked if it was possible to take a vaccination-inclusive holiday there. "There is no vaccine tourism in Dubai – at least, not yet."

"Only Emirates residents can get a vaccination," a tourism operator in Dubai said. "We just organise holidays here. But I can give you the number of the Dubai health authority and you can ask them."

"I can book the flight and the hotel but I have no idea about the vaccination," a travel agent in Lebanon said.

Vaccinations in Dubai, the largest of the seven emirates that make up the United Arab Emirates, or UAE, began in December. By mid-March, the UAE had vaccinated over 60% of its population of about 10 million. This means the emirate has one of the fastest vaccination roll-outs in the world and Dubai officials have stated that the whole adult population should have been vaccinated by the end of 2021.

Dubai re-opened to tourists in July 2020 – its all-important tourism sector directly contributed 11.5% to GDP in 2019 – but right now the rules are clear. Only residents and nationals may access vaccinations there. This is despite recent reports in international media that wealthy elites from outside the country have been able to do exactly that.

A February report in British newspapers suggested an upmarket concierge service based in the UK, the Knightsbridge Circle, could organise luxury holidays to Dubai, that would include a vaccination. 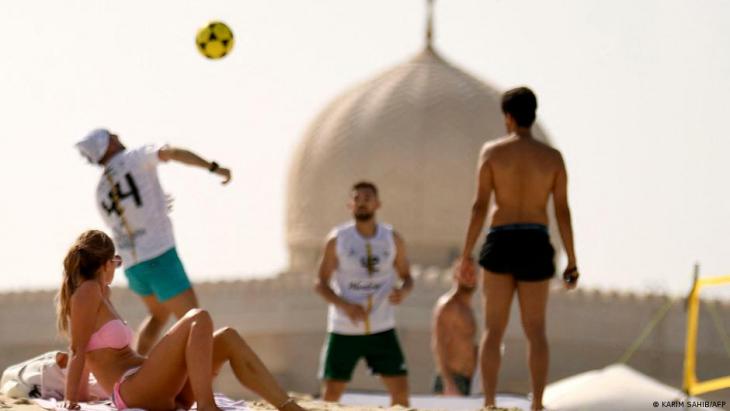 Travel industry insiders think it's only a matter of time before Dubai, which already sells itself as a safe holiday destination, starts using its success with COVID-19 vaccinations to entice foreigners back to the emirate. "As soon as the whole population is vaccinated, it will change," said one German travel operator working in Dubai and Munich. "If the authorities are smart, they will use the vaccine to kickstart tourism"

When questioned by journalists, the service said it had only provided these services to UAE residents. The Knightsbridge Circle also said it was able to organise access to the Sinopharm vaccine for foreigners in Dubai at the cost of £10,000 (around €11,640, or $13,874) but refused to give further details.

Today Britons over 50 are eligible to be vaccinated in their home country, so it's hard to know why they would go all the way to Dubai for this.

Other headlines were made by well-connected bankers, executives and even members of the Spanish royal family who travelled to the UAE and allegedly used contacts with senior officials or the royal family to get access to vaccinations. This included the head of Canada's largest pension fund, Mark Machin, who resigned in February after being vaccinated in Dubai despite his own government's advice not to travel.

Politicians from the Middle East have also caused public outcry after they had been vaccinated in Dubai. But usually they either accessed the medicines because they held a dual residency or high-ranking contacts.

In March, vaccinations in Dubai were opened up to anyone aged 40 and over holding a Dubai residency visa. They are already available to all UAE natives, aged over 16; there are only around a million of the latter as most of the population are foreigners. In Dubai, a city of just over 3 million, there are three different vaccines in use – the Chinese-made Sinopharm, BioNTech-Pfizer originally from Germany, and Oxford-AstraZeneca, developed in the UK – in 120 vaccination centres and clinics.

In fact, the only ostensible way for most people to access the vaccine in Dubai is by becoming a resident. This became much easier recently, thanks to a campaign that encourages foreigners to work remotely from Dubai for a year.

"Why stay at home when you can work from Dubai?" the campaign material says, before adding that besides tax-free living, "you are eligible to receive the COVID-19 vaccination in line with the government's roll out programme." The campaign was launched in October last year. If you earn over $5,000 per month (around €4,200), you can apply for a 12-month visa to work from Dubai. The application fee is US$287 (around €240).

Although he didn't have exact numbers, a spokesperson at Dubai Tourism revealed that the campaign has been so successful that there have been some delays in application processing. Authorities were working on it but it might take up to a fortnight to receive an answer, he warned.

Should your application be successful, you and your family would eventually receive resident's ID cards, which would then allow you access to the UAE vaccination programme. You would also receive a multi-entry visa for the UAE so you could return home if you wished.

This might look a little like vaccine tourism, but in fact the campaign is just the latest move by Dubai to try and entice more expats to live there. The vast majority of Dubai's population consists of foreigners whose residencies are often tied to their work there. Due to pandemic-related job losses, many international residents were forced to leave and this month, ratings agency, S&P Global, reported that Dubai's population had fallen by 8.4% over 2020.

Still, travel industry insiders think it's only a matter of time before Dubai, which already sells itself as a safe holiday destination, starts using its success with COVID-19 vaccinations to entice foreigners back to the emirate. Also worth noting: UAE authorities have said they plan to begin manufacturing the Sinopharm vaccine themselves during 2021.

"As soon as the whole population is vaccinated, it will change," Olaf Fey, a German travel operator working in Dubai and Munich, told the Frankfurter Allgemeine newspaper this past weekend when asked about vaccine tourism. "If the authorities are smart, they will use the vaccine to kickstart tourism."

A source in the travel business who works with the Dubai government believes Fey may have a point. "Right now there is no such thing as vaccine tourism here," the source, who could not be named because they were not authorised to comment, admitted. "But that doesn't mean that there won't be something like that later this year, somewhere. Because the vaccine rollout is so slow in the EU, people will want this and I wouldn't be surprised if it happens eventually."

As Qatar prepares to host the 2022 FIFA World Cup, the country has come under fire for its treatment of migrant workers, with some nations calling for a boycott of the contest. ... END_OF_DOCUMENT_TOKEN_TO_BE_REPLACED

German Middle East analyst Guido Steinberg and television journalist Ulrich Tilgner have both published new books on the conflicts in the Middle East. Their analyses and their ... END_OF_DOCUMENT_TOKEN_TO_BE_REPLACED

Televised Turkish dramas are all the rage in the Middle East. A young Ottoman TV Empire has been expanding its soft power by harnessing regional dialects, Arabic names and viewers ... END_OF_DOCUMENT_TOKEN_TO_BE_REPLACED

EU parliamentarian Dietmar Koester criticises the Union's failure to speak up when faced with human rights abuses committed by its Middle Eastern allies, while pointing out that ... END_OF_DOCUMENT_TOKEN_TO_BE_REPLACED

END_OF_DOCUMENT_TOKEN_TO_BE_REPLACED
Social media
and networks
Subscribe to our
newsletter