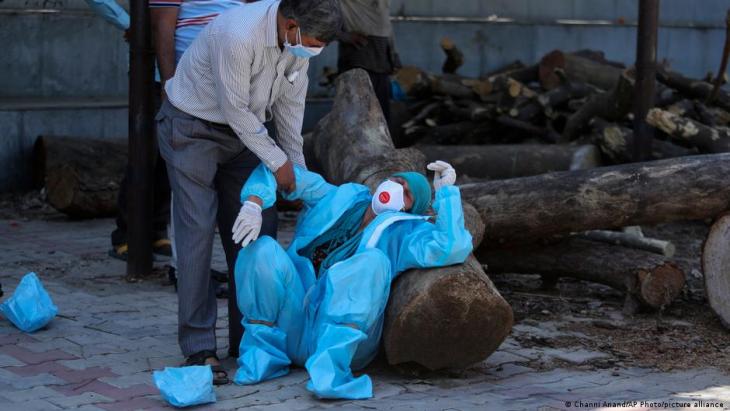 India hits record numbers of COVID-19 infections worldwide for the sixth day running, as health systems buckle under the pressure, and shortages of medical oxygen and hospital beds lead to more deaths. In the worst-ever outbreak, the country has been logging over 300,000 cases since 22 April, surpassing the previous highest one-day spike of around 300,300 cases in the USA in January 2021

Much needed medical supplies poured into India on Tuesday as overrun hospitals turned away patients due to a shortage of beds and oxygen supplies and a surge of infections pushed the COVID-19 death toll towards 200,000.

A shipment of medical supplies from Britain, including 100 ventilators and 95 oxygen concentrators, arrived in Delhi early on Tuesday, Reuters partner ANI reported. France is also sending oxygen generators that can provide year-long oxygen for 250 beds, the embassy said.

Pakistan has also offered medical supplies to arch-rival India amid a new devastating wave of COVID-19, following a recent thaw in relations between the nuclear-armed neighbours. "As a gesture of solidarity with the people of India in the wake of the current wave of COVID-19, Pakistan has offered to provide relief support to India including ventilators," the Foreign Ministry said in a statement at the weekend.

International cooperation at work! Appreciate the shipment of vital medical supplies from including 100 ventilators & 95 oxygen concentrators that arrived early this morning. pic.twitter.com/MBZFwSn4cH

The first train for Delhi carrying around 70 tonnes of the life-saving gas from the eastern state of Chhattisgarh also reached the national capital early on Tuesday. But the crisis in the metropolis of 20 million people, the epicentre of the latest wave of infections, continued unabated.

Dr K.Preetham, chief of medical administration at Delhi's Indian Spinal Injuries Centre, said the scarcity of oxygen was the main concern. "For seven days, most of us haven't slept. Because of the scarcity, we are forced to put two patients on one cylinder and this is a time consuming process because we don't have long tubes," he said.

Rijo M John, a professor and health economist at the Indian Institute of Management in the southern state of Kerala, said the drop in cases was largely due to a fall in testing. "This should not be taken as an indication of falling cases, rather a matter of missing out on too many positive cases!" he said on Twitter.

Elsewhere in the capital, images showed the bodies of COVID victims burning on funeral pyres set up in rows, the earth between them scorched by embers and littered with ash.

"So many people are dying because they are unable to get the most basic services," Vinod Kumar told journalists outside a Delhi hospital as he tried to buy medication for a sick family member. "This government has failed us so much." 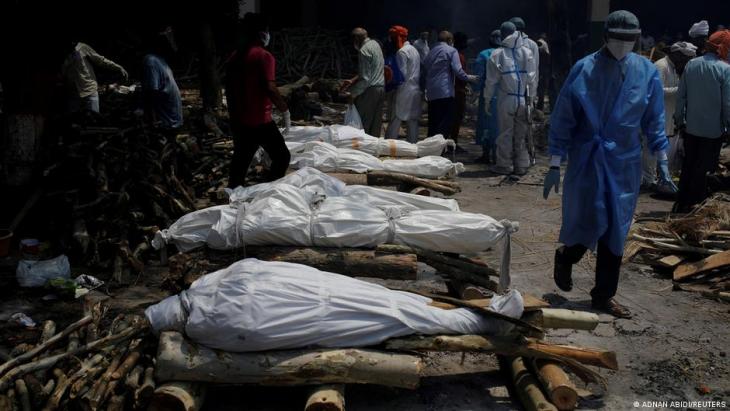 In India, more than 350,000 infections were reported within 24 hours on Monday, more than any country has reported in that timespan. With its 1.3 billion inhabitants, India has recorded a total of more than 17 million infections. "So many people are dying because they are unable to get the most basic services," Vinod Kumar told journalists outside a Delhi hospital as he tried to buy medication for a sick family member. "This government has failed us so much"

World Health Organization chief Tedros Adhanom Ghebreyesus on Monday described the situation in India as "beyond heartbreaking". The organisation has however warned against jumping to conclusions about a new coronavirus variant discovered in India, saying it had not yet classified it as worrying.

A WHO spokeswoman said that it was not clear at this point to what extent the variant was responsible for the rapid increase in cases in India in recent months. There are many factors that could have contributed to this, she said. For example, festivals and other events with many participants may have accelerated infections. The British coronavirus variant may also be a relevant factor in India's epidemiological situation.

"Worse before it gets better"

India has called on its armed forces to help tackle the devastating crisis. Chief of Defence Staff General Bipin Rawat said late on Monday that oxygen would be released from armed forces reserves and retired medical personnel would join struggling health facilities.

Prime Minister Narendra Modi has urged all citizens to get vaccinated and exercise caution amid the "storm" of infections.

In some of India's worst-hit cities, bodies were being cremated in makeshift facilities in parks and parking lots. Critically ill patients lay on beds outside overwhelmed hospitals waiting for admission. India has been adding hospital beds by turning hotels, railway coaches and ashrams into critical care facilities, but experts warn the next crisis will be a shortage of doctors and nurses.

"Unfortunately beds do not treat patients – doctors, nurses and paramedics do," said Dr Devi Shetty, a cardiac surgeon and chairman of the Narayana Health chain of hospitals.

The Indian Medical Association said private hospitals in the western city of Surat in Gujarat state will have to shut if they do not get oxygen supplies soon. 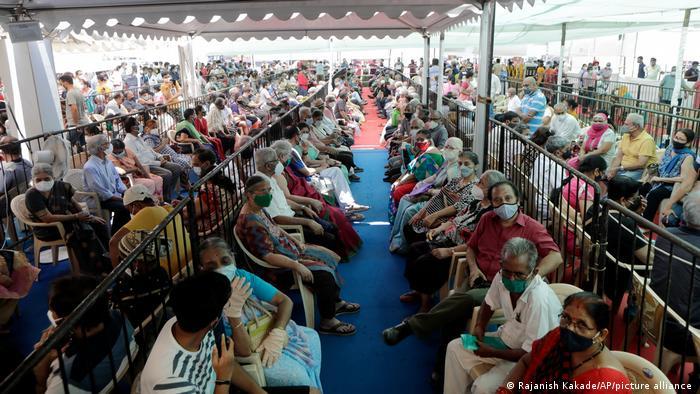 Vaccination – a race against time: the British, South African and Brazilian variants of COVID-19 have all been classified by the WHO as "variants of concern". According to the WHO, a variant is considered worrying if it spreads more easily, causes more serious cases of the disease, bypasses the immune system or reduces the effectiveness of known treatments. The newest variant was first detected in India on 1 December 2020

"All patients will have to be shifted to government hospitals. We fear a law and order situation might ensue," the association said in a letter to Chief Minister Vijay Rupani.

The U.S. Chamber of Commerce warned the Indian economy, the world's sixth largest, could falter as a result of the spike in cases, creating a drag for the global economy. "We expect that this could get worse before it gets better," admitted Myron Brilliant, executive vice president of the Chamber, the biggest U.S. business lobby.

Vaccine demand has outpaced supply in India, with companies struggling to boost output, partly because of a shortage of raw materials and a fire at a facility making the AstraZeneca shot. India's worst-hit state of Maharashtra, home to the financial capital Mumbai, could postpone inoculation for those between the ages of 18-45 amid supply uncertainties, a government official said. India plans to open up vaccination to all adults from 1 May.

U.S. President Joe Biden announced on Monday the United States would send up to 60 million doses of the AstraZeneca COVID-19 vaccine abroad. White House spokeswoman Jen Psaki said the recipient countries had not yet been decided and that the administration was still formulating its distribution plan.

But India appeared to be a leading contender after Biden spoke with his counterpart Prime Minister Narendra Modi -- whose Hindu-nationalist government is under fire for allowing mass gatherings such as religious festivals and political rallies in recent weeks.

"India was there for us, and we will be there for them," Biden tweeted after the call with Modi, referencing India's support for the United States when it was enduring the worst of its COVID crisis.

"Major lobbying is on at this point of time to secure as much as possible for India," a senior Indian official part of ongoing negotiations revealed, adding that Modi had been assured that India would be given priority.

Indians cut off from the rest of the world

However many nations have also sought to close borders to travellers from India, fearful of a variant that appears to be one of the drivers of the surge.

Australia paused direct passenger flights from India until 15 May, the latest on a growing list of countries to impose curbs to prevent more virulent virus variants from entering their borders. Prime Minister Scott Morrison said the suspension would remain in place until mid-May at least, due to "clearly present" risks of travel from India.

Indian spinner Ravichandran Ashwin also pulled out of the popular Twenty20 competition. "My family and extended family are putting up a fight against COVID-19 and I want to support them during these tough times," Ashwin said on Twitter.

The book "The Invention of the Maghreb: between Africa and the Middle East" prompts us to review basic terminology. This includes terms that we use almost every day as if they are ... END_OF_DOCUMENT_TOKEN_TO_BE_REPLACED

Asmaa al-Atawna's debut novel "Missing Picture" has been published in German translation (Keine Luft zum Atmen – Mein Weg in die Freiheit). In it, she describes life in Gaza from ... END_OF_DOCUMENT_TOKEN_TO_BE_REPLACED

Lebanon was long viewed as the Switzerland of the Middle East. Until relatively recently, billions were deposited in its banks. Gulf states were among the foremost investors in ... END_OF_DOCUMENT_TOKEN_TO_BE_REPLACED

To celebrate the bicentenary of the deciphering of the Rosetta Stone, the British Museum is running an exhibition entitled "Hieroglyphs: unlocking ancient Egypt" until February ... END_OF_DOCUMENT_TOKEN_TO_BE_REPLACED

Since Russia invaded Ukraine, Europe has been trying to find alternatives to Russian gas, inevitably zeroing in on the Arab Gulf states. In his commentary, Yemeni politician ... END_OF_DOCUMENT_TOKEN_TO_BE_REPLACED

Nouara may be 65, but she is ready to join thousands of others who burn their ID and pay traffickers for the chance of a new life in Europe. Zineb Bettayeb reports END_OF_DOCUMENT_TOKEN_TO_BE_REPLACED
Date:
Mail:
Send via mail

END_OF_DOCUMENT_TOKEN_TO_BE_REPLACED
Social media
and networks
Subscribe to our
newsletter