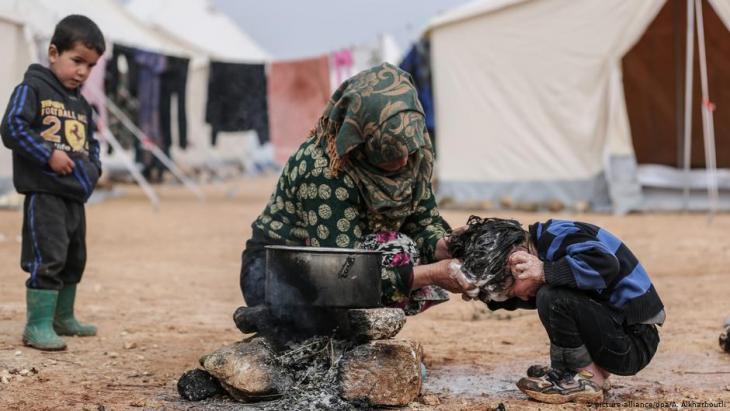 No soap, hardly any water and no space to quarantine: in Idlib there is growing concern over the possible spread of coronavirus. A women's centre there is trying to educate people. Diana Hodali reports

The new enemy has not yet arrived in northern Syria, at least not officially. But fears that COVID-19 will also reach the Idlib region are on the rise. The new coronavirus is already in the country. "Only" five people are believed to be infected – at least, that's all the Syrian Health Ministry has confirmed so far.

These past weeks, people in Idlib have not had to fear bomb attacks by the regime and its ally, Russia – there is a temporary ceasefire. More than a million people have fled their houses and villages in the province since the government's military offensive began in December 2019, most of them women and children. They are all displaced in their own country, some for the second, third or fourth time, living in temporary camps under extremely difficult conditions.

More often than not, 10 people share a few square meters in a tent, sleeping, eating and living at close quarters. Washing hands and keeping a physical distance are simply not possible in the overcrowded camps. Quarantine is not an option.

"How can I tell these people to keep their distance?" asks Huda Khayti, director of the Women Support and Empowerment Centre Idlib and head of an awareness campaign on COVID-19. "These people barely have access to clean water, there are few toilets for far too many people and there are no masks, no gloves."

Washing hands and keeping physical distance are simply not possible in the overcrowded camps. Quarantine is not an option. Some cannot shower themselves and their children for days, hourly hand washing is illusory. What state their immune systems is anyone's guess. 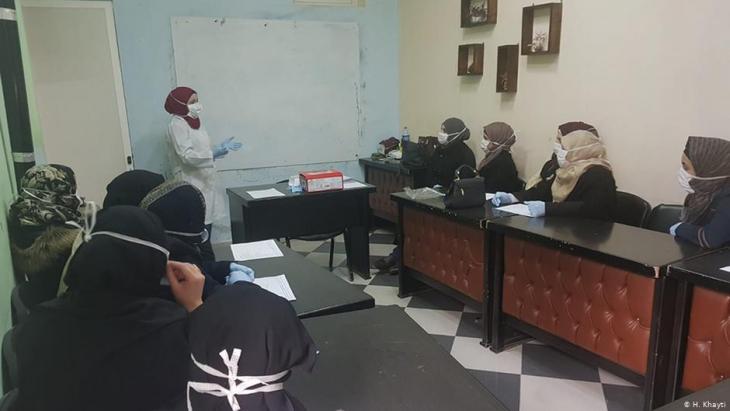 It would be a disaster if the coronavirus pandemic reached Idlib, says Misty Buswell, a spokeswoman for the International Rescue Committee (IRC). "An outbreak would be devastating for thousands whose health status is already compromised due to lack of sufficient food, clean water and exposure to cold weather," she adds.

For if even countries with functioning health systems are already completely overburdened, the people in the Idlib war zone with its fragile health system are bound to be particularly affected. "We have very poor medical care," says Khayti.

Any reconciliation between Turkey and Syria’s Assad regime would have disastrous consequences for many Syrians, explains Syria expert Kristin Helberg END_OF_DOCUMENT_TOKEN_TO_BE_REPLACED

There are signs of an imminent normalisation of relations between Turkey and Syria. This would allow Erdogan to score political points domestically before the upcoming elections ... END_OF_DOCUMENT_TOKEN_TO_BE_REPLACED

As Syrian camps housing families of Islamic State fighters get more dangerous, there are calls to bring children out, even if the mothers don't want to go. The idea of separating ... END_OF_DOCUMENT_TOKEN_TO_BE_REPLACED

Where are the measures to deal with the looming challenges facing the Arab world? In this commentary, Marwan Muasher warns that the region is in grave danger of falling behind ... END_OF_DOCUMENT_TOKEN_TO_BE_REPLACED

At the end of every year, the team at Qantara.de gives you a run-down of the ten most-read articles on the site over the past 12 months. Here is a quick overview of the stories ... END_OF_DOCUMENT_TOKEN_TO_BE_REPLACED

Social engagement is often motivated by religious factors. A new book explores the background to these community efforts and appraises how effective they are in helping to ... END_OF_DOCUMENT_TOKEN_TO_BE_REPLACED
Author:
Diana Hodali
Date:
Mail:
Send via mail

END_OF_DOCUMENT_TOKEN_TO_BE_REPLACED
Social media
and networks
Subscribe to our
newsletter