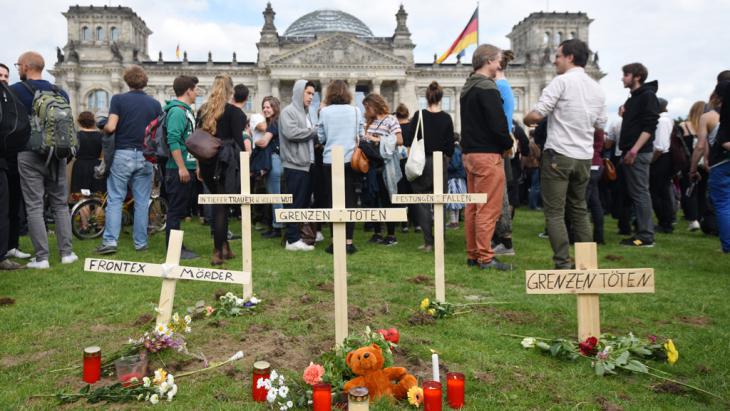 With the burial in Berlin of a refugee previously exhumed in Italy, the "Center for Political Beauty" art collective registered its opposition to EU refugee policies. The first in a series of controversial actions has triggered heated debate across the country. By Heike Mund

"The dead are coming" may sound like the title of a horror film, but in actual fact it was the name given to a collective artistic intervention. A coffin allegedly containing the remains of a Syrian woman who had drowned trying to reach Europe via the Mediterranean was buried in the presence of an imam in the Muslim section of the Gatow cemetery in Berlin. Her body had been exhumed in Italy.

This Syrian woman's fate is shared by many others. Along with her husband and three children, she fled from Damascus and crossed through Sudan, Egypt and Libya. They couldn't reach Europe through Turkey, as access was blocked by a meter-thick wall of barbed wire. When their boat capsized in the Mediterranean, the mother and her two-year-old daughter died. According to the artists, her husband and two surviving sons are currently in Germany, awaiting a decision on their asylum claim.

The artistic intervention was staged to protest the tightening of the EU's refugee policy, as Center for Political Beauty (ZPS) spokesman Justus Lenz explained: "Germany is one of the richest countries in the world. Germany's bureaucracy has the means to take care of the problem - and is doing nothing."

Politicians were also invited to the event, which had attracted a great deal of media attention. A seating plan was set up for the government officials on the guest list. Interior Minister Thomas de Maizière and his wife, along with Chancellor Angela Merkel and her husband, were to sit in the first row, and speeches were prepared for them. None of them came. 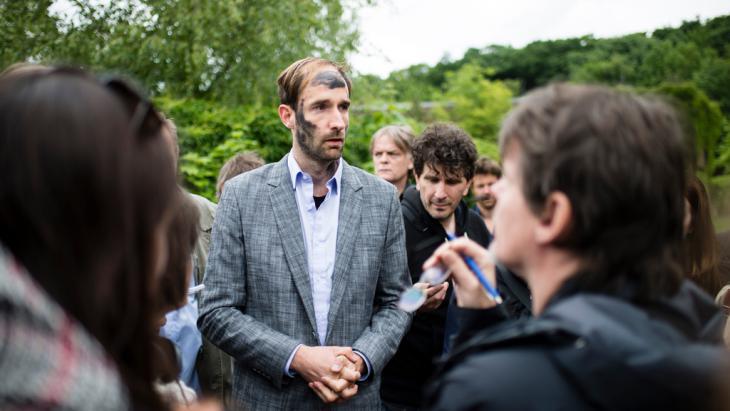 With its artistic activism, the Center for Political Beauty aims to draw attention to the indifference of politics to the global refugee crisis and perceives its protest actions as a form of "aggressive humanism". The initiators campaign first and foremost for a "more beautiful German foreign policy" that allows a dignified burial for refugees who die trying to reach Europe, says the collective's artistic director Philipp Ruch

The artists' collective describes itself in the city's official association register as a "storm troop for the establishment of moral beauty, political poetry and human liberality," and includes the statement: "Art must hurt, irritate and resist." Rupert Neudeck, co-founder of the non-profit refugee assistance association "Cap Anamur - Deutsche Not-Ärzte e.V." (German Emergency Doctors) fully supports the activists. "We need to provide landmarks for German and European public opinion to clearly demonstrate the magnitude of human rights violations happening in the world around us," he said.

Critical comments were voiced even before the burial. In the "Süddeutsche Zeitung" newspaper, Sonja Zekri commented that the campaign borders on "political pornography". She also asked: "What will come next? The Center for Political Beauty has undertaken drastic, but clever campaigns. But this action only highlights the powerlessness of the victims. In truth it is taking away the last thing they have."

In contrast, human rights spokesman for the Green Party Volker Beck was ambivalent. "It is offensive and impious to use dead refugees as an object in an artistic intervention," he said. But Beck also sees a need to improve the political situation. "The European Union must do everything to identify these people." Katja Kipping, leader of the Left Party, deemed the action to be "pushing limits, but that's exactly why it manages to directly hit those sensitive topics." Rupert Neudeck, who is also on the ZPS board of trustees, defended the artists' radical and shocking scenes. "To say that this intervention is controversial is a positive statement. Discussions about such actions are always welcome, also about the one that took place in Berlin," he said.

In cooperation with local imams, priests and gravediggers, the creative activists claim to have exhumed 10 bodies in Italy, Greece and Turkey and transported them to Germany with the express consent of the deceased persons' relatives. The artists wanted the anonymous dead refugees to get a decent burial and "a final resting place", as Philipp Ruch, the leader of the art collective, told the magazine Der Spiegel.

Ruch, who calls himself the centre's chief negotiator, is no political crackpot, but a doctor of philosophy and an established theatre director. He has directed plays for the Maxim Gorki theatre in Berlin, the Theater Dortmund and the Styrian Autumn Festival. In 2012, Ruch and Internet activists from the ZPS were nominated for DW's Blog Award. "Performance art always raises the question of how free art is. Whoever wants to forbid the actions of the Center for Political Beauty doesn't understand modern art," he declared to the press at the time. 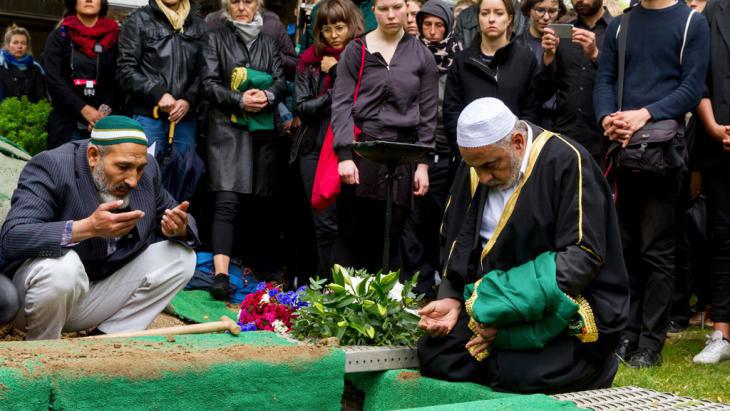 Criticism of radical forms of artistic activism: "The Center for Political Beauty has undertaken drastic, but clever campaigns. But this action only highlights the powerlessness of the victims. In truth it is taking away the last thing they have," writes Sonja Zekri in the "Süddeutsche Zeitung"

Since 2008, ZPS artists have confronted the public with spectacular actions to point out what they believe are blatant political failures. In 2014, they dismantled crosses from a Berlin Wall memorial and reattached them to European border fences. Board member Rupert Neudeck welcomed such actions: "We need these signals to ensure Europe and Germany do not sink into indifference."

Currently, the artists are concerned about the tightening of existing refugee policies, which spokesperson Justus Lenz described as "…an isolation war." The collective's website documents the brutal realities of these policies: drowned refugees, buried anonymously in mass graves. Dead bodies washed up on Italian shores, piled on top of each other in a shabby cold store, a pool of dried blood in front of it. The message is that this is irreconcilable with the dignity that should be afforded to every human being, even after his or her death.

A point also raised by Klaus Staeck, long-time president of the Berlin Academy of Arts: "If we want to be a community of values, then we must also keep our values in mind, and that includes Article 1 of the German Constitution - "human dignity is inviolable." Staeck believes that these values come with social responsibility but remains critical of the current art project in Berlin. Although he sees provocation as a legitimate way to get attention, he questions "provocation just for its own sake." 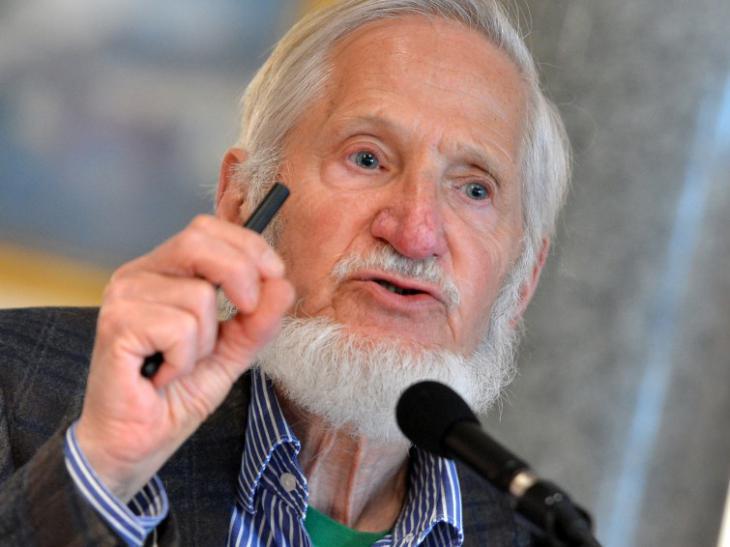 Rupert Neudeck, who personally fought for many years to stimulate public awareness of the controversial refugee problem, sees the provocative art as a good sign: "Society should be glad that it still has such protest potential, which artists can use to make their art visible"

The writer Ingo Schulze, who recently joined 1,000 other authors from 26 countries in signing an appeal to politicians for a more humane refugee policy, said: "I find such actions right in principle, although the details determine whether and how appropriate they really are." He feels Europe carries a historical debt: "Ultimately, the question remains to which extent we, as Europeans, are ready to fulfil our responsibilities and to see this world as one world - and to act accordingly. In the end, it's not just about providing emergency aid, but eliminating the situations that cause people to flee."

The timing of the collective's controversial intervention was deliberate: June 20, 2015 was UN Refugee Day. German victims of flight and expulsion after World War II will officially be commemorated for the first time. Millions of refugees had to find a new home then and were glad to obtain any form of humanitarian aid.

The Berlin funeral is one of a series of upcoming actions by the collective. According to its website, on Sunday (21.06.2015), the "March of the Determined" aims to "lay the foundations for an unprecedented burial ground" for dead immigrants right in front of the Chancellery in Berlin and transform the plaza into "a memorial for the victims of Europe's military isolation." The collective launched a crowdfunding campaign for this particular intervention. Rupert Neudeck, who personally fought for many years to stimulate public awareness of the controversial refugee problem, sees the provocative art as a good sign: "Society should be glad that it still has such protest potential, which artists can use to make their art visible," he said.

Home
Print
Newsletter
More on this topic
After the refugee catastrophe in the Mediterranean: How the EU is killing refugeesSyrian Boat Refugees in Egypt: "Head Straight on to Europe!"Interview with the Egyptian theatre director Ahmed el-Attar: "Art changes thought in the long term"
Related Topics
Democracy and civil society, Human rights, Humanitarian aid, Performing arts, Policy on refugees and migration, Refugees
All Topics

Iranian artist Parastou Forouhar has lived in Germany since 1991. Full of rage, just like the protesters, she hasn't yet given up on the idea of justice. By Julia Hitz END_OF_DOCUMENT_TOKEN_TO_BE_REPLACED

Unflattering terms were used at a German Football Association human rights congress aimed at "intensifying the discussion" ahead of the World Cup. One speaker in particular made ... END_OF_DOCUMENT_TOKEN_TO_BE_REPLACED

Fariduddin Attar’s "The Conference of the Birds", one of the seminal works of Islamic mysticism, has recently been published in sumptuously illustrated German translation. It ... END_OF_DOCUMENT_TOKEN_TO_BE_REPLACED

Egyptian authorities have Mada Masr in their sights once again after critical reporting. But the editor of the country's last independent news source is adamant they will continue ... END_OF_DOCUMENT_TOKEN_TO_BE_REPLACED

Like Christianity, Europe's history is one of migration. Both have strong roots in the Orient and in cultures thousands of years old. Cultural historian Bernhard Braun invites us ... END_OF_DOCUMENT_TOKEN_TO_BE_REPLACED
Author:
Heike Mund
Date:
Mail:
Send via mail

END_OF_DOCUMENT_TOKEN_TO_BE_REPLACED
Social media
and networks
Subscribe to our
newsletter