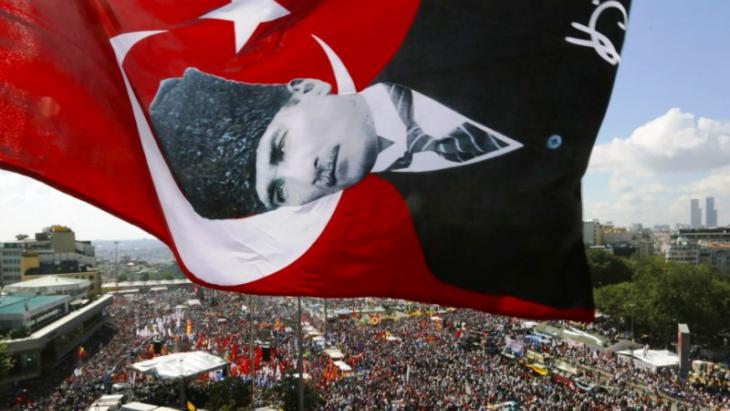 The narrative of an "enlightened" and generally democratic Turkey, a country that is currently in the process of being destroyed by Erdogan, should not go unchallenged, says Tayfun Guttstadt

The political situation in Turkey is clearly dramatic, but it is also equally complicated. Turkish President Erdogan has succeeded in securing levels of power unique in the nation′s history. But is this situation really unique? No – for 15 years, the father of the nation Ataturk ruled alone over the early Republic, which was a one-party nation at the time. Only his untimely death in 1938 deprived him of that power.

Up to that point, Ataturk alone ruled over every conceivable dimension of domestic and foreign policy. Even clothing and music were tailored to his ideas. The aim was the creation of a totally homogenous society: "One people, one language, one flag, one state" – Ataturk′s policies were also moulded by his slogan. Today, this is one of Erdogan′s favourite quotations. The streamlining of one′s own ranks is also not Erdogan′s idea – in Ataturk′s day, even his closest allies could expect to be sacked or even punished should they have opposed their leader.

It is not only Ataturk′s authoritarian legacy – inclusive of a leader cult surrounding his person akin to the religious veneration of saints – that is indivisible from current developments in Turkey, but also his political bequest. This manifests itself in a superficially strict division of state and religion, which at the same time elevates Sunni Islam to the national religion and main pillar of the national character.

For example, during the Ataturk era, Alevism was not even mentioned by name. The widely popular images from the 1930s of women wearing chic mini-skirts should not give rise to the impression that true secularism existed in Turkey – let alone democracy or freedom of speech in any form. 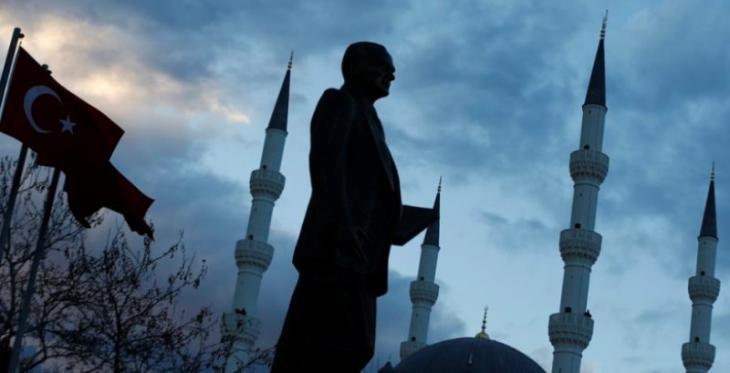 Haunted by the past: it is not only Ataturk′s authoritarian legacy – inclusive of a leader cult surrounding his person akin to the religious veneration of saints – that is indivisible from current developments in Turkey, but also his political bequest. This manifests itself in a superficially strict division of state and religion, which at the same time elevates Sunni Islam to the national religion and main pillar of the national character

Hostility towards Kurds and Christians are also among the core elements of Kemalism. All these aspects – leader cult, the merging of Sunni Islam and Turkishness, xenophobia, respect for authority – are elements beneficial to Erdogan′s power expansion plans.

Although Europe should be aware of all this for the most part, an increasing number of commentaries, articles and reports are appearing in German and western media in general, in which the pre-Erdogan Turkey is romanticised as a democratic state – for example in a recent article published in the Frankfurter Rundschau, which extensively quotes two former Turkish NATO generals.

The issue of torture comes up several times, a threat faced by purported rebels in Turkey at the present time – with no mention of the crimes of the Turkish military and a tally of victims that far exceeds figures so far clocked up during the Erdogan era. This is a blatant mockery in view of the hundreds of thousands of victims of the extremely brutal military regime, "the guardian of the secular values of the Republic" – and its torture practices.

The documentary film "Haymatloz", which has been given a consistently positive reception in Germany, draws a highly condensed and romanticised picture. The film is about the mainly German-Jewish academics and artists who sought refuge from conditions in Germany in Ataturk′s republic and found working conditions there to be very rewarding.

But Turkey did not accept these people because it wanted to help them, but rather it wanted to become "western" at any price and relied heavily on support from European professionals. The early republic was not the knight in shining armour suggested by the film and also in the official writing of history.

The early Republic was anti-Semitic, anti-Christian and highly nationalistic. Apart from the afore-mentioned individuals and their families (no more than a few hundred people in total), Turkey did not take in any European Jews fleeing from the Nazis and the country′s Jewish citizens were themselves systematically marginalised, driven into poverty and their language and identity repressed.

Yet in the film "Haymatloz", the descendants of those refugee academics and artists from Germany – who are naturally very grateful to Turkey – are allowed to air their views without comment as they heap praise on the policies of Ataturk.

Even the daughter of Ismet Inonu, Ataturk′s equally authoritarian successor nicknamed Milli Sef, or "National Chief", is allowed to praise Kemalist Turkey to the heavens and rant about how bad things have become. Imagine: the wife of Bashar Assad is consulted as interview partner on the situation in Syria – and her views are aired without criticism or comment, underscored with romantic images. 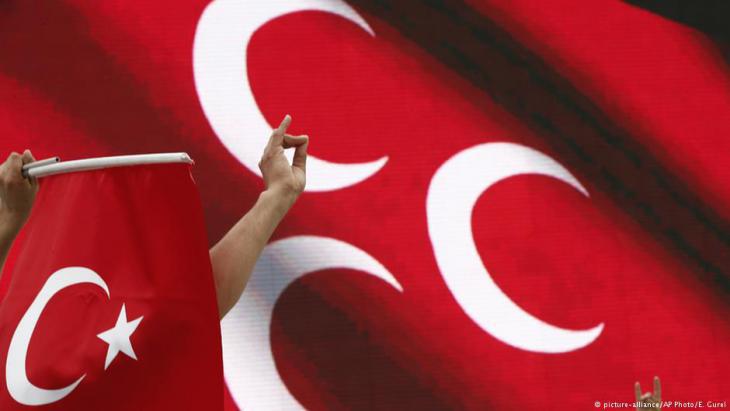 Supporters of the right-wing, anti-Kurdish MHP: "many, especially from the secular-nationalistic camp, had for a long time accused the AKP of being too lax in its dealings with the Kurdish movement. The AKP has fulfilled these demands for a return to war," writes Tayfun Guttstadt

In focusing on Erdogan, it is all too often overlooked that the entire Turkish political spectrum expressly supports the highly repressive policies against the Kurds – many, especially from the secular-nationalistic camp, had for a long time accused the AKP of  being too lax in its dealings with the Kurdish movement. The AKP has fulfilled these demands for a return to war.

The decidedly anti-western course involving consideration of an alliance with Russia and Iran (a direction referred to "Eurasian" in Turkey), pursued by Erdogan for some time now, is taking place in co-operation with and with the goodwill of extreme nationalistic, secular forces.

If one considers policy approaches to the millions of refugees from Syria, the AKP even appears to be the only party offering something largely sensible, despite all the political point scoring.

All other parties, including left-wing movements, believe that all Syrians are jihadists and should be deported back to Syria as soon as possible, because they are simply hanging around in Turkey at the cost of the taxpayer and Assad could never ever be that bad.

For the reasons outlined here, it is my view that the narrative of an "enlightened" and generally democratic Turkey that is in the process of being destroyed by Erdogan (this also includes the "other 50%" invoked by Can Dundar), should not go unchallenged.

This is not about defending Erdogan, the AKP, Islamism or its supporters or denying their responsibility for the catastrophic conditions in Turkey. It is much more a case of having to draw a more complex picture, in which broader connections and fundamental problems become visible. This is vital for a democratic and enlightening perspective on the developments in Turkey.

Tayfun Guttstadt studied music and Islamic studies in Hamburg and after several years in Turkey, now lives as a freelance journalist and musician in Berlin. He is currently studying for a Masters in religion and culture at the Humboldt University in Berlin. His books "Capulcu" and "Gestrandet" are published by Unrast.

All eyes in Turkey are on a court hearing scheduled for January 30 into a child abuse case that allegedly occurred with the knowledge of one of Istanbul's most powerful Islamic ... END_OF_DOCUMENT_TOKEN_TO_BE_REPLACED

Any reconciliation between Turkey and Syria’s Assad regime would have disastrous consequences for many Syrians, explains Syria expert Kristin Helberg END_OF_DOCUMENT_TOKEN_TO_BE_REPLACED

The poetry of Pir Sultan once prompted uprisings in the Ottoman Empire. To this day, Alevis identify with him. Rainer Hermann visited Mehmet Celebi, a direct descendant of the ... END_OF_DOCUMENT_TOKEN_TO_BE_REPLACED

There are signs of an imminent normalisation of relations between Turkey and Syria. This would allow Erdogan to score political points domestically before the upcoming elections ... END_OF_DOCUMENT_TOKEN_TO_BE_REPLACED

Turkey will mark the centenary of the proclamation of the Turkish republic in October. But 2023 will be an important year in another respect too: Turks will go to the polls in ... END_OF_DOCUMENT_TOKEN_TO_BE_REPLACED

END_OF_DOCUMENT_TOKEN_TO_BE_REPLACED
Social media
and networks
Subscribe to our
newsletter