An Al Jazeera staff member at the children's channel KI.KA or a German photographer at a Lebanese art association. Both are possible thanks to the project CrossCulture Internships, which has been run by the Institute for Foreign Cultural Relations since 2004. Mona Naggar introduces the project

An Al Jazeera staff member at the children's channel KI.KA or a German photographer at a Lebanese art association. Both are possible thanks to the project CrossCulture Internships, which has been run by the Institute for Foreign Cultural Relations since 2004 and is funded by the German Foreign Office. Mona Naggar introduces the project and several of the interns 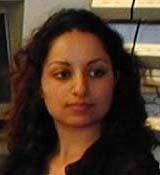 In Syria Dima Hwijeh is participating in a campaign to clean up the Barada River. During her internship in Germany she is compiling information on environmental protection for the public

​​Dima Hwijeh is 24 years old. The young Syrian is currently taking part in an internship lasting several weeks at the environmental organization PLENUM in Reutlingen.

Actually, Dima is studying English language and literature in Damascus, but she has been involved with environmental protection in her city since her school days and works for the Syrian Environmental Association.

She is participating in a campaign to clean up the Barada River, which flows through Damascus, and she visits elementary schools and tries to increase the children's awareness of the environment.

During her internship in Reutlingen she is compiling information on environmental protection for the public. She is working on a study of nature reserves in the Swabian Highlands and visiting farms with colleagues in order to inquire about possibilities for cooperation.

Dima Hwijeh says that Syria has a lot to catch up on in these areas. "Several animal species in our country are in danger of becoming extinct and no one is worried about it. And in my association we have never thought of contacting farmers directly and working with them."

Dima Hwijeh is one of the participants in this year's CrossCulture Internships of the Institute for Foreign Cultural Relations in Stuttgart. The program offers young people from Muslim countries the opportunity to come to Germany.

They spend several weeks with institutions in the fields of media, environmental protection, human rights, art and culture, or education. For example, a legal adviser at the Institute of Family Counseling in Tehran is currently taking part in an internship at the Max Planck Institute for Foreign and International Law in Freiburg.

And in the autumn a young staff member from Al Jazeera's children's channel will take a look at the German children's channel KI.KA. There are many applicants from the media sector, says Manuela Höglmeier of the Institute for Foreign Cultural Relations. She would like to place interns from the publishing industry.

The internship is also intended to promote networking opportunities between institutions and individuals in Germany and the Muslim countries.

Katharina Kilian-Yasin of the Institute for Foreign Cultural Relations can cite successful examples, for instance, "when we suddenly encounter the name of a former intern in the conference program of another organization, we see, 'Ah, he is in this network now,' although we do not follow it any further. Networks definitely form among the interns."

​​Young people from Germany can also gain professional experience through a CrossCulture Internship in Muslim-influenced countries, however. In mid-July the Spanish native Daniel Izquierdo returned from Beirut. He managed to leave the city two days after the Israeli attacks began. Daniel left the country via Damascus in a bus convoy that was organized by the Spanish embassy.

The 30-year-old employee of a photo marketing agency in Berlin, who also has work experience in Belgrade, was introduced to the Lebanese art market at the art association Ashkal Alwan in Beirut. He worked on preparations for a conference and a symposium on video art and had long discussions with local artists.

One controversial topic was the terms "Arab" and "Islamic," which we use so carelessly. The identity of many Lebanese cannot be defined by these general national and religious labels, however.

Despite the painful end to his stay, Daniel was completely satisfied with his internship. "I have never felt so at home as I did in Lebanon and Serbia. That must be due to the cultural mix. Serbia used to be Ottoman, and parts of Spain were under Arab/Islamic influence during the Middle Ages. And Lebanon is also a colorful historical and religious mixture.

I have never made friends as quickly as I did during my stay in Beirut." He already has preliminary plans for a collaboration with Ashkal Alwan. How the contact develops further depends, above all, on the situation in Lebanon.

Since the project began two years ago, the Institute for Foreign Cultural Relations has been able to enlist the support of a significant number of institutions in Germany and Muslim countries which are willing to send or host interns.

END_OF_DOCUMENT_TOKEN_TO_BE_REPLACED
Social media
and networks
Subscribe to our
newsletter