The Obstinacy of Hatred

A row over the conductor Daniel Barenboim shows how irrationally some Arabs behave towards Israel, says Tomas Avenarius in his commentary 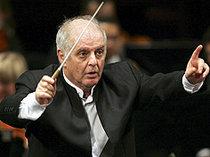 "Music brings people together and knows no antagonism. I come from Israel, but I am also a Palestinian," said the world-famous conductor after his historic performance in Cairo

​​ No one could claim that internationally renowned conductors are falling over their batons to perform at Cairo's Opera House. Egypt is not a country with a flourishing Western classical music scene. But Daniel Barenboim made a rare appearance on the podium in mid-April. The Argentinian-born Jew is one of the most famous conductors and pianists in the world – a boon for any concert house.

In advance of the concert, however, Egyptians buried their noses in the history books instead of the orchestral score. Newspapers dismissed the idea as "an attempt at a disguised normalization of Egyptian-Israeli relations." The maestro was apparently not welcome.

Criticism aimed at the wrong person

The concert went ahead nevertheless, and the conductor was given a rapturous reception at the Opera House in Cairo. The Egyptian minister of culture made it clear that in this case, the knee-jerk criticism of Israel had been aimed at the wrong man. Barenboim is himself critical of Israeli policy towards the Palestinians. 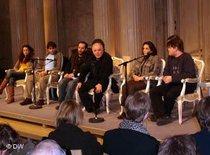 Successful co-existence, but one full of tension: Barenboim at a press conference with the Israeli-Palestinian West-Eastern Divan Orchestra

​​ Barenboim has in the past appealed directly to Israel's parliament to grant Palestinians their due rights – a statement that prompted one Israeli minister to call for the musician to be stripped of his Israeli citizenship.

As for the Palestinians, they quickly recognised the value of this aesthetic champion of their cause, and awarded him honorary Palestinian citizenship.

Omar Sharif: "Barenboim is a friend of the Arabs"

This latest tumult in Cairo was simply absurd. "Barenboim is a friend of the Arabs," said Egyptian film star Omar Sharif. "This is idiotic." But at the same time, the fuss over the appearance of the Israeli musician is symptomatic of the political divisions within Egyptian society. To this day, many Egyptians, including members of the government and establishment, still want to be more Palestinian than the Palestinians themselves. They know only too well that their country made peace with its Israeli neighbours in 1979. But even 30 years later, they think they can still ignore the fact. 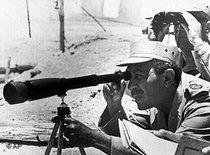 Anwar Sadat as a soldier in the Sinai in 1973: six years later, as Egyptian president, Sadat concluded a peace treaty with Israel, which many of his compatriots refuse to accept to this day

​​ They reject a normalization of relations that should be self-evident between neighbouring countries – no Israeli books at the book fair, no Israeli films, incessant criticism of or flat refusal to acknowledge the existence of Egyptian-Israeli economic and trade links, and something akin to a ban on dialogue among non-politicians.

And all the while, Egyptian President Hosni Mubarak is working together with the Israeli government, the countries' intelligence agencies regularly compare notes, and tourists from Tel Aviv and Haifa travel across the border for a spot of Sinai sunshine. In short, on some levels, a state of normality was reached some time ago.

A lack of discerning criticism

Something that is lacking in Egypt and among many Arabs is the understanding that the normalization of ties with Israel does not have to mean not criticising Israeli policy. The fate of the Palestinians remains, from an Arab point of view at least, a historic injustice.

But no amount of verbal posturing is going to put the matter to rights. The reality is that the state of Israel exists and is globally recognised, that it will at best clear occupied Palestinian territories if forced to do so, and that nothing more can be achieved by military force. This is illustrated by the wars lost by the Arabs.

If Palestinians are to be granted their rights, then reconciliation and dialogue between Palestinians and Israelis are both a prerequisite and the only way forward. And no one is better suited to opening up the channels of communication than non-politicians such as artists, writers, human rights activists and tourists.

Among them are many Israelis whose criticism hits home much harder than the hackneyed Arab political slogans from the 1960s and 70s. One of these critics is Barenboim, who says: "The destinies of Palestinians and Israelis are so inextricably linked, that we are blessed – or cursed – to live with each other."

Tomas Avenarius lives in Cairo and has been the Near East correspondent of the Süddeutsche Zeitung for many years.

The West-Eastern Divan Orchestra
Consoling Concertos
Daniel Barenboim is on tour with his Israeli-Arab orchestra in times of war. He regards it as an "independent republic" – and he has a message to pass on that is otherwise all but drowned out by the noise of the battlefield. By Sonja Zekri

"The Band's Visit"
An Israeli-Egyptian Utopia
In the Israeli film "The Band's Visit", an Egyptian police orchestra plays the starring role. Despite this, the film has not been shown in Egypt and Abu Dhabi. Kristina Bergmann has seen the comedy about the common ground shared by very different people

END_OF_DOCUMENT_TOKEN_TO_BE_REPLACED
Social media
and networks
Subscribe to our
newsletter