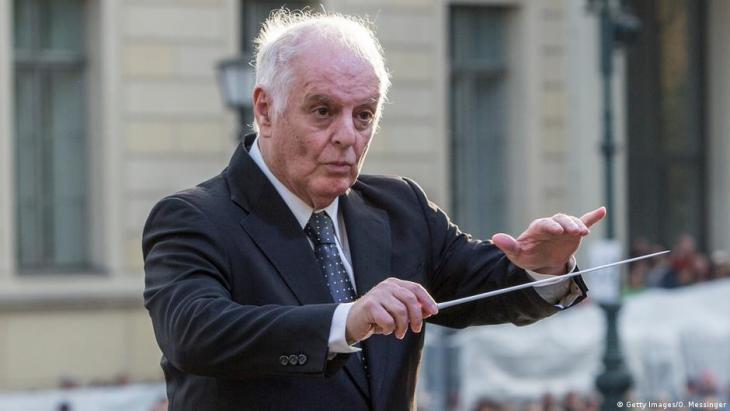 Daniel Barenboim is not only a world-famous pianist and conductor. He has also worked tirelessly to foster understanding and reconciliation between Palestinians and Israelis. By Lukas Philippi and Katharina Rogner

One of the world's best-known conductors, Daniel Barenboim is driven by the idea that music can change people for the better. He is passionate about music, but for him, music alone is not enough.

Barenboim's central conviction is that music must become "an essential part of social interaction". His own musical commitment has always been inextricably linked to his socio-political involvement.

On 15 November, the Argentine-born and world-renowned musician turned 80.

Barenboim has been general music director of the Staatsoper Unter den Linden and chief conductor in perpetuity of the Staatskapelle Berlin since 1992. Until recently, the busy star was a regular guest in the world's famous concert halls. But at the beginning of October, he announced that he would not be able to perform for the time being due to a serious illness. In particular, he would withdraw from conducting, the Berlin State Opera announced.

On Twitter, Barenboim had previously reported a "serious neurological illness" and that he first had to "concentrate on his physical well-being". The birthday concert planned for 15 November in Berlin, at which he was to perform as pianist, was also cancelled for health reasons. 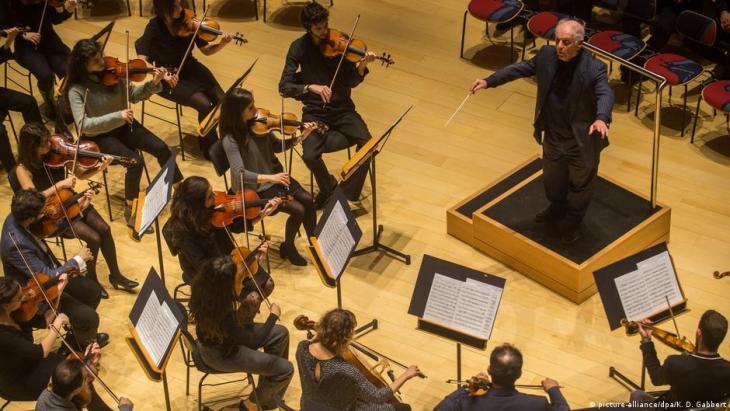 Music against hatred: the West-Eastern Divan Orchestra is a project close to Barenboim's heart. He founded it in 1999 with his friend, the Palestinian literary scholar Edward Said (1935-2003). It is a peace project for young musicians from the Middle East – from Israel, the Palestinian Territories and other Arab countries. The maestro once stated that after two hours of rehearsal, he had "reduced the level of hatred to zero"

Barenboim is inspired by the idea that music can change people for the better. One of his most cherished projects is the West-Eastern Divan Orchestra. He founded it in 1999 with his friend, the Palestinian literary scholar Edward Said (1935-2003).

It is a peace project for young musicians from the Middle East – from Israel, the Palestinian Autonomous Territories and other Arab countries. After two hours of rehearsal, he had "reduced the level of hatred to zero", the maestro once stated.

He is also committed to founding "music kindergartens" to introduce even the youngest children to sounds, rhythm and instruments. His credo is: "Not music education, but education through music".

The Barenboim-Said Academy for young musicians from the Middle East, which began its work in Berlin at the end of 2016, is also intended to serve education and peace. The students at the private music academy are also taught philosophy, history and literature.

Making music and learning together is intended to contribute to understanding, a willingness to compromise and reconciliation. Can the academy really contribute to a peaceful solution in the Middle East conflict? "Certainly not in the short term, but in the long term there is a good chance," Barenboim said at the opening.

He is also famous for addressing the audience prior to giving a performance. In 2017, for example, as Brexit was in full swing, he warned against isolationism and nationalism in Europe during a concert at The BBC Proms in London. A few weeks previously, an article he wrote had criticised the Israeli occupation of Palestinian territories following the 1967 Six-Day War as "immoral".

The son of Russian-Jewish immigrants, Barenboim was born in Buenos Aires in 1942 and grew up in Israel from 1952 onwards. When he was five years old, his mother began giving him piano lessons. Later he studied with his father, who remained his only piano teacher.

The gifted pianist gave his first public concert at the age of seven in his native city of Buenos Aires. As a small child, he is said to have played with another Argentinian piano prodigy, Martha Argerich, under the grand piano at home. They would later share a stage together.

Barenboim was ten years old when he made his international debut as a pianist in Vienna and Rome. At the age of eleven, he also took conducting lessons, studying harmony and composition with Nadia Boulanger in Paris. He first appeared on stage as a conductor in London in 1967, and six years later he made his debut as an opera conductor in Edinburgh, Scotland, with Mozart's "Don Giovanni". Later he held positions as chief conductor in Paris and Chicago.

In addition to the classical concert and opera repertoire, Barenboim has increasingly devoted himself to contemporary music with the Berlin Staatskapelle, performing compositions by Pierre Boulez, Wolfgang Rihm and Elliott Carter. But he has also repeatedly paid tribute to the tango of his native country.

Barenboim is married to the Russian pianist Yelena Bashkirova. His first wife, the British cellist Jacqueline du Pre, died in 1987, and his two sons are also musicians.

"Music is not a profession, it is an attitude to life," Barenboim wrote in an article in the German weekly newspaper Die Zeit at the end of October. It is how he has spent his entire life.    (epd)

Recent efforts to rehabilitate Assad are setting a damaging precedent for accountability, just as the international community is expressing the need to hold Russia to account for ... END_OF_DOCUMENT_TOKEN_TO_BE_REPLACED

Nouara may be 65, but she is ready to join thousands of others who burn their ID and pay traffickers for the chance of a new life in Europe. Zineb Bettayeb reports END_OF_DOCUMENT_TOKEN_TO_BE_REPLACED

Education for girls and women is still possible in Afghanistan, says Reinhard Eroes of the Kinderhilfe Afghanistan initiative. In interview with Elisa Rheinheimer, he talks about ... END_OF_DOCUMENT_TOKEN_TO_BE_REPLACED

Locals in the Middle East have said European critics are showing bias and hypocrisy when they condemn Qatar. Observers agree that Qatar has had to deal with more criticism than ... END_OF_DOCUMENT_TOKEN_TO_BE_REPLACED

In Doha, Arabs from Morocco, Tunisia, Egypt and Algeria are gathering to celebrate the first ever FIFA World Cup to be held on Arab soil. The criticism from Europe? Over the top, ... END_OF_DOCUMENT_TOKEN_TO_BE_REPLACED
Author:
Lukas Philippi und Katharina Rögner
Date:
Mail:
Send via mail

END_OF_DOCUMENT_TOKEN_TO_BE_REPLACED
Social media
and networks
Subscribe to our
newsletter