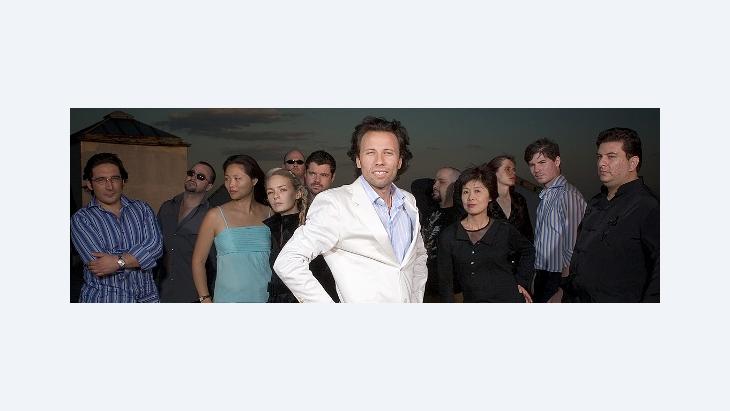 Marriage of East-West Music on the Hudson

﻿Celebrating musical reconciliation at a place scarred by incredible pain requires a delicate touch and a musical tour de force if the result is to be convincing. New York's Absolute Ensemble and the Lebanese artist Marcel Khalifé took up this challenge. Stefan Franzen sends us this review of the resulting CD, Arabian Nights

Although this intercultural work was first performed in Bremen, Germany, in 2003, the live version released on CD by the German record label enja was recoded in 2007. Given that the idea behind the project was born out of the aftershock of the September 11 attacks, the location for the recording is highly significant: New York City Town Hall. 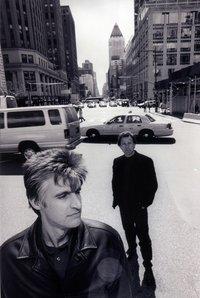 "Understanding between the cultures as an aesthetically enriching experience": Daniel Schnyder and Kristjan Järvi in NYC

​​The objective of "Arabian Nights" was to bring Arab and Western music together in a coherent suite despite the enormous differences in musical parameters: quarter tones and scales on the one hand, western tonality on the other. The intention was to make understanding between the cultures not only an audibly, but also an aesthetically enriching experience.

The men behind the concert were predestined for a project like this. The saxophonist and composer Daniel Schnyder, a Swiss-American who was raised in Damascus, has plenty of cosmopolitan experience and is considered to be one of the open-minded creative talents in the modern jazz scene. He globalised the legend of William Tell in a quintet, turned Shakespeare's play, The Tempest, into an opera, and writes for both jazz ensembles and classical orchestras.

Schnyder worked out the concept for the suite together with the Absolute Ensemble. This chamber orchestra, which has twelve musicians and is conducted by Kristjan Järvi, has been walking the fine line that separates jazz, classical music, and world music on the Hudson for 18 years now.

On the Arab music side of things, two virtuosos were involved in the project: like Schnyder, the Beirut oud player Marcel Khalifé has been crossing borders real and musical for years and can justifiably be considered the Lebanese counterpart to the Swiss-American.

Khalifé, a UNESCO Artist for Peace, is one of the "most complete" musicians in the Arab world at present: he has liberated oud music from its rigid corset and has in past recordings put the instrument into a broad and ever-changing context that is somewhere between symphonic tradition and bebop. Khalifé also composes for dance and film and has breathed new life into Arab song by putting the poems of Mahmoud Darwish to music. 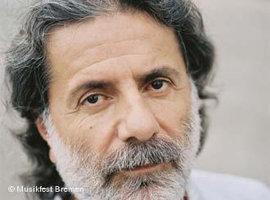 Crossing borders real and musical: Marcel Khalifé, according to Stefan Franzen "one of the 'most complete' musicians in the Arab world at present"

​​Khalifé's compatriot Bassam Saba is considered a leading virtuoso on the ney flute, whose music he has taken far beyond the current Sufi trend and into collaborations with Yo Yo Ma and Herbie Hancock.

The cover enja chose for the "Arabian Nights" CD is a picture of a vibrant blue night sky over a desert. While at first sight, this image creates a false, cliché-ridden impression, the music itself soon dispels any misconceptions.

The CD opens with a spirited, almost hymn-like piece: "Ya Bahriyyeh" is based on a composition by Khalifé's first ensemble, Al Mayadine, which was founded in the 1970s. It includes verses from the US-Palestinian Fady Joudah, who uses strong images of fishermen pulling together on the same rope to create metaphors for freedom. "La Prière De L'Absent" builds up over a trotting ostinato and develops a hypnotic pull that is similar to Ravel's Bolero thanks to the dulcet tones of Bassam Saba's ney.

At the peak of its power

In the central piece of the suite, "Amr I Bismiki", the Absolute Ensemble shows itself at the peak of its powers. Following a vocal solo by Khalifé, whose soft, almost tender voice is astonishing and encourages the audience to sing along, it is above all the wind section that not only comes up with amazingly compact interjections but also creates precisely conversing groups. The three relatively short compositions by Schnyder that follow are all related. 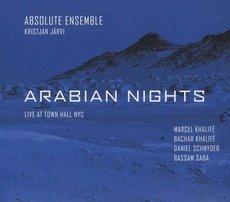 "Oyun" parts I and II, which complete the dramatic core of the suite, are of a similarly fiery nature, while the finely woven "Bayat" brings things to a lyrical conclusion.

Here, ney and violins intertwine. Starting with these two instruments, the idiom of the classical Viennese school and the Arab orchestral tradition merge into one in the arrangement. In this final piece in particular, the cello, bassoon and trumpet successfully lend a magnificent transparency to a rich, well thought-out texture.

A merging of styles

Although "Arabian Nights" does not succeed in squaring the circle – after all, by eliminating quarter tones, all musical incompatibilities were done away with from the start – with its variety of voices from intimate solo passages to big band effects, it certainly does succeed in convincingly building a bridge between Arab and Western music vocabulary. In short, this project is not just another example of musicians adding one musical tradition to another, as has often been the case in so many earlier "East meets West" projects.

Newly discovered aerial photographs taken by the German Luftwaffe show what a keen interest the Germans took in British-controlled Palestine during the Second World War. Not only ... END_OF_DOCUMENT_TOKEN_TO_BE_REPLACED

Lebanon is suffering from the worst economic crisis in its history, which has led to a dramatic shortage of supplies. Electricity and petrol are hard to come by. ... END_OF_DOCUMENT_TOKEN_TO_BE_REPLACED

Lebanese cartoonist Bernard Hage has made a name for himself in a very short space of time, both at home and abroad. Now he sees no future for himself in Lebanon, and is about to ... END_OF_DOCUMENT_TOKEN_TO_BE_REPLACED

A new survey by Arab Barometer adds numbers to the narrative that COVID has led to a harsher reality for women in the Middle East and North Africa. By Jennifer Holleis and Razan ... END_OF_DOCUMENT_TOKEN_TO_BE_REPLACED

The young activists from the Minteshreen movement want to provide an alternative to the political corruption of the elites. For them, the state is more important than religion. By ... END_OF_DOCUMENT_TOKEN_TO_BE_REPLACED

They’ve already got the Louvre; they’ll soon have a Guggenheim Museum as well – and now the Emirates have added literature to their quest for cultural supremacy in the Arab world ... END_OF_DOCUMENT_TOKEN_TO_BE_REPLACED
Author:
Stefan Franzen
Date:
Mail:
Send via mail

END_OF_DOCUMENT_TOKEN_TO_BE_REPLACED
Social media
and networks
Subscribe to our
newsletter