On his hill south-west of Bethlehem, Palestinian Christian Daoud Nassar offers Muslims and Jews a place where they can come together in peace. But settlers' expansion plans mean it is a place whose existence is under constant threat. Peter Münch paid it a visit 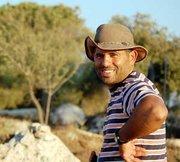 Plenty of obstacles to overcome: Daoud Nassar, a Palestinian Christian among Muslims and Jews

​​On a day intended for a celebration of the sun it is cold and wet in "Daher's Vineyard". Heavy raindrops bounce off the solar panels that adorn the roof of the hut where Daoud Nassar is welcoming his guests. They have come all the way from Germany to inaugurate his new solar heating system; but on a day when solar power should finally have brought electricity to the Nasser family, here on their hill southwest of Bethlehem, the rain has come instead.

The guests may be looking a shade morose under the grey skies but Daoud Nasser is positively beaming. "This is a blessing," he says, "now we can get our water tanks filled. We don't have a tap water supply here either."

A "Tent of Nations"

Daoud Nasser is nothing if not positive. He is someone who is prepared to make the best out of even the most difficult situations. And there is no shortage of opportunities to practice that skill, up here on his hill in the West Bank, and as a Christian among Muslims and Jews.

The property, bought by his grandfather Daher Nassar in 1916, is now surrounded on all sides by Israeli settlements. Up here on his 950-metre-high hill Nasser continues to hold the fort – but rather than repelling invaders he has built a place where people can come together, his "Tent of Nations".

​​It is a place where Israelis and Palestinians can meet, with each other, as well with others from all over the world, and then there are the Jewish groups from America. They come to plant trees, perform plays, talk about freedom and build bridges. On a rock near the entrance Daoud Nassar has written a message in many languages: "We refuse to be enemies."

It is not a sentiment shared by everyone in the region, and Daoud Nasser has had plenty of obstacles to overcome – one quite literally, when a huge boulder suddenly appeared in the middle of the access road to his property. Since then the old vineyard has been accessible only on foot. The intention is clearly to drive him away.

"This would be an ideal site for a new settlement," he says, and it is this is very likely that led to his land suddenly being declared state territory by the Israelis in 1991. He has been fighting the threatened expropriation in the courts ever since.

"I have documents from the Ottoman period; from the British, the Jordanians and the Israelis too, all of them affirming our ownership of this land," he says. They do not give him any peace of mind or sense of security however. When he recently responded to a demand that he clear out from a settler with an American accent by telling him about the documents, the reply was: "Our documents are from God."

It is a no-holds-barred struggle for the land that is being waged here and Daoud Nasser still has no water or electricity supply to his land despite the fact that there are connections to all the surrounding settlements. He is not allowed to build anything, not even to erect a tent, and if he does, he immediately receives an order to demolish or take it down.

Political support for the project

​​Demolition is a constant threat. In order to ensure the safety of his solar energy system, a German delegation has turned up for the opening. Rupert Neudeck, whose Green Helmet humanitarian organisation installed the 60,000 euro system, praises "the sun for Palestine." It took him more than two years to get the necessary batteries and solar panels through the intricacies of Israeli bureaucracy and the West Bank barrier.

"One can't just drop it all in from the air," he says. Neudeck has also brought along Ruprecht Polenz, member of the German Christian Democratic Party and chairman of the Foreign Affairs Committee in the Bundestag, who promises political support to allow the project "to endure."

Daoud Nasser now has German protection, as it were, and there are it seems major plans afoot – there is talk of setting up workshops here for young Palestinians and of a network of solar energy systems throughout the West Bank. There will be obstacles to be overcome at every step, however, as Nassar knows only too well from experience.

But he knows also that there is light at the end of every tunnel. And that even in the midst of the conflict between Israeli settlers and Palestinian residents moments come along that show just how easy it would actually be to live peacefully alongside one another. 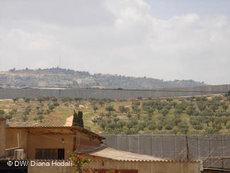 During the Israeli–Palestinian conflict a great number of Palestinian olive groves have been destroyed. In Daoud Nassar's case, a Jewish organisation donated and planted new trees

​​Take, for example, the story of the bulldozing of the olive grove. In one particularly nasty incident, a group of settlers with bulldozers destroyed 250 olive trees on his land. Three weeks later he received a fax from a Jewish organisation telling him they would donate new trees. "They brought the trees along themselves and planted them," he explains.

Or there was the time he received a phone call after the army had suddenly arrived to carry out a search of his property one night. "I got a call the next day from one of the settlers, he wanted to apologise to me for the army's actions." And then there was the Jewish neighbour who appeared one day rather by chance and saw for herself the conditions they were living under. She and her husband came by at Rosh Hashanah, the Jewish New Year, to wish Daoud and his family all the best.

"These things don't amount to peace," he says, "but they are the building blocks for peace. When people get to know one another, their eyes are opened."

These may be no more than glints of light on otherwise rather dark days, but it is the glints he wants to concentrate on. Once the clouds have gone and the sun begins to shine again it will mean a supply of electricity to the huts and tents where people can gather. "There is good news from Palestine too," Daoud Nasser reminds me.

Dossier
Places of Dialogue
To provide a successful framework for dialogue, you need specific places where people can discuss and argue with one another, meet and exchange ideas. Qantara.de introduces some of these place

Interview with Matt Beynon Rees
"Hamas and Fatah Have an Interest in the Conflict Continuing"
Matt Beynon Rees is a British-born crime novelist who has won numerous awards for his series of novels about a fictional Palestinian sleuth called Omar Yussef. He initially came to the Middle East as a young journalist, but in time turned his attention to fiction. Eren Güvercin spoke to him about his work and the situation in Palestine

END_OF_DOCUMENT_TOKEN_TO_BE_REPLACED
Social media
and networks
Subscribe to our
newsletter