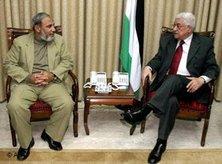 The Hamas will have to walk a tightrope. Hamas leader Mahmoud Al-Zahar (left) and President Mahmoud Abbas discuss the forming of a government

​​It was an election victory which struck like a bolt of lighting: seventy-four Hamas deputies were elected among the 132 members of the new Palestinian Legislative Council, compared with only 45 representatives of Fatah. That meant an absolute majority for a political movement which up until last year, when they participated in the local election for the first time, had flatly refused to have any part in the electoral process.

What were the factors which led Palestinian voters to such an unambiguous result? And how can Hamas's change of course be explained – moving from a categorical refusal to take part in elections to full political participation?

Peace process in name only

The decision of the voters seems in the first place to have been a decision against everything for which they felt Fatah and the Palestinian Authority stood. At home they had seen nepotism, corruption, inefficiency and a growing gulf between rich and poor. And the Authority's foreign policy had brought them a peace process in name only.

What does Hamas stand for in contrast to Fatah, and what do its voters expect of it?

Most of the voters want an efficient and corruption-free Palestinian administration in the quasi-governmental bureaucracy, in the health service, in the education sector and in the economy. They know that the Israeli settlers and the army are outside their sphere of influence, but they want to see calm and order on the Palestinian streets again. They want the many armed bands of Fatah activists put under a firm controlling hand.

There have a been a range of contradictory statements from newly elected Hamas deputies as to how the party will deal with the issue of Sharia law and whether it should be imposed on Palestinian society. As a result, many Palestinians are calling for restraint from Hamas on this issue, as well as a clearly stated and firmly practiced policy of tolerance towards those with dissident views and towards religious minorities. At the moment it seems as if Hamas is ready to adopt a policy of tolerance.

The issue of a Palestinian state

On the foreign policy front, the Palestinians expect Hamas to make its position against the Israeli occupation clearer than Fatah did, and to criticise the occupation in the international arena more firmly than the "Palestinian Authority" or the PLO were accustomed to do.

Above all however, they want their government to take action at all levels to achieve concrete measures leading towards the creation of a Palestinian state. That does not by any means imply that they reject a peace process. Rather, they are sending the message that the peace process ceased to exist years ago, and that the reason for that state of affairs is not to be found on the Palestinian side but on that of the Israelis who have been occupying Palestinian territory since 1967.

Over that period, under the settlements policy, the Israelis have taken large parts of Palestinian territory and have failed to keep the agreements they have entered into.

Will Hamas be able to fulfil these expectations? What does Hamas stand for today?

Hamas and the Oslo Agreement

The Hamas Charter of 1988, adopted in the first year of the Palestinian uprising against the occupation, speaks of the liberation of the whole of Palestine, and the setting up of an Islamic state in historic Palestine – in other words not just in the areas occupied in 1967, but also in the area which is now the state of Israel.

Hamas was prepared to fight for this aim with all methods, political as well as military. The enemy was the state of Israel, although in various passages in the charter the enemy was seen as Zionism and Jews in general. In some places the Koran was quoted to back up the arguments, in other places language and invective was simple-mindedly taken over from European anti-Semitism.

At the same time, elsewhere in the document, there are clear commitments to respectful coexistence with other religious groups. Hamas has uncompromisingly rejected the Oslo process from the start; the Hamas leadership says Oslo sold out on central Palestinian national demands and made wide-ranging compromises with Israel without getting anything in return.

It says that even the policy of establishing a Palestinian state in the territories occupied in 1967, agreed unanimously by the PLO in 1988, was quietly abandoned.

Hamas's campaign against the Oslo agreement and against the Israeli occupation, which continued despite the agreement, was not only conducted using political means. Following the massacre in the Haram al-Ibrahimi in Hebron, when an Israeli settler killed 29 Palestinians at prayer, the campaign was mainly conducted with the brutal means of suicide bombings – not in the occupied territories, but within Israel, and against Israeli civilians. The campaign was conducted in two phases.

The first began in 1994, directly after the Hebron massacre, and continued until autumn 1997, when Sheikh Ahmed Yassin was released from an Israeli prison and ordered a halt to the suicide bombings.

The second began in March 2001. This was six months after the start of the Second Intifada, in which many Palestinian civilians died as a result of the Israeli military policy of brutal suppression, which included the use of live ammunition against civilians. This campaign continued until May 2003, when Hamas agreed to join a ceasefire offered by the Palestinians.

Within Hamas there seem to have been fierce arguments over the policy of suicide bombing. In the end it was the group which had rejected the policy as illegitimate from the start which won out. They did not wish to countenance any further violation of international norms.

Since the beginning of 2005, Hamas has held to an agreement with the "Palestinian Authority" under Mahmoud Abbas to keep the peace. It was this agreement which made it possible to hold the presidential election in January 2005, several rounds of local elections between December 2004 and December 2005 and finally the parliamentary elections in January this year.

Following Hamas's landslide victory, Israel, the USA and the European Union have all made their position clear: there will be no negotiations with Hamas – with terrorists, as they are usually described as in the West – until Hamas rejects violence, recognises the right of Israel to exist, and accepts the agreements which have so far been reached in the course of the Oslo process.

Hamas's dilemma, caught between this massive international pressure and its domestic commitments, seems almost insoluble. It has a responsibility towards its electors, especially now, just after the election. It has a hard core of fanatical supporters who will never be reconciled with Israel – at least not until the end of the occupation of the West Bank.

And it has many first-time and protest voters, who have supported Hamas because they expect a clear line towards Israel. These voters hope that a clearer line will lead to success: to the end of the occupation, to peace and to the establishment of a Palestinian state.

For this reason, since the election, Hamas has been trying to adjust its foreign policy position.

Khalid Meshal, head of Hamas's politburo, who commutes between Qatar and Damascus, has made a clear statement in favour of a "new realism," under which Hamas would accept all the international agreements which have been entered into by the Palestinian Authority, from Oslo to the Roadmap.

The lead candidate on the Hamas list, Ismail Haniyeh from Gaza, had called on the international community to continue its support for Palestine. In return he has promised to establish an efficient administration and to apply funds transparently to specific projects. At the same time he's called on individual Palestinian and Arab investors to invest in Palestine much more intensively than they have done in the past. To attract them, Hamas is promising to ensure greater cooperation between the public and private sector in the economy.

But so far there has been no clear rejection of violence and no explicit recognition of Israel. Hamas has clearly spoken out in favour of the establishment of a Palestinian state within the land occupied in 1967, and that implies recognition of Israel. And Hamas has also spoken out clearly in favour of a political process leading to the solution of the conflict with Israel, but it has added that it maintains the right of resistance against the continuing Israeli occupation.

Rather than issue an unmistakable statement of recognition or a rejection of all forms of violence (including the right of resistance, which international law allows any society under occupation), Hamas prefers to operate with the religiously defined term "hudna" or ceasefire. Several Hamas leaders have declared their willingness to reach a long-term ceasefire agreement with Israel.

Responding to the demands issued by the Quartet (the US, the UN, the EU and Russia) at their recent meeting in London, a Hamas spokesman from Gaza said the Palestinians had hoped for some words of criticism of the Israeli occupation and Israeli violence, if not for a clear call on Israel to end its occupation of Palestinian territory as required by numerous resolutions of the UN Security Council since 1967.

The massive pressure on Hamas from outside seems rather to be having negative consequences and is leading to a hardening of the fronts.

It is still not clear how, or even if Hamas will succeed in extricating itself from its foreign policy dilemma. The signs of the last few days seem to point towards a compromise. Part of this compromise will see a Palestinian government including many independents and technocrats. Another element may be the attempt on the international level to move away from making public declarations – and thus running the risk of creating new lines of confrontation – towards a policy of making policy behind closed doors.

Hamas hopes that it will be given the time it needs to carry its supporters with it as it moves from being a radical resistance movement to being a political party which can lead Palestine to independence. This will require a great deal of sensitivity, especially on the side of the EU and the USA. But above all it will require courage on the part of the Hamas leadership, and the willingness to make historic decisions. Whether they are willing and able to do so has yet to be proved.

Helga Baumgarten is professor for political science at the Birzeit University, Palestine. So far, she has tought at the Free University of Berlin and at the American University of Beirut. She is the author of various books, the most recent of which is a political biography of Yasser Arafat.

Gaza Disengagement
Javier Solana: EU Prepared to Step up Engagement
The EU is ready to make the Gaza disengagement work, says Javier Solana, EU High Representative for the Common Foreign & Security Policy – with the hope and commitment that soon after, the road to a two-state settlement can be resumed