Algeria's recent referendum was a thinly veiled attempt to hijack the agenda of the country's popular Hirak protest movement. Yet the people are no longer willing to accept ageing leaders who rely on a veneer of democracy to maintain their rule. Legitimacy will only be achieved by genuine structural reforms. By Dalia Ghanem

On 1 November, Algerians voted in a referendum for a series of constitutional amendments proposed by the government. The referendum was a non-event because of the low participation level. This came at a time when the population had been demanding a political transition in Algeria, through a popular protest movement, the Hirak, that began in February 2019.

The 73 amendments covered a wide range of issues, including the separation of powers, fundamental rights and public freedoms, the establishment of an independent national electoral authority, the independence of the judiciary, the fight against corruption, as well as the abolition of the Constitutional Council and its replacement by a constitutional court.

There were two principal reasons for the failure of the referendum. The constitutional amendments had been adopted almost two months earlier, on 11 September, by the government and ratified by the upper and lower houses of parliament. And this was the second time that the regime had asked citizens to voice their opinion – the first time being last December, when Algerians were asked to elect a new president – amid widespread distrust of its intentions.

The participation rate in the referendum was a very low 23.7 percent, but the regime’s stated aim was to use it as a step in building a "new Algeria", which meant that it regarded the referendum as a way out of the impasse with the Hirak. 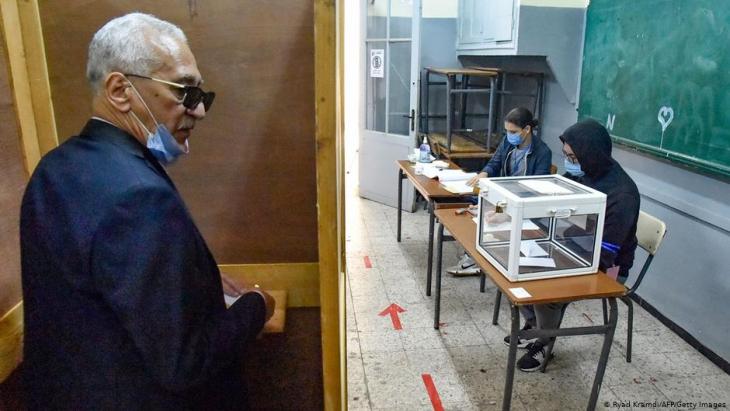 Waiting on political transition: on 1 November, a mere 23.7 percent of Algerians voted in a referendum for a series of constitutional amendments proposed by the government. The 73 amendments covered a wide range of issues, including the separation of powers, fundamental rights and public freedoms, the establishment of an independent national electoral authority, the independence of the judiciary, the fight against corruption, as well as the abolition of the Constitutional Council and its replacement by a constitutional court. Yet Tebboune is woefully missing the point. What the people want is radical and fundamental change

For the regime, the referendum and new constitution are designed to break the momentum of the popular movement by trying to appropriate its objectives. For instance, the preamble mentions that the constitution is a response to "the will of the people" expressed through its "authentic blessed Hirak", which "put an end to [past] errors …" In other words, the vote is the regime’s solution to move on, so that a new Algeria can emerge and the Hirak can be ended.

This effort by the regime to regain popular legitimacy did not persuade the population. In fact, it aggravated an already profound legitimacy crisis. Why? First, because many Algerians disputed the election of Abdelmadjid Tebboune as president, which took place amid a mass boycott and clashes with the police. The abstention rate was officially 58 percent and ruined the authorities’ first attempt to portray themselves as purveyors of democracy.

The referendum for a new constitution also aggravated the legitimacy crisis because it followed an all-too-familiar pattern for Algerians. Throughout Algeria’s recent history, the regime has used referendums and periodic elections to maintain a democratic facade, while otherwise doing very little to reform the system and make it more representative. For many in the country these were empty gestures designed to perpetuate the regime’s longevity.

For instance, in the new constitution the president will no longer be able to serve for more than two consecutive terms. Prime ministers will be named by a parliamentary majority, but the president will retain the power to dismiss them. The top hierarchy of the Algerian military was behind the choice to concentrate power in the presidency, which it effectively controls. That is how it has dominated political life since Algerian independence in 1962.

Similarly, when it comes to human rights, the new constitution favours freedom of speech and assembly. This is particularly striking because the regime at present has intensified its repression of the population. Journalists, bloggers, activists, and ordinary citizens are continuing to be jailed, and the authorities have continued to conduct arbitrary arrests and block access to news websites such as RadioM, Maghreb Emergeant, Interlignes, and Tout Sur l'Algérie.

Thirdly, the referendum aggravated the regime’s legitimacy crisis because it side-stepped the systemic political changes for which Algerians have called, such as more transparency in decision-making and governance. For instance, the authorities hid the fact that Tebboune had tested positive for Covid-19, with Algerians only learning of this because of a tweet by Saudi Arabian Crown Prince Mohammed bin Salman.

In a clear reminder of the dissembling that characterised public statements on the health of former president Abdelaziz Bouteflika, the population feels that it continues to be lied to. This lack of transparency and disdain for the people is something that Algerians will no longer accept.

The Algerian authorities’ organisation of a referendum on a constitution is nothing new. Every president has sought to leave his mark through such a process. Bouteflika did so as well. Nevertheless, the difference between him and Tebboune was Bouteflika’s capacity to improve the living standards of millions of Algerians while subordinating the business class to his authority. Tebboune, in contrast, is being undermined by the severe economic conditions in the country, magnified by the COVID-19 pandemic, which are making it difficult for the president to gain traction among the population.

Most importantly, it is hard for Tebboune to convince Algerians about the imminence of a "new Algeria". Algerians are no longer willing to accept ageing leaders who use a veneer of democracy to maintain their rule. Rather than through dependency, they want a leadership model that produces legitimacy through genuine reforms, which might be hard to bring about in the coming years.

Dalia Ghanem is a resident scholar at the Malcolm H. Kerr Carnegie Middle East Center in Beirut, where her work examines political and extremist violence, radicalisation, Islamism, and jihadism with an emphasis on Algeria.

The Algerian state's insufficient response to a recent spate of femicides has driven hundreds of women to defy coronavirus lockdown restrictions to take part in street protests, ... END_OF_DOCUMENT_TOKEN_TO_BE_REPLACED

EU parliamentarian Dietmar Koester criticises the Union's failure to speak up when faced with human rights abuses committed by its Middle Eastern allies, while pointing out that ... END_OF_DOCUMENT_TOKEN_TO_BE_REPLACED

On the 10th anniversary of the Arab Spring we can’t quite escape that substance called remembrance. Yet, eschewing facile modes of nostalgic remembrance and/or tragic lamentation ... END_OF_DOCUMENT_TOKEN_TO_BE_REPLACED

In her third and most recent novel, Paris-based Algerian author Kaouther Adimi writes almost prophetically about a rebellion by a handful of children against the rigid and ... END_OF_DOCUMENT_TOKEN_TO_BE_REPLACED

Mass protests began in Egypt on 25 January 2011. They triggered the overthrow of long-time ruler Mubarak. Ten years later, many human rights activists and journalists are in ... END_OF_DOCUMENT_TOKEN_TO_BE_REPLACED

END_OF_DOCUMENT_TOKEN_TO_BE_REPLACED
Social media
and networks
Subscribe to our
newsletter