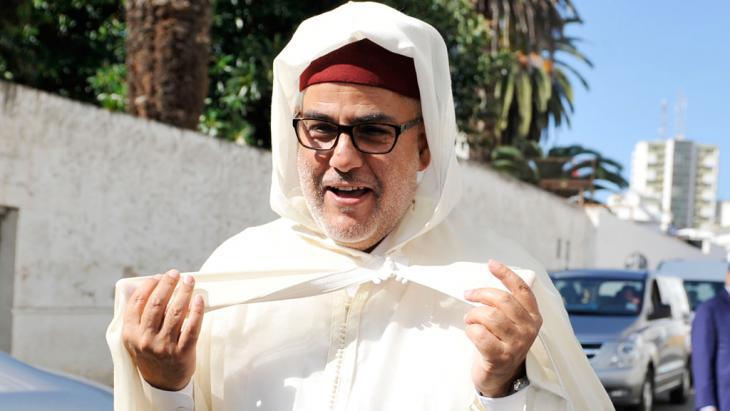 29 July 2014 marked the third anniversary of the adoption of Morocco's new constitution, the most prominent outcome of the protests led by the 20 February movement. The 2011 constitution (drafted by a committee whose members were appointed by the king) sought to empower the country's political parties in order to reduce the authority of the king.

For instance, Article 7 states that parties "concur in the expression of the will of the electors and participate in the exercise of power." The same article goes on to state that "the organisation and functioning of the political parties must conform to democratic principles," aiming to address the lack of internal democracy within most parties that had weakened their ties to voter bases and society at large.

These constitutional changes, together with the people's renewed interest in politics – ushered in by the protests of 2011 – were meant to strengthen Morocco's political organisation. But it seems that only one party has benefited so far, the Justice and Development Party (PJD), which is increasingly becoming the most powerful political group in the kingdom.

Changes across the board

Morocco's political system is still evolving, but the broad outlines of what has changed since 2011 are visible. The new atmosphere of political activism and outspokenness among the general public encouraged political parties' voter bases and their local officials, including those who participated in the 20 February demonstrations, to press more insistently for their rights within their respective parties. These demands have in turn pushed party leaders to increase the number of members in their leadership bodies and strengthen communications with their local branches.

Parties large and small alike have tried over the past three years to give a greater role to their youth and women. The United Socialist Party (PSU), for instance, chose as its leader Nabila Mounib, one of the few popular political figures who supported the street protests from their onset in early 2011. At the same time, the PSU opened its doors to activists from the protest movement, integrating several dozen 20 February activists as members.

The Party of Progress and Socialism (PPS) also appointed as head of its parliamentary delegation Rachid Roukbane, one of the youngest members of parliament. Young leaders in the Islamist PJD, meanwhile, benefited directly from the new youth quota for parliamentary elections and took on a more prominent role among the party's delegation to the House of Representatives. These PJD youths rose in stature inside and outside the party, including MP Khaled Boukarai, one of the more visible critics of the regime, who now heads the party's youth branch. 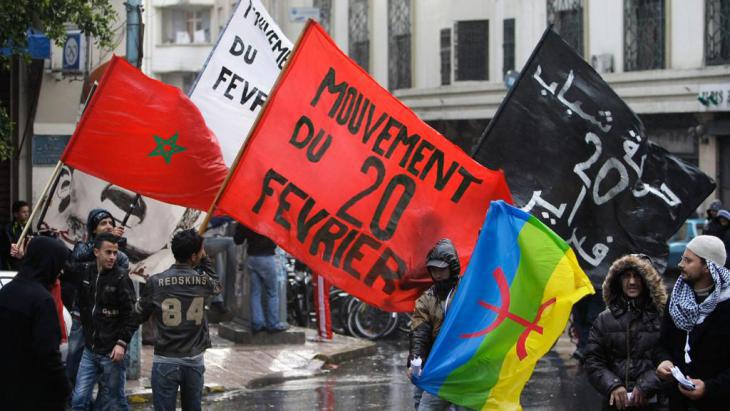 Pressure from the streets: faced with continuing protests in 2011, King Mohammed VI was forced to introduce constitutional reform and to make political concessions to the opposition in order to take the wind out of the sails of the 20 February protest movement. Pictured here: supporters of the 20 February movement demonstrating against the Moroccan government in Casablanca in November 2011

The PJD, whose secretary-general Abdelilah Benkirane is prime minister, was best situated to reap the benefits of this new climate. For the first time since 1960, Morocco appears to have two political leaders, with a separate head of state and head of government. But the leadership role played by the prime minister helps the deeply conservative Moroccan political imagination – long completely controlled top-down from the palace – become accustomed to the idea of a separate national entity whose rhetoric is independent of the palace's.

The nature of the premiership allows Benkirane to express from time to time that his "relationship with the king is not always perfect," indicating some disharmony and tension. This separation has given the PJD and its leaders some measure of immunity from public scrutiny when policies initiated by the palace fail or are ill-received, providing the party with a political lifeline and long-term durability as an institution.

Adding to his party's success, Benkirane has the ability to press the palace, on occasion, to respect the government's political character and the prime minister's legal status. Last June, he vocally asserted his right to supervise local elections, even though the Interior Ministry had been charged with running the technical aspects of the voting process and (in co-ordination with the government's general secretariat) drafting the needed legislation. Because the Interior Ministry is under the control of the monarchy, this gives a sense of the party's desire to ensure separation of powers within the government.

But most other parties failed to take advantage of the changing political atmosphere. Rather than try to benefit from the new interest in politics, the elite-dominated parties grew ever more divorced from ordinary Moroccans – contrary to the stipulations of Article 7. The role of the local loyalist political notables continued to grow, as they took control over the village-level branches of what had been opposition parties and rose through the party ranks.

These local notables gained strength in numbers at the parties' national congresses, giving them bargaining power with potential party leaders and the political bureau. Local elites' control over the bulk of the largest parties, including the Socialist Union and the Independence (Istiqlal) Party, not only curbed their former criticisms of the palace, but also distorted their internal structures and weakened their ties to labour unions and civil society organisations, which had historically played a key role in Moroccan parties.

In an attempt to remedy their declining popularity, some parties have sought to embrace a religious character – all the while staying away from the political Islam on which the PJD has a monopoly. This religious character has focused on drawing clearer links to Sufi Islam.

Recently, two historical leaders of the Socialist Union for Popular Forces, Fathallah Oualalou and Mohamed El Yazghi, announced they were joining the Sufi Boutchichiya Order. While both leaders of the largest leftist party in Morocco might have joined a Sufi brotherhood for personal reasons alone, the need to publicise the decision suggests other motivations as well. 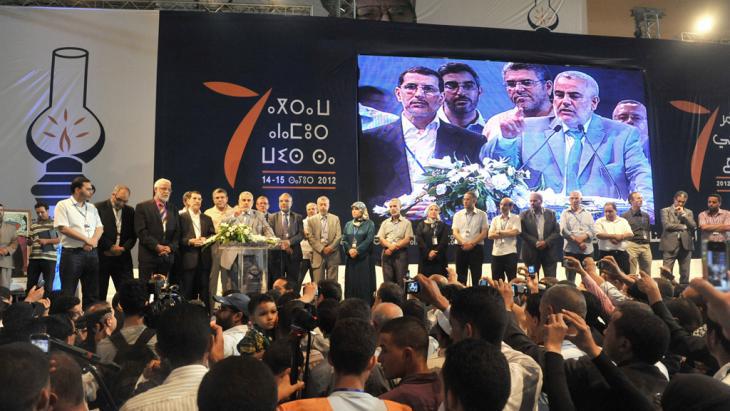 Morocco's ruling party, the Justice and Development Party (PJD), has benefitted from the new political order in the north African country: "The PJD, whose secretary-general Abdelilah Benkirane is prime minister, was best situated to reap the benefits of this new climate. For the first time since 1960, Morocco appears to have two political leaders, with a separate head of state and head of government," writes Maâti Monjib

Their choice of this Sufi order also raises questions. Indeed, the Boutchichiya Order has become the semi-official religious face of the current political system, with close ties to a number of high-ranking officials, who join to facilitate their own promotions or express their devotion to the regime. As for Sheikh Hamza, the head of the Boutchichiya Order, he made no bones about his organisation's new political role, saying when Oualalou and El Yazghi joined that "If the Unionists had incorporated the divine light into their plans, then their party would have risen to the top."

In an article in "Al-Massae", a top-selling Moroccan newspaper, Mohammed Al-Sassi, a leading analyst, explained that most of the former opposition parties chose to deal with their declining electoral popularity "by adopting the 'easy solution'" by importing local elites that had previously belonged to loyalist parties. Veteran party members are gradually losing their grip on power to these local elites.

Certainly the PJD does not control every government decision. King Hassan II, during the 1960s and 1970s, laid the foundations of a system whereby rigged polls allowed parties loyal to the palace to control parliament. Now, however, if the PJD succeeds in keeping its organisational independence, popular electoral base, and immunity from local notables until the end of the current legislative term, this could mean the beginning of the end of the traditional party scene.

Home
Print
Newsletter
More on this topic
Democratic change in Morocco: The right king in the wrong monarchy?Prince Moulay Hicham el Alaoui of Morocco: The diary of the red princeMorocco's Islamist Justice and Development Party: A delicate balancing actThe Moroccan pro-democracy movement: Down, but not out
Related Topics
Arab Spring, Arabellion, Democracy and civil society, Mohammed VI of Morocco, Moroccan opposition
All Topics

Tourists have been returning to Tunisia, Egypt and Morocco. But, given the global uncertainty caused by the Ukraine war, will the comeback be enough to save a struggling sector, ... END_OF_DOCUMENT_TOKEN_TO_BE_REPLACED

In Morocco, the bicycle is considered a poor man's means of transport. What's more, cycling tends to be a male-only affair. The Pikala bike initiative in Marrakesh seeks to change ... END_OF_DOCUMENT_TOKEN_TO_BE_REPLACED

END_OF_DOCUMENT_TOKEN_TO_BE_REPLACED
Social media
and networks
Subscribe to our
newsletter