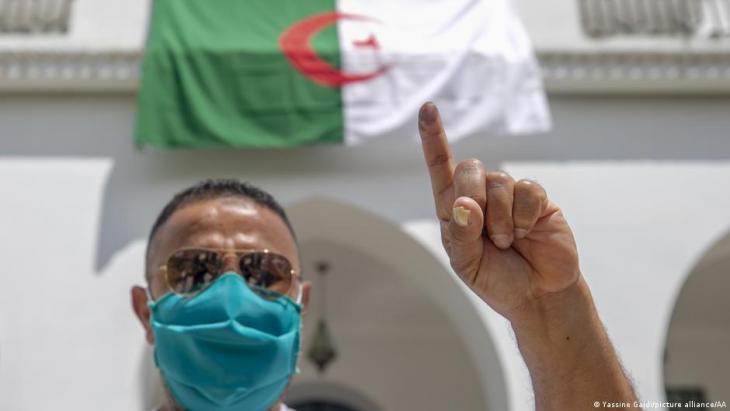 Saturday's historically low election turnout was a reflection of Algerians' ongoing frustration with the political status quo. Faced with mounting state repression, however, the likelihood of the Hirak evolving from popular protest movement into a significant opposition force appears slim. By Ilhem Rachidi

As the Hirak movement’s second birthday approached in February 2021, demonstrations resumed throughout Algeria. After the year of pandemic-induced quiet, people suddenly returned to the streets – reviving demands for the departure of the country’s rulers and a true democratic transition. As protestors chanted familiar slogans, popular support for the movement seemed intact.

Over the past four months, the Hirak has continued to attract a considerable number of protesters, although fewer than in the movement’s early days. But the Algerian regime has yet to make true political concessions; it has maintained the political status quo, while ignoring increasing pressure for reforms and profound transformations taking place in Algerian society. Since the beginning of the Hirak, Algerians have re-discovered politics, becoming more critical of the regime's real decision-makers: army leaders.

Though the Hirak forced out Abdelaziz Bouteflika, Algeria's longest-serving president, it has not achieved significant political change. Bouteflika’s replacement Abdelmajid Tebboune was picked by the army, just like all Algerian presidents since independence. Furthermore, Algeria’s new constitution, adopted in November 2020 in response to the Hirak, still gives most powers to the president alone.

In the spirit of demands for a new political dynamic Algerian activists converged on the city of Kherrata, site of the first Hirak march in 2019, on 8 May. In Kherrata, Hirak participants sought to build community within the movement and initiate discussions elaborating their political demands. This first-of-its-kind meeting represents the Hirak’s modest organisational progress.

#Algeria : Seems to have been even lower turnout in parliamentary election than in presidential election #الجزائر pic.twitter.com/CaOkc8yF5p

Rather than resulting in unified or action-ready demands, activists meeting in Kherrata simply agreed to hold a national conference. The meeting is unlikely to take place; however, as several of those who were to attend have been jailed, summoned, or put under judicial supervision. Meanwhile, Algerian authorities have demanded protesters obtain permits for demonstrations and taken steps to ban organisations supporting the Hirak, for example the Rassemblement Action Jeunesse (RAJ).

The movement endures despite these pressures and has had a significant impact on Algerian society, but has yet to produce substantive democratic changes for Algerians. Today, most activists agree that their goal of a democratic state, with a separation of powers and an independent justice system, is further out of reach than initially expected. In the early days of the movement, Hirak protesters trusted that their weekly demonstrations would provoke radical change and force political renewal.

But once Abdelaziz Bouteflika departed the presidency in April 2019, the military as well as the international community apparently decided that was enough. Hailing the peaceful nature of the Hirak and welcoming Bouteflika’s departure, the international community did not press for further change. And ten years after the Arab Spring, with authoritarian regimes still in place across the region, no external actors are exerting pressure for democratic reforms on Algeria's regime. The need for a stable Algeria, an oil-rich country and major U.S. partner in the war against terrorism, is often cast against fears of North African instability in global capitals.

Lack of international political will

This lack of international political will to encourage democracy in Algiers hinders the Hirak, but in the end this might actually destabilise Algeria. From February 2019 until the pandemic forced their halt, the – unexpectedly – peaceful protests united Algerians of diverse demographic and ideological backgrounds.

With the social and economic crisis exacerbated by the pandemic and shrinking oil revenues, violence is a growing possibility should Algeria’s leaders continue to ignore the demands for economic development in its most marginalised regions. January 2021 protests against the lockdown in Laghouat and February riots in Ouargla after the heavy sentencing of activist Ameur Guerrache foreshadow threats of uncontrollable, widespread social violence. 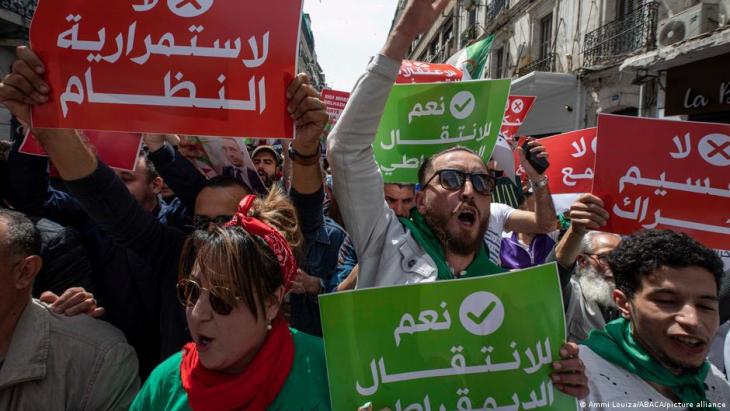 An impossible task: the Hirak has failed to present a viable political approach. Paradoxically, this is partially due to the motivations initially bringing Algerians to the streets. No political elite can translate the popular demands for change and democratisation in the country. And, like other protest movements in the region, the Hirak faces an impossible task: it is expected to compensate for the long-term repression of all political alternatives, writes Rachidi

Algeria’s political leaders meanwhile continue to dismiss the impacts of the popular movement. In February 2021, when announcing legislative elections, President Tebboune seemingly trivialised the “blessed Hirak'' when praising the movement in his proclamation. As with previous votes, these elections will not change the political equation. Rather, they provide another opportunity for the regime to delay inevitable change by renewing its partisan support, dividing the opposition over the participation at the polls, and forcing the Hirak to propose a political alternative.

So far, the Hirak has failed to present a viable political approach. Paradoxically, this is partially due to the motivations initially bringing Algerians to the streets. No political elite can translate the popular demands for change and democratisation in the country. And, like other protest movements in the region, the Hirak faces an impossible task: it is expected to compensate for the long-term repression of all political alternatives.

Political parties, trade unions, and local organisations have been co-opted for decades. And the parties supporting the Hirak – the Socialist Forces Front (FFS), the Rally for Culture and Democracy (RCD), and others – were weakened during Bouteflika's reign and allowed little popular support. Moreover, groups supporting the Hirak encounter great difficulties in organising, with authorities preventing most attempts to gather for meetings, especially during the pandemic.

Although frameworks for online discussions such as "Nida 22" have emerged, the Hirak has not issued a platform of demands. A major difficulty lies in the ideological diversity of the movement, leading to postponement of discussions surrounding divisive issues. Some activists believe women's rights are secondary; others claim it is not the right time to fight for a secular state.

At first, these differences were considered an asset as protestors unified around the sole objective of deposing the regime. But tensions between secular activists and Islamists of the Rachad movement, set aside in the early days, have become more evident. The regime and its supporters have exploited these ideological oppositions and in May declared Rachad a terrorist organisation.

While the Hirak struggles to become politically relevant and to transform from a street movement into a possible opposition force, the government has stepped up repression. More than 6,200 people have been detained and 1,800 prosecuted since the resumption of the Hirak marches this year. While detentions are often brief, Algerians are routinely subjected to police violence. On several recent occasions, protesters have been dispersed and prevented from gathering for marches. And in May, the detentions of Hirak protesters increased dramatically to at least 226 instances.

By comparison, when the Hirak resumed in February, only 30 people were in detention for politically related motives, after 39 had been released following a presidential decision. Some former prisoners are even being sent back to prison. In Chlef, Ali Mokrane, pardoned by Tebboune in February 2021, received a six-month sentence in April for, among other charges, undermining the image of the president.

In the two months prior to the December 2019 presidential ballot, more than 2,000 people were arrested. As the legislative elections approach, the test of strength between the regime and the Hirak continues, with many activists fearing they might be experiencing the start of a stronger and lasting crackdown. But despite the ongoing intensification of state repression and the banning of protests, it seems unlikely protesters will remain in their homes.

Algerian scholar Said Djabelkhir rejects the charge of "offending Islam". In interview with Ismail Assam, he maintains that he has been wilfully misconstrued. At the same time, he ... END_OF_DOCUMENT_TOKEN_TO_BE_REPLACED

Morocco and the European Union are at cross purposes when it comes to the Western Sahara. And, as Germany does not support Moroccan claims to the territory, a major conflict has ... END_OF_DOCUMENT_TOKEN_TO_BE_REPLACED

Recep Tayyip Erdogan, disappointed by the European Union’s reluctance to integrate Turkey into its ranks, has re-directed his country’s diplomacy toward the Maghreb and Africa to ... END_OF_DOCUMENT_TOKEN_TO_BE_REPLACED

Using a graphic novel to address a contentious issue like the Algerian war of independence may seem an odd choice, but new release "Algeriennes", translated into English by Ivanka ... END_OF_DOCUMENT_TOKEN_TO_BE_REPLACED

Since February 2019, millions of Algerians have been demonstrating against the government. They first took to the streets to demand more democracy and protest the renewed ... END_OF_DOCUMENT_TOKEN_TO_BE_REPLACED
Author:
Ilhem Rachidi
Date:
Mail:
Send via mail

END_OF_DOCUMENT_TOKEN_TO_BE_REPLACED
Social media
and networks
Subscribe to our
newsletter