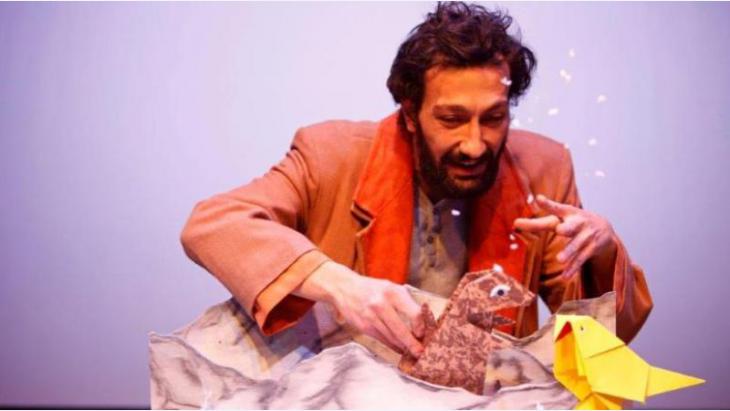 A theatre in Leipzig has stuck its neck out and brought a children′s play about refugees to the stage. The main actor fled Syria himself and the story he conjures up out of his suitcase is both educational and funny. An integration project for everyone involved – those from here and from elsewhere. By Inge Gunther

The bird is called Elsewhere and he comes from elsewhere too. The marmot finds that hilarious; she laughs her head off. "Elsewhere from elsewhere" – have you ever heard anything like it? The children giggle, too. But once the marmot, whose name is Ma, has had a good laugh, she takes pity on this strange, yellow-feathered bird, who is shivering with cold and feeling so very foreign and alone in the snowy mountains. She invites him to stay the night in her burrow, which is warmed by glow-worms. Once again, Elsewhere Bird finds a little happiness in the midst of his unhappiness and someone to help him on the long, difficult journey from Damascus to Europe.

The story of his adventure is told in a play for children aged four and up, which is currently playing (until the end of May) at Leipzig′s Theater der Jungen Welt. It is acted by Soubhi Shami (28), who is himself a Syrian refugee. Shami acted in Aleppo, learned puppetry in Beirut and in nearly three years in Germany has picked up the new language extraordinarily well – making him the perfect actor to be addressing the subject of refugees with German kids.

At least, that′s what the theatre′s artistic director, Jurgen Zielinski, thought when he met the young Syrian, who is studying new media art at Leipzig University, at a workshop. And in Zielinski′s view Saxony, where the right-wing nationalist party AfD (Alternative for Germany) won 18 to 27 percent of the vote in many areas at the last election, is the very place to build bridges to greater understanding.

Zielinski also knew at once who else he had to hire to build these bridges: Stephan Wolf-Schonburg, an actor who spent a few years in the Middle East during his youth because of his father′s job and who later worked for some time as an acting coach at the Freedom Theatre Jenin in the West Bank. "Make me a refugee play for children," Zielinski said, "You worked in Palestine, after all." 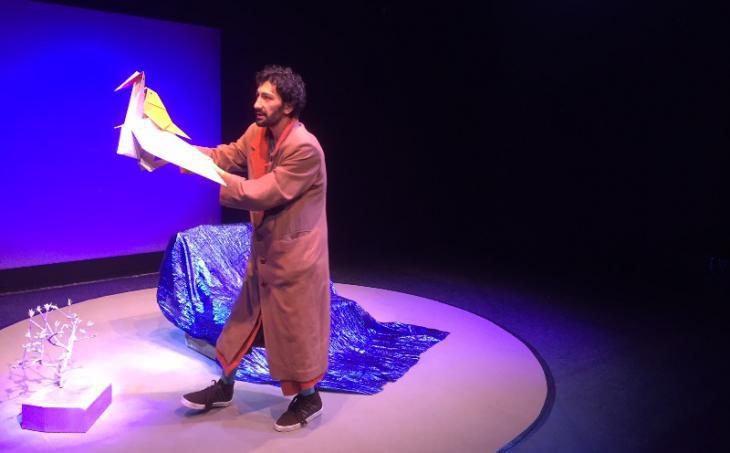 Raising refugee awareness among German kids: the story of Elsewhere Bird′s adventures is told in a play for children aged four and up, which is currently playing (until the end of May) at Leipzig′s Theater der Jungen Welt

At first, Wolf-Schonburg was hesitant. "I mean, I′d never written a play before." But then he remembered his own childhood and the bedtime stories he had made up for his brother. That turned out to be a source of inspiration for this challenge, as he took on a new dual role as playwright and director. The result is a play filled with poetry, a fantasy that draws on the reality of life. "My aim here," says Wolf-Schonburg, "is to show what it means to be away from home and to be confronted with the fact that you are a foreigner."

A world of origami creations

And so Der Vogel Anderswo starts with a language game. The narrator, Soubhi Shami, enters to loud drumming, wrapped in a kaftan-like coat and dragging a heavy suitcase. He starts chatting away cheerfully to the audience in Arabic – until he suddenly realises that the children probably don′t understand any Arabic. And so he gives them a quick lesson, teaching them the greetings "Salaam" and "Marhaba" and "Mabrouk" – congratulations – which they all call out in chorus, before he conjures up his story out of the suitcase.

He has an incredible number of things in there: a whole world of beautifully folded origami creations that Soubhi gradually brings to life. And a host of simple props that are transformed into the desert, wind and waves. But first, Soubhi takes out a picture-book image of the city of Damascus. The city is home to Nunu, a little boy who keeps a freedom-loving bird in an open cage. 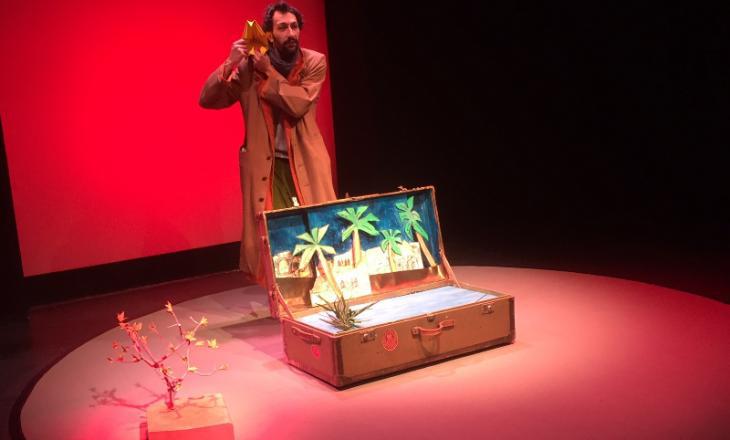 The play is acted by Soubhi Shami (28), who is himself a Syrian refugee. Shami acted in Aleppo, learned puppetry in Beirut and in nearly three years in Germany has picked up the new language extraordinarily well

Because the bird spends more time out and about than he does at home, he has earned the name Elsewhere. But one day, when Elsewhere returns from one of his outings, the family is gone. They have fled like so many others, running down the street. War has broken out.

Left alone, Elsewhere goes looking for them. Without a woman in an oasis who sings a song to make him feel better; without a stork who takes him under his wing on the long journey across the wide ocean; and of course without the marmot who gives him shelter in the Alps, he would be lost.

Thanks to them, he eventually reaches Germany and perches, exhausted, on a church tower. But very quickly, a cheeky flock of crows tells him it′s their place – he can′t stay. Luckily their leader, Captain Caw, comes to his rescue. Finally, in a miraculous turn of events, Elsewhere finds his friend Nunu, who has left his favourite food, a piece of apple, on the window ledge. The family is successfully reunited.

No images of war 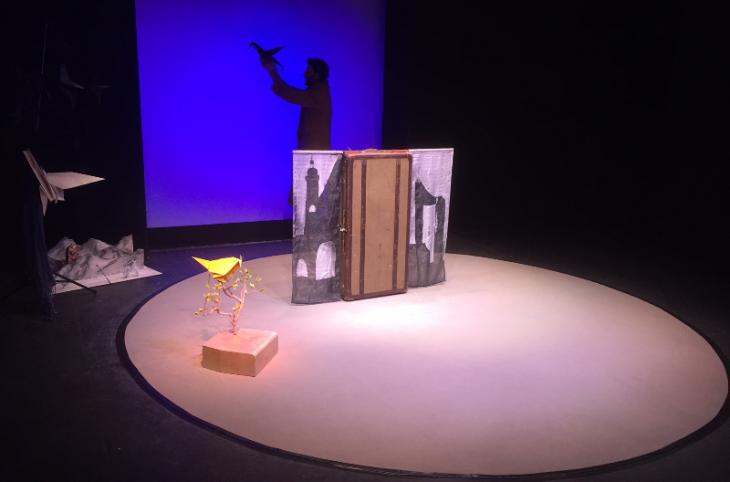 The play′s the thing: several pre-schools have already booked the refugee play and Soubhi Shami recently even performed it in a retirement home, in front of pensioners and children. He is less keen to talk about his own refugee odyssey, or about his family, some of whom stayed in Syria. His memory of the war is too traumatic for him to risk raking it up

The children breathe a sigh of relief. They have followed the story as if spellbound. What do they take home? Perhaps the question – and if so, then the play′s deeper meaning has resonated with them – of what other people who come from elsewhere might have been through.

Playwright Wolf-Schonburg puts it this way: "It′s my aim with this play to open children′s hearts and minds to what is foreign." And you can′t start that process early enough, especially in Saxony, a frontrunner when it comes to xenophobic attacks.

Several pre-schools have already booked the refugee play and Soubhi Shami recently even performed it in a retirement home, in front of pensioners and children. He is less keen to talk about his own refugee odyssey, or about his family, some of whom stayed in Syria. His memory of the war is too traumatic for him to risk raking it up.

And for that reason he also insisted that in the play, the outbreak of war, when Elsewhere Bird is separated from his friend Nunu, shouldn′t be embellished any further. He didn′t want to frighten the children, either. "It′s a sad enough subject as it is," he says, "You don′t need images of war on top of that."

After the al-Qaida terrorist network attacked the US on 11 September 2001, Germany backed the US-led military and diplomatic mission in Afghanistan – and still does. Nineteen ... END_OF_DOCUMENT_TOKEN_TO_BE_REPLACED

When hundreds of thousands of refugees crossed Germany's borders in 2015, Chancellor Angela Merkel promised: "We can do it!" This is the story of how Iraqi refugee Raisan Hameed ... END_OF_DOCUMENT_TOKEN_TO_BE_REPLACED

In the first case of its kind anywhere in the world, a German court is probing Syria's state torture system. Giving testimony at the trial is one of Syria's most widely respected ... END_OF_DOCUMENT_TOKEN_TO_BE_REPLACED

Five years ago, as hundreds of thousands of refugees came to Germany, Chancellor Angela Merkel maintained: "We can do it." How has Germany – and those who sought asylum – managed ... END_OF_DOCUMENT_TOKEN_TO_BE_REPLACED

Five years ago, Samer Serawan spent many long, cold nights in a muddy courtyard in Berlin, one of many Syrians who queued up to live in Germany. Now he has a successful restaurant ... END_OF_DOCUMENT_TOKEN_TO_BE_REPLACED
Author:
Inge Günther
Date:
Mail:
Send via mail

END_OF_DOCUMENT_TOKEN_TO_BE_REPLACED
Social media
and networks
Subscribe to our
newsletter