The Rebel Submits to Islam

Adieu to feminism! Diam's, France's rebellious rapper, has turned to Allah. The voice of youth from the Parisian suburbs no longer seeks salvation in rebellion, but rather through religion. France's feminists are not the only ones up in arms over this. Axel Veiel reports from Paris on the details 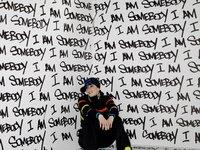 ​​Diam's is a vocal acrobat. Her gruff staccato suddenly transforms into a pleasing legato, expressing her rage and sorrow in a unique way. With reference to the title of her ten-minute biographical song "I am somebody" that appears on her new album "SOS," one could also say "Diam's is somebody."

For the last two years, the 1.68 metre tall woman with closely cropped hair and a mischievous smile has been France's greatest rapper. With her 2007 album, "Dans ma Bulle", the brat from Paris's suburbs stormed the masculine domain of rap and sold more disks than any other musician in France. Young people have celebrated her since. This is especially the case for the children of Arab or black African immigrants forced to live on the outskirts of the French metropolis.

The outcry of socially disadvantaged youth

Born Mélanie Georgiades, the half-French, half-Cypriot rapper offered herself as a role model. She poured out her soul in songs about her frustrations living in the high-rise ghetto and called out for revolt. She was a free woman and successful immigrant who sought to encourage her less free and less successful youthful compatriots. Even abroad, people sat up and took notice.

The international Hip Hop community has also acknowledged that rap music in France is still what it used to be in the USA – the outcry of disadvantaged youths growing up in the ghetto. 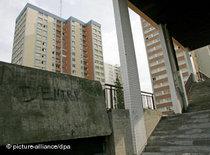 No longer in the Ghetto: For the generation of socially disadvantaged youth growing up in France's banlieus, Diam's has betrayed her roots

​​The 29-year-old has now brought out a new album. Musically, the CD that was released last Monday is on an equal par with her former work. Nonetheless, it is entirely different. Teenagers, who had looked up to Diam's as a role model, have suffered a shock. Feminists, who have championed her as one of their own, now accuse her of betrayal.

Diam's struggle is no longer for freedom and equal rights, but rather for traditional gender roles. "Because no one can change these roles," she assured in her song "Asphaltrose". If her husband was a Kalashnikov, she sings, she would gladly be the shoulder supporting him.

What is particularly shocking to her fans is that the rapper acts accordingly. Diam's, who converted to Islam in 2000, was photographed in front of a mosque by the magazine "Paris Match" in October. She stands there covered completely in black except for her eyes, nose, mouth, and chin. The Diam's that fought for women's rights and who called upon her "generation non non" to resist the 'other' France that "lets the poor simply rot and locks up their own parents in hospices while celebrating the new Beaujolais."

Comfort for a troubled soul

"Diam's' veil is a step backwards, a defeat," says the writer Djemila Benhabib indignantly. The women's rights group "Neither Whores nor Submissives" laments this "sorry message to a whole generation". Under the condition of anonymity, a teacher in the Parisian suburb of Créteil says that the 16 and 17-year-old girls in her class have been left shaking their heads. "Diam's has understood nothing" is the general consensus.

Desire for resistibility and permanence: Mélanie Georgiades aka Diam's

​​"Doctors couldn't heal my soul, so I turned to religion," is the rapper's answer to her critics. She had already confessed to having a wounded soul long before religion took on such an important role in her life.

As a child of divorced parents, she moved to France with her mother in 1984 and grew up without a father. "I was a girl that didn't expect anything from life. The only thing in my schoolbag was anger," sings Diam's. She tried to kill herself when she was 15. She found salvation in rap until she became a victim of her own success. She couldn't cope with the pressure from her fans, the paparazzi, and her music management. She sought help from psychiatrists for almost a year. Then she turned to Allah.

Here she remains firm. She refuses to answer any more questions concerning her new religious lifestyle. She has broken off contact to journalists. Her resolve won't be broken. When she first decided to call herself Diam's, it was "because diamonds are so hard that they can only be broken by other diamonds".

Hip-Hop in Yemen
Looking for a Common Beat
At weddings, on car radios and while chewing intoxicating qat leaves: the traditional sounds of the lute can be heard everywhere in Yemen. Now, however, the country's first ever hip-hop concert was staged in the capital. Klaus Heymach reports

END_OF_DOCUMENT_TOKEN_TO_BE_REPLACED
Social media
and networks
Subscribe to our
newsletter