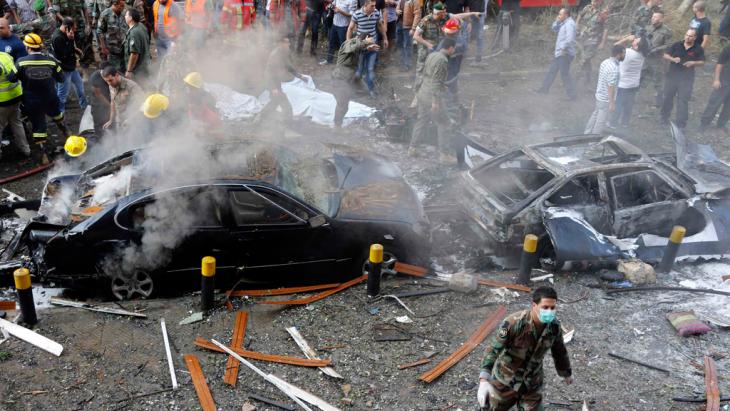 Hezbollah after the Beirut Attacks
A Battle on Many Fronts

In Syria, Hezbollah is backing the Assad regime in the fight against the rebels, as a way of defending the Iran-Syria-Hezbollah alliance. This has been met with great hostility at home in Lebanon, and is provoking reactions on the Salafist front. Background from Juliane Metzker

We are now used to seeing these images from the Lebanese capital Beirut: burning cars, damaged buildings and bewildered faces. The attack carried out by two suicide bombers last Tuesday (19.11.2013) next to the Iranian embassy claimed at least 25 lives and injured more than 100. It's the third explosion to hit Hezbollah-dominated areas of Beirut since July.

The last attack is now being interpreted by the media as a message to their allies, to Iran and as a direct response to the military operation being conducted by the Syrian army and Hezbollah in the strategically important border area of Qalamoun. More than 10,000 people have already fled the embattled region.

A short time after the double attack, responsibility was claimed by the Abdullah Azzam Brigade, an offshoot of al-Qaida. The group had previously claimed responsibility for the bomb attack close to a Hezbollah convoy in July.

Alongside all the media voices now placing Lebanon even deeper in the Syrian civil war, the question arises whether the targeted attack will impact upon Hezbollah's strategy in the region and weaken its position.

Hezbollah as an important ally of the Assad regime

In his speech during the Shiite Ashoura procession, Hezbollah leader Hassan Nasrallah addresses his supporters in the way he always has done: "With our presence in Syria, we are defending the Lebanese, Palestinian and Syrian state, which is supporting the resistance." 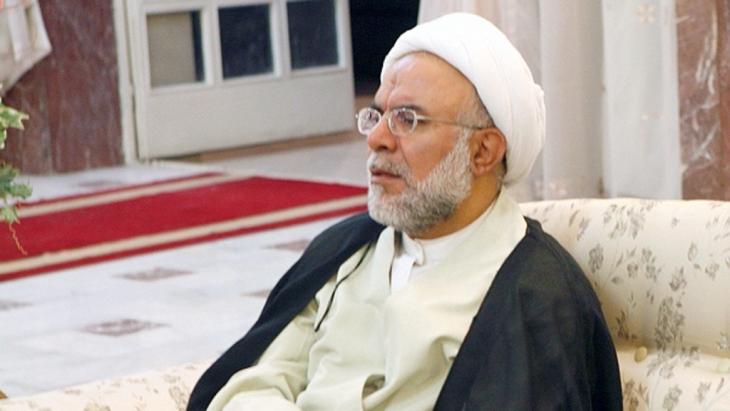 An act of reprisal for Iran's support of Hezbollah in the Syrian civil war? Victims of the attack close the Iranian embassy in Beirut included Iranian cultural attaché Ibrahim Ansari

Hezbollah's demonstrative resolve would appear to be unbroken, but Stephan Rosiny of the GIGA Institute for Middle East Studies perceives its cooperation with the Syrian regime as being motivated by two essential fears: "On the one hand it fears the further strengthening of militant Sunni Salafism in the region, which is strongly anti-Shiite and which could spill over into Lebanon. On the other hand, the Syrian regime has always been the link between Lebanon and Iran," he says.

The confessional battle is showing its most extreme form in Syria. But the organization is also facing increasing hostility within Lebanon's borders, Rosiny observes: "There's a mood in Lebanon currently that's highly critical of Hezbollah, because it's been accused of dragging Lebanon into the Syria conflict. On the Salafist spectrum, strongly anti-Shiite traits underly this criticism."

One of Nasrallah's self-appointed opponents, Sheikh Ahmad al-Assir proved that he could mobilize numerous Sunni fighters in Lebanon to counter Hezbollah in, among others, the battle for the small Syrian town of Qusair. In the end, however, Hezbollah and the Syrian regime were victorious in Qusair, which is of huge strategic advantage due to its proximity to the Lebanese border.

"But with his attack on the Lebanese army in Sidon, Sheikh Ahmad al-Assir has undermined his own credibility, because the army is still generally regarded as the only intact symbol of national unity," says Rosiny. The fighting began in the port town last June, when soldiers stopped a supporter of Assir at a checkpoint. 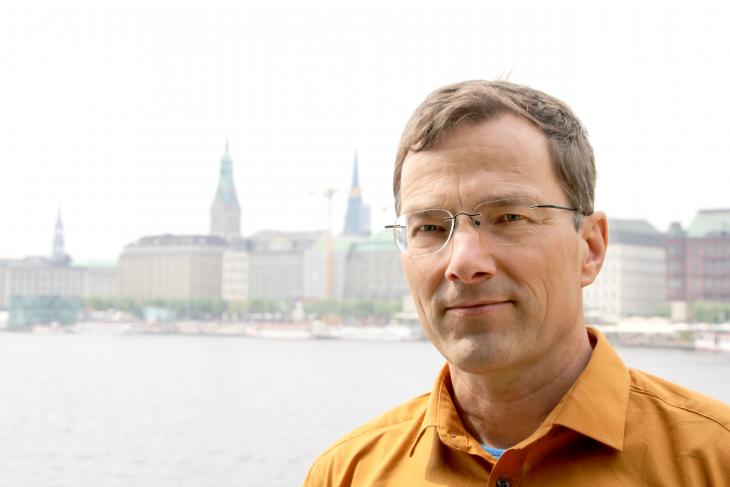 Dr. Stephan Rosiny works as a researcher at the GIGA Institute for Middle East Studies, and is currently focusing on political Islam, the conflict between Sunnis and Shiites as well as politics and society in Lebanon and Syria.

But the Sheikh is by no means the only one ready to go to war against the dominant Shiite militia and thereby also against their Iranian sponsors, after all a victory on the Salafist front would likely usher in fundamental consequences for a political new order in the region.

Political scientist Rami Khouri from Beirut's American University confirms such a scenario: "If Syria and the Assad regime should fall, this would be a huge setback for Hezbollah and Iran," he says. They would then be geographically isolated within Lebanon, with Syria and Israel as neighbours hostile to the Shiite militia. Hezbollah would not be able to disengage from the continued support of the Syrian regime in future, unaffected by pressure from the hostile camp.

A less acute dilemma for Hezbollah, but for Lebanon, is its domestic quarrel with the Sunni-dominated "14th March Alliance". It forms the opposition to parties within the "8th March Alliance", which comprises the Hezbollah and Amal movements, among others. Since the resignation of Prime Minister Najib Miqati last March, designated head of government Tammam Salam has not thus far convened a new cabinet. This would stabilise the country, politically at least, until elections scheduled for November next year.

But the "14th March Alliance" is not willing to form a government as long as Hezbollah is fighting in Syria. Rosiny describes this categorical refusal as a political manoeuvre: "In the end, the '14th March Alliance' is also aware that Lebanon will not be governable without a compromise between the religious communities," he says. 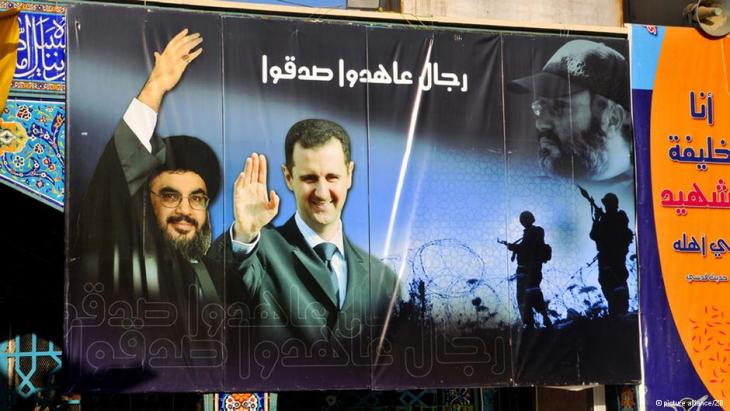 The Tehran-Damascus-Beirut axis: Hassan Nasrallah issued a straightforward refusal to the "14th March Alliance" in Lebanon, which demands that Hezbollah pull out of Syria, in order to form a cabinet under designated leader Tammam Salam

Whether at home or abroad, Hezbollah is opening itself up for attack on many fronts. It can be assumed that the last double bombing will not undermine the movement, but rather that it will boost its resolve to maintain its current course all the more decisively.

Short movies nominated for an Oscar often don't get wide public attention. But when one is about an Iranian girl seeking freedom from male domination by taking off her veil, ... END_OF_DOCUMENT_TOKEN_TO_BE_REPLACED

World-famous Iranian film director Jafar Panahi has been incarcerated for several months, even though Iran's Supreme Court overturned the verdict against him. Now, he has gone on ... END_OF_DOCUMENT_TOKEN_TO_BE_REPLACED

Young women are driving forward the protests against the Iranian regime, which have been going on for months. Literature provides clues as to why that should be, and why the ... END_OF_DOCUMENT_TOKEN_TO_BE_REPLACED

Visiting the country of her parents, murdered by the Iranian regime in 1998, German-Iranian artist Parastou Forouhar finds a changed society: hopeful, strong and courageous, ... END_OF_DOCUMENT_TOKEN_TO_BE_REPLACED

Ballet performances are prohibited in Iran. In her film "1001 Nights Apart", director Sarvnaz Alambeigi documents the history of dance in the Islamic Republic. By Fahimeh Farsaie END_OF_DOCUMENT_TOKEN_TO_BE_REPLACED

END_OF_DOCUMENT_TOKEN_TO_BE_REPLACED
Social media
and networks
Subscribe to our
newsletter