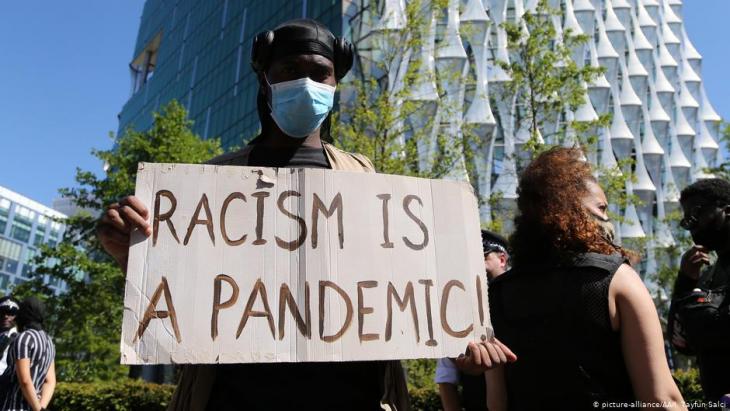 Racism exists in the Arab world. People with dark skin are discriminated against and often see their rights curtailed. Activists have had enough of such treatment and are starting to rise up. The greatest progress has been made in Tunisia. By Mona Naggar

Language, the mirror of daily life, is revealing. In standard Arabic as well as in various dialects, there are a number of racist expressions for people with dark skin. They are degrading and dehumanising because they emphasise the superiority of people with white skin. Some of these expressions can be traced back to when the Islamic and Arab world still practised slavery and were involved in the slave trade.

These expressions have outlasted slavery and even become set phrases and figures of speech that are used daily. Black is often synonymous with a bad omen in these sayings. The colours black and white are also used as opposites to stand for good or evil, with reference to the selection of a life partner, for example, or descriptions of feelings or experiences.

Nevertheless, there are signs of change: the Black Lives Matter movement has attracted much attention in Arab countries. First, there was widespread coverage in local and regional media and talk shows, as well as demonstrations of solidarity and online campaigns in support of the protests, especially in the US. Second, the movement encouraged people in the Arab region to take a closer look at racism. 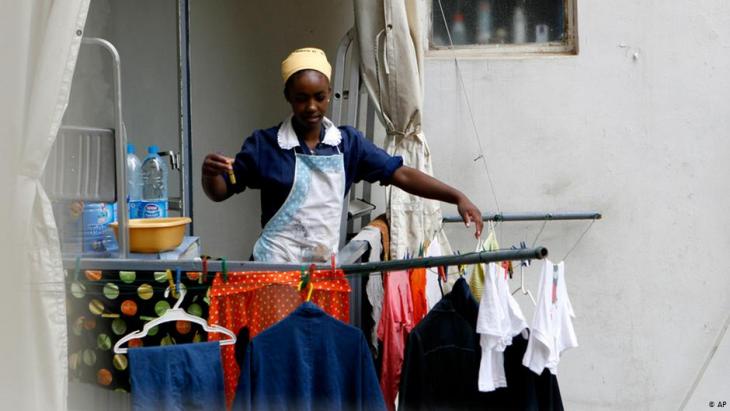 It is estimated that some 200,000 migrant domestic workers are employed in Lebanon. "The kafala (sponsorship) system means that many migrants live in slavery-like conditions. They are tied to a Lebanese citizen who is called their 'sponsor', but can actually dictate their wages and working conditions. Moreover, sponsors can restrict migrants' freedom of movement," writes Mona Naggar. Pictured here: an Ethiopian woman hangs clothes on a line in Lebanon

Zainab Mariam Kanaan understands these matter. The journalist is Lebanese, but her mother is from Sierra Leone. In June 2020, at the peak of the Black Lives Matter protests, she published an account of her personal experiences on her Facebook page, expressing solidarity with the protests in the USA and describing discrimination she has been facing since she was a child. Kanaan wrote that she was stunned to observe Lebanese expressing sympathy with Black people in the US, while doing nothing to address racism at home.

The young woman described how she was – and continues to be – confronted with debasement, insults and stereotypes at school, at university, in taxis – and even among the extended family. Stereotypes were even perpetuated in religious teaching. The famous story of Bilal, for example, is ambivalent. The first person to call people to their prayers in Islamic history, was from Ethiopia. This fact is used to prove Islam's antiracist stance. On the other hand, descriptions of Bilal use racist terms.

During her adolescence, experiences like this made Kanaan feel self-hatred, and the relationship with her mother became difficult. However, she acknowledges that, thanks to her Lebanese citizenship, she is better off than other people exposed to Lebanese racism. In particular, migrant workers from South Asia suffer. The kafala (sponsorship) system means that many migrants live in slavery-like conditions. They are tied to a Lebanese citizen who is called their "sponsor", but can actually dictate their wages and working conditions. Moreover, sponsors can restrict migrants' freedom of movement. This kafala system is in force in many countries of the Arab Gulf. 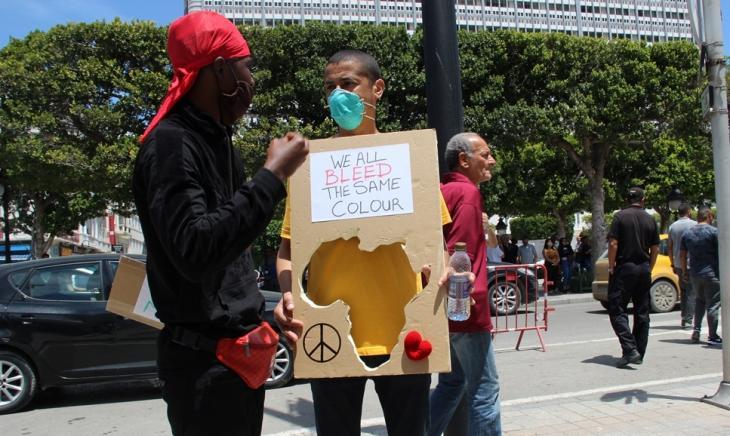 According to Mona Naggar, thanks to the work of civil society groups after the 2011 revolution, tentative progress is being made in Tunisia, the first Arab country to pass an anti-racism law. Pictured here: anti-racism protesters on the streets of Tunis in June 2020

Sana Al Fazani is from Libya's southern region. Her experiences there resembles those made by Kanaan in Lebanon. She reports that she is not taken seriously in conversation because of her skin colour, and she complains about being bullied at the university. The country's elites are mostly white, she points out.

Activists in the region agree that while people are prone to condemn racism in Western countries, they tend to be ignorant of the phenomenon in their own world region. Mohamad Azmi, the director of the Egyptian Monitoring Centre on Racism, published the results of an investigation in 2018. Together with co-authors, he examined Egyptian media, ranging from news reports to talk shows and movies. According to their findings, half of the films produced in Egypt between 2007 and 2017 disparaged or made fun of people with dark skins or Upper Egyptian dialects. People from Upper Egypt were given stereotypical roles as janitors or servants. Racist language and hate speech, moreover, was used in about one third of the talk shows and news reports that were produced between 2011 and 2016 and dealt with topics from Upper Egypt.

According to the study, the number of media jobs held by people with dark skin is vanishingly small. Therefore, one of the changes Mohamad Azmi calls for is adequate representation of people with dark skin in the media. Furthermore, he wants the media to implement ethical principles and legislators to finally pass an anti-racism law. 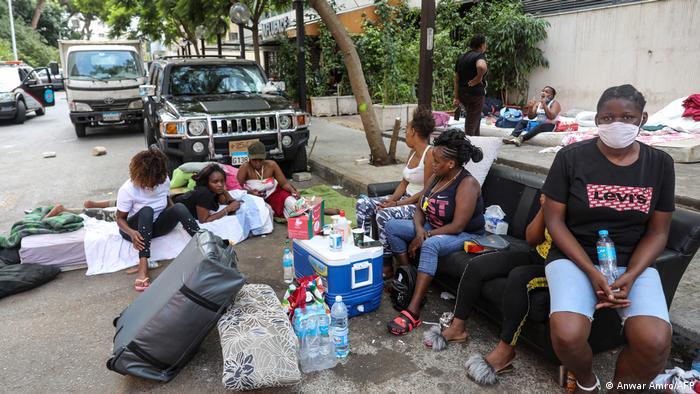 As the economic situation in Lebanon deteriorated in recent years, Lebanese sponsors of migrant domestic workers were no longer able to support them. As a result, many of these workers were simply abandoned by their employers outside the embassies and consulates of their home countries. Pictured here: migrant workers abandoned by their employers outside the Nigerian Consulate in Beirut

Arabic expressions and figures of speech reveal other regional and local racist phenomena in Arab countries. For example, they denigrate Bedouins, women and Kurds in comparison with Arab men. They also disparage people based on their faith, sexual orientation or disability. The list is long.

Tentative progress is being made, however. Tunisia is the first Arab country to have passed an anti-racism law. An intense discussion about racism emerged there after the 2011 revolution. It resulted from a vibrant civil society making use of the freedom of expression. In October 2018, the Tunisian Parliament passed a law that defined racism and made racist statements and deeds punishable by law.

Passing a law, however, is not enough. Khawla Ksiksi, the co-founder of "The Voices of Tunisian Black Women", says the law only exists on paper, since victims of discrimination and racist attacks don't have the means to take lengthy and costly legal action against perpetrators. According to her, there is still not enough political will to implement the national strategy that the law envisions. Ksiksi is a lawyer and says she dreams of seeing pictures of Black children in textbooks and Black Tunisians assume top posts in the government and the courts.

Home
Print
Newsletter
More on this topic
The iniquity of the kafala system: Lebanon's migrant workers – exploited, then abandonedBlack Lives Matter in Egypt: The controversy surrounding racism – are Arabs racist?Human rights and civil society in North Africa: Tunisia joins George Floyd protests to say "no" to racismHuman rights in Lebanon: Kafala and its "commodities"
Related Topics
Arab world, Democracy and civil society, History of the Near and Middle East, Human rights, Humanitarian aid, Migration, Policy on refugees and migration, Racism | discrimination, Rule of law, Slavery, Women in the Islamic world
All Topics

Since President Abdul Fattah al-Sisi seized power in Egypt in 2013, he has ruled the country with an iron fist. Civil society, opposition and free press struggle to survive. Tens ... END_OF_DOCUMENT_TOKEN_TO_BE_REPLACED

The lack of grain supplies from Ukraine is forcing Egypt to act. Now even the Toshka project is being revived to grow grain in the desert. Birgit Svensson travelled to see it END_OF_DOCUMENT_TOKEN_TO_BE_REPLACED

In this unusually beautiful book of images and text, published in German and Arabic, artist Marianne Manda presents her own unique take on the megacity of Cairo. In over fifty ... END_OF_DOCUMENT_TOKEN_TO_BE_REPLACED

A stage, lights, a mesmerised audience: it looks like an Egyptian folkloric concert, but Umm Sameh is singing to heal the sick by driving out the demons that possess them END_OF_DOCUMENT_TOKEN_TO_BE_REPLACED
Author:
Mona Naggar
Date:
Mail:
Send via mail

END_OF_DOCUMENT_TOKEN_TO_BE_REPLACED
Social media
and networks
Subscribe to our
newsletter