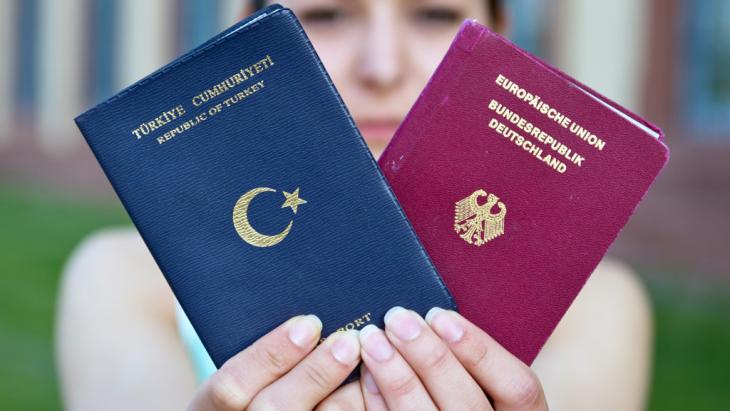 The fight against dual citizenship is an assault on the reality of life in Germany. While it is true to say that those who want to assume German citizenship have to decide, they are not deciding whether to feel a little bit more Turkish or a little bit more German; they are deciding in favour of democracy, a state governed by the rule of law and the basic principles on which the constitution is built. A commentary by Heribert Prantl

The Bible tells us that "no one can serve two masters". This is a sentence that staunch opponents of dual citizenship in Germany's conservative "Union parties" (CDU and CSU) love to quote in the context of the debate on dual citizenship. It is not a good argument for a number of reasons. Firstly, a citizen of a democratic state is not a servant. Secondly, everyone knows that people who have two jobs are not torn apart by the fact that they have two bosses.

Quite apart from that, the sentence they quote means something entirely different, namely that one cannot serve God and Mammon at the same time. It is about not being stingy. This is what makes it all the more incomprehensible that members of the Union parties are once again demonstrating such stinginess when it comes to discussing citizenship in their coalition negotiations with the Social Democrats and still acting as if having two citizenships simultaneously is a fundamental evil.

Dual citizenship means that citizens who are at home in two cultures are no longer required to tear themselves in two. It takes citizens the way they are: with their backgrounds, their traditions, their roots and the identity that results from all this. 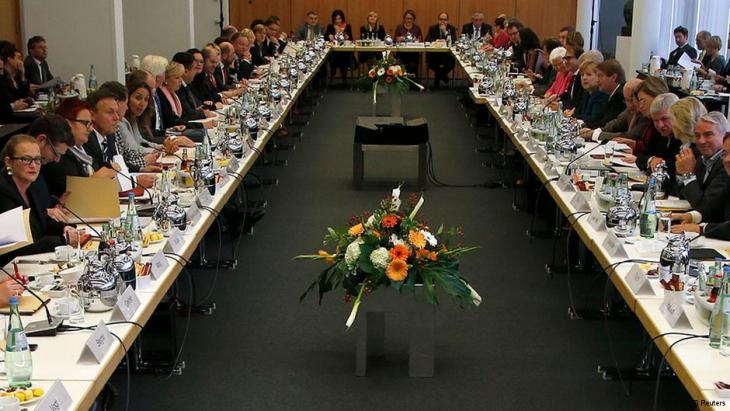 The conservatives of the CDU and CSU parties and the Social Democrats of the SPD are currently in negotiations to form a government. The two sides differ greatly on the issue of dual citizenship. The SPD would like to abolish the so-called "option model" once and for all; the CDU, however, is not willing to play ball

Certainly, new citizens have to decide, but not whether they now feel a little more Turkish or a little more German; they have to decide in favour of democracy, a state governed by the rule of law and the basic principles on which the constitution is built. Dual citizenship can be a help in this respect.

EU citizens, ethnic Germans who have resettled in Germany after 1993 and the children of dual-nationality marriages are getting along just fine in Germany with dual citizenship; why should it be any different for German-Turks? One cannot decide on the basis of origin whether a person may have one passport or two.

The 1999 reform introduced the obscure "option model" that obliges people to choose: children born to foreign parents in Germany are initially granted two citizenships, but have to decide in favour of either German citizenship or the citizenship of their parents by the time they are 23.

Even when it was introduced in 1999, this model wasn't the wisest of solutions; it was a stopgap measure taken by the coalition of Social Democrats and Greens in order to ensure a majority for at least a minor reform in the wake of the outright opposition of the conservatives who had recently won the state parliamentary election in the state of Hesse. Since then, what was expected at the time has now come to pass: the "option model" is damaging integration and causing legal uncertainty.

The Expert Council on Integration has now made a proposal that the Union parties would do well to accept: dual citizenship should be granted to the transition generation. That would be a wise compromise. And surely Angela Merkel can have nothing against wisdom.

Prof. Dr. Heribert Prantl is a member of the senior editorial team at the German daily newspaper Süddeutsche Zeitung and editor in chief of the paper's domestic policy section.

Algeria‘s regime is again cracking down on anti-fracking activists and the unemployed in the country‘s south. Yet EU countries remain keen to scale up their energy cooperation ... END_OF_DOCUMENT_TOKEN_TO_BE_REPLACED

Bachtyar Ali sends the hero of his latest novel – "Mein Onkel den der Wind mitnahm" – literally flying. Jamshid is so thin after his years as a political prisoner that a gust of ... END_OF_DOCUMENT_TOKEN_TO_BE_REPLACED

For a century, the Kurds and other minorities in Turkey have been subject to state repression. With his dissertation "The Kurdish Question in Turkey", political analyst Ismail ... END_OF_DOCUMENT_TOKEN_TO_BE_REPLACED

Anti-Semitic motifs have no place at Germany’s documenta art show or anywhere else in the world, stresses Meron Mendel, director of the Anne Frank Educational Centre in Frankfurt ... END_OF_DOCUMENT_TOKEN_TO_BE_REPLACED

A new exhibition, "Syria – Against Forgetting", at Cologne’s Rautenstrauch-Joest-Museum focuses on Syria's artistic and cultural heritage and pays tribute to the country before ... END_OF_DOCUMENT_TOKEN_TO_BE_REPLACED

Madrid's about-face on the Western Sahara conflict has enraged Algeria. Trade relations have been frozen unilaterally and a cut in gas supplies to Europe could be in the pipeline ... END_OF_DOCUMENT_TOKEN_TO_BE_REPLACED

Comments for this article: Why the Obligation to Choose is Damaging Integration

Turkish German's having passports in Germany.

Turkish German women and men have always had a difficult decision to make when to be loyal to Germany or Turkey because they have been brought up in Germany, and they find it tough to balance Turkish and German way of life. The German Turkish community have always had struggle to find their true identity, because Germany used to treat German Turkish as second class citizen's if they did not speak German and tried to be apart of their society during the seventies and eighties when they brought Turkish people to work in their country. A lot of Turkish German children begin to feel isolated in society, and there was a lot of mental and physical abuse in the German Turkish community from family honor killings if the daughter married a European man or she would be verbal abused by their family and also feel like a stranger to her family and community as well. Now that times are changing in Germany many German Turkish citizens would love to have a choice to be a full German citizen with able rights to have a passport to Germany and receive the same right's as ordinary German citizen should. Being a European who has dated a German Turkish woman I have come to learn first hand about the German Turkish community, and how we should learn to understand their culture and work with them to ensure they have the same right's to have a freedom of choice when it comes to getting a passport to Germany and being able to get educated and have a great job in Germany to support their family's and to feel they are making a difference in German society and being a productive citizen instead of an outsider and treated like a second class citizen. As Europeans we know that everyone has the right to live a life free from religious or culture hatred, also Turkish German's should have the right like Americans or Europeans to be feel apart of their country no matter where they are born or grew up in. Without understanding the German Turkish community in Germany, will German Turkish community ever feel proud about their native homeland in Germany or will they remain disconnected and treated like second class citizens for us to read about in culture magazines for years to come.

END_OF_DOCUMENT_TOKEN_TO_BE_REPLACED
Social media
and networks
Subscribe to our
newsletter