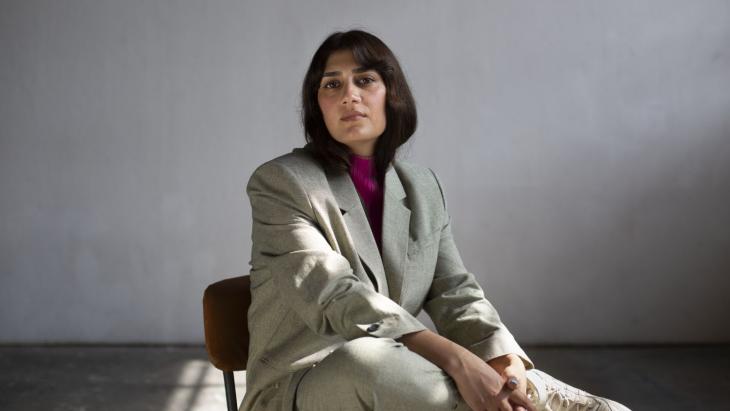 Djinns, migration and racism
"You don't have to be Huseyin or Emine to understand"

Columnist and editor Fatma Aydemir is one of the most scintillating voices in new German literature. In her latest novel, "Djinns", she tells a migrant family story from six different perspectives. Interview by Schayan Riaz

Ms Aydemir, when your new novel "Djinns" was initially announced, social media was flooded with funny comments about the supposedly scary title. What did you think of that?

Fatma Aydemir: Once I knew I would call the book "Djinns", I didn't even think about people’s reactions. But I too found the title a bit spooky. It does something to you when you deal with the theme of djinns night after night. Then again, my novel really isn’t a ghost story. The comments were funny, especially the many nazar (‘evil eye’) emojis beneath my posts.

In Turkish, people try not to utter the word at all, which is a nice motif, because my story is also about things that are unspoken, that remain hidden. At the same time, it was important to me to write this word and break with the fear, which has a lot to do with ignorance and superstition. Djinns are not fundamentally evil. But people are always afraid of what they cannot see themselves.

Aydemir: At first I only had the chapter about Huseyin, the head of the family. While I was asking myself who this character was and how I wanted to continue telling the story, I came up with the idea of going through the family chapter by chapter and giving each member their own perspective. That then became the structure. During the writing process, I realised that it wasn't that easy, because the characters had different relationships to each other, and it became more and more complicated. I then put everything aside and imagined the whole thing like a wall made of bricks. There were gaps in this wall that I had forgotten to fill. So I went back to those parts of the text and threw things out. I re-wrote everything that was crooked. 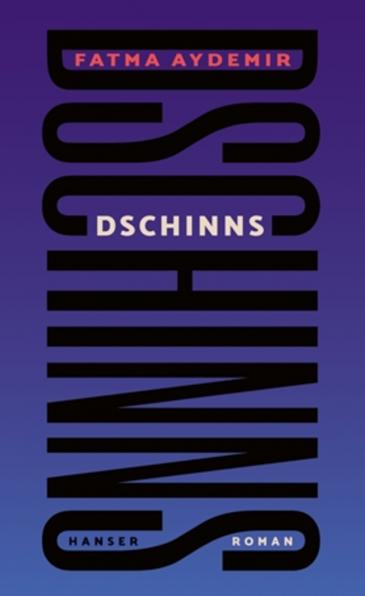 In "Djinns" Fatma Aydemir tells the story of Huseyin, his wife Emine and their four children. Huseyin dies of a heart attack when he enters his apartment in Istanbul for the first time. At the funeral, the family comes together and reflects on the past. In the process, each of these six characters brings their own perspective to the story of a migrant family in three generations. A good novel is universal, Aydemir says. "It is also important to me that my writing appeals to as many people as possible. You don't have to be called Huseyin or Emine to understand the concerns of these characters"

A novel is not a political statement

A few years ago you published the anthology "Your Homeland is Our Nightmare" with Hengameh Yaghoobifarah and the title still works as a statement. The image of Germany in "Djinns" is also rather bleak, something that German-language critics will likely pick up on. Does that bother you?

Aydemir: I don't mind when the anthology "Your Homeland is Our Nightmare" is mentioned in reviews and at events, or even quoted from my old columns. But sometimes all that is read into the novel, which tells a completely different story. A fictional one at that. It annoys me when everything gets mixed up and my novel is only read under this one aspect. "Germany" per se or "the Germans" don't play such a big role in "Djinns". Migration, on the other hand, does.

But I think it's strange when people focus solely on the image of Germany, or count how many German characters appear in a story and how well or badly they come off. What kind of approach is that to literature? I think that says more about the people, than about my work.

Maybe it has something to do with the fact that the majority of critics are white? How does a non-white person move in the literary world? You are also an editor with the taz newspaper. How do you work with white colleagues, editors, especially when you tell stories from a non-white perspective?

Aydemir: A good novel works universally. It shouldn't matter where you come from, what social background an author has. If it touches you, you will always find a way in. My editor is a white cis-hetero man, I had already worked with him on my debut novel "Elbow". He's insanely good because he has a good eye and gets involved with texts. It also helps to have someone at your side who is far removed from your own reality, because he asks questions when editing that I would never have thought of myself. It is also important to me that my writing appeals to as many people as possible. You don't have to be called Huseyin or Emine to understand the concerns of these characters.

So you don't write for a specific readership?

Aydemir: I am my own first reader. That's the only thing I can do. I write what I would like to read myself and I think I can reach quite a diverse readership with that. I spoke to a bookseller from Franconia who recognised her own mother in Emine, the mother figure in the novel. And then there are readers who ask me, puzzled, whether Turkish and Kurdish families are really so strictly patriarchal or queer-hostile. Yet you only have to look at Germany’s top opinion-makers to see what a state the country’s emancipatory discourse is in.

All the characters are haunted by inner demons

Your novel examines many different themes. Reviewers have complained that it is too ambitious. Is that fair?

Aydemir: It is not unusual for a novel to deal with many themes. Every historical novel does that. And yes, I too asked myself whether it might be too much. But when you tell a story from six different perspectives, there are a lot of aspects to it. Maybe I just have a tendency to overload. I like stories that have a hundred other stories hidden in them.

I would like to ask another question about Emine. In "Djinns" there is a brief moment when the devout mother doubts her faith. Why was that important to you towards the end of the novel? Did you deliberately portray the older generation as more religious than the younger generation?

Aydemir: I am surrounded by many religious people, I wouldn't call myself religious, but I don't fundamentally reject it either. I find it interesting to observe people of faith and to talk to them. And I am convinced that religious people always struggle with their faith. You can't live your whole life according to one thing and never doubt it.

I myself don't act according to religious principles, but of course there are ethical and political values that are important to me. And these also change over time because I question them and have to renegotiate them for myself because I make mistakes. The character Emine also has to re-negotiate many things for herself. That's why it was important to me to make Emine's break perceptible. In the end, it is the rupture that makes her come alive.

You write about a racially motivated arson attack and about racial profiling. In addition, the book was published on the second anniversary of the Hanau attack – have we made any progress at all on the topic of racism or right-wing extremism in Germany in all these years?

Aydemir: I think the biggest progress is that these issues have much more space in the mainstream than they did twenty or thirty years ago. Anti-racist discourse is much more accessible today. That has a lot to do with social media, but also with a changing media industry. I can take up these issues in my taz column, my parents couldn't do that. Or I can talk about racial profiling or arson attacks in my novel. Of course, this still meets with resistance today, especially criticism of police violence. Incidentally, Hakan, whose chapter is about a violent encounter with the police, is the character most readers find disturbing. I wonder if this is a coincidence.

Armin Kurtovic, the father of Hanau victim Hamza Kurtovic, said he only understood what racist police checks can do to a young person after his son's death.

Aydemir: That is very sad. But sometimes it is also one's own parents who talk down experiences of racism or don't want to hear about them because they have no place in their self-image and their view of the world. In "Djinns" it is similar between Hakan and his father Huseyin. The father doesn't want to hear how his son has been the victim of an assault because it shows him his own powerlessness.

I think the strength of the younger generations is that we talk more about racism. We know that our struggles are not just individual problems, but collective struggles. We are no longer alone in this.

Home
Print
Newsletter
More on this topic
Muslims in the West: Can democracy tolerate Muslims at all?0 years German-Turkish Recruitment Agreement: German-Turks take the arts by stormDaughters and Sons of Gastarbeiters writers′ collective: "When I go to Germany, I will buy a red tractor"
Related Topics
Book reviews, Gender, Immigration, Islam in Europe, Islam in Germany, Literature, Migration, Migration in Germany, Muslim women, Muslims in the West
All Topics

A French artist has used photos of torture from Abu Ghraib for an oversized artwork at the Berlin Biennale. Reactions from fellow artists have been mixed, with some criticising ... END_OF_DOCUMENT_TOKEN_TO_BE_REPLACED

Since Ali Khamenei, Iran's most powerful man, has openly and unconditionally come out in support of Putin's war in Ukraine, logistical help is on its way, with an allegedly ... END_OF_DOCUMENT_TOKEN_TO_BE_REPLACED

It is possible to write about the Holocaust and the crimes of colonial powers without downplaying anything. In her latest book, Charlotte Wiedemann focuses on the numerous blind ... END_OF_DOCUMENT_TOKEN_TO_BE_REPLACED

This year Annemarie Schimmel, the great German scholar of Islamic studies, would have turned 100. Unique within the German and international academic community of her time, ... END_OF_DOCUMENT_TOKEN_TO_BE_REPLACED

The highly controversial Indian blockbuster "The Kashmir Files“, on the exodus of Kashmiri Hindus in the 1990s, is characterised by unilateral representations, negative ... END_OF_DOCUMENT_TOKEN_TO_BE_REPLACED

END_OF_DOCUMENT_TOKEN_TO_BE_REPLACED
Social media
and networks
Subscribe to our
newsletter