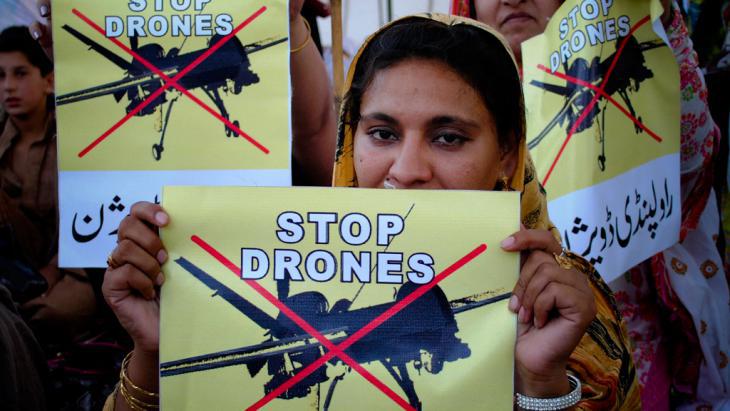 While the world is spellbound by the atrocities perpetrated by the organisation "Islamic State" in Iraq and Syria, the killing in another region of the world goes on unremarked. The daily lives of people in Afghanistan and Pakistan are affected less by the murders committed by bearded extremists than by unmanned killing machines. By Emran Feroz

Last year a bomb dropped by an American drone hit the Rashid family's pick-up truck in the eastern Afghan province of Kunar. Fourteen occupants, most of them women and children, were killed in the attack. Only four-year-old Aisha survived, losing a hand and sustaining severe injuries to her lower body, while nothing at all was left of her nose or eyes.

When Aisha's relatives learned of the attack, they rushed to the site – and found her there. A nearby hospital in Asadabad could however not do much for her. Aisha had lost not only her family, but also her face. At the time, NATO announced that only Taliban militants had been killed in the drone attack in Kunar. No mention was made of Aisha or her family.

NATO's statement came as no surprise. "Civilian casualties in remote areas of Afghanistan are not uncommonly described by the occupying forces as Taliban fighters. Incidents are often quickly forgotten," says the Afghan journalist and political analyst Waheed Mozhdah.

Ismael Zadran, an Afghan living in Germany, had to find this out the hard way. A few years ago his cousin Sadiq Rahim Jan, 21 years old at the time, was killed by a drone in the Afghan province of Paktia. Not only NATO, but also some Afghan mainstream media reported only a slain Taliban commander. 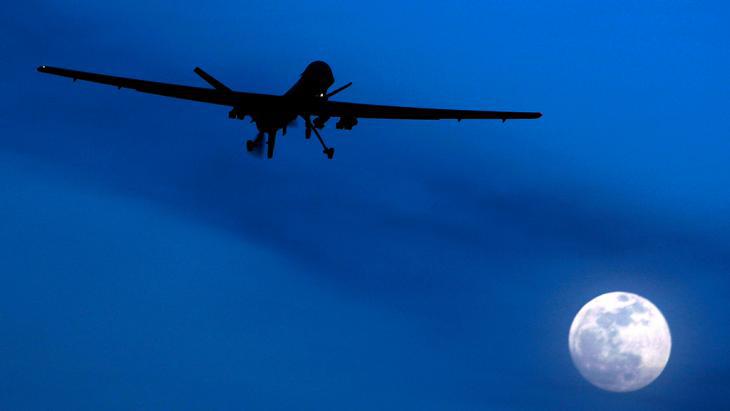 Death comes out of nowhere: According to research by the NDR and WDR stations and the "Süddeutsche Zeitung" newspaper, the USA uses a satellite relay station on the US base in Ramstein for its drone attacks. In its fight against terrorism suspects in Pakistan, Afghanistan and Yemen, the USA has for the past several years deployed drones for targeted killings, according to the media.

A similar incident was exposed by the American journalist Jeremy Scahill and others. Several civilians were killed by US soldiers in the attack, which also took place in Paktia. Only after journalists reported on the incident did NATO acknowledge that the dead had not been Taliban fighters.

Sad symbol of the US drone war

But back to Aisha. During her stay at a Kabul hospital, the little girl received a visit from ex-President Hamid Karzai. In a later interview, the former Afghan President described how he shed tears upon meeting the faceless girl. Karzai reported that Aisha would apparently soon be taken to the US for treatment.

In the meantime, Aisha is no longer in Afghanistan. Her family, who had been taking care of her since the attack, did not know at first where the girl had been taken. Nor did they give their consent for Aisha to be treated in the US. The family – above all Aisha's uncle – believes to this day that the girl was taken away intentionally to get her out of the public spotlight. The girl without a face might after all have become a sad symbol for the illegal US drone war.

The renowned "Bureau of Investigative Journalism" (TBIJ), based in London, recently came to the conclusion that Afghanistan is the target of more drone bombings than any other country in the world. This fact is rarely mentioned, as most people associate the drone war with countries such as Somalia, Yemen or Pakistan.

The Pashtun tribal areas between Afghanistan and Pakistan, as well as the region of Waziristan, are currently the main theatre of the drone war. The local Pashtuns there call the unmanned killing machines "angels of death".

People's daily lives are dictated by the drones. Little children only play outdoors on overcast days. This is because the "angels of death" usually show up under clear blue skies. In good weather the drone pilot, sitting perhaps somewhere in Langley, Washington D.C., or in Ramstein, Germany, has the best view for killing. 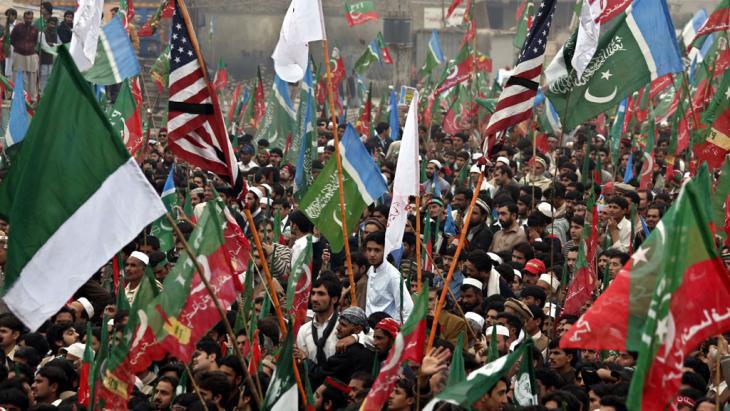 Protest against uncontrolled drone warfare: Supporters of Imran Khan's Tehrik-e-Insaf (PTI) Party held a demonstration on 23 November 2013. The PTI and the provincial government view the raids by the unmanned, remote-controlled missiles as a gross violation of Pakistan's sovereignty.

The film "DRONE" by the Norwegian documentary filmmaker Tonje Schei depicts everyday life in Waziristan. "During our work on location, we really understood for the first time the climate of fear in which the people there are living," recounts Schei. "The entire population is traumatized."

A boy who decided he would no longer put up with this daily menace was 16-year-old Tariq Aziz from Waziristan. Like any youngster his age, Tariq liked to play football and engage in other regular leisure pursuits. The only difference: Tariq spoke out openly against the American drone attacks and actively participated in demonstrations against the drone war, for example in a nationwide protest march called by the popular Pakistani politician Imran Khan. An event that took place shortly before Tariq's death.

In November 2011 the investigative journalist Pratap Chatterjee, who works for organisations such as the TBIJ, met with Tariq 72 hours prior to his murder. He accompanied the young activist to a council meeting of the "Loya Jirga", at which Waziristan's tribal elders convened. The main issue addressed at the meeting was the drone attacks. By then more than 2,300 people in the Afghanistan-Pakistan border zone had been killed by bombs dropped by the "angels of death".

Tariq and his 12-year-old cousin Waheed were on the way to Miranshah to pick up an aunt from her wedding when their car was hit by a drone. The two children were dead on the spot. The number of children killed by drones thus rose from 173 to 175. Today, in 2014, well over 2,500 people are thought to have been killed by drones in Waziristan alone. And this number doesn't even include the casualties in Afghanistan, Somalia and Yemen, which still remain unknown.

Journalists have very limited possibilities for investigating the subject of drones, particularly as very few are present on the ground in affected regions. The TBIJ is one of the few organisations that works in Waziristan and other tribal areas and conducts regular research. Recently, TBIJ journalists came to the conclusion that only 12 per cent of all drone victims in Pakistan and Afghanistan were extremist fighters, while only four per cent of all victims could be described as members of Al Qaeda and associates.

"The facts and figures, including the fact that children like Tariq are regularly killed by the US drones, call into question the whole of White House policy in this area," says the journalist Murtaza Hussein, who works for the investigative platform "The Intercept". "Barack Obama once said that 'dozens of Al Qaeda members' had been eliminated by drones in this region. He probably meant that quite literally," adds Hussein.

Every Tuesday, Barack Obama personally approves the names of those to be targeted in the next round of drone attacks. The secret "kill list" is getting longer and longer. Murder by signature has become routine for the Nobel Peace Prize laureate and family man.

The whole thing seems even more macabre considering how Obama supposedly joked once with regard to his drone policy: "I'm really good at killing people". One wonders whether he would say this to Aisha's face.

Very different Western reactions to the suffering in Ukraine and the Arab world show that there is a profound rift among cultures. Essay by Michael Young END_OF_DOCUMENT_TOKEN_TO_BE_REPLACED

The documentary "Nadia" tells the incredible story of Nadia Nadim, who was forced to flee from the Taliban as a child and became a football star. By Annabelle Steffes-Halmer END_OF_DOCUMENT_TOKEN_TO_BE_REPLACED

Three award-winning female directors appeal to the international film industry to save Afghan cinema. Supporting women filmmakers is more important than ever. By Christine Lehnen END_OF_DOCUMENT_TOKEN_TO_BE_REPLACED

Russia's ranking on the World Press Freedom Index has fallen again over the Kremlin's wartime censorship of the Ukraine conflict. From Myanmar to Mexico, journalists continue to ... END_OF_DOCUMENT_TOKEN_TO_BE_REPLACED

Ideally, those Europeans currently welcoming Ukrainian refugees would show the same sympathy to Syrians, Afghans and others fleeing war beyond the continent. But, argues Ian ... END_OF_DOCUMENT_TOKEN_TO_BE_REPLACED

Comments for this article: Living in the shadow of the "angels of death"

As an American and a veteran I just want to say that I am so sorry. Since leaving the military I have become a peace activist but most Americans choose to remain completely ignorant about the wars our government creates and the worldwide atrocities we commit.

END_OF_DOCUMENT_TOKEN_TO_BE_REPLACED
Social media
and networks
Subscribe to our
newsletter