A team of investigative journalists involving the Deutsche Welle have discovered that German weaponry and tech play a far greater role in the Yemen conflict than previously thought. Meanwhile the German government continues to feign ignorance. By Nina Werkhauser and Naomi Conrad

The "world of war", as one observer put it, was on display in Abu Dhabi this February. At IDEX 2019, the Middle East's biggest defence fair, more than 1,200 companies showed off their latest state-of-the-art defence technology. Many of the stands were manned by representatives of German arms manufacturers.

This year the host, the United Arab Emirates, awarded military procurement contracts worth more than $5 billion (€4.4 billion) to national and international companies, including American and European arms manufacturers.

The Emirates have long been one of Germany's top clients when it comes to arms and defence technology. But since 2015, its military has been one of the major parties at war in one of the world's most deadly conflicts: the war in Yemen. The UN has termed it the worst humanitarian conflict of our times; millions have been pushed to the brink of starvation and thousands killed.

Government 'not aware' of German arms in Yemen

Until now, the German government has repeatedly denied having any knowledge of German weapons and technology employed in Yemen by Saudi Arabia and the Emirates.

Only recently, at this year's Munich Security Conference, German Economy Minister Peter Altmaier repeated that he was not aware of arms exported from Germany in the conflict. "I have not had any news about it so far,” he said.

The result: conclusive proof of German-made arms and technology in Yemen – in the air, at sea and on land, despite German arms guidelines that expressly forbid exports to countries involved in armed conflicts, unless they are acting in self-defence. 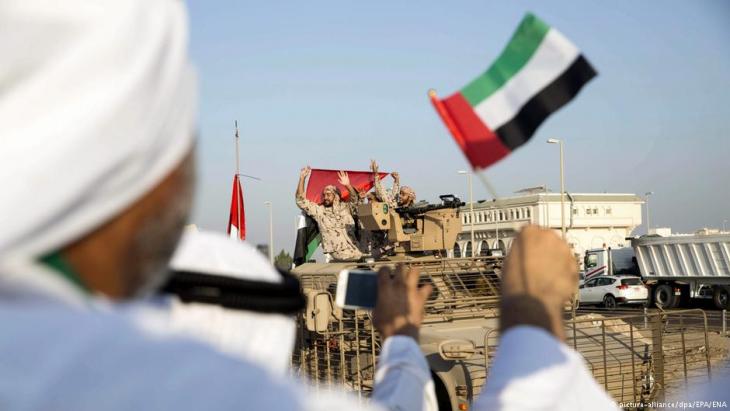 Official line wearing thin: recently, at this year's Munich Security Conference, German Economy Minister Peter Altmaier repeated that he was not aware of arms exported from Germany in the conflict. "I have not had any news about it so far." Yet, according to a leaked internal strategy paper, Germany is working to loosen its arms export control rules to make it easier to continue with joint weapons projects with France

In one news report the team viewed, a convoy of pickup trucks trundles along a tarmac road. In the distance, a rugged mountain range looms on the horizon. As they drive past the camera, the soldiers in the back wave and one man holds a flag aloft, while several others flash a victory sign.

They are Sudanese mercenaries, recently disembarked close to the Yemeni port of Aden, heading north to join the fray on the side of the Emiratis in late 2015 – a claim that is corroborated by other international news reports from around the same time.

One bulky vehicle stands out among the convoy of pickups: It is an American-built Oshkosh, an armoured all-terrain vehicle mounted with a conspicuous weapons station: the Fewas, built by Dynamit Nobel Defence, a company based in the western German municipality of Burbach. The Fewas, according to the firm's website, allows for the "convenience” of automatic target tracking, meaning that once the operator sets a target, the weapons station automatically pursues it.

In 2009, the German government approved the export of Dynamit Nobel weapons stations and spare parts worth €81 million to the UAE.

Trawl footage and photos of Emirati forces operating in southern Yemen and the Oshkosh is a common sight, many of them equipped with Fewas weapons stations. DW and its research partners compared satellite images with video footage and news reports. The team was able to identify the exact location of several Oshkoshs carrying Fewas stations.

The most recent example was a video uploaded by the news channel Arab 24 in late 2018, which the team located as having been shot in Al Khawkhah on the Yemeni coast. The team also came across howitzers with German-made chassis and motors firing at Houthi territory from across the Saudi border. 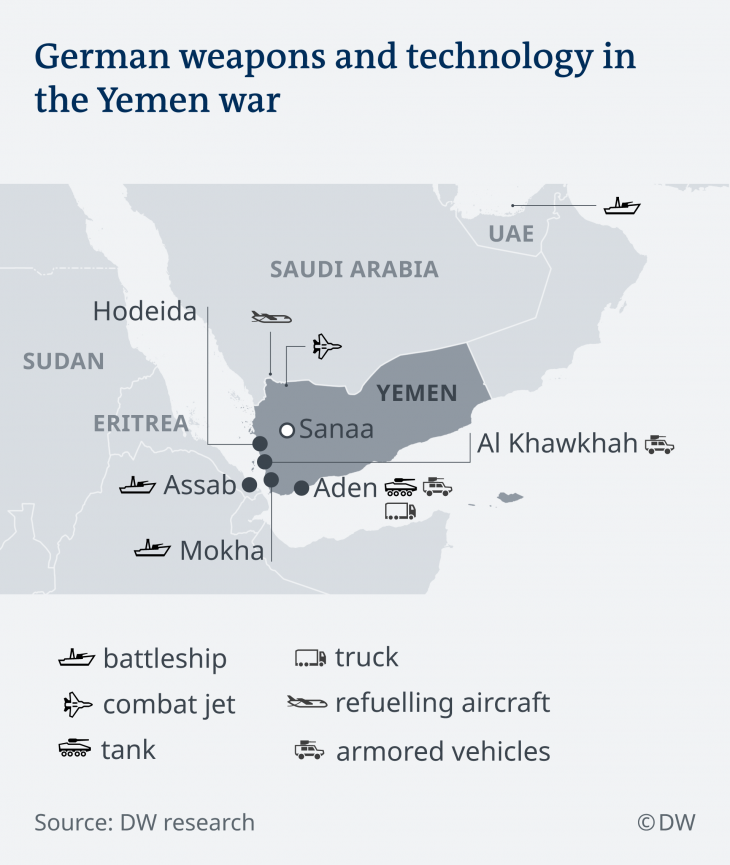 Germany prides itself as having one of the most restrictive arms export controls. Buyers have to sign an end-user agreement in which they pledge not to sell the weapons or pass them on to any other group or country.

On top of that, the governing coalition under Chancellor Angela Merkel signed a coalition agreement in early 2018 that explicitly forbids the approval of weapons exports to any country "directly" involved in the war in Yemen.

Nevertheless, exports to both Saudi Arabia and the Emirates continued to be approved. In the first nine months of 2018, the Bundessicherheitsrat – the security council consisting of the chancellor and her chief ministers, who meet in secret to approve weapons sales – signed off on exports worth roughly €416 million to Saudi Arabia.

From October to December 2018, Germany also approved exports worth more than €40 million to the Emirates.

So why has the German government apparently ignored its own guidelines, even as thousands of civilians have been killed in Yemen?

Saudi Arabia and the UAE are both considered strategic partners. "The United Arab Emirates play an important role in the Arabian Peninsula in the international community's efforts to restore stability" in the region, the German Foreign Office told DW and its partners. 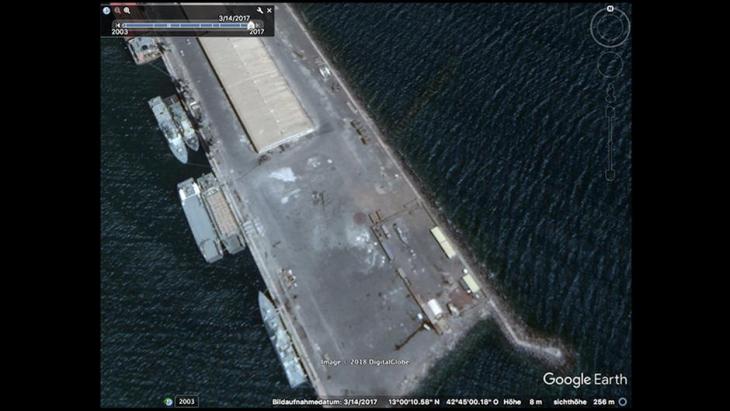 German weapons play a far greater role in the Yemen war than previously thought: research by the investigative project #GermanArms reveals that the coalition armed forces, led by Saudi Arabia and the United Arab Emirates, use German armament technology for sea, land and air missions

This explains why it took the public outcry surrounding the murder of prominent Saudi journalist Jamal Khashoggi in the Saudi consulate in Istanbul for the German government to temporarily halt all military exports to Riyadh, despite Saudi Arabia's involvement in the Yemen conflict.

The war has pitted the Houthis, who are believed to be supported by Iran, against a Saudi-led coalition backing the former Yemeni government, currently in exile in Riyadh.

Two refugees detained in Egypt are facing deportation to Eritrea. The expulsion of the Eritreans, who have been incarcerated in Cairo for more than eight years, has been halted ... END_OF_DOCUMENT_TOKEN_TO_BE_REPLACED

Blending East African, Bollywood and Arab music traditions, Groupe RTD's "The Dancing Devils of Djibouti" is not only a stunning album, it is also the first internationally- ... END_OF_DOCUMENT_TOKEN_TO_BE_REPLACED

Ethiopia and Eritrea didn't pen their peace agreement in Addis Ababa or Asmara, but in Saudi Arabia with the Emirates alongside. Are economic and military interests increasingly ... END_OF_DOCUMENT_TOKEN_TO_BE_REPLACED

How do authoritarian regimes respond to EU initiatives to stem migration? A recent publication by the German Institute for International and Security Affairs (SWP – Stiftung ... END_OF_DOCUMENT_TOKEN_TO_BE_REPLACED

The EU claims that the migration pact with Africa is a completely new initiative. Rather than reshaping patterns of migration, however, Europe′s desperate politics of symbolism ... END_OF_DOCUMENT_TOKEN_TO_BE_REPLACED

Comments for this article: German arms feeding the Yemen conflict

Is this separate from the so-called "liberal democracy" or part of it?

END_OF_DOCUMENT_TOKEN_TO_BE_REPLACED
Social media
and networks
Subscribe to our
newsletter