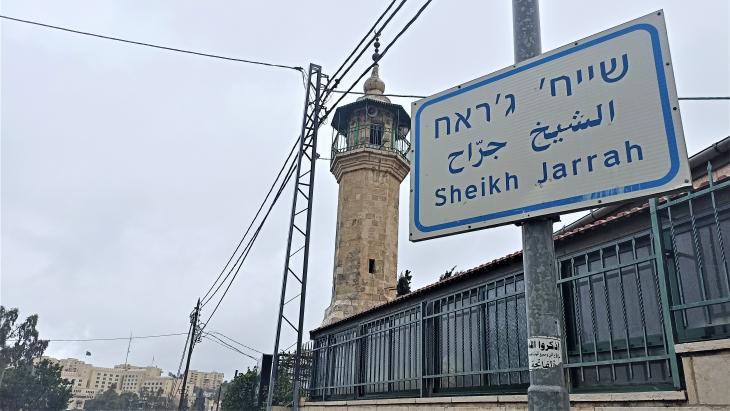 A surprise ruling by Israel’s Supreme Court earlier this month produced a rare sigh of relief from Palestinians in Sheikh Jarrah, but the struggle isn’t over. Reporting from Jerusalem, Noam Yatsiv describes the implications of the recent ruling and where things could go from here

The small residential neighbourhood of Sheikh Jarrah in East Jerusalem has in recent years become a focal point of tension, making global headlines. The struggle of Palestinian families under threat of displacement took centre-stage on social media last year, with many celebrities joining the viral #SaveSheikhJarrah campaign. But what has actually been going on there?

In recent decades, several right-wing Israeli NGOs have been working to gain ownership over properties within several Palestinian neighbourhoods in East Jerusalem. Nationalist-religious ideologues are not only drawn to the many ancient Jewish sites over the Green Line but also seek to push Palestinians away from these areas and "assert sovereignty" over them.

In the Palestinian neighbourhood of Silwan, they are drawn to Iron Age relics of Judea’s ancient capital. In Sheikh Jarrah there is an ancient burial cave that has been venerated by local Jews as the tomb of Simon the Righteous, a High Priest in the Second Temple, since the Middle Ages. In the 1870s, Jewish communities purchased adjacent land plots and later built houses on some of them.

The NGOs operate via shadowy financial channels and buy assets via straw-sellers, but they use other means as well. In Silwan and Sheikh Jarrah, for example, they claim Jewish-owned lands that were lost in the 1948 war and on which Palestinians currently live. After locating the Jewish heirs to these properties, they acquire the legal rights from them and turn to the courts, demanding their ownership be realised. In practice, this means evicting Palestinians and replacing them with ultra-nationalist settlers. This has already happened to five families in Sheikh Jarrah over the last twenty years and could potentially happen to several more.

The neighbourhood became a hotbed of violence about a year ago, when MK Itamar Ben-Gvir, a far-right extremist and serial provocateur, set up a makeshift "bureau" on the street. This led to clashes that eventually merged with May 2021’s wave of violence. This month he re-erected his "bureau", with fellow oppositionists from Netanyahu’s Likud party also paying it a visit in a reckless stunt intended to destabilise the Bennett-Lapid unity government. 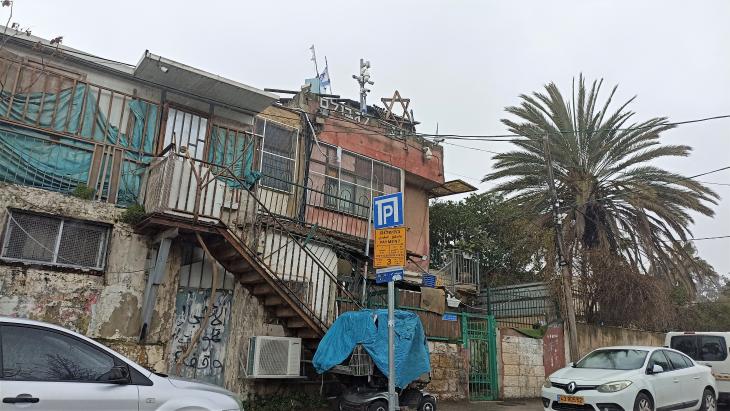 A milestone ruling: all eviction notices served on Palestinian families have been frozen. Sami Arshed, an attorney representing the families, described it to as an “incredible legal triumph”. The dramatic ruling 'rolls the ball' on to the Ministry of Justice, where lawyers will now have to weigh the competing claims. The court has ordered the Palestinian families to deposit a symbolic monthly payment equivalent to 56 euros into a neutral fund, without making them recognise Jewish ownership of their homes. The money will be given to the NGOs if – and only if – the Ministry of Justice’s research deems their ownership claims prevail

Given the explosive nature of the situation, it would be fair to assume that even a right-wing politician like PM Bennett would prefer Sheikh Jarrah just to stay calm, even if this means giving up on a growing Jewish settlement within it. After all, it is neither the Western Wall nor the ancient Jewish cemetery on the Mount of Olives, both of which are located in East Jerusalem. Unlike those sites, the average Israeli simply doesn’t care about Sheikh Jarrah.

A ruling that could be a watershed

In August 2021 the Supreme Court put forward a compromise that would prevent further eviction of families. It suggested that Palestinian families should remain "protected tenants", meaning eviction would not be possible for several decades. In the meantime, they would have to pay a symbolic low rent to the legally registered owner, which is the NGO. Both sides rejected the proposal.

Palestinian families appealed to the Supreme Court once more, with newly acquired documents proving that Jordan was in the process of endowing them rights to the properties when the Six-Day War broke out. Earlier this month the court ruled that this was a valid reason to freeze all eviction notices. Activists and MKs heralded the rare, milestone ruling. Sami Arshed, an attorney representing the families, described it to Haaretz as an “incredible legal triumph”. He said: "The judges accepted our main argument, which is that the question of ownership has yet to be determined."

The dramatic ruling 'rolls the ball' on to the Ministry of Justice, where lawyers will now have to weigh these claims against each other – a process likely to take months, if not years. The court has ordered the families to deposit a symbolic monthly payment equivalent to 56 euros into a neutral fund, without making them recognise Jewish ownership of their homes. The money will be given to the NGOs if – and only if – the Ministry of Justice’s research deems their ownership claims prevail.

"This eases tensions in the neighbourhood and gives the families certainty, which is important," says Gaby Lasky, a prominent human rights attorney, activist and, since last year, a member of Knesset. She continues: "There are two issues here – the first is whether they can live there, the other is ownership. I was there during an eviction of a family in the past. The ruling prevents such scenes for the time being, and in that sense, it’s very important. But I’m not sure it will serve as a precedent for similar cases in other Palestinian neighbourhoods. The question of ownership has to do with discriminatory and racist legislation which the ruling won’t fix. So although it is important, the question of ownership still hovers in the air. I believe we have a step further to go.” 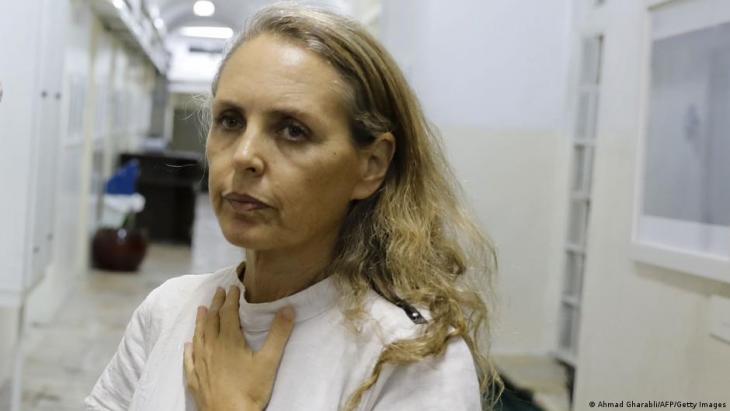 Moving in the right direction: "This eases tensions in the neighbourhood and gives the families certainty, which is important," says Gaby Lasky, prominent human rights attorney, activist and Knesset member. "There are two issues here – the first is whether they can live there, the other is ownership. I was there during an eviction of a family in the past. The ruling prevents such scenes for the time being, and in that sense it’s very important. But I’m not sure it will serve as a precedent for similar cases in other Palestinian neighbourhoods. The question of ownership has to do with discriminatory and racist legislation which the ruling won’t fix. I believe we have a step further to go”

Israeli officials have been quoted as describing this situation to foreign media as a "real-estate dispute". In reality, as MK Lasky points out, it’s an unequal situation with no level playing field.

Jews did indeed lose properties that remained in what became the Jordanian-controlled West Bank during the 1948 war, mostly in the Jerusalem area. But during that same war, Palestinians lost considerably more land and property in what became the State of Israel. Their assets were nationalised following the war and cannot be reclaimed, even when presenting ownership papers. In fact, many families in Sheikh Jarrah used to own property in what is now Israel.

Following the Israeli takeover of the West Bank (including East Jerusalem) in the 1967 Six-Day War, a law was passed allowing Jews to reclaim pre-1948 properties. Legislation denying that same right to Palestinians, even if they are residents of Israel, remains in place.

Only time will tell whether the recent ruling has an impact on the fate of Sheikh Jarrah. In the long-term, however, there are arguably only two ways to stop the injustice that Israeli law allows settler NGOs to advance. The first would be to revoke the law allowing Jews to reclaim pre-1948 properties, equating their status with that of Palestinians. This would, however, require a very left-leaning Knesset, which isn’t on the cards.

Another option, which has also been suggested by the independent think tank Jerusalem Institute for Policy Research (JIPR), is expropriation. Like all states, Israel may expropriate assets if this is found to be in the national interest. When someone’s kiosk, for example, is on the planned route of a new tramway, it can even be moved without their consent, providing they are financially compensated. Although it would take considerable political courage, the government could convince the court that such property rights infringements are of vital public concern. It could also argue that national security interests are at odds with expanding micro settlements within Palestinian neighbourhoods. What ultimately transpires remains to be seen.

Algeria‘s regime is again cracking down on anti-fracking activists and the unemployed in the country‘s south. Yet EU countries remain keen to scale up their energy cooperation ... END_OF_DOCUMENT_TOKEN_TO_BE_REPLACED

Anti-Semitic motifs have no place at Germany’s documenta art show or anywhere else in the world, stresses Meron Mendel, director of the Anne Frank Educational Centre in Frankfurt ... END_OF_DOCUMENT_TOKEN_TO_BE_REPLACED

Fifty-five years after Israel began occupying Palestinian lands, it is more difficult than ever to imagine a way out. The seeds of the two-state solution that were planted by ... END_OF_DOCUMENT_TOKEN_TO_BE_REPLACED

Yazan Khalili is spokesman for The Question of Funding, a collective of artists taking part in the leading German contemporary art festival Documenta 15. Here, he responds to ... END_OF_DOCUMENT_TOKEN_TO_BE_REPLACED

When times are tough, the exchange of ideas and perspectives becomes especially important. It takes dialogue. And at Deutsche Welle, we need distributors and cooperative partners ... END_OF_DOCUMENT_TOKEN_TO_BE_REPLACED

Every week, Jewish, Christian and Muslim youths meet to sing together. And they do so in the middle of a city where Israelis and Palestinians are often at loggerheads. Anja Koch ... END_OF_DOCUMENT_TOKEN_TO_BE_REPLACED
Author:
Noam Yatsiv
Date:
Mail:
Send via mail

END_OF_DOCUMENT_TOKEN_TO_BE_REPLACED
Social media
and networks
Subscribe to our
newsletter