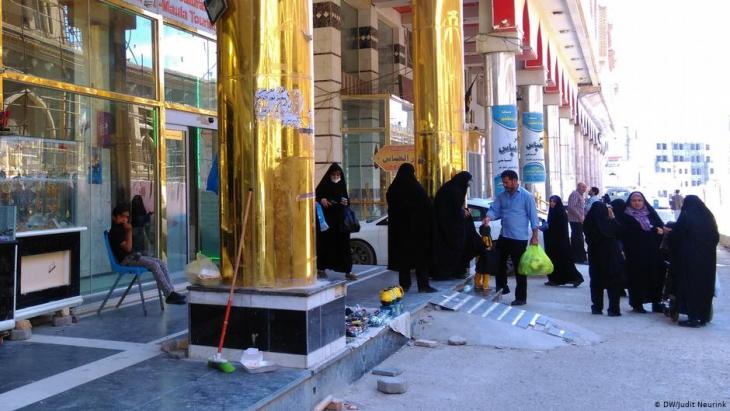 As a result of U.S. sanctions, Iranians can no longer afford the yearly pilgrimage to Iraq's Shia shrines. The holy city of Najaf is bearing the economic brunt. By Judit Neurink

"Not many Iranians can afford to come – not since Trump's decision – and we are losing money as a result." Badr al-Jilawi owns the Qasr al-Assad Hotel, which stands close to one of the world's most holy Shia sites, the Imam Ali Shrine in the Iraqi city of Najaf. Apart from a group of women in black in the lounge, the normally bustling hotel is empty, a direct result of America's embargo on Iran.

But at least this hotel is still open. Over the past year or so, some 500 of Najaf's 700 or so hotels have closed their doors, along with many of its restaurants. The economic fallout from the U.S. sanctions against Iran has been serious.

Most Iranians have had to scrap their yearly pilgrimage to the Iraqi holy sites. As a result Al-Jilawi has lost about 90% of his income. "I have had to move extra beds into the rooms and rent them out for $3 a night per bed. I never thought I would fall so low. Back in the good times, my hotel rooms cost $100 each."

Najaf is almost completely dependent on religious tourism from Iran, thanks, however, to the U.S. embargo, travel has become too expensive for Iranian pilgrims. Najafʹs boom in religious tourism only started in earnest after the fall of the Iraqi dictator Saddam Hussein in 2003. He considered the Iranians the enemy, having fought an eight-year war against them in the 1980s. But when the Shia majority came to power in Baghdad, the restrictions were dropped and Iranians started to pour into Iraq in their thousands. 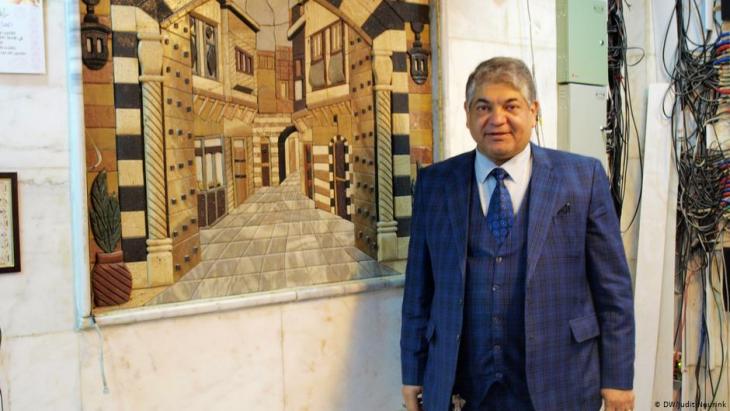 Financial disaster for the Iraqi business community in Najaf: most Iranians have had to cancel their annual pilgrimage to Iraqʹs holy sites. Hotel owner Badr al-Jilawi has lost about 90% of his income. "I have had to move extra beds into the rooms and rent them out for $3 a night per bed. I never thought I would fall so low. Back in the good times, my hotel rooms cost $100 each"

For Najaf, the change was enormous. From an impoverished town with some 50 hotels to cater for very restricted religious tourism, it developed into a city with high-rise buildings, shops, hotels and restaurants catering to a huge volume of tourists. Nonetheless, the community soup kitchens were still needed at times to help feed all the pilgrims. Now they mostly feed the many Iraqis who have become victims of the U.S. embargo on Iran.

But the embargo may yet prove more painful. Sixteen years after Saddam's fall, Iraq still cannot produce enough energy to cover its needs and is dependent on gas and electricity imports from Iran. And while Washington is allowing these to continue, for the time being at least, this concession is due to end this month.

Baghdad has already communicated the need to increase the amount of Iranian electricity it imports during the coming summer – a need that also stems from the experience of violent riots in Basra. The southern city often suffers from a lack of electricity during the hot and humid summers.

This is also why the Iraqi government has vowed to remain neutral in the conflict between the U.S. and its neighbour. Both exert considerable influence in Baghdad.

The Americans helped the Iraqis build a new government and a new army and have supported the country in its fight to quell Islamic State. Iran, on the other hand, provides political parties and militias with financial support. In addition to gas and electricity, it also exports food staples, fruit and vegetables to Iraq.

"The Americans aren't only punishing Iran"

That dependency is most visible in Najaf, where Trump's name is on everybody's lips as the root cause of all their troubles. "The Americans aren't only punishing Iran, they're punishing Iraq, too, because we are losing customers and money," says Said Ali Mossawi, a co-owner of a Najaf restaurant that usually caters to tourist groups. As they have been for months, the rows of tables are empty this lunch time. 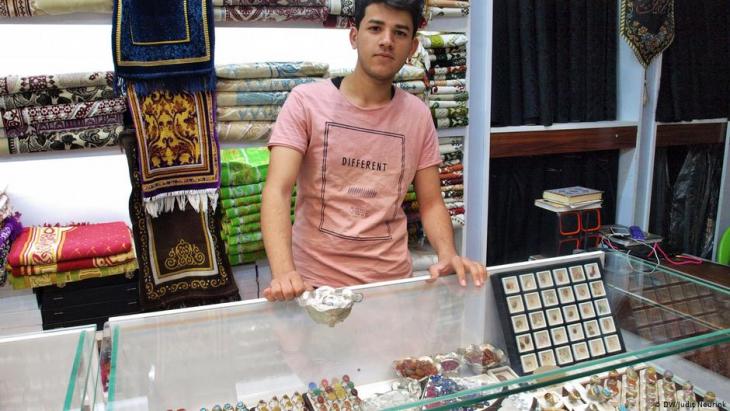 Forced to adapt: Ahmed Ali, who sells precious stones for rings and jewellery in one of Najaf's many bazaars has seen his income fall by as much as 85%. Iranians favoured a special white stone that is almost transparent and can only be found in the holy city of Najaf, but the seventeen-year-old hasn't sold one for months now. "I have had to adapt," he says, pointing to the jewellery that now fills his shelves, which is designed to appeal to the tastes of pilgrims from other countries

Mossawi says he has lost over half his customers and has had to sack about 40% of his staff. "And I am not completely dependent on the Iranians. Imagine what it is like for those who don't work with Iraqis or pilgrims from other countries." Only the Iranians came in huge numbers and throughout the year. In the mostly empty streets around Najaf's holy shrine, some Lebanese women are sheltering from the sun, but Shias from countries like Pakistan, India, Bangladesh and the Gulf States mainly visit during the religious festivals.

Not everyone in Najaf was happy with the hordes of people that flocked into their city, but nobody is complaining anymore. The exchange rate for the Iranian toman on which they grew rich has dropped as a result of U.S. policy and hardly any are now spent in Najaf. Skeletons of unfinished buildings clutter the city centre, where only the odd bus drops off groups of Iranian women covered in their black chadors.

"They even bring their own food and cook it themselves," says kebab shop owner Hamid Abbas, who has not had any Iranian customers for a while. "After Trump's decision, none of the Iranians eat in restaurants anymore." His income has fallen by 40%, but he remains hopeful. "When the problems are over for Iran, they will be over for us too."

For 17-year-old Ahmed Ali, who sells precious stones for rings and jewellery in one of Najaf's many bazaars, the fall in his income may be as high as 85%. Iranians favoured a special white stone that is almost transparent and can only be found in the holy city of Najaf, but he hasn't sold one for months now. "I have had to adapt," he says, pointing to the jewellery that now fills his shelves, which is designed to appeal to the tastes of pilgrims from other countries.

Iraq has tried to stop the downward spiral by agreeing to give Iranians their Iraqi entry visa for free. Unfortunately, this measure has failed to bring any visible results, say those affected in Najaf. "In Iran, a chicken costs about 15 toman; here the price is over 100," explains kebab shop owner Abbas. But jewellery seller Ali, like many Najafis, hasn't given up hope just yet. "As soon as Trump allows them, they will come back."

The USA and NATO plan to withdraw from Afghanistan by September. The operation is risky, the outcome uncertain. Many Afghans fear civil war. The quake on the Hindu Kush will also ... END_OF_DOCUMENT_TOKEN_TO_BE_REPLACED

The Prophet Muhammad never executed anyone for apostasy, nor encouraged his followers to do so. Nor is criminalising sacrilege based on Islam’s main sacred text, the Koran. In ... END_OF_DOCUMENT_TOKEN_TO_BE_REPLACED

Surging coronavirus cases in many parts of the world have overshadowed the start of this year's Muslim holy month of Ramadan, with festivities once again curtailed by contagion ... END_OF_DOCUMENT_TOKEN_TO_BE_REPLACED

German Middle East analyst Guido Steinberg and television journalist Ulrich Tilgner have both published new books on the conflicts in the Middle East. Their analyses and their ... END_OF_DOCUMENT_TOKEN_TO_BE_REPLACED

On 27 March, Iran and China signed a 25-year accord intended to foster "strategic co-operation". Despite ongoing uncertainty over the deal's actual scope, content and chances of ... END_OF_DOCUMENT_TOKEN_TO_BE_REPLACED

Researchers agree that climate change alone cannot be blamed for the outbreak of war in Syria in 2011. However, neither can it be ignored as a reason this once blossoming country ... END_OF_DOCUMENT_TOKEN_TO_BE_REPLACED
Author:
Judit Neurink
Date:
Mail:
Send via mail

END_OF_DOCUMENT_TOKEN_TO_BE_REPLACED
Social media
and networks
Subscribe to our
newsletter