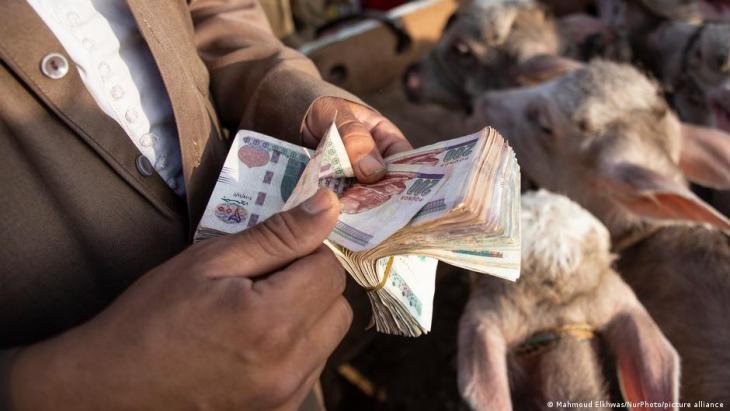 Economic crisis on the Nile
Is Egypt the 'new Lebanon'?

Food prices doubled, salaries halved, banks restricting withdrawals: Egyptians now have the same problems as the Lebanese. But if things get worse here, the fallout will be far more damaging. By Cathrin Schaer

As the value of the Egyptian pound plummets, grocery shopping has changed for many middle-class Egyptians, becoming a strict exercise in currency control. "Instead of buying three kilograms of rice when we go shopping, we just buy a kilo or a half kilo," explained Ahmed Hassan, 40, an accountant and father-of-three from the Shoubra neighbourhood in Cairo. "We're trying to reduce our expenditure. Unfortunately we can't limit everything because our children need certain things," he admitted.

Egypt's currency has devalued by around one-third since late October and inflation currently stands at over 20%. Some economists suspect it's even worse than that. They put the unofficial rate – which includes Egypt's huge informal economy – as high as 101%. Food prices doubled, salaries halved and banks that restrict how much cash you can take out of your accounts: The financial freefall that many ordinary people in Egypt are experiencing today sounds very similar to the catastrophic economic crisis citizens in nearby Lebanon have been dealing with since 2019.

In Lebanon, desperate locals have gone so far as to rob their own banks simply to withdraw their savings, cities have been plunged into darkness as fuel for power stations has run out and the country's middle class is being pushed into debt. Things haven't gone that far in Egypt yet. But as the bad economic news keeps coming, some are asking: Could Egypt soon become "the new Lebanon?"

'Remarkable similarities' between Lebanon and Egypt

"There are remarkable similarities between Lebanon's now abjectly failed economy and Egypt's struggling one," Robert Springborg, an adjunct professor at Canada's Simon Fraser University, wrote in a 2022 report for the Washington-based non-profit organisation Project on Middle East Democracy (POMED). "The consequences of the collapse of confidence in Lebanon have been devastating, but they would pale into near insignificance if repeated on an Egyptian scale," he warned. 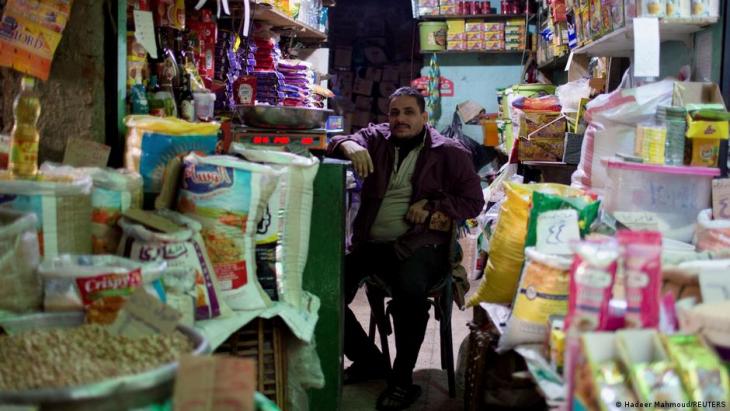 The cost of food and drink in Egypt has risen by almost 40% over the past year: grocery shopping has changed for many middle-class Egyptians, becoming a strict exercise in currency control. "Instead of buying three kilograms of rice when we go shopping, we just buy a kilo or a half kilo," explained Ahmed Hassan, 40, an accountant and father-of-three from the Shoubra neighbourhood in Cairo. "We're trying to reduce our expenditure. Unfortunately we can't limit everything because our children need certain things"

Egypt's current economic problems are the result of a number of internal issues – including political unrest, corruption and government mismanagement – which have more recently combined with external crises, like the COVID-19 pandemic, the war in Ukraine and the threat of a global recession. The pandemic decimated Egyptian tourism, one of the country's big money earners. Then the Ukraine war disrupted wheat supplies to the country, the world's biggest importer of wheat.

Since 2014, the Egyptian government, led by President Abdul Fattah al-Sisi, has promoted national "mega-projects" including the world's longest, driverless monorail – at a cost of €21 billion; and a whole new city, the €46 billion New Administrative Capital, near Cairo. These have artificially driven growth in the country. Many of the projects are also connected to the Egyptian military's vast money-making business network.

Policies like these, allowing state and military-owned enterprises to dominate the economy, have depressed the private sector in Egypt, discouraged foreign investment and seen the country become more dependent on foreign credit for its survival. Egypt owes over €138 billion, and roughly one-third of its national income goes toward servicing that foreign debt.

Recently all of these factors have come together to put Egypt "on the brink of a financial and economic abyss", Rabah Arezki, a former chief economist at the World Bank's Middle East and North Africa Region, wrote at the beginning of January 2023.

As quickly as I wrote it, the pound walked past 30 vs the dollar. This is getting very, very scary.

- what is the risk of default and how?
- what does Lebanon on a scale of 108 million people look like? #Egypt https://t.co/ijibf8ijBL pic.twitter.com/JO5AmbJb0z

"The reason the pandemic and the Ukraine war have had such a big impact is because of the investment strategy led by Sisi for nine years: massive spending on huge projects, some of which were totally unnecessary or poorly conceived," said Yezid Sayigh, a senior fellow at the Carnegie Middle East Center in Beirut. "This made Egyptian finances very vulnerable, without providing the economy with real gains."

International governments, including those of Germany and the U.S., are partially to blame, Sayigh said. "He [Sisi] couldn't have increased Egypt's debt by 400% without their direct involvement."

There are some similarities between Egypt and Lebanon – Egyptian poverty levels, for instance, are nearing Lebanon's with at least 60% of Egyptians living in or near to the poverty line. "And then there's the willingness of the political elite to callously enrich themselves at the expense of the state and the public," said Timothy Kaldas, an expert on Egypt's political economy and a policy fellow at the Tahrir Institute for Middle East Policy (TIMEP). "That's definitely also something the two countries also share."

"But despite some similarities, things like poverty and corruption are common to numerous Arab countries, so you cannot draw simple comparisons," the Carnegie Institute's Yezid Sayigh argued. "Also, the Egyptian government is not corrupt in the same way as Lebanon."

"For all of its problems, Egypt is fundamentally in a much more stable situation than Lebanon," TIMEP's Timothy Kaldas agreed. "It's not on the verge of total collapse in the way that Lebanon was."

President Abdul Fattah al-Sisi's rash investment in prestige projects: since 2014, the Egyptian government has promoted national "mega-projects" including the world's longest, driverless monorail – at a cost of €21 billion; and a whole new city, the €46 billion New Administrative Capital, near Cairo. These have artificially driven growth in the country. Many of the projects are also connected to the Egyptian military's vast money-making business network. Policies like these, allowing state and military-owned enterprises to dominate the economy, have depressed the private sector in Egypt, discouraged foreign investment and seen the country become more dependent on foreign credit for its survival

For one thing, Egypt's economy has more potential sources of cash than Lebanon's, Kaldas noted – such as the Suez Canal, the tourism industry and various export industries. Lebanon was more heavily dependent on remittances from its ex-patriot community for foreign cash; prior to the current crisis, these made up as much as a quarter of Lebanese national income.

Additionally, Egypt's leadership can be negotiated with, Kaldas pointed out. "Whereas in Lebanon they are still struggling to choose a new president."

Egypt, too big to fail?

But perhaps the biggest difference between Egypt and Lebanon is that Egypt is commonly seen as "too big to fail". With around 107 million inhabitants, it is the region's most-populous nation. It also has the Middle East's most powerful military.

"What makes Egypt lucky, is that external backers place more importance on the viability of the state, irrespective of how badly it's managed," Kaldas explained. "I hate to say this, but from the perspective of key external backers, Lebanon's problems are much more manageable and containable, than if they were happening in a country with over 100 million people."

In mid-December, the International Monetary Fund (IMF) approved a $3 billion support package for Egypt. It is the country's third such arrangement with the IMF since 2016, and is supposed to help Egypt attract more investment from abroad as well as further financial aid.

To complete the deal, the Egyptian government has had to make several important concessions to the IMF. One involves making its foreign exchange rate more flexible – part of the problem that led to the record-breaking devaluation of the Egyptian pound was the fact that it had been pegged to the U.S. dollar. Another IMF demand involves a promise to send direct cash transfers to 5 million vulnerable Egyptian households by the end of this month.

This new law allowing the military controlled Suez Canal Authority to independently decide on leasing or selling Canal assets as well as retain an unspecified share of the profits from Canal toll fees is alarming and fundamentally at odds with elements of the new IMF deal. https://t.co/QrZ6kRQ8NR

A further commitment made by Cairo was the promise to rein in the Egyptian military's vast economic empire. The fact that Egypt has finally agreed to do this is, the Carnegie Center's Sayigh wrote on 12 January, "is breath-taking". But, he added, "it may also be pure make-believe".

The new IMF bailout may bring Egypt back from the brink yet again, but it's hard to say whether it can provide real relief for long-suffering citizens. The government and the country's elites will try to retain their advantages and wealth, all the while seeking to wriggle out of concessions around, for example, decreasing the military's economic power, Kaldas said.

But even if all the conditions in the IMF package are met, Kaldas said, the country's recovery won't come quickly. "Egyptians who are already struggling, are going to get poorer still over the coming year," Kaldas said. Egypt is unlikely to become the next Lebanon, he concluded, "but nothing is going to prevent growing economic hardship for Egyptians in the coming year."

Abortions are illegal in Egypt unless they are necessary to save a married woman's life. But that doesn't stop local women from having one. Egyptian society needs to acknowledge ... END_OF_DOCUMENT_TOKEN_TO_BE_REPLACED

Giessen, Eichsfeld, Kusel, Berlin – cars bearing old German number plates are the latest trend on the streets of Cairo. Many Egyptians regard the discarded plates as chic. What ... END_OF_DOCUMENT_TOKEN_TO_BE_REPLACED

Egyptian Sufis have been on the defensive against the country's Islamists for decades. Meanwhile, interest in mysticism is growing among the young members of Cairo’s middle and ... END_OF_DOCUMENT_TOKEN_TO_BE_REPLACED

Chinese President Xi Jinping's visit to Saudi Arabia in December 2022 may have rattled Washington, but it simply highlighted the Arabs’ desire to diversify their foreign relations ... END_OF_DOCUMENT_TOKEN_TO_BE_REPLACED

Asmaa al-Atawna's debut novel "Missing Picture" has been published in German translation (Keine Luft zum Atmen – Mein Weg in die Freiheit). In it, she describes life in Gaza from ... END_OF_DOCUMENT_TOKEN_TO_BE_REPLACED

Where are the measures to deal with the looming challenges facing the Arab world? In this commentary, Marwan Muasher warns that the region is in grave danger of falling behind ... END_OF_DOCUMENT_TOKEN_TO_BE_REPLACED
Author:
Cathrin Schaer
Date:
Mail:
Send via mail

END_OF_DOCUMENT_TOKEN_TO_BE_REPLACED
Social media
and networks
Subscribe to our
newsletter