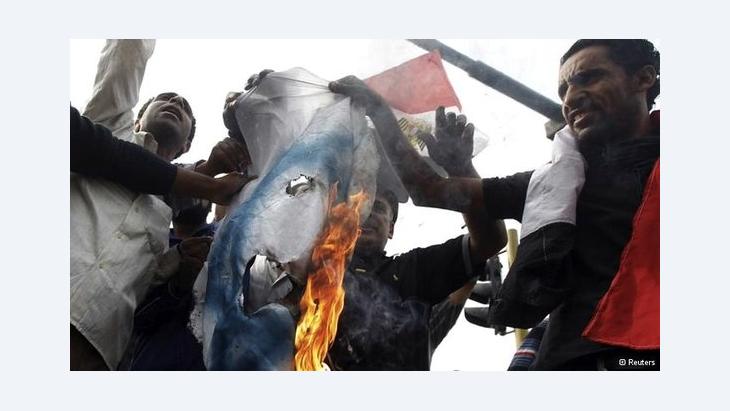 Egypt and the Gaza Crisis
Mounting Pressure on President Morsi

﻿After the Israeli attacks on Gaza, Egypt's President Mohammed Morsi is under increasing pressure to balance domestic and international expectations. The anger among Egyptians over Israel and the US could even force Morsi to insist on renegotiating the peace treaty with Tel Aviv. By Matthias Sailer

It was only a few hundred Islamists that gathered at Cario's Tahrir Square after Friday prayers, shouting angrily in protest of the attacks on Gaza and calling for the end of the state of Israel.

Through a megaphone, a Salafist preacher condemned the US and Europe, condemning the states for still supporting Israel. The dictators once supported by the West had disappeared and now it was time for the Muslims, he told the angry crowd, recalling the West's decades-long support of pro-Israeli dictators like former Egyptian President Hosni Mubarak.

But the situation remained calm: essentially, the demonstrators supported the line of their government under President Morsi. "It was right that Morsi withdrew the Egyptian ambassador from Israel," said 33-year-old Mohammed, one of the protesters. "And it was also right that he sent the prime minister to visit Gaza."

Early on, Morsi exhausted all diplomatic measures to protest Israel's attacks on Hamas in Gaza. He described the air raids as "unacceptable" and called for the UN Security Council to get involved. 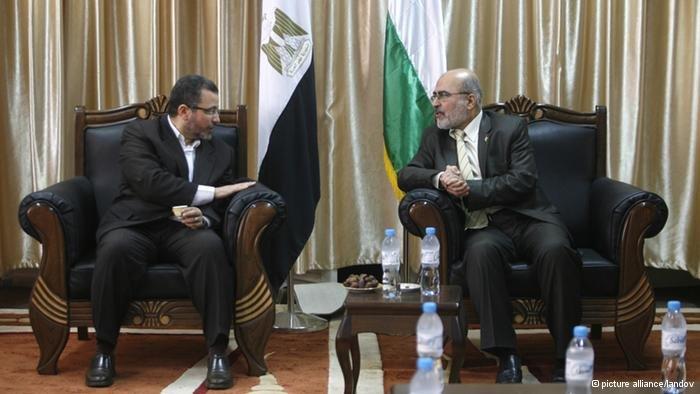 During his visit to Gaza, Egypt's prime minister Kandil's insisted on the establishment of a Palestinian state with Jerusalem as a capital. If this was anything more than just propaganda, it'll be hard to see them as an attempt to mediate, Matthias Sailer writes

​​But he knew very well that this measure would bring nothing, as Israel's main international ally, the US, has a veto right in the Council. Opening the border crossing to Gaza at Rafah to get wounded Palestinians into Egyptian hospitals was also not a big step. Morsi had to go further and send Prime Minister Hesham Kandil to Gaza in order to live up to the domestic pressure.

"Now we have freedom," said Nour El-Din Selim, a Salafist demonstrator. "We can openly say what we think and take to the streets to support Gaza. Had we done this under Mubarak, we would probably have ended up in prison."

The pressure on Morsi is enormous. No matter how much Egypt's parties are quarrelling with each other, they are all united in their hatred of Israel. A feeble reaction by Morsi would lead to an immediate drop in his popularity levels.

Parliamentary elections are already planned for next year, and before that there's to be a referendum on the new constitution. On Thursday the leadership of the Muslim Brotherhood, Morsi's political home, called for protests. The fact that Morsi sent his prime minister on a three-hour trip to Gaza earned him a lot of admiration from many Egyptians, including from protester Nour El-Din.

"It was a good step; it shows the people in Palestine that the Egyptian people and the government are with them and that they are not alone," he said.

Mediating between Israel and Hamas?

Whether the visit to Gaza goes beyond mere symbolic significance remains to be seen. Earlier, US President Barack Obama called on Morsi to help negotiate between Israel and the radical Islamic Hamas in charge of administrating Gaza. 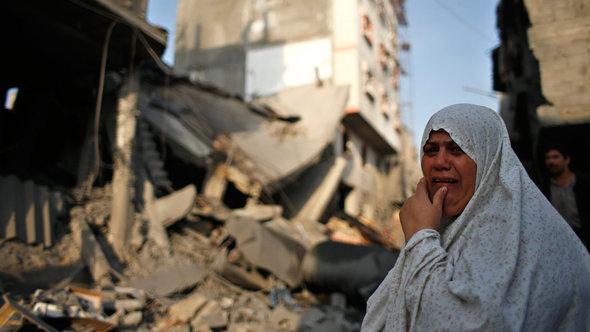 "Why do Obama and the US government believe that Israel has the right to kill Palestinian women and children, or destroy civilian buildings and schools, basically destroy an entire people? Is that what they see as human rights?"

​​However, the words of Prime Minister Kandil in Gaza were unlikely to have pleased Israel. At one stage he said that "the Egyptian revolution will not cease to work toward ending this attack, establishing a cease-fire that will last until there's a fair and comprehensive peace, and until there's a Palestinian state with Jerusalem as a capital". That last condition is unlikely to have much support from Israel, and if Kandil's words were anything more than just propaganda, it'll be hard to see them as an attempt to mediate.

But Morsi can't afford to fall out with the US entirely. He needs to get his country's ailing economy back on track. Without an economic resurgence, the Muslim Brotherhood, and Morsi, will not be able to solidify their power.

And it's the US that will essentially decide whether Egypt will get the money it so desperately needs from the International Monetary Fund (IMF) – one of the reasons Morsi has so far not called into question his country's peace treaty with Israel.

But, should Israel launch a ground offensive into Gaza, Morsi would find himself with his back to the wall, for there's a lot of anger in Egypt about the US support of Israel. "Why do Obama and the US government believe that Israel has the right to kill Palestinian women and children, or destroy civilian buildings and schools, basically destroy an entire people? Is that what they see as human rights?" asked protester Ahmed Fuad.

Giving in to the US and Israel would seriously damage Morsi's credibility. The anger among Egyptians over Israel and the US could even force Morsi to insist on renegotiating the peace treaty with Tel Aviv. A further escalation of Israel's operation against Gaza, therefore, is a great danger for Egyptian-Israeli relations.

Millions in Idlib depend on aid coming through a northern border crossing. On 10 July, the UN Security Council votes whether to keep it open. The decision may hinge not only on ... END_OF_DOCUMENT_TOKEN_TO_BE_REPLACED

Although many Arabs express sympathy for the Ukrainian people, social media reveals a current of support for Russian President Vladimir Putin that is rooted in polarisation, ... END_OF_DOCUMENT_TOKEN_TO_BE_REPLACED

Bachtyar Ali sends the hero of his latest novel – "Mein Onkel den der Wind mitnahm" – literally flying. Jamshid is so thin after his years as a political prisoner that a gust of ... END_OF_DOCUMENT_TOKEN_TO_BE_REPLACED

The murder of a female student at Mansoura University in the Nile Delta has sparked a long overdue debate on femicide in Egypt. Karim El-Gawhary reports from Cairo END_OF_DOCUMENT_TOKEN_TO_BE_REPLACED

For a century, the Kurds and other minorities in Turkey have been subject to state repression. With his dissertation "The Kurdish Question in Turkey", political analyst Ismail ... END_OF_DOCUMENT_TOKEN_TO_BE_REPLACED

END_OF_DOCUMENT_TOKEN_TO_BE_REPLACED
Social media
and networks
Subscribe to our
newsletter