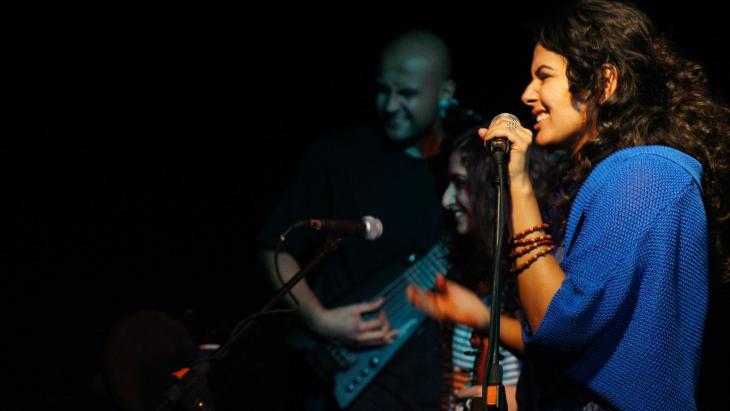 Singer Dina El Wedidi was one of the most prominent Egyptian singers among the protestors in Tahrir Square. She has just released her latest album, "Manam / Slumber", an experimental venture featuring a 30-minute suite that captures the sounds of Egypt’s trains and railway stations. By Stefan Franzen

Dina El Wedidi is sitting in a Paris hotel room, a cacophony of banging, hammering and drilling from a construction site outside punctuates the conversation. It is the perfect background for talking about her new album. "Manam" (in Arabic) or "Slumber" is the title of her new album, which takes the listener on a journey through seven stations evoked only by the sounds of the railway and by her voice. Railways and trains may seem a typically male preserve, so what was it about the subject that attracted her as a young woman?

"On my album 'Turning Back' I experimented with a fusion of folk styles in collaboration with various musicians", says El Wedidi. "But this time I was curious about the topic of sound design, I wanted to learn new skills, become a producer as well as a musician. The idea for 'Slumber' came from a friend who needed sounds from the Egyptian railways for a website archive. In collecting them for him, I quickly learned just how diverse these sounds are. I was also interested in the idea of time machines back then and for me the train became something symbolically connected with time."

All about the train 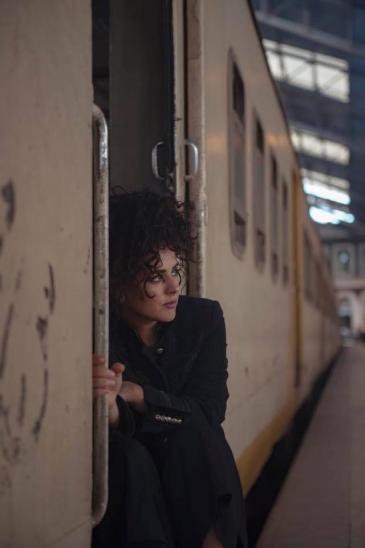 Dina El Wedidi’s railway suite goes far beyond being a mere celebration of a tonal experience. "Slumber" for her is also a reflection on the tension between reality and the subconscious, the spaces that open up during a night train ride when one is half asleep

Several musicians have integrated train noises into their music: Kraftwerk’s "Trans Europa Express", for example, Bjork’s soundtrack to "Dancer in the Dark", or "Different Trains" by the minimalist composer Steve Reich.

Reich, in particular, has been a source of inspiration for El Wedidi. But she has taken things a step further. "I asked myself how I could make the train the centre of things and how I could find the right melodies, harmonies and rhythms. It took quite some time to turn the train into an instrument."

Support came from German-American sound engineer Brian Smith, who introduced her to Ableton software. Before long, her collection of sounds had been transformed into a fantastic railway symphony.

At times, the plaintive, elegiac notes of the locomotive horns are barely recognisable as such, the rattling rhythms no longer clearly attributable to their railway origins.

Yet the voices of the railway station are always there too, the toots and rumbles impressively woven into intricate technoid whirls of rhythm.

Dina El Wedidi collected her sounds on the Cairo to Alexandria line and on the route to the south that ends in Luxor and Aswan.

"The most important trip I took was the night train to Luxor," she recalls. "There, in the sleeping car, the train noises come to you quite clearly, as they do in the slow train to Aswan, which is so antiquated it takes seven hours for the journey instead of one.

But it was these dusty old trains and the high-pitched frequencies they produce that most interested me."

They are the kind of noises that one hardly hears anymore on high-speed European networks.

Tension between reality and the subconscious

But Dina El Wedidi’s railway suite goes far beyond being a mere celebration of a tonal experience. "Slumber" for her is also a reflection on the tension between reality and the subconscious, the spaces that open up during a night train ride when one is half asleep.

Such a state is captured in the onomatopoeic song "Headache", a dialogue between the outside world with the rattling of the train, the water-seller in front of the compartment on the one hand and the thoughts in one’s head during a migraine attack on the other.

"I don’t want that to sound too dramatic," El Wedidi explains with a laugh, "it’s also meant to be humorous". Other songs tell of how homeland, or love, can shackle us and about other states of entrapment, physical or mental.

A dangerous place for artists

This also says something about the current situation in Egypt. The country can be a dangerous place for courageous artists, as the case of recently arrested poet Gala El-Behairy demonstrates. "Egypt is a great place to get ideas," says Dina El Wedidi, "but I prefer to realise them abroad where I can find more to inspire and influence me. I have to get out of the country from time to time in order to breathe."

As a former musical activist on Tahrir Square in Cairo, she is aware that the present situation is not what the younger generation were hoping for. She remains confident however. "My travels around the world have shown me that there are other artists who are suffering just as much. Censorship has become a global problem in the U.S. and in Europe as well as in Africa and the Middle East. The question is, what to do about it? The best thing is to try to go on doing what you believe in. That is what I have to do."

On "Slumber" she explores space and freedom impressively and playfully, capturing their essence in a realm of words and sounds all her own.

Arab women played a leading role in the protest movement of 2011. Since then, ongoing social transformation has had a considerable impact on their lives. What is their assessment ... END_OF_DOCUMENT_TOKEN_TO_BE_REPLACED

They’ve already got the Louvre; they’ll soon have a Guggenheim Museum as well – and now the Emirates have added literature to their quest for cultural supremacy in the Arab world ... END_OF_DOCUMENT_TOKEN_TO_BE_REPLACED

Years in the making, Sisi's elite New Administrative Capital will isolate most Egyptians from their centres of government in an effort to fortify the regime against any social ... END_OF_DOCUMENT_TOKEN_TO_BE_REPLACED

Professor Timothy Brennan's "Places of Mind: A Life of Edward Said" is a detailed biography of one of the most important intellectuals of the twentieth century, taking us on a ... END_OF_DOCUMENT_TOKEN_TO_BE_REPLACED

China has long portrayed itself as a strong supporter of the Palestinian cause. It has also claimed that in sharp contrast to the stance of the USA, its position is based on ... END_OF_DOCUMENT_TOKEN_TO_BE_REPLACED

Recep Tayyip Erdogan, disappointed by the European Union’s reluctance to integrate Turkey into its ranks, has re-directed his country’s diplomacy toward the Maghreb and Africa to ... END_OF_DOCUMENT_TOKEN_TO_BE_REPLACED
Author:
Stefan Franzen
Date:
Mail:
Send via mail

END_OF_DOCUMENT_TOKEN_TO_BE_REPLACED
Social media
and networks
Subscribe to our
newsletter