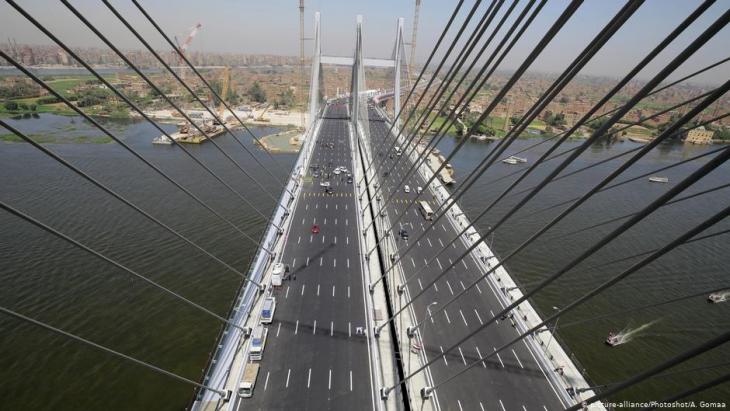 Sisi prioritises large-scale infrastructure projects to galvanise support, but these projects intensify the military’s hold over the economy, while providing no tangible broad economic benefits. By Maged Mandour

Since coming to power, Egypt’s President Abdul Fattah al-Sisi has undertaken various mega infrastructure projects with dubious economic benefits. Despite a worsening debt crisis, these projects remain a government priority. The debt crisis has grown with the percentage of the total debt of the GDP at 101 percent as of the end of 2018 and the cost of servicing the debt reaching 31 percent in the 2016-2017 budgets.

One of the notable challenges of the debt crisis is the budgetary strain of meeting interest payments. This has prompted the government to plan debt restructuring, reliance on longer-term loans, and the issuance of zero-coupon bonds, which have no interest payments and are sold at a major discount. Despite the strain on the budget, the push for mega-infrastructure projects remains.

You may also like: Whether to topple President Sisi…

Sisi denied this in May 2019, stating that the role of the military in these projects is purely "supervisory". However, recent reports have traced the growth of the military owned firms under President Sisi, particularly military-owned firms involved in mega-infrastructure projects.

The most notable example is the military-owned El Arish Cement Co, which has recently constructed Egypt’s largest cement factory, worth $1 billion. As of 2018, the factory’s capacity for cement production is at 12.6 million tons a year, with Egypt’s production capacity at an estimated 79 million tons. The military had previously stated that these new constructions and new projects would increase the size of the market.

The growth of the military’s economic reach prompted the International Monetary Fund (IMF) to issue a warning in September 2017 that job creation and private sector development "might be hindered by involvement of entities under the Ministry of Defence."

Sisi himself had previously commended the military in November 2014 to deliver mega-infrastructure projects three to four times faster than the private sector – an indication of the intention to rely on the military to implement these projects – which increases its economic power.

Since President Abdul Fattah al-Sisi seized power in Egypt in 2013, he has ruled the country with an iron fist. Civil society, opposition and free press struggle to survive. Tens ... END_OF_DOCUMENT_TOKEN_TO_BE_REPLACED

The lack of grain supplies from Ukraine is forcing Egypt to act. Now even the Toshka project is being revived to grow grain in the desert. Birgit Svensson travelled to see it END_OF_DOCUMENT_TOKEN_TO_BE_REPLACED

In this unusually beautiful book of images and text, published in German and Arabic, artist Marianne Manda presents her own unique take on the megacity of Cairo. In over fifty ... END_OF_DOCUMENT_TOKEN_TO_BE_REPLACED

A stage, lights, a mesmerised audience: it looks like an Egyptian folkloric concert, but Umm Sameh is singing to heal the sick by driving out the demons that possess them END_OF_DOCUMENT_TOKEN_TO_BE_REPLACED

END_OF_DOCUMENT_TOKEN_TO_BE_REPLACED
Social media
and networks
Subscribe to our
newsletter