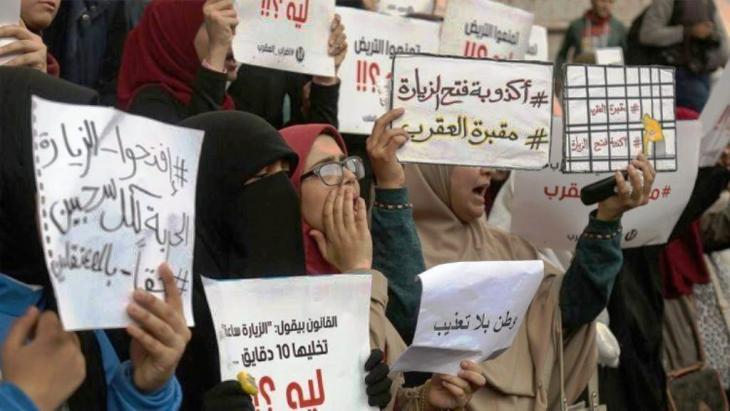 Egypt′s hotbeds of radicalisation
From inmate to jihadist

Torture, abuse and overcrowding in Egyptian prisons is fostering the radicalisation of Islamist inmates, with many turning to Islamic State as the highest role model to aspire to. In a Qantara.de exclusive, Mustafa Abduh met with some former prisoners

19-year-old Mahmoud Shafiq was arrested in 2013 with books under his arm on the way to school. He had made the mistake of running past a demonstration by the Muslim Brotherhood. After a year of preventive detention, he was released – an utterly changed young man. On 11 December 2016, he blew himself up in the midst of worshippers at the St. Peter and St. Paul Church in Cairo, killing 26 people.

While Mahmoud was in custody, the public prosecutor dropped the charges alleging that he was a member of a banned terrorist organisation (the official term for the Muslim Brotherhood) and in possession of weapons and explosives. But he was nonetheless sentenced to two years of imprisonment for participating in demonstrations. By then, however, he had already left home and proceeded to go into hiding for two years rather than face more prison time. According to security forces, he reached the Sinai and joined the terrorist militia Islamic State.

Mahmoud's father, who died several years ago, was an officer in the Egyptian Army. It is therefore assumed that the young man was not radicalised until he ended up in prison and was subjected to brutal torture. There is no conclusive evidence that he was actually the Cairo attacker. Although the IS took responsibility for the bombing in a video, they named a different alias than the one determined by the Egyptian authorities.

Nevertheless, the tragedy has now triggered a public debate on the radicalisation of youth in Egyptian prisons. The danger is steadily increasing, especially as the IS has stepped up its recruitment activities in correctional facilities.

Not only Islamists are in the government's crosshairs

More and more young opposition members of every persuasion are being arrested in Egypt. The statistics supplied to Qantara.de by the Egyptian Co-ordination for Rights and Freedoms are staggering: in 2013 more than 8,435 people were arrested and in 2014 the number had exploded to 32,718. Arrests dropped somewhat again in 2015 to about 23,000 and the first half of 2016 saw 3,209 such cases. Overall, a total of 64,000 people have thus been arrested, of whom only some 20,000 were later released. 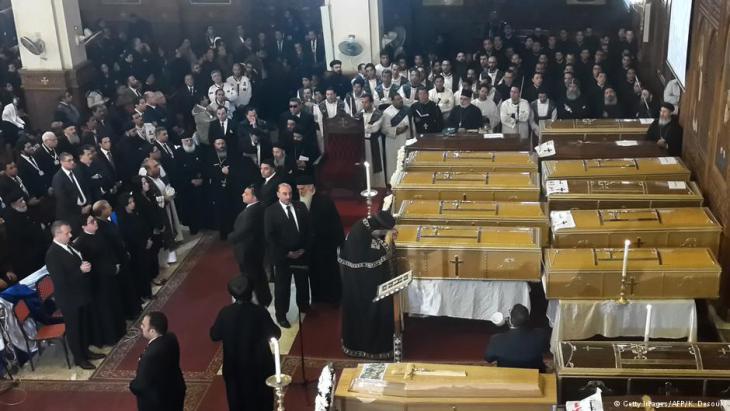 Trail of death: following the attack of St. Peter and St. Paul′s Church in Cairo, the Egyptian interior ministry was quick to point the finger at leading representatives of the forbidden Muslim Brotherhood as being behind the bombing. The interior ministry asserted that the suicide bomber and those helping him had been financed and trained by Qatar. In reaction, the jihadist militia IS dismissed this version of events, claiming it was behind the terrorist attack

Since Morsi was removed from office, the Egyptian state has ordered the construction of 16 new prisons. Some have already officially opened, while others are still under construction. The most notorious of them all, where the IS has also stepped up its activities, are the high-security prison Al-Aqrab as well as Istikbal Tora and Burj al-Arab. In Istikbal Tora alone, at least 30 prisoners had joined the terrorist organisation by the time Ahmad, who was accused of co-operating with the Muslim Brotherhood, was released in mid-2015. The oldest among them had not yet turned 35.

Abuse and isolation: a recipe for radicalisation

Former inmates from several prisons estimate the chances of radicalisation as being highest at Al-Aqrab. Brutal torture methods used there along with violent hazing make it much easier for inmates to see joining the IS as their salvation. Further exacerbating the situation are complete isolation from the outside world and months-long bans on visits. The IS recruitment rate can usually be correlated with the severity of abuse, the prisoner's own tolerance level and the fellow-inmates he comes into contact with.

Initially, the central prison authority pursued a strict isolation policy in terrorism cases. The Al-Aqrab high-security prison was thus intended exclusively for inmates suspected of co-operation with organisations such as Ansar Bait al-Maqdis (renamed Wilayat Sinai since it made common cause with the IS in November 2014), Ajnad Misr or the Muslim Brotherhood. Over time, however – and faced with a steady rise in such cases – this strict division could no longer be maintained. 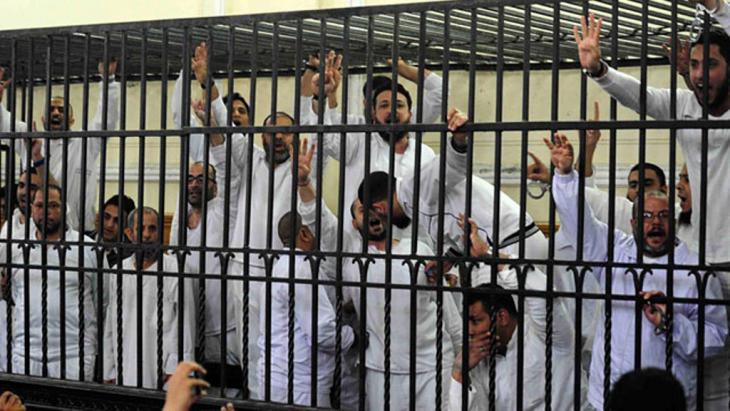 Muslim Brothers – enemies of the state: last year, the human rights organisation Human Rights Watch (HRW) condemned conditions in Egypt′s notorious high-security prison Al-Aqrab. Inmates – many of them political prisoners – are subject to regular abuse and held in inhumane conditions. Numerous Muslim Brothers are among those being held

Ahmad, 35 years old and a former prisoner, doctor and one of the leaders of the Muslim Brotherhood, currently lives in an Asian country. While in prison, he witnessed preparations being made for housing terrorism suspects. At the end of 2014, the administration in Istikbal Tora decided to clear out 7 cells in Tract A (which form a "quarter"). Ahmad says that the prison guards mistreated the inmates during the move and then distributed them among other cells that were already full. In the now-empty quarter, security measures were implemented for accommodation of supporters of the IS and other organisations being relocated from Al-Aqrab.

"After the IS members arrived, the mood in the tract changed," recounts Ahmad. "They called people to prayer after the entire tract had already prayed and branded everyone else as heretics. Every night, Wilayat Sinai battle songs rang out through the prison."

Ahmad was incredulous at how the management simply tolerated this behaviour. "When we dared to call out the simplest slogans such as 'Down with the military government!' or 'The Interior Ministry is a gang of thugs', the prison management went insane. Each time, all hell would break loose in the tract. But the same people couldn't care less about the battle songs of the IS, which incited people to do one thing only: 'Blow up and destroy'... One song went: 'It is time! It is time! With sword and Koran we assure our Caliph in full awareness: Oh, Abu Bakr, even if you send us into a sea of death, we will not waver!'"

Alaa Abd el-Fattah, arguably Egypt’s most prominent democracy activist, has just been handed another lengthy prison sentence. Despite this, a book of his writing has recently been ... END_OF_DOCUMENT_TOKEN_TO_BE_REPLACED

People in Arab countries have been talking more openly about sex and sexuality for some time now, especially on social media. And for the first time ever, they have the vocabulary ... END_OF_DOCUMENT_TOKEN_TO_BE_REPLACED

A prominent rights group in Egypt, the Arabic Network for Human Rights, is ending operations just as the country braces for a controversial NGO law. Is this the beginning of the ... END_OF_DOCUMENT_TOKEN_TO_BE_REPLACED

Moncef Marzouki was Tunisia's first democratically elected president after the fall of dictator Ben Ali. Today he is the most prominent critic of increasingly counter- ... END_OF_DOCUMENT_TOKEN_TO_BE_REPLACED

Asef Bayat, professor of Sociology at the University of Illinois, Urbana-Champaign, has been studying revolutions and how they affect people since 1979. In his recent book, " ... END_OF_DOCUMENT_TOKEN_TO_BE_REPLACED

Every year in December, the team at Qantara.de takes a look back at the articles that proved most popular with our readers. This year is no different. Here is a run-down of the ... END_OF_DOCUMENT_TOKEN_TO_BE_REPLACED
Author:
Mustafa Abdu
Date:
Mail:
Send via mail

END_OF_DOCUMENT_TOKEN_TO_BE_REPLACED
Social media
and networks
Subscribe to our
newsletter