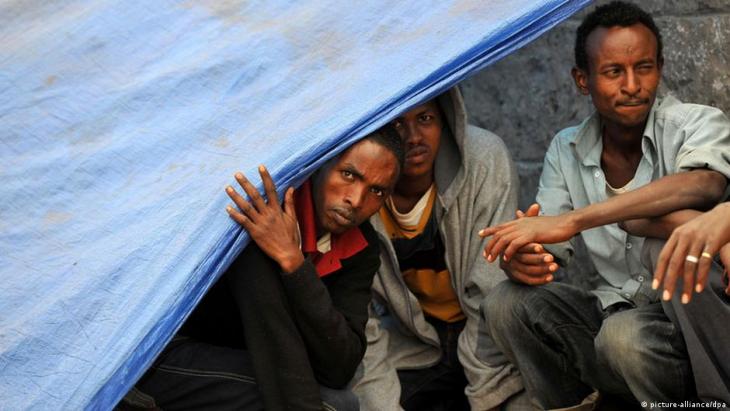 Two refugees detained in Egypt are facing deportation to Eritrea. The expulsion of the Eritreans, who have been incarcerated in Cairo for more than eight years, has been halted for the time being. But the attempted deportation is not an isolated case, and sheds light on Egypt’s draconian approach towards refugees and migrants. By Sofian Philip Naceur

Arrested by Egyptian security forces, imprisoned without a court order, beaten, threatened, and finally incarcerated in the notorious Al-Qanater prison under disastrous detention conditions, without access to the UN refugee agency UNHCR. The story of Alem Tesfay Abraham and Kibrom Adhanom is a case of hardship, while at the same time demonstrating how Egyptian authorities systematically ride roughshod over international refugee and human rights law.

The two Eritrean refugees were arrested in Egypt in 2012 and 2013, and have since been held in a cell designated for foreigners in Al-Qanater men’s prison in the Qalyubiyya province north of Cairo. On 9 September 2021, Tesfay Abraham and Adhanom were taken from their cell, subjected to a PCR test at a hospital, and forced to sign temporary Eritrean travel documents. They were told that their deportation was imminent.

As early as mid-August, the London-based Eritrean human rights group Human Rights Concern Eritrea (HRC) put out a warning regarding the two men’s deportation, and called on the Egyptian government to refrain from expelling them. It asked that Egypt release them instead and finally grant them access to the UNHCR. HRC's urgent appeal appeared to go unheard. Things only started to move when arrangements for their deportation had been finalised.

Several foreign embassies in Cairo, the UNHCR and other UN bodies had apparently been reminded of the case, and increased their pressure on the Egyptian authorities accordingly – with success, at least for the time being. The already initiated deportation to Asmara was halted, and Tesfay Abraham and Adhanom were again transferred to Al-Qanater prison. However, prison staff told them that the deportation had not been stopped, but only postponed. The two men have clearly not been left unscathed by their imprisonment, yet neither has the danger to them of being extradited to Eritrea been averted. 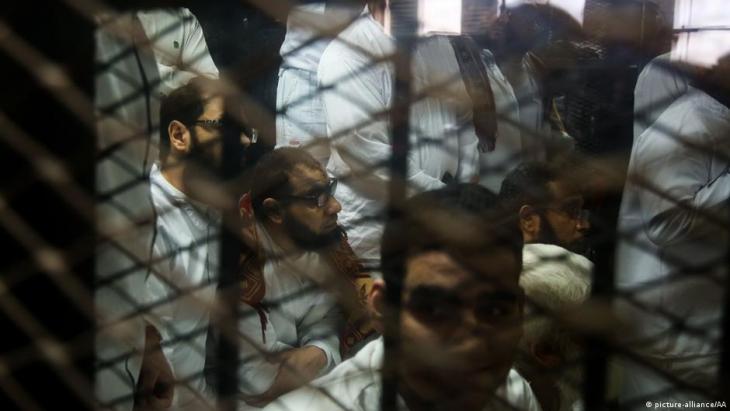 Overcrowded, unhygienic, no medical care: Prisons in Egypt are notorious for their inhumane detention conditions. The two Eritreans Alem Tesfay Abraham and Kibrom Adhanom were arrested by Egyptian security forces, interned without a court order, beaten, threatened and finally imprisoned in the infamous Al-Qanater prison north of Cairo under catastrophic prison conditions and without access to the UN refugee agency UNHCR. "The story of Alem Tesfay Abraham and Kibrom Adhanom is a case of hardship," writes Sofian Philip Naceur, "but at the same time it shows how Egyptian authorities systematically ride roughshod over international refugee and human rights law"

Deportation to Eritrea would have drastic consequences for them: on their return they face indefinite detention, ill-treatment and torture. "Anyone leaving Eritrea without official permission is regarded as a traitor who has committed a crime, according to the Eritrean regime’s policy", the Eritrean human rights group HRC has stated. "Eritreans who fail in their bid to obtain asylum face solitary confinement, torture, inhumane and degrading treatment for extended periods of time upon their return", HRC adds.

One main reason for the high numbers fleeing the small country on the Horn of Africa, which has continued unabated for more than 20 years, is its compulsory military service. Women and men over the age of 18 are subjected to military service in Eritrea, and are often conscripted for an indefinite period. Conscripts are used as cheap labour by the Asmara regime, are often subjected to forced labour, and provided with insufficient or no food, shelter or medical care. Minors are often called up for military training at the age of 14. Abuse, torture and the rape of conscripts is part of everyday life in Eritrea’s army.

Tesfay Abraham and Adhanom also fled Eritrea to avoid the military service. Tesfay Abraham, now 42 years old, fled to Sudan and from there to Egypt in 2012. He was arrested in March 2012 while trying to cross the border to Libya, and transferred to Al-Qanater by the Egyptian authorities shortly after. Egypt has denied him access to lawyers as well as to the UNHCR – the only authority in Egypt where he could have applied for asylum, and thus obtained international protection status.

Adhanom, now aged 37, also fled to Sudan in 2013, was abducted there by human traffickers, and sold to a criminal gang on Egypt’s Sinai peninsula. At the time, well-organised human traffickers were active in the region, deliberately abducting Eritrean refugees and torturing them until their relatives paid large ransoms. Apparently presumed dead, Adhanom was abandoned in the desert by his abusers, only to be found by Bedouins who took care of him and subsequently handed him over to the Egyptian authorities. They moved him back and forth in between different police stations, until he was finally transferred to Al-Qanater in 2014.

#Egypt (@moiegy) must halt the imminent deportation of Kibrom Adhanom & Alem Tesfay Abraham, release them & grant them immediate access to asylum procedures. Forcibly returning them to #Eritrea, where they face persecution, is a grave breach of intl. law. #JusticeForAlemAndKibrom pic.twitter.com/tPLY558ZUz

Usually, refugees or migrants arrested in Egypt are imprisoned by the authorities for a few weeks before being given a suspended sentence by a military court for entering or leaving the country illegally, after which they are released. It remains unclear why this did not happen in the case of Tesfay Abraham and Adhanom.

An anonymous source has confirmed that UNHCR’s Egypt office was aware of the two Eritreans’ long detention, but that it apparently did not persevere hard enough in gaining access to them. A hunger strike by the two detainees in autumn 2020, which lasted for several weeks, attracted some attention to their case, but did not exert enough pressure to force UNHCR and Egyptian authorities to intervene. Only the threat of deportation a fortnight ago, and the accompanying pressure by international human rights groups such as Amnesty International has forced the UN to prioritise the case.

Meanwhile, the detention and attempted deportation of Tesfay Abraham and Adhanom, which violates international refugee and human rights law, is not an isolated incident. Although Egypt signed the 1951 Geneva Convention on Refugees, its arbitrary detention and deportation practices systematically violate its provisions. Even if someone does not hold official refugee status, it is illegal to deport that person to a country where he or she may face a threat to life or freedoms, or be subjected to discrimination or torture, stresses the Egyptian online media outlet Mada Masr, citing an anonymous source.

At the present time, it remains unclear how many refugees and migrants are currently detained in Egypt. In 2013, several hundred refugees were incarcerated in Al-Qanater alone. Today, Al-Qanater’s prison wing designated for foreigners is almost empty. Instead, police stations and detention facilities in southern Egypt have been increasingly used for the incarceration of refugees and migrants for several years, most notably in the provinces of Aswan, Luxor and the tourist resort of Hurghada. Regarding deportation practices, however, few details are known to the public. Thus, the extent of Egypt’s deportation practice remains opaque.

Nevertheless, EU governments have been increasingly co-operating with Egypt since 2016 in the area of border control and migration policy. The EU is attempting to integrate Egypt more comprehensively into its border regime in North Africa, and has funded countless training programmes for Egyptian security bodies. Additionally, the Cairo regime is currently drafting an asylum law, and is being advised on the matter by the EU’s asylum agency EASO. If anything, however, the case of Tesfay Abraham and Adhanom clearly shows that Egypt cannot be considered a reliable partner when it comes to migration and refugee policy.

With authoritarianism once more gaining ground in the Middle East and North Africa, the European Council on Foreign Relations explores how European diplomats can be more effective ... END_OF_DOCUMENT_TOKEN_TO_BE_REPLACED

Abdul Fattah al-Sisi's National Human Rights Strategy smacks of the containment and sabotage tactics adopted by counter-revolutionaries during Egypt's 2011 revolution and its ... END_OF_DOCUMENT_TOKEN_TO_BE_REPLACED

Sudan is the exception to the rule in the United Arab Emirates’ counter-revolutionary playbook, writes James M. Dorsey. In contrast to Egypt or Yemen, where it went out of its way ... END_OF_DOCUMENT_TOKEN_TO_BE_REPLACED

Racism exists in the Arab world. People with dark skin are discriminated against and often see their rights curtailed. Activists have had enough of such treatment and are starting ... END_OF_DOCUMENT_TOKEN_TO_BE_REPLACED

General Abdel Fattah Al-Burhan has declared a state of emergency in Sudan and dissolved the Sovereign Council, which was made up of military personnel and civilians. What will now ... END_OF_DOCUMENT_TOKEN_TO_BE_REPLACED

Sex education – taboo in the Middle East. Or is it? Thanks to social media, millions these days are daring to ask everything about "it". Jennifer Holleis has the details END_OF_DOCUMENT_TOKEN_TO_BE_REPLACED
Author:
Sofian Philip Naceur
Date:
Mail:
Send via mail

END_OF_DOCUMENT_TOKEN_TO_BE_REPLACED
Social media
and networks
Subscribe to our
newsletter