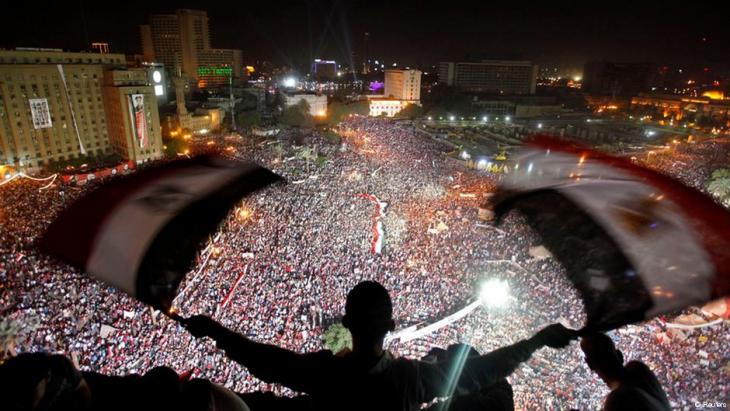 On 25 January 2011, millions of Egyptians took to the streets demanding "bread, freedom, social justice". Eight years later, the democratic opposition is divided because it has been unable to offer an alternative to the military state, says political scientist Taqadum Al-Khatib

When I talk about the opposition, I mean all the different factions from the hard right to the far left that adopt peaceful struggle in order to effect change, without falling into the trap of exclusion and discrimination on the grounds of ideology. The mistakes of the opposition from the very start of the uprising in January 2011 to the present day have been many. Of course, each error was the result of specific contributing circumstances, which will not be addressed here, owing to constrictions of length.

The first sin: the opposition committed the first of its mistakes at the beginning of the 2011 Arabellion, right after Hosni Mubarak had stepped down. They called on protesters to leave Tahrir Square without first securing an agreement on what would happen next – and without realising the value and effectiveness of the square as a means of asserting pressure to achieve the goals of the uprising.

This missed opportunity was the first nail in the coffin of the uprising. Had people stayed in the square for one week after Mubarakʹs fall, it would have been a very different matter, as the Supreme Council of the Armed Forces (SCAF) would not have been able to stand up to the millions of people who had forced it to compel Mubarak into giving up power.

I still remember when I was responsible for political communication in the National Association for Change (NAC). During the meetings, the various political forces, at the head of which was the Muslim Brotherhood, alongside other parties which traditionally had been allied to the deep state, called for the urgent evacuation of Tahrir Square and the immediate launch of the political process – without any agreement on a future vision (in this instance I am not pointing the finger at any one particular party). The reality was entirely opportunistic, with the opposition pulling in different directions and scrambling to inherit Mubarakʹs regime and to divide the spoils among themselves. This was one of the fissures which SCAF played on and exploited, deepening divisions and setting factions against each other. Such rivalry continues to this day. It is something the establishment effectively plays on to prolong its own survival.

The second sin: the failure to formulate a programme involving everyone, with a vision for Egypt post-Mubarak. The opposition, as represented in the NAC, had a programme based on seven demands. These were also the demands that were set out by the revolution in January 2011. As a result the parties found themselves in an intellectual vacuum and with no conceptualisation of the new era after the fall of Mubarak. 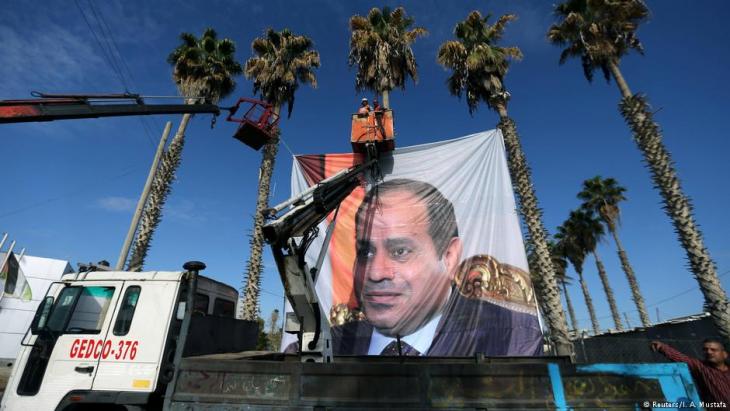 Unintentional shoring up of the militaryʹs status: "the foolhardy abandonment of Tahrir Square was the first nail in the coffin of the uprising," writes Taqadum Al-Khatib. "Had people stayed in the square for one week after Mubarakʹs fall, it would have been a very different matter, as the Supreme Council of the Armed Forces would not have been able to stand up to the millions of people who had forced it to compel Mubarak into giving up power"

The absence of a political programme meant parties focussed on ideology instead. Thus, everyone ignored fundamental issues such as democracy and freedom, preferring to build their vision on the basis of ideology. Indeed, ideology became the policy of every faction. The leftists saw the solution in leftist ideology, whilst the Islamists saw the solution in Islamic ideology, and so on. Hence the peopleʹs fundamental demands (for freedom and democracy) disappeared from the stage as a basis for discourse and policy.

The absence of a programme led to the third sin, namely the lack of rhetoric aimed at bringing the masses on side. It also meant that any debate lacked structure. Moreover, it led to the opposition becoming reactionary (rather than an active player). In consequence, the discourse developed in reaction to events, eventually becoming nothing more than a response to the regimeʹs growing repression.

The fourth sin: the opposition was unable to develop a modus operandi. It could not progress from street protest as the only means of opposition; nor could it break the deadlock.

To name one element in the opposition, the Muslim Brotherhood has not yet grasped that its current formula has simultaneously become a burden on the Egyptian state and on society as a whole. It needs to transform itself into a proper political party with a vision and a goal, leaving the past behind.

The fifth sin was the alliance with the deep state to get rid of political opponents. The National Salvation Front played this role brilliantly. It had no political ambition other than to overthrow the Brotherhood. 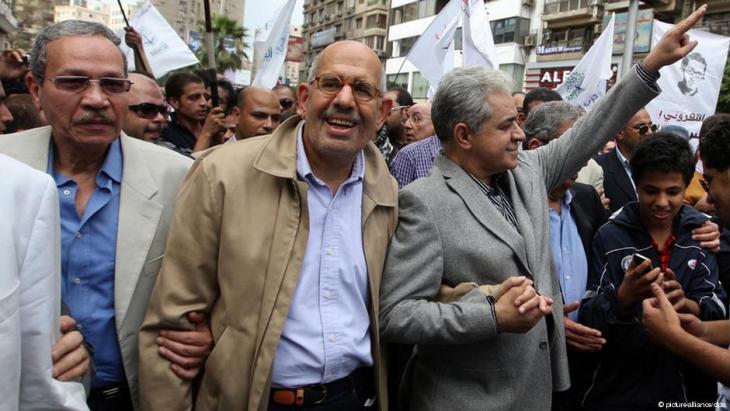 Forever the opposition: "the absence of a political programme meant parties focussed on ideology instead. Thus, everyone ignored fundamental issues such as democracy and freedom, preferring to build their vision on the basis of ideology. The leftists saw the solution in leftist ideology, whilst the Islamists saw the solution in Islamic ideology, and so on. Hence the peopleʹs fundamental demands for freedom and democracy disappeared from the stage as a basis for discourse and policy," writes Taqadum Al-Khatib

Perhaps elements of the NSF, which included remnants of the Mubarak regime and other allies of the deep state, were partly responsible for this. It was evident in the call to the army to overthrow the fledgling democratic experiment. Some among the Brotherhood still confuse the right to peaceful protest and what happened on 3 July 2013, when the masses took to the streets calling for early presidential elections, with some for and some against the idea. Those behind the events of 3 July, however, turned on everyone and seized power without declaring elections, ousting the elected president at the same time.

The sixth sin: acquiescing to the forcible evacuation of Rabaʹa Square occupied by the Muslim Brotherhood. Almost nobody from the opposition opposed it or offered even minimal resistance. Instead, a number of excuses were made such as: ʹthose who sent the protesters to the square were responsible for their killingʹ. They fully accepted the regimeʹs narrative over what happened at the sit-in. The other excuse is that the Brotherhood threatened the existence of the state, which is not true, of course. Had the Brotherhood really been that strong, no-one could have removed them from power.

All this propaganda was but a prelude to justifying mass murder. Breaking the sit-in in Rabaʹa al-Adawiya live on air and in sight and hearing of the world would become the pretext to the killing of any and everyone by the regime, whether would-be opponents or actual ones (and here I very definitely mean the peaceful opposition).
The repercussions of the way in which the sit-in in Rabaʹa al-Adawiya was broken up will linger on in society and in government alike. In its wake, the level of violence in society has grown, as has the propensity to use it. 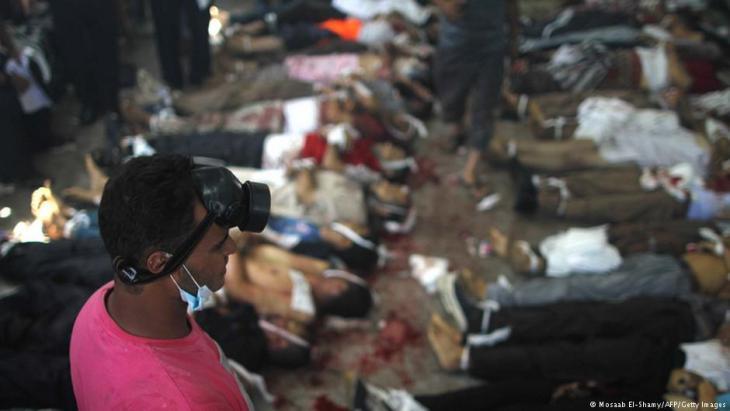 Turning a blind eye to Sisiʹs brutal excesses: on the morning of 14 August 2013 police and military stormed the Muslim Brotherhood protest camp on Rabaʹa al-Adawiya Square in Cairo's Nasr City district. Between 600 and 2,000 people, depending on the source, were killed. Those responsible have yet to be called to account

The seventh sin: the inability to this day to admit mistakes and the failure to call for a process of national reconciliation as a matter of principle – encompassing everybody, regardless of politics and ideology. Once again, we need to re-define terms that have become twisted over the past six years. For instance, political solidarity should be based on the principles of equality, freedom and justice for all, not on ideological and political affiliations. The opposition has contributed to its own defeat and deepened the divisions within its own ranks, and this has in effect become part of its reality. Thus, it canʹt solve its own crisis, let alone focus on the bigger issues such as finding a solution to the current impasse.

The opposition doesnʹt even seem to realise the need for a new process of national reconciliation, involving dialogue between the various parties. Without a constructive dialogue and a consensus on freedom and democracy, the opposition will not be able to present itself as an alternative to a regime which has stopped at nothing in order to stay in power.

Taqadum Al-Khatib is an Egyptian researcher at the universities of Princeton and Berlin. He is a former political liaison officer at the National Association for Change in Egypt.

Despite Syria's lengthy civil war, dictator Bashar al-Assad is now being courted by many governments in the Middle East as if nothing ever happened. The reasons for this vary. By ... END_OF_DOCUMENT_TOKEN_TO_BE_REPLACED

With authoritarianism once more gaining ground in the Middle East and North Africa, the European Council on Foreign Relations explores how European diplomats can be more effective ... END_OF_DOCUMENT_TOKEN_TO_BE_REPLACED

Abdul Fattah al-Sisi's National Human Rights Strategy smacks of the containment and sabotage tactics adopted by counter-revolutionaries during Egypt's 2011 revolution and its ... END_OF_DOCUMENT_TOKEN_TO_BE_REPLACED

Sudan is the exception to the rule in the United Arab Emirates’ counter-revolutionary playbook, writes James M. Dorsey. In contrast to Egypt or Yemen, where it went out of its way ... END_OF_DOCUMENT_TOKEN_TO_BE_REPLACED

Racism exists in the Arab world. People with dark skin are discriminated against and often see their rights curtailed. Activists have had enough of such treatment and are starting ... END_OF_DOCUMENT_TOKEN_TO_BE_REPLACED

General Abdel Fattah Al-Burhan has declared a state of emergency in Sudan and dissolved the Sovereign Council, which was made up of military personnel and civilians. What will now ... END_OF_DOCUMENT_TOKEN_TO_BE_REPLACED
Author:
Taqadum al-Khatib
Date:
Mail:
Send via mail

END_OF_DOCUMENT_TOKEN_TO_BE_REPLACED
Social media
and networks
Subscribe to our
newsletter