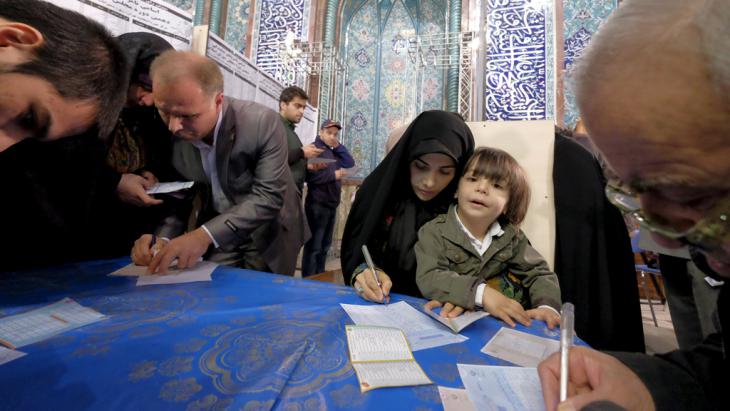 Elections in Iran
A lesson for the powerful and the disempowered

Granted, elections in Iran have little impact on the real political conditions in the Islamic Republic, where to this day the leader of the revolution retains his hold on the reins of power. But even so, the latest round of voting has highlighted the atmosphere among large sections of the civilian population. An analysis by Ali Sadrzadeh

Last Friday‘s elections in Iran, to the country’s parliament and Assembly of Experts, is likely to have a lasting influence on Iranian politics. This might at first sound like an exaggeration: you might object that Iran’s parliament is not the place where fundamental matters are really decided. Nor do the elected reformers and moderate forces have a serious plan for solving the numerous problems in Iranian society.

These arguments are correct, without a doubt. You might even add that these elected moderate forces or reformers don’t even want to change the foundations of the Islamic Republic; after all, they themselves were – and still are – the architects and servants of the religious state to this day. We can therefore expect no political U-turn from them. And without a radical transformation of Iranian domestic and foreign policy, there is no end in sight to Iran’s misery. In Iran, elections are not a process for selecting leaders with comprehensive decision-making powers. All observers are agreed on this point. But even so, these recent elections have been a useful lesson for all Iranians – for the powerful and the powerless of the country alike.

A resounding slap in the face

Above all, it has been a lesson for the country’s most powerful man, Ayatollah Ali Khamenei. These elections once again let him know that he doesn’t have the majority of Iranians behind him. He spoke out openly and directly in support of radical forces several times during the election campaign. The official partisanship was echoed a thousand times over by the official media. 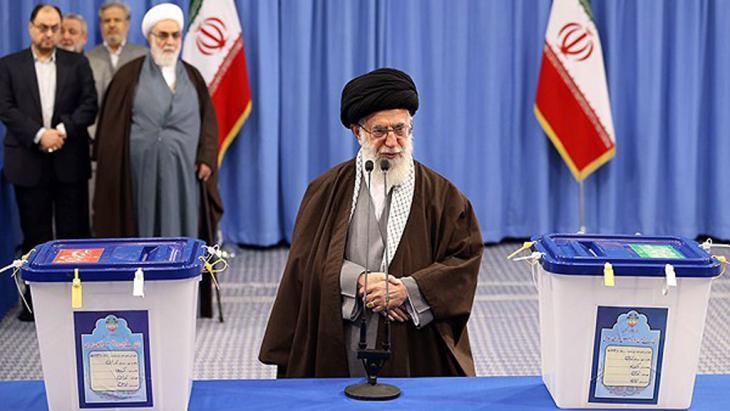 Painful defeat for Iran’s all-powerful revolutionary leader Ayatollah Khamenei: the reformers around President Hassan Rouhani won all 30 seats in the strategically important Tehran district in last Friday’s parliamentary elections. Voters thereby ensured no hardliners remained in parliament for this central district. In the elections to the Assembly of Experts, which will elect a successor to the spiritual leader Ayatollah Ali Khamenei in the event of his death, the reform-oriented "Hope" list also took most of the seats in Tehran

But the majority of Iranians did not follow Khamenei in casting their votes. The elections were therefore a particularly personal and painful defeat for him. Despite his comprehensive control of the country’s most important media and almost all the Friday preachers, who tried to convey Khamenei’s words to the population even in the country’s remotest mosques, the vote did not go in favour of the revolutionary leader’s favourites.

Has Khamenei learned from this defeat? Hard to say: after all, it’s not the first time the Iranian people have voted against his wishes. The best example is probably provided by the 2009 parliamentary elections. At that time, Khamenei took Ahmadinejad’s side, leading to the country’s greatest internal political crisis. And the scars from those wounds have still not healed. The other two 2009 presidential candidates, Mir Hossein Mousavi and Mehdi Karroubi, are still under house arrest. At the time, the two dissidents accused the regime of manipulating the presidential election in which Mahmoud Ahmadinejad was eventually re-elected.

The coming months and years will show how Khamenei will deal with the results of the most recent election. He is in any case powerful enough to turn the tables whenever and however he sees fit. Last Monday one of Tehran’s daily newspapers, "Kayhan", Khamenei’s hymnal, carried a leading article which read: "Do not be so self-assured or start imagining things! According to the constitution and the words of religion, the policy of this country is still determined by the leader of the revolution. How, we will learn in the next few years, if he should live; he has apparently been diagnosed with cancer."

President Rouhani, celebrated as the winner of this election up and down the country, can learn a few things from the voting, too. He knows his victory would have been unthinkable without the assistance of the younger generation. Iran’s young people, Internet-savvy and active on social media, desperately want a life with a job and without paternalism. There are a great many graduates in Iran today – some say too many. But half of them are unemployed. 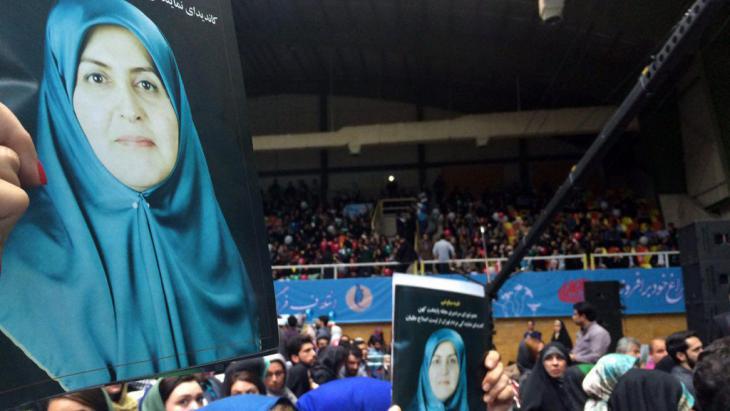 A decent result for Iran’s women: a total of 4,844 candidates, just under 500 of them women, were permitted to stand in the parliamentary elections. Eight women were among the 30 elected representatives in the capital, according to Iranian state television

This time round, it was above all young women from Iranian cities who seem to have made a difference, the majority of them apparently voting for the list and the candidates close to Rouhani. Despite the fact that since becoming president, Rouhani hasn’t been able to do much for this generation – the more radical elements within the government won’t allow it. He has also been kept much too busy with the negotiation of the nuclear agreement. But it is also clear that Rouhani wouldn’t and couldn’t ever be a reformer, even if he always describes himself as a moderate.

But without these supposed reformers, this victory would have been impossible. Their figurehead is the former president Mohammad Khatami, whose image and name are however now banned from official media. But Khatami addressed the public via YouTube, warning them of the consequences of boycotting the elections. His clip spread like wildfire, being viewed millions of times in Iran. The reformers, too, have had to learn a lesson from this vote: boycotting elections is damaging and a return to power will only be possible through a more complicated alliance. This is, of course, a painstaking process that demands a great deal of patience. And it is questionable whether the younger generation is still prepared to summon up the patience required.

And this election has one final lesson for the Iranians. Two thirds of young Iranians are completely au fait with the Internet and social media. During this election, they have shown that even in Iran the age of traditional media is over. And if the circumstances of this election had been different, if all candidates had been permitted to stand, then we might well have seen even more surprises in the voting behaviour of the younger generation.

Ali Sadrzadeh was born in Estahbanat, Iran. Having completed school and teacher training, he initially worked as a teacher in Tehran. In 1970 Sadrzadeh came to Germany to study psychology and engineering in Kiel, concluding his studies in Frankfurt in German and politics. In 1980 Sadrzadeh returned to Iran. He has worked for the dpa  and the Frankfurter Rundschau. From 1990 to 1994 he was North African correspondent with the German state broadcaster ARD.

Home
Print
Newsletter
More on this topic
Elections in Iran: Even Khomeini can be disqualifiedSocial justice and political reforms in Iran: A ticking time bombFive years after Iran's "Green Movement": Past and present
Related Topics
Ayatollah Ali Khamenei, Hassan Rouhani, Iranian opposition, Media in Iran, New media in the Muslim world
All Topics

Iranian author Fariba Vafi is adept at describing everyday scenes and concealing within them something ambiguous, in parts strange and grotesque. She writes novels – which have ... END_OF_DOCUMENT_TOKEN_TO_BE_REPLACED

In her latest exhibition in Japan, Farzaneh Khademian depicts figures who seem detached from their surroundings. In interview with Qantara.de, the Iranian photographer and painter ... END_OF_DOCUMENT_TOKEN_TO_BE_REPLACED

The catastrophic human rights situation in Bahrain is being largely ignored by the rest of the world. Despite all the damning evidence, which includes a Human Rights Watch report ... END_OF_DOCUMENT_TOKEN_TO_BE_REPLACED

Talks to salvage the 2015 Iranian nuclear deal have entered their eighth round in Vienna. Even if a deal is struck and some of the sanctions are lifted, the state of the Iranian ... END_OF_DOCUMENT_TOKEN_TO_BE_REPLACED

Every year in December, the team at Qantara.de takes a look back at the articles that proved most popular with our readers. This year is no different. Here is a run-down of the ... END_OF_DOCUMENT_TOKEN_TO_BE_REPLACED

END_OF_DOCUMENT_TOKEN_TO_BE_REPLACED
Social media
and networks
Subscribe to our
newsletter