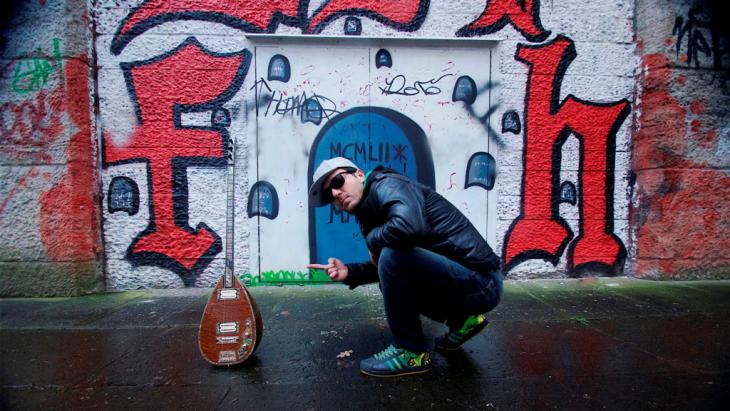 His sound may be a mix of psychedelic, arabesque and rock but, behind the anarchic facade, all "Elektro Hafiz" wants to do is touch people with his music. Ceyda Nurtsch on a musical maverick who constantly reinvents himself while remaining true to his Turkish roots

The word hafiz in Arabic refers to someone who is able to recite the entire Koran by heart. What's in a name? When he arrives, Elektro Hafiz is dressed in low-slung, baggy jeans, sneakers and black leather jacket, with a black and white keffiyeh scarf around his neck and a baseball cap on his head. Slung over his shoulder is a baglama or saz, a centuries-old long-necked lute.

His music is as eclectic as his appearance. His electronic sound, backed by dub rhythms, carries echoes of the music of Erkin Koray and Baris Manco, the pioneers of so-called Anatolian rock, who came up with the technique of playing oriental quarter tone melodies on electric guitar.

At the same time, it also has something of the plaintively arabesque musical signature of Muslum Gurses, an artist whose more extreme fans hit the headlines due to their habit of slitting themselves with razor blades at his concerts – their blood-smeared bodies adorning the pages of the newspapers the following day – weltschmerz indeed!

Searching for the authentic

"I'm always searching for the authentic, for the pain that comes from somewhere inside," says Elektro Hafiz, speaking in a rapid staccato, his fingers drumming the table in front of him. His inspiration, he says, comes from the broad spectrum of everything that can be categorised as "World Music": Russian tavern songs, Bulgarian guitar, Indian sitar, post-war German krautrock and shamanic music. Top of the list for him are Muslum Gurses – because of his interpretations – and Nesat Ertas, one of Turkey's most popular poets, whom he calls "a philosopher among musicians."

He would never describe himself as an artist, he says modestly, his green eyes twinkling out from between his black scarf and black cap. His true identity, like his private life, remains concealed behind his stage alter-ego. Such a label would be far too pretentious, he protests. He is just someone who tries to make music. Even the word "instrument" is one he prefers to think of in term of its original meaning, as a tool or an implement, something to help him establish contact with his audience.

Arabesque music from the 70s and 80s and old film music from the vinyl record era have been experiencing a revival for quite some time. In Berlin, people like DJ Ipek have been digging out old hits from their collections and remixing them, while in Istanbul, Kabus Kerim is one of those adding new beats to old records. Elektro Hafiz also reworks old sounds, transforming them into something fresh and new, but he is also a creator of his own original work.

Born and brought up in Istanbul, as a young boy he listened to the record collection of his father, who had also been a musician before his son was born. His father had wanted him to take up the piano, but as a boy he already had a mind of his own and decided the guitar was more to his taste. Soon he was producing a sound that mixed rock with the forms of oriental quarter-tone music, hicaz makami.

The last 20 years has seen the release of three albums with his band, Feiruz Derin Bulut – five young guys, sometimes with moustaches and sunglasses and lace covers on their drums, who play a mixture of arabesque and hard rock in the tradition of musicians such as Erkin Koray. Their sound is dominated by tinny electric guitar and the high pitched keyboard notes redolent of Turkish weddings. They perform lots of cover versions, as well as writing their own retro-style songs reminiscent of The Beatles LSD period, complete with nonsense texts and references to children's songs and pop music.

The nostalgia of memory

Elektro Hafiz left Istanbul some years ago, moving to Cologne, for what he has referred to simply as "private reasons". A move away from home will sharpen memories and at the same time bring new interpretations of the past. It was in this phase that he picked up his saz, which had been lying around ignored and began to improvise. The reaction was amazing – first of all from the Germans, who didn't know the instrument and wondered whether it might be a Turkish guitar. "It is neither a guitar, nor Turkish," he explains. "This instrument is played by the Kurds and by the Laz people of the Black Sea in the Balkans. It is an instrument that belongs to a place rather than a people." 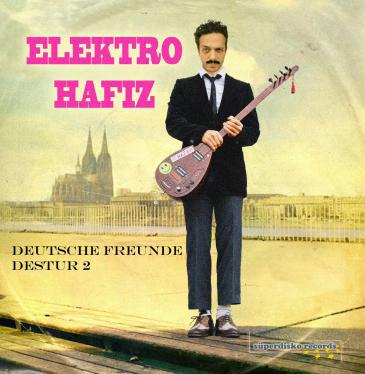 All things are possible and there are no limits: Elektro Hafiz′ sound is a blend of arabesque and psychedelic rock

Reaction among the Turks living in Germany was just as striking. The traditionalists were quick to accuse him of corrupting Anatolian culture. Such concerns cut no ice with an anarchistic punk however. And the positive responses soon followed. A new persona, Elektro Hafiz, was born – travels throughout Germany and the neighbouring European countries followed – and recently, he returned to Istanbul for the first time, in his new artistic identity.

In "Babylon", a venue for international artists outside the mainstream, a place where the Istanbul avant-garde are usually to be found with bottles of beer in their hands swaying to the rhythms of Oscar and the Wolf, the Austrian DJ Peter Kruder or the sombre tones of Turkish singer Gaye Su Akyol, Elektro Hafiz's audience broke into an electro version of the ecstatic halay folk dance.

Recently, browsing through some old music recordings, he stumbled across a song, sung in German, by old Turkish rocker Cem Karaca, "Es kamen Menschen an", that begins with a line by the Swiss writer Max Frisch: "Es wurden Arbeiter gerufen, doch es kamen Menschen an" (It was workers that were called for, but people who arrived). He also happened upon the song "Deutsche Freunde" (German Friends) by the singer Ata Canani and his band Die Kanaken. The topicality of the subject matter is something that appeals to him. The performance is a touch anarchic, every note resonating with resistance to the existing system. He covered the song, but stresses that "I am not a migrant worker, nor trying to be their voice. But I am always on the side of the oppressed. I am a human being and I fight for human rights." And alongside his music, he says, he works on projects with young people and asylum seekers, fighting discrimination, generalisation, sexism and violence.

His new album "Electro Hafiz" is due to be released on a Spanish label in spring. It is virtually one long jam session with the participation of friends from different countries. The message is that all things are possible and, actually, there are no limits. Who knows what will happen next.

Giessen, Eichsfeld, Kusel, Berlin – cars bearing old German number plates are the latest trend on the streets of Cairo. Many Egyptians regard the discarded plates as chic. What ... END_OF_DOCUMENT_TOKEN_TO_BE_REPLACED

Tunisia has been going through a severe economic and political crisis in recent years. More than one in three young people there are unemployed. For many skilled, qualified and ... END_OF_DOCUMENT_TOKEN_TO_BE_REPLACED

German imams have publicly expressed their solidarity with the women of Afghanistan. In a letter of protest, the clerics say that the Taliban regime's decree barring women from ... END_OF_DOCUMENT_TOKEN_TO_BE_REPLACED

At the end of every year, the team at Qantara.de gives you a run-down of the ten most-read articles on the site over the past 12 months. Here is a quick overview of the stories ... END_OF_DOCUMENT_TOKEN_TO_BE_REPLACED

Social engagement is often motivated by religious factors. A new book explores the background to these community efforts and appraises how effective they are in helping to ... END_OF_DOCUMENT_TOKEN_TO_BE_REPLACED

The government in the Netherlands, one of the last European nations to abolish slavery, has made an historic apology. But some feel that there is still a long way to go. By Ella ... END_OF_DOCUMENT_TOKEN_TO_BE_REPLACED
Author:
Ceyda Nurtsch
Date:
Mail:
Send via mail

END_OF_DOCUMENT_TOKEN_TO_BE_REPLACED
Social media
and networks
Subscribe to our
newsletter