Bahrain was long considered the democratic pioneer in the Gulf region. However, for some time now, reform efforts have been petering out. In the run-up to the recent election to the lower house, the ruling dynasty unleashed a wave of arrests, targeting the country's Shi'ite opposition. Hanna Labonté reports from Manama 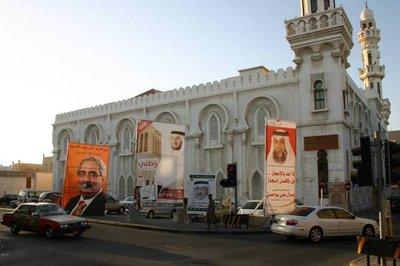 Democracy on the retreat: "The democratic reform process in Bahrain has slowed down enormously in recent years; the opposition is even speaking of regression in this respect," writes Hanna Labonté. Pictured: Election posters outside a mosque in Bahrain

​​ For years, the Arab Gulf states and Iran have been arguing about the name of the gulf that borders their countries, about whether it is called the Persian Gulf or the Arabian Gulf.

The small island nation of Bahrain – the word "Bahrain" means "two seas" – not only lies geographically in the middle of this contentious body of water, it is also in the middle culturally, religiously, and politically too, influenced both by Shi'ite Iran and the mainly Sunni Arab Gulf states. The differences are further compounded by the fact that although Shi'ites make up almost 70 per cent of the population in Bahrain, political power centres on the country's Sunni ruling dynasty.

The Shi'ite group Wifaq took 18 of the 40 seats in the lower house in the recent election, thereby confirming the trend begun in the last election. Despite the fact that this result means that Wifaq retains the majority in the lower house, its political ability to act is restricted by the constitution. The Shura, the upper house whose members are nominated by the King and is dominated by a Sunni majority, will remain the centre of power in the kingdom after the election.

Conflicts between the government and the Shi'ite minority

The democratic reform process in Bahrain has slowed down enormously in recent years; the opposition is even speaking of regression in this respect. According to the opposition, there were irregularities during the election: voters were surprised to find that their names were suddenly no longer in the electoral register; others were prevented from casting their vote. 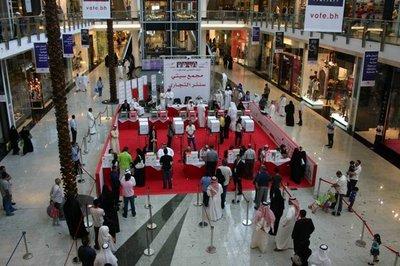 A young tradition: after elections in 2002 and 2006, the people of Bahrain recently elected the members of their parliament for only the third time; however, a number of irregularities were reported during the elections

​​ In the run-up to the election, there were repeated clashes between the government and members of the Shi'ite minority. Many Shi'ites feel like second-class citizens; in recent weeks, they gave vent to their rage and disappointment about the deterioration in the political climate by organising regular road blocks.

"The prisoners belong to different political groups," says Mohammed al-Maskati of the Bahrain Youth Society for Human Rights (BYSHR), "but they are all united by the desire for freedom and the firm belief in human rights." After the first wave of arrests in September and after other human rights organisations in Bahrain came under pressure from the government, the BYSHR decided to continue its work from Europe for the time being.

Blogging as a terrorist act

Among the accused are Dr Abdul Jalil Al-Singace, chairman of the Human Rights Commission of the Haqq movement, which has boycotted the elections so far in protest at the constitution imposed by the king, and the young blogger Ali Abdulemam. 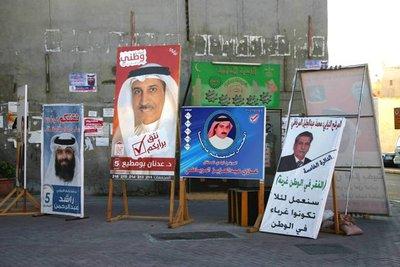 Elections, yes; freedom, no: Bahrain has slipped 48 places to 144th on the Reporters Without Borders press freedom index since 2008

​​ Abdulemam, who – according to the Bahraini state press agency – was arrested for "disseminating fictitious and malicious information and rumours about domestic politics in Bahrain, that put the security and stability of the kingdom at risk", was head of the most important opposition Internet discussion forum in Bahrain, Bahrainonline.org, the toleration of which was considered to be the standard by which the increasing openness of the country was measured.

The site, like dozens of other blogger, opposition and human rights organisation sites in Bahrain, has been blocked; Abdulemam has been in prison since early September, and Bahrain has slipped 48 places to 144th on the Reporters Without Borders press freedom index since 2008.

In his blog, Abdulemam was very critical of the government and was not afraid to use drastic words. However, it is likely that it was the even more critical entries of other forum users that were his downfall.

Tight security at the start of the court case

On the opening day of the trial on Thursday, several prisoners, who had not been allowed to make contact with their lawyers, brought charges of torture against the Bahraini security forces. At the start of proceedings, which were opened under incredibly tight security in Manama, all of the accused pleaded not-guilty. After hearings were postponed until 11 November, the prisoners were allowed to contact their lawyers for the first time.

Suppressed majority: the Shi'ite cleric and INAA chairman Sheikh Ali Salman called for the "will of the people" to be respected

​​ "What we are seeing here is happening because people are being discriminated against because they belong to a certain group and fundamental freedoms and rights have been restricted," says al-Maskati, who criticised that western governments are not doing enough to urge Bahrain to uphold human rights. Al-Maskati is referring here to the US's political interests in the region. The US has stationed its fifth fleet in Bahrain, its last bastion before Iran.

It is unlikely that the US would be keen to see the Shi'ite majority population, which is close to Iran, taking political power in Bahrain. One can assume that this is why Washington is avoiding all criticism that could weaken the Sunni government in any way. So, for the moment, Bahrain's human rights activists and opposition activists are on their own.

Deterring Arab Democracy
Unholy Alliances
The West has long turned a blind eye to the flagrant democratic deficit in the Arab world in favour of its decades-long alliances with autocrats in the region. According to Arab media expert Khaled Hroub, the alternative is not palatable to the West: free elections would only sweep Islamist groups to power

No Democracy in the Arab World
The Curse of Arabia
In spite of cautious reforms in several Arab countries, most of the authoritarian rulers in the region have not been ready to restrict their wide powers over state and society. Noureddine Jebnoun looks at why this region is quite so unwilling to engage in reform

First Catholic Church in Qatar
Signal for New Religious Tolerance
The first catholic church was recently dedicated in the Muslim Gulf State of Qatar. Among those taking part in the dedication was Bishop Paul Hinder, apostolic vicar for Arabia. He told Ina Rottscheid about the new reality of religious freedom in the Gulf States

Women in the Gulf
Exploited and Patronized
States in the Gulf like Bahrain, Oman, Qatar, Saudi-Arabia, and the United Arab Emirates are nowhere near achieving the implementation of equal rights for women in society. Foreign female workers in particular are almost treated like slaves. Petra Tabeling reports

END_OF_DOCUMENT_TOKEN_TO_BE_REPLACED
Social media
and networks
Subscribe to our
newsletter