All the World's a Rubbish Bin

Egypt faces severe environmental challenges – but there is little environmental awareness among the public. Even leading intellectuals are interpreting news of global warming as a chimera created by "the West". Joseph Mayton reports 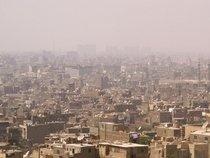 The air pollution in Cairo is a matter of serious concern. Air quality measurements in Cairo have also been recording dangerous levels of lead, carbon dioxide and sulphur dioxide

​​ At one of Cairo's most expensive restaurants, a group of young professionals are leaving. As they get up, a few napkins are tossed nonchalantly into the already littered waters of the Nile. Here in Egypt, there is little sense of a public space worth preserving.

Like in other parts of the Middle East, the idea of conservation and environmental activism is unknown and almost nonexistent, despite pressing issues such as water shortages, extinction of species and environmental pollution, to name just a few. Not to mention the larger issues of marine degradation and the possibility of the entire Delta region being submerged under water due to rising sea levels as a direct result of global warming.

Lawn of litter, spots of grass

Omnia Amr, a Sudanese environmentalist and founder of Eco Options Egypt – an environmental event planner and content provider – says that what makes it extremely difficult to launch a widespread environmental movement in the region is that people don't have the same feeling of responsibility for the public domain as they do for their homes. 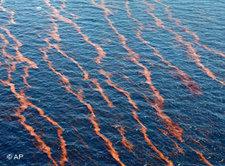 ​​ She's right. Looking around Egypt's streets and public spaces, litter competes with the meagre amount of grass that can be seen. Egyptians and foreigners alike often joke that the rubbish bin is everywhere. And we can tell.

So when organizations and advocacy groups like Eco Options Egypt host events on green initiatives, or when the Hurghada Environmental Protection and Conversation Agency (HEPCA) begins a campaign to have shark meat removed from the French supermarket chain Carrefour, no one outside the small circle of activists really seems to care.

Amr and other activists who engage in the field of environmental issues complain that the environmental movement is often ridiculed and shunned by local media. In many ways, it is seen as foreign or Western, and it has yet to make a solid impact on the ground. 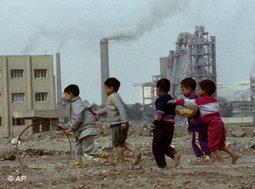 "There is something afoot in the wind": Cairo has many unregistered lead and copper smelters which heavily pollute the city

​​ Nonetheless, a number of environmental groups, including HEPCA, have issued statements on the devastating impact that carbon emissions, offshore oil rigs and tourism are having on the Red Sea's marine life and coral reefs. A decade ago, Sharm el-Sheikh was home to some of the most beautiful diving waters in the world.

Today, much of the coral just off the coast has turned grey and is dying, if it is not dead already. Marine life has migrated further south as regularly occurring oil spills – like the one in June of this year – change the ecosystem of the water.

The Middle East has a long history of living side-by-side and in cohesion with the environment. The Nile River gave ancient Egypt its life, creating a symbiotic relationship that was extremely fruitful. Modern Egypt is attempting to take control of that environment, but it is seeing devastating changes in both the environment and, more importantly, in people who believe they are the owners of the planet and animal life that surrounds them. This manifests itself in the idea that the street is an appropriate place for cigarette butts, plastic bottles and meat leftovers. 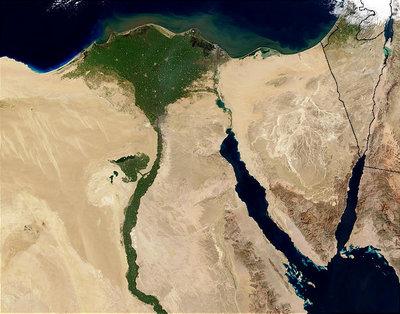 If all else fails, a total pig-headed unwillingness to look facts in the face will see us through: The climate change is just a myth that is created by the West to take what is rightfully ours, say intellectuals in Egypt. Pictured: Nile River and delta from orbit

​​ One Christian leader in Cairo told me recently: "There is no such thing as climate change; it is just a myth that is created by the West to take what is rightfully ours."

In February in Cairo's al-Ahram Weekly, Abdel Moneim Said, head of the leading Al Ahram Center for Strategic and Political Studies, wrote about how global warming might be a Western construction, echoing the Christian leader's sentiments. In the article, he cites a television interview he conducted with climate change denier Czech President Vaclav Claus as evidence that global warming might not be all about what Western so-called "scientists" tell us.

Moneim Said continues to argue that the world has experienced rising temperatures in the past and that "nature had its own laws and ultimately knew how to balance itself".

It is hard not to lose one's enthusiasm and motivation in an atmosphere where leading intellectuals continue to question environmentalists' and scientists' fact-based research on global warming and carbon emissions.

A question of global security

Egypt, like the entire Middle East region, needs to be prepared for the challenges environmental pollution poses, emphasises Munqeth Mehyar, the director of Friends of the Earth Middle East (FoEME).

"Being left unprepared will affect not only economic, physical and environmental security, but also national, regional and global security if actions are not taken now to mitigate and adapt to the projected impacts of climate change," Mehyar says.

One of the major stumbling blocks to promoting environmental awareness in Egypt is of course the country's educational system. As Brian Whitaker has shown in his excellent study "What's Really Wrong with the Middle East", school curricula in Egypt foster only rote learning. Concepts like civic responsibility or ecological sustainability have no room in a society that has a traditional authoritarian approach to education. Egypt will have a hard time producing the "movers and makers" or innovative minds that will come up with solutions to the ever more pressing environmental problems.

Nonetheless, Egypt does have a rather active civil society in other respects . Despite the difficult societal and political environment, there are literally hundreds of NGOs in Cairo alone, enthusiastically dedicated to their various causes and increasingly effecting real change. For instance, the Hurghada Environmental Protection and Conversation Agency recently proudly announced that Carrefour Egypt have confirmed that they have stopped selling shark meat in their stores. So maybe there is still hope.

Joseph Mayton is an American journalist based in Cairo, Egypt. He is currently working on a book about the Muslim Brotherhood and is founder/editor of Bikya Masr website.

Urban Planning in Cairo
Cultural Sustainability for Egypt's Capital
Cairo's inhabitants respectfully call their city the "Mother of the World". The magacity, however, is bursting at the seams and about to explode. Now an ifa Gallery exhibition is showcasing five projects that offer ambitious solutions to the city's problems. Abdul-Ahmad Rashid reports

Islam, Environment and Sustainability
"The Environmental Crisis is also a Spiritual Crisis"
For some years now a global environmental discourse has been underway, one that connects ecological themes with Islamic ethics. But to what extent can Islam really give us guidance on ecological sustainability? Eren Güvercin seeks answers from expert Sigrid Nökel

Islam and Development Cooperation
Environmental Protection through the Koran?
Governmental and non-governmental development aid organizations must define the values and goals they share with Muslim partners. But how important is it to refer to Islam in development projects in order to guarantee success? By Martina Sabra

END_OF_DOCUMENT_TOKEN_TO_BE_REPLACED
Social media
and networks
Subscribe to our
newsletter